A Venetian lesson for the Lion of Hindustan 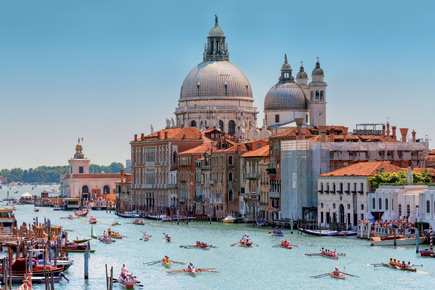 
Venice reminds visitors that prosperity knows no religion. Neither does good governance. Other impulses shaped the Byzantine, Ottoman, Napoleonic and British empires whose tides also washed over the eastern Mediterranean, but Venice claimed no imperial mission. It exported no ideology. It did not even crave territory. Only the urge to become rich created La Serenissima, The Most Serene Republic of Venice. The young Bangladeshi men scattering fragments of coloured light from Chinese-made torches that they sell in Venice’s Piazza San Marco are the latest to testify to that spirit of commercial enterprise.

Napoleon allegedly called the piazza the ‘finest drawing- room in Europe’. Venetians see it as the centre of the world. Unerringly hitting on the truth in their untutored innocence, the Bangladeshi boys know that a paved vastness surrounded by arcades of glittering shops can only be a marketplace. “You have a new government in India?” one of them, a lad from Kishorganj, asked me. He hadn’t heard of that famous son of Kishorganj, Nirad C Chaudhuri. Narendra Modi’s name meant nothing to him either. But a garbled rumour had reached his ears that India’s new political leader “doesn’t like us Bangladeshis”. This new leader, he believed, had vowed to send back even Hindus who had migrated to India from Bangladesh.

Another Bangladeshi presented a more sophisticated assessment. “Your election results have been accepted. Ours haven’t. That means more instability,” he bemoaned, referring to the battle of the begums 6,000 miles away. A European family stopped just then to ask about the kaleidoscopic lights and I retreated. Even a Bengali adda must yield precedence to the market in Venice.

Neither Bangladeshi had any inkling of the appositeness of the conversation in the shadow of the pink façade of the Doge’s Palace above the Grand Canal. The world’s longest lasting republic— 1,100 years from 697 to 1797—has much to teach the world’s largest democracy. True, the Venetian Republic reserved high office for only noblemen, but that didn’t mean an archaic order of hereditary privilege. Venice’s nobility was a vibrant commercial elite. Whenever La Serenissima ran short of funds, it updated theprecious Golden Book of the nobility so that munificent donors could be added to the existing lords and counts. With the canny sense of all traders, Venice sold titles long before Lloyd George in England. Today’s bania could be tomorrow’s Baron.

Every Venetian, Pope Pius II wrote snobbishly in the fifteenth century when Venice was at the height of imperial glory, was a slave to ‘the sordid occupations of trade’. One sees overwhelming evidence of this triumph in room after painted room of the Doge’s Palace. In their ermine robes and bejewelled velvet caps, the Doges comported themselves like monarchs. But they knew they were kings in a truer sense. They were millionaire businessmen elected to the highest office in the modern world’s first republic.

Being sturdy democrats, Venetians wanted no hereditary oligarchy. They took care to elect only old men so that their reigns were necessarily short, thereby eliminating the need for cumbersome ombudsmen and impeachment procedures. A Doge who was so infirm as to fall out of his throne was preferable to the young sprig of an entrenched dynasty. The fifty-fifth Doge who did try to perpetuate his rule was beheaded in the Piazza San Marco. Today, a black shroud painted over his portrait in the Palace’s Sala del Maggior Consiglio (Hall of the Great Council) warns populist rulers everywhere of the peril of trying to bend the rules to serve their authoritarianism.

Other huge murals of Ottoman pashas in onion-shaped turbans (Mahmud II replaced the turban in 1825 with the fez as a symbol of modernity, but it, too, was banned in turn in 1925 by Kemal Ataturk) are a reminder of interaction across religious lines. Pragmatism is never a prisoner of bigotry. Even while fighting the Turks, Venice kept open her trading posts in Ottoman-ruled Syria and Egypt. She also allowed Turkish merchants to set up their own business centre on the Grand Canal.

I was told of an occasion in 1464 when the fiercely Christian Knights of St John seized some Muslim passengers from a Venetian ship at Rhodes. Hearing of the outrage, Venice at once sent a fleet to rescue them. The Knights had no option but to hand over the Muslims who were then safely returned to the Turkish authorities in Alexandria. La Serenissima understood that even religious adversaries must be protected not only in the interests of mercantile prosperity and good governance but for the sake of the administration’s own reputation. Venice projected herself to the West as Christendom’s fervent champion in the eastern Mediterranean. But she knew that within her own sphere of influence—and that extended beyond the Adriatic to Greece, Asia Minor and North Africa—she needed Islam for trade and survival.

Venice was similarly hospitable to gypsies—distant children of India, better known today as Roma—because of their skill at horse-breeding, and to Jews because of their scholarship and financial acumen. Jan Morris writes in The Venetian Empire: A Sea Voyage, ‘Nobody mourned the fall of Venice more than the Jews of Corfu, and with reason, for never again, under any successor government, did they achieve such power and prosperity; and in the end the worst of all the empires, arriving similarly out of the north, took them away and killed them. To the end their vernacular remained the Venetian dialect of Italian.’

Despite being hereditary Caliphs of Islam and the Shadow of God on Earth, the Ottoman Sultans could display similar secular enlightenment for the public good. When Catholic Spain expelled Jews after the Moorish kingdom of Granada surrendered in 1492, it was the Sultan who sent a fleet of ships to rescue them so that they could settle down in his empire. That was a full 150 years before Britain, which had expelled Jews in 1290, allowed them back again.

If religion didn’t make for eternal enmity, neither did it make for permanent friendship. Venice had no scruples about participating in the Crusades that attacked Christian Byzantium and gobbling up what she could of the fallen empire. The Doge even adopted the grandiloquent title ‘Lord of a Quarter and a Half- Quarter of the Roman Empire.’ So, my Bangladeshi acquaintance in Venice may not have been so far-fetched after all in believing that Modi would evict Hindu refugees! But a gem-studded Mughal throne in Istanbul’s Topkapi Palace—an oriental masnad, very unlike the stiff emerald-encrusted chair I was once shown in Teheran’s treasury as Shah Jehan’s Peacock Throne—provided the most evocative instance of the failure of religion to create political unity. Nadir Shah, who looted India, probably presented the throne in the Topkapi Palace to the Ottoman Sultan Mahmud I.

His ill-gotten wealth allowed Nadir Shah to exempt his Persian subjects from taxes for three years. History records that thousands of elephants, horses and camels were laden with his plunder, which included the Peacock Throne and the Koh-i- Noor and Darya-ye Noor diamonds that are now among the British and Iranian Crown jewels. No wonder Muhammad Shah, the defeated, disgraced and blinded twelfth Mughal emperor who had been forced to cede territory west of the Indus to Persia, befriended the Ottoman ambassador, Haji Yusuf; and then readily promised help when Mahmud I declared war on Persia. Two Muslim potentates, the Mughal and Ottoman emperors, united against a third, the Shah of Persia.

Not that relations between Mughals and Ottomans had always been cordial. Naimur Rahman Farooqi’s excellent Mughal-Ottoman relations: a study of political and diplomatic relations between Mughal India and the Ottoman Empire, 1556-1748 describes the fracas when Akbar’s womenfolk went on Haj. ‘Akbar’s religious attitude seems to have scandalised the whole world of Islam,’ Farooqi wrote. So did the ultra- modern Mughal ladies. Incensed at their expulsion, Akbar stopped sending funds, stopped Hajj caravans to the Hijaz, broke relations with the Sharif of Mecca, considered a Portuguese alliance against the Ottomans, and even had an Ottoman governor put in chains. ‘The reason for this is said to have been his resentment at the arrogance of the ambassadors themselves and the king who sent them’ wrote the observer, Father Monserrate. Akbar also refused an Uzbek proposal for a triple alliance with the Ottomans against Persia.

His ecumenism may have influenced Akbar’s attitude towards the Ottomans and Persians to some extent, but a more likely explanation lies in his mature grasp of statecraft. The ummah mattered, but like the ancient Venetians, Akbar knew that the economic well-being and political happiness of his subjects demanded an inclusive policy. His great-grandson’s inability to appreciate this and take a holistic view of his responsibilities sounded the death knell for the empire of the Mughals. India could once again suffer fractious strife if the man who has been hailed as Hindustan ka sher fails like Aurangzeb to understand that secularism is not an abstraction. It is an active instrument of governance to nourish the diversity that makes India great.