Why Shillong Flips for WWII Jeeps

The Second World War years linger in this hill town in strange ways, and none more unusual than in its abiding fondness for Willys jeeps 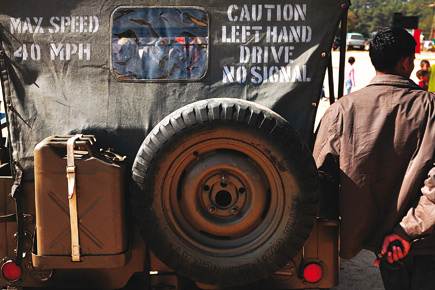 The Second World War years linger in this hill town in strange ways, and none more unusual than in its abiding fondness for Willys jeeps


She’s sixty-nine years old, and recently covered 329 km from Shillong in Meghalaya to Dimapur in Nagaland without a hitch. In fact, she was even part of the rally’s winning team. Meet Ashok Lyngdoh’s pristine 1942-model Willys jeep, which he lovingly refers to as part of the family. “Even her siren works,” he tells me, joyfully cranking it up. His enthusiasm for World War II antiques spills over into other things. His house is a veritable museum. On the table lies an American Army plate and meat skewer, on my lap is the helmet of an unknown British soldier, in the porch is parked a 1941-model BSA motorbike in mid-restoration. These items were scattered in and around Shillong during its ‘war years’.

After the spring of 1942, when Japan attacked Burma and ousted the British, this sleepy little town was transformed into a bustling convalescence base for Allied soldiers on the Burma front. The then capital of Assam (which included Meghalaya, Mizoram and Nagaland), Shillong was chosen for its mild weather, general prettiness and its relative accessibility from Guwahati. It was also not without any military standing, being the headquarters of some Gurkha units as well as the Assam Regiment (famous for stalling the Japanese army at Kharasom and Jessami in March 1944). Soldiers headed there for much-needed rest and relaxation, to recover from months at the front or bouts of malaria and black water fever. The British set up makeshift camps near Nongrim Hills, while Americans (far  better paid than their allies) hired bungalows all over town. There was plenty to keep them busy—dances at Shillong Club, Kelsalls, and Pine Wood, movies at Kelvin and Garrison cinema halls, swimming at Crinoline Falls, among other things. Singer Dame Vera Lynn, fondly known as the ‘Forces’ Sweetheart’ visited in 1944, while English football and cricketing legend Dennis Compton played with the troops at Polo Ground. Also special was the interaction between the troops and the locals. Bah Harvey Diengdoh, an 88-year-old writer and musician, speaks to me of his elder brother, Osborne, a member of the Royal Army Medical Corp. “He had two Scottish soldier friends. They’d all get merry in the evening and sing Bonny Banks of Loch Lomond.”

Despite this taking place over 60 years ago, the legacy of the war lingers on in Shillong in the most unusual ways. In the nar aeroplane (metal used to create landing strips in the Northeast jungles) that lines the footpaths of houses, the helmets used as flower pots, the ghost stories that haunt the corridors of Loreto Convent and St Edmund’s (schools used as military hospitals), the children who carry traces of ‘foreign’ genes in their blue eyes and freckled faces, in faded photographs that hang above fireplaces, and stories that people cradle and pass on. The war years still resound in Shillong. And none louder than in the drone of a Willys engine.

In 1942, after the Japanese attack on Pearl Harbour and America’s subsequent entry into the War, the US Army’s Quarter Master Corp sanctioned the order for a ‘field’ car, a light, 4-wheel-drive, multi-purpose, all-terrain vehicle that could traverse rough, unpaved territory. Combining elements of various pre-war prototypes, a standard vehicle was designed by Willys Overland, which only Ford was capable of manufacturing in the thousands. General Purpose Willys (GPWs) vehicles were shipped across the world to all arenas of war—Africa, Europe, the Pacific and Burma. My quest to understand the appeal of these jeeps first takes me to Kolkata, fitting perhaps as this was the place from where they were sent to the Northeast. Uday Bhan Singh is co-founder of Jeep Thrills, a group that brings together jeep-lovers from across the country and world. He lives in a rambling old place in Howrah, which has half a jeep lodged in the first floor wall of his house. It hangs over his porch like a surreal yet proud trophy. He has designed his life, he tells me, around doing what he loves—restoring World War II jeeps.

“I was brought up amid cars. We had a bus transport company. My father and uncle owned 1945-model GPWs. But of all the cars we had—Rolls-Royce, Cadillac, Chevrolet, Chrysler—I always fancied the jeeps. Of course,” he adds with a smile, “there was a ban on the others. We weren’t allowed to touch them, but jeeps were rough, tough. You could jump and play in them.” He uses the word “freedom” and I think we may have uncovered the core of why these vehicles are loved.

If Singh’s house is surrounded by ‘a graveyard of rusted automobiles’ (to quote Arlo Guthrie), then Shillong is an actual burial ground. After the War ended in 1945, jeeps, along with other military equipment (often even livestock), were buried in various places in the outskirts of town. The DC gave permission for locals to ‘cannibalise’ this buried treasure and reuse the metal; yet whole vehicles survived, some given away by the troops as gratuity or payment for debts owed. Although there are plenty of post-War and Mahindra jeeps in Shillong, some four restored GPWs originals survive in town today. Yes, this love of jeeps is about “freedom”, says Ashok, but not only in the easy rider, open road kind of way. It wasn’t even, as I’d believed, so much about masculinity. “What the horse was to the Wild West, the jeep was to the Northeast,” he says. “If you look at connectivity throughout this region up to the War and early 50s, you had no roads. You had one road from Shillong to Guwahati, one up to Mawphlang, and it was jeeps that paved new dirt tracks that eventually became roads.” Apart from providing geographical links, the jeep also served to bring people together in other ways. “It was used as a bus, an ambulance, a taxi. It was used to carry plane sheets, farm produce and livestock,” explains Ashok. “It’s ironic how an instrument of war actually became an instrument of peace. It became something that brought about the development of this entire area. And this is perhaps the reason why people here have this strong emotional attachment to the jeep.” There’s a lady, he continues, who, a few days after she was born, was taken in a jeep from Shillong to Nongkrem (where there were no roads). In honour of the vehicle, she was named Jeepsy.

Bah Wendell Passah, who Ashok calls his mentor, elaborates, “The jeeps would travel to and from various marketplaces in the Khasi and Jaintia Hills. Bazaars were held every week. Shillong was the centre from where these vehicles would go to Jowai, Dowki, Umroi, Laitlyngkot, Thadlaskein.” It was also fortunate, he says, that there was a dedicated group of civilians who’d trained as mechanics during the war years—“The people of the hills were quick to learn and good with their hands. They later turned drivers and also tended to the jeeps. We have workshops in Shillong with families of mechanics for two-three generations. Not only were jeeps used by our grandparents to travel, they provided us with a livelihood; naturally we feel strongly about them.” And this fondness still runs in their veins, no matter how far away they are from home. Sujan Deb, for example, who lives and works in Aberdeen, Scotland, shops for vehicle parts from junkyards in Shrewsbury, Shropshire and Derbyshire and mails them to Shillong, so he can restore the jeep he owns when he makes his annual two-week visit home. He has a long way to go, considering it has taken Ashok, Wendell and others almost a decade to restore their GPWs.

It’s easy to see why it would take that long and require this kind of dedication. GPWs are beautiful, intricate machines that infuse the term ‘multi-purpose’ with new meaning—the tyre rims are specially built to be towed on railway tracks; a shovel and axe fit neatly beside the driver’s seat; the headlights can be inverted to illuminate the engine; in case of a flat, the tyre tubes could be stuffed with skum (straw) and run for another 48 km; the dashboard lights are carefully diffused so snipers wouldn’t spot them; the brake wires are carefully enclosed to save them from wear and tear; the Jerrycans can carry not just petrol but soup and stew; the tyres could be lifted and hooked to a rubber belt that would help saw wood or churn laundry. “More than all that,” says Ashok, “they became extensions of the soldiers who slept, shaved, drank, ate and died in these vehicles. My jeep is a memorial to all of them.”

As a special treat, I’m taken on a jeep ride to Jowai, a town two hours away from Shillong. As we hit a traffic-free road winding down the hillside, warm winter sunshine on my back, I realise that sometimes there’s nothing like the wind in your face to lift the weight of history.