Why Sex is Divine 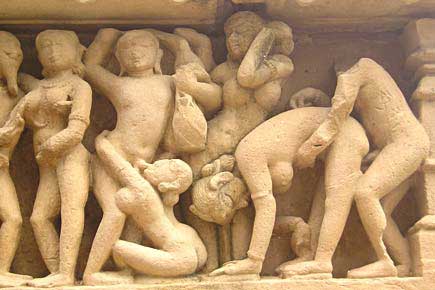 
If an identity could be shrugged off, many Indians would change the way the average Westerner perceives India. But some labels don’t come unstuck so easily.

In architecture-speak, the juncture wall holds special meaning as representing the union of two structural parts. Masterminds that they were, the architects of the temples chose to celebrate this significance by punning on the concept of union, by superimposing the wall with sculptures depicting the union of the male and female forms.

The concept of an intentional pun was first suggested by Michael Meister, W Norman Brown Professor of South Asia Studies in the Department of the History of Art at the University of Pennsylvania. He is a specialist in the art of South Asia and has primarily focused on temple architecture in the Indian Subcontinent. “It may seem facetious,” says Meister in his seminal paper ‘Juncture and Conjunction: Punning and Temple Architecture’, published in Artibus Asiae in 1979, “to suggest that placement of scenes of ritual copulation on walls which functionally are walls of architectural conjunction was an intentional pun, yet the iconography of certain images both at Khajuraho and on earlier temples would suggest that such a conjoining of meanings was indeed the case.”

Desai has used the forms of the figures and figurines flanking the couples in the lowest and middle row to interpret the sculptures as representing characters of an allegorical play staged at the court of the Chandelas, the dynasty under whose patronage the Khajuraho temples were built between 950 and 1150 AD.

In the play Prabodhachandrodaya, conflict between the royal forces of stepbrothers King Viveka (representing discrimination) and King Mahamoha (representing delusion) is resolved with the birth of King Viveka’s daughter Vidya (knowledge), who has the power to dissolve the opposing force. Subsequently, the birth of King Viveka’s son Prabodhachandra (moon of awakening) also serves to deliver the king’s grandfather, Purusha (man), from delusion into reality. Purusha, who had previously been deceived by the guiles of King Mahamoha, is enlightened of his true identity with Parmesvara (the Supreme).

The process of identifying the characters is as scientific as the interpretation of art can get, drawing as it does on symbolism that is typical to the Subcontinent. For instance, King Viveka is identified by the figurine of a freshly bathed beautiful damsel flanking his sculpture. She is shown arranging her wet hair, from which (invisible) falling water drops are drunk by the adjacent sculpture of a hansa (goose). The damsel represents Karpuramanjari, a female figure also found at the Kirtistambha at Chittorgarh and in the western Indian text Kshiranava. And in Indian culture, the goose symbolises the quality of discrimination (Viveka).

One sculpture hailed to be among the most outlandish sexual feats depicted is the head-down conjunction sculpture of the Kandariya Mahadeva temple, which Desai has interpreted as a disguised illustration of the Kamakala Yantra. This yantra, geometrically expressed as a triangle with its apex pointing downwards, is the Tantric symbol of Shiva and Shakti, that is, the emblem of the quintessential psychic union of male and female principles. The triangle symbolises creation, the abode of Shakti, the female element of the universe. The adjoining line is a symbol of Shiva, the masculine element of the universe.

As a whole, the head-down conjunction sculpture denotes the union of opposite polarities, or of masculine and feminine character traits, or of intellect and intuition. When seen in relation to its position on the juncture wall, both the sculpture and the juncture wall acquire deeper meaning.

A union, not external (read sexual), but of male and female character traits that are usually singularly present in human form is a prerequisite to go beyond. Enlightenment—so the creators of the temples of Khajuraho apparently thought—is but this state of inner completeness that enables communion with the Supreme (or oneness of life). Backtracking to the serene sage depicted in the samabhanga posture at the crest of the three rows of sculpture on another juncture wall, given the overall design of the sculptures, his equipoise may now also be understood to suggest a lot more than mere physical or external balance.

As the bridge between the material world represented by the congregation hall and the transcendental world represented by the sanctum sanctorum of the temple, the juncture wall becomes a marker of the contrast between ignorance and enlightenment. Hence, there arose a need to adorn it with characters caught up with the trappings of sensory perception as well as enlightened characters.

Of course, some critics are quick to counter this interpretation with the argument that the head-down conjunction sculpture symbolises ritualistic Tantric sex practised as a means to experience the ultimate liberation or unity of form. After all, Tantric customs prevailing at the time the temples of Khajuraho were built are known to have influenced concurrent forms of art. However, Desai supports her understanding with a description of the use of the Kamakala Yantra put forward in the text of the Orissan Silpa Prakasa, which is assigned to the same period when the temples of Khajuraho were created.

“The yantra,” explains Desai “is a prayer offered for the success of Shakti sadhana (worship of powers). It was said that evil spirits will flee away at the mere sight of the yantra, and hence it must be placed in the best temples dedicated to Shakti and to Rudra. Then, the monument would stand unmoved forever. However, it was also said that the yantra is an utter secret, and must be kept so. For this reason, it was suggested that a mithuna murti (scene of copulation) should be carved on the lines of the yantra. The kamabandha (erotic posture) was to be placed to give delight to people.”

Spirituality, the realm that professes to take us beyond the here and into the now, is thought to come in many hues in India, albeit orange, white and skin (literally) dominate its shade card. But colour is an attribute of matter. The spiritual life, which is always about going beyond the material world, is coloured by the company of the Supreme. And as any sanyasi would attest, that colour never fades.

Charu Bahri is a freelance writer and author of Sexual Dualism to Spiritual Oneness. Besides writing on diverse subjects, she enjoys working a few hours every day for a health charity. She lives in Mount Abu. More on her at www.charubahri.com