My City for a Poet

Shrikant Verma’s Magadh is brought to new life in Rahul Soni’s translucent translation. Reading it in modern-day ‘Magadh’ is a revelation 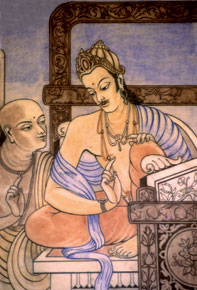 Shrikant Verma’s Magadh is brought to new life in Rahul Soni’s translucent translation. Reading it in modern-day ‘Magadh’ is a revelation


Having lived in a small town for most of my life, one of my sad grudges has been its inability to inspire any literature around its name. Siliguri was just Siliguri, nothing more; the geo-political nickname, ‘Chicken’s Neck’, didn’t help either. Reading Shrikant Verma’s Magadh in Rahul Soni’s brilliant translation, I was reminded of that disappointment again.

For though they may be collected under the title ‘Magadh’, Verma’s collection of poems is about Hastinapur and Kashi and Nalanda and Takshashila and Mathura and Pataliputra and Kannauj and Ujjaini and Amravati—and Magadh. In this, it answers once and for all the question: what is a city? No, do not call it a city if it cannot birth a poem. For what is Paris without its Baudelaire, Calcutta without its Sunil Ganguly, London without its Eliot? And so it is with Shrikant Verma’s Dilli—New Delhi, by any other name would be just as Magadh.

Sometimes riddle, sometimes aphorism, sometimes confusion, sometimes clarity—written from the place where language laboratory meets roadside dhaba colloquial, Verma’s poems are a sort of sequel to Chanakya’s Arthashastra, and were all written between 1979 and 1984, arguably one of the most turbulent periods in the history of post-Independence India.

The city is the state, as it was in the time of Socrates, the political philosopher to whom Magadh implicitly nods. What we call the Emergency, those tortuous months between 1975 and 1977 whose events colour our reading, is here the emergency of the Delhi city-state, its effects largely concentrated within its people. Delhi is India, and by extension, the world—a world.

Could anyone read these lines and not be reminded of Operation Blue Star, Indira Gandhi’s assassination and the violence unleashed on Sikhs?

‘The people of Magadh / are sorting the bones of the dead

Which ones are Ashoka’s? / And Chandragupta’s? / No, no, / these can’t be Bimbisara’s / they are Ajatashatru’s, / the people of Magadh say / shedding tears

Everywhere there are dead bodies, as if it was a poet’s vocation to be a writer of obituaries:

Reading Magadh, one is reminded of Cavafy’s words from The City—‘You’ll find no new places, you won’t find other shores / The city will follow you’—because there really is no escape from ‘the city’. You are a citizen no matter where you live, for you live your life by a city’s ‘customs’:

‘I say again / without dharma, there can be nothing – / but no one / listens to me. / It isn’t the custom to listen in Hastinapur–

You are a citizen because you elect people who ‘are either deaf/or have been appointed/to turn a deaf ear’. You are a citizen because your ancestors were, since the time of the Mahabharata, since the existence of Hastinapur. There is no other way. Is it not of our legislators that you are reminded when you read these words, when you repeat to yourself the line, ‘It isn’t the custom to listen in Hastinapur’?

In his foreword to the collection, Ashok Vajpeyi aptly calls it the ‘poetic of witness and complicity’. The last adjective he uses is ‘bipolar’—‘bipolar power’. It is of this bipolarity that I was continually reminded when certain line structures came my way:

‘All travellers going to Ujjaini: / this road does not go to Ujjaini / and this same road goes to Ujjaini

For humour, one might read this as the uncertain vacillation of political discourse in South Asian societies—where coalitions and rivalries change overnight, where today’s communism is tomorrow’s capitalism—but Verma’s words surely imply more than that.

It is socio-political philosophy made available in the rhythm of aphorisms yes, and also the unpredictable life of a traveller in city spaces—Verma’s world is a city, not a ‘global village’—where ‘one-way only’ routes change from time to time, literally and metaphorically. It is in passages like these that Verma’s words take on the character of everyday philosophy.

In writing about politics and rajneeti and the continual interface between them in post-Independence India, why did Verma choose the city—an ancient city, a mythical city, a historical city—as his central metaphor? Each page offers a new answer to that question.

What I take away from Verma is instinct, raw and rare in a poet; a poet’s instinct mixed with a sociologist’s cunning. For Magadh, the collection, is also an archive of madness, the madness of a community that goes by the name ‘politicians’; a madness that originates in narcissism and descends into zindabad and taali. Magadh is a folktale about the cities in Parliament:

‘Voices in Magadh say no rulers remain in Magadh / Those that were there / thanks to liquor, stupidity and laziness / are no longer / worthy / of being called / Magadh’s rulers’

Varma creates new sabhas, new houses in a parliamentary democracy, eventually setting up the bigger question: how does the State actualise our self, the self of a poet and the self of a reader of poetry?

The poet of Magadh is both slave and owner of Dilli because ‘Kosal is a republic only in the imagination’ and ‘The rajasuya is complete/you have become emperor’.

I rarely encounter the name ‘Magadh’ in English India. It creates an immediate shift in register, like entering your father’s ancestral house after emerging from an air-conditioned car. The last two times I encountered the name in English India were in a poem by Karthika Nair and an epigraph in Amitava Kumar’s book on Patna, A Matter of Rats.

Rahul Soni’s translation, sharp as freshly-cut paper, reserved in temper like old leaves, does the seemingly impossible: it carries two things intact—a sense of the original Hindi idiom and the claustrophobic political culture of the times. One need only look at the different drafts many of these poems went through that have appeared in literary journals over the last few years, each version bringing in something new—a word changed, a new one added, a line altered. You spot it early in the book, the translator’s love, adding translucence to the text.

A word about the book’s bilinguality: On the left page is Verma in Hindi, on the right Soni. It is a novel—and commendable—venture in a country that has an official three-tier language policy and a Sahitya Akademi that purportedly works between literatures in Indian languages, but where publishing is depressingly monolingual.

I have heard a few readers complain in a whisper about its lack of an introductory note (or perhaps annotations) about the circumstances—poetical and political—that led to Verma’s writing. While that desire may be justified, it is also true that the lack of ‘background knowledge’ gives the poems an aphoristic quality.

When I close my copy of the book, I wonder why there are no trees in Magadh; I see only statues in today’s Magadh and I wonder whether Magadh might have been banned by the new eye of censorship that operates today.

‘The crowd is saying in one voice– We Are happy! Maharaj, tell them the way they tell you– “My people! Stay happy”.’

Sumana Roy
Sumana Roy is an author and a poet. Her most recent work is a collection of poems Out of Syllabus