In Memory of Mayawati

If an etching of her presence on the template of history is what she wanted, that’s all she’ll have got at the end. Here’s how we’ll remember her 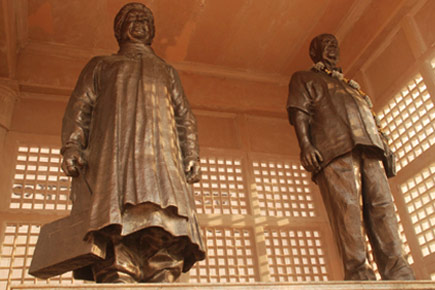 If she wanted to etch her presence on the template of history, that is all Mayawati will have got at the end. Here’s how we’ll remember her


In the small mandi town of Bilaspur in western Uttar Pradesh (UP), a small nondescript statue of Ambedkar was attacked by an angry mob of students some years ago. They were protesting the fact that those among them who had failed their exams were being kept from proceeding to the next class. (A reasonable demand in a system in which the buying and selling of diplomas flourishes.) The blue-suited statue, pink-faced with black-rimmed glasses, had withstood many such protests. But in the ensuing clash, someone knocked off Ambedkar’s nose. Within hours, a Dalit rage engulfed the small town, leaving many injured and a few dead. In an effort to quell the anger, the city administration quickly fixed the nose and—to keep the statue from further disfiguration—surrounded it with a steel cage, a structure so tightly welded that Ambedkar could barely peer out at his devotees.

The political dimension of memorials was apparent in the postures these figures were made to strike in stone—typically of the hectoring-from-a-high-pedestal kind. Of these, Mayawati in Lucknow took the prize for the most shrill and pushy form of public sculpture. Her loyal likeness appeared in virtually every public maidan, every respectable roundabout, and any place given to largescale public visibility. A larger-than-life Mayawati glared down the Bahujan Nayak Park. A bronze Mayawati stood at the Ambedkar Samajik Parivartan Sthal, the Rs 500 crore memorial to Ambedkar. At road intersections, there may have been no policemen, but four Mayawatis stood tall in bronze or stone; passersby saw her front, back and sides, all at once.

“I always felt that memorials should be built during the lifetime of icons,” Mayawati once said without a hint of irony, “That is why I got the statue of my mentor Kanshi Ram installed in Lucknow during his lifetime. But because he wished that I should also have my own statue next to his, I decided to go ahead.”

The absence of statues in Dalit history provided Mayawati the star power of an idol. Here was a woman, a Dalit, who had taken centuries of oppression and turned it upside down. The oppressed still remained oppressed, but in symbolic terms they were riding the popular wave. Mayawati had pushed the Brahmins, the freedom fighters, the Nehrus, the Annie Besants off the pedestal, and without so much as testing her own political strength, proclaimed her power.

It took only a short drive around the streets of Lucknow to know that Mayawati was the new Gandhi. There she was—unlike a feeble Gandhi on the Dandi March, unlike an intellectual Ambedkar with his Constitution—handbag on her arm, gaze firmly fixed ahead, to a new future, her future. Her sculptor, Prajapati, had a set of standing instructions to always make her features convey an attitude of triumph. No double chin, no thick elephant neck, a bust less pronounced, and eyes focused on the distant horizon. To counter any ill-fated attacks on her nose, he was instructed to make her in unbreakable bronze. Working on an outsized piece for installation in Delhi once she became prime minister, Prajapati got an extended deadline after the 2009 election to work on his masterpiece.

It was Mahatma Gandhi who said that the poor imagine God in a loaf of bread. Till the election, the poor imagined God in Mayawati. And they forgave her excesses. Even when they had to pay bribes for a street cleaning job, aware that this was what the fight was against; even when they were denied a water connection in their colony, knowing full well that the water was being directed to fountains at her memorials. It didn’t matter. Mayawati was a sister, a Dalit, oppressed for a thousand years. And now, by becoming just another politician, she was merely correcting the course of history.

A government clerk’s daughter, for many, Mayawati was the Indian Obama. Similar portraits of the two appeared in magazines: Obama under the looming shadow of Abraham Lincoln at the monument in Washington: men of ideas, statesmen like, whose lives had become entwined by political concerns and ideology. In her own portrait, Mayawati likewise stood under a statue of Ambedkar, seated ironically in the Lincoln pose. Clutching her handbag, she offered the same visual presence as the American president—confident, pensive and caring. But within seconds, her personal life of acquisitions—monuments built, houses bought, helicopters leased, diamond jewellery hoarded, extortion wealth amassed—came looming into the frame, and quickly wrecked any and all of the small insignificant Dalit victories that may have come to pass.

Reporters and journalists who questioned her on development and rural reform left her with no option but answer by unveiling more statues of herself. A monumental memorial was soon to be unveiled on the outskirts of Delhi. Others were being planned in towns all across her state. It was Mayawati’s way of scoring a point and letting everyone know that if there are enough visible signs of her presence, the poor will take care of themselves. Sure, in district schools there were no teachers, in many, no blackboards; in most, no students either. In rural health clinics, the appointed doctors never left Lucknow; some village community centres had TVs but no electricity. So what?

Indeed, when the state’s entire housing budget could be directed towards statues, who could question her on something as laughable as disproportionate assets? How silly the Taj Corridor case sounded when billions were spent on rows of stone elephants, her party’s mascot. But when the list of grievances grew long, everyone knew the only recourse was comic relief: to laugh as loudly as possible in the face of unrelenting tragedy; to forget that the tragedy ever happened. And force people to look away when it does.