Malls in India offer expats a disturbing comfort of familiarity 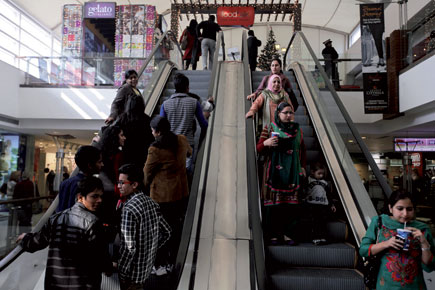 Malls in India offer expats a disturbing comfort of familiarity


Malls in India offer expats a disturbing comfort of familiarity

I vaguely remember a Disney cartoon I used to watch in early childhood called Crazy from the Heat, where Donald Duck and Goofy get lost in the desert after their car breaks down. (Why a duck and a dog might be driving in the Sahara Desert is not a question I will address here.) Stoned by the sun, our anthropomorphic heroes encounter a detail-infused mirage called the Oasis Soda Fountain at which the thirst-maddened Goofy consumes several illusory root beers before being forced to clean dishes at knifepoint by an ominous-looking Arab stereotype. In the world of this cartoon, of course, none of this exists. Not the pleasure of the root beer. Not the threat of xenophobia. These things are just representations of Goofy’s primary emotions at that moment—fear and desire.

The closest thing I have ever had to my own Oasis Soda Fountain is the Oberoi Mall in Mumbai. The Oberoi, situated in the Goregaon East neighbourhood on the southeast corner of where Film City road meets a flyover (and conveniently tucked right next door to my current flat), is a simultaneously beautiful and horrible mirage— a purified monument to capitalist escapism. If I’m fed up with being an expat, a writer, or simply being shaken down by taxiwalas, I can always count on the Oberoi’s cool, synthetic interior to erase my mind, and suck me into its delightful mind-melting core.

If you have never visited the Oberoi, it could best be described as a large air-conditioned cube of glass. Inside this cube, you will find four floors of shops, the top of which boasts a somewhat undisciplined looking food court, a thali place, an Indo-Chinese place, a movie theatre, a bookstore (where I will likely purchase this issue of Open upon its publication), and a Pizza Hut that inexplicably purports itself to be a legitimate dine-in Italian restaurant. In short, every big city neighbourhood in India has something similar today— but this one is mine.

When I first moved to this country and lived in the chaotic Delhi suburb of Haryana’s Gurgaon, the MGF mall (the cleaner one of two malls that straddle the MG Road Metro stop) served a similar purpose. I would feel homesick at Thanksgiving or Christmas, check in to the MGF, buy tickets to the most inane Hollywood blockbuster I could find, perhaps something directed by Michael Bay, suck a soda, and then ride the Yellow Line back to the Guru Dronacharya stop, thoughtless and amused.

Malls are carefully designed to be this seductive. And in almost every meaningful way, I ought to represent the last line of defence against their very existence. Politically and spiritually, they offend me greatly. When

Starbucks opened at the Oberoi Mall a few months ago, and lines stretched around the corner, I felt like I ought to somehow vomit sheets of blood across the floor in order to scare people away from it. For one thing, Starbucks is reportedly paying its Indian employees very small wages. For another, its coffee tastes like liquid cardboard. But now that the lines have subsided, and Starbucks is no more special than McDonald’s, I have my precious Oberoi back. I still don’t buy coffee there, but I don’t have to. Like everything else in the mall, I see its neon logo and feel comfortably numb.

The late French cultural theorist Jean Baudrillard said of shopping malls that they synthesise “all consumer activities, not least of which are shopping, flirting with objects, idle wandering, and all the permutations of these”.

As I am a frugal person, and detest spending money on things that will not get me drunk, only flirting with objects and idle wandering should appeal to me in this case. But it doesn’t seem like enough to explain my fixation with the Oberoi. And while I occasionally went to malls in America (the Roosevelt Field Mall in Long Island near where I grew up comes to mind, as does the Coralville Mall in Iowa where I did my Masters), it is here in India that I noticed these places forming an integral part of my perverse psyche.

The reason for that is twofold: 1) I miss my home country, and 2) I take pleasure in watching future Indian history unfolding in real time. (Even if that future history strikes me as a distinctly bad one.)

As depressing as this might sound to you, a shopping mall is the closest approximation to my own country as I can find on foreign soil. Like the many Indians who congregate around stores called ‘Subzi Mandi Cash n’ Carry’ in Edison, New Jersey, thrusting bags of Parle-G biscuits into the air like small trophies, I too desire a material connection to my place of origin. And what could be more American than sipping a Coke through a red-and-white straw while staring at a poster of some starlet’s airbrushed cleavage? The answer, sadly, is not very much.

The first indoor shopping mall was probably created in Cleveland, Ohio, and the entire mall ‘culture’ (if we can use that word in this context with any degree of seriousness) was arguably created in every American suburb from Orange County, California, to Vienna, Virginia. It used to be that that culture was met face to face with an equally powerful, antagonistic, American subculture of serious-minded artists and thinkers, but through the years, I worry more and more that that battle has been lost. It’s not that an alternative to multiplex, fast food ‘culture’ doesn’t exist in America, it’s just that it no longer offers any real hope of supplanting its rival. Maybe one day, America will simply extend a dome over itself, pump in some air-conditioning, and call it a night.

But regarding India: a lot has been made in the last decade of India’s burgeoning middle-class, and nowhere is it more apparent than in its popular shopping malls. The first time I waited behind two aunties paralysed at the foot of a moving escalator, I was sure that these good sisters had mistakenly taken too much bhang. But upon further examination, I realised that these women had never seen an escalator before in their lives. Now I’m accustomed to witnessing this same occurrence at least once every other week. Someone, having never experienced an escalator, stands at the foot of it, stares down its forbidding slope, paralysed with terror, and doesn’t know what to do. As a person who grew up riding escalators shortly after I could crawl, the effect the sight has on me is always both heartwarming and surreal.

But as an American who is highly critical of my own country’s failures, I can’t help but be saddened as I wonder where that escalator really leads India. A friend of mine from New York recently visited me here, and although I’m pretty sure he was mostly charmed by his stay, he still vocalised the truism that my brain softly repeats to itself every day, “Every place in the world is the same now, anyway”, shortly after visiting the Oberoi Mall.

India adds its distinct touches to the American capitalist experience, of course. The fast food chaat stalls are proof of that, as are the plastic Diwali lamps that are brought out front in early November. The life-size Shah Rukh Khan watch ads claim a completely independent dependence on the lives of celebrities, and the ice-cream stands are built to replicate the unique experience of Mumbai street vendors, while providing a decreased risk of catching amoebiasis. But in the end, these things are only a commodification of human life in this country. And life as a commodity, as with Goofy’s mirage, does not technically exist. It’s simply a representation of our desire for a break from the hurdles of daily life, and our awe-inspiring fear of a thing bigger and more powerful than us—money.

Even as I write these pessimistic words, I am already planning my next visit to the Oberoi Mall. I can’t help it. I’ll be there tomorrow, if not sooner, allowing its inherent numbness to wash over me like gentle rainwater. So, if you ever go shopping in Goregaon East, and you see a firang wearing big glasses, drifting aimlessly down an escalator, sipping a soda, or perhaps even editing a story while eating dahi puri, feel free to tap me on the shoulder to say ‘hello’.

Just don’t expect me to wake up.