Elvis, all ye mortals, was obviously an alien with superpowers. This explains everything, from his remarkable music to the crazy love he inspired. On his 75th year, Open calls for the King to rejoin his people. 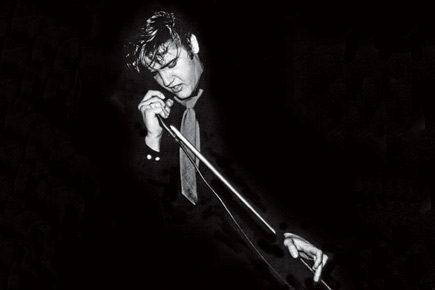 On his 75th year, Open calls for the King to rejoin his people.


My mother used to love Elvis with a passion that was deep and sincere, probably more than she loved me—something that I find perfectly understandable on a variety of levels. So did yours, most probably. Thousands and thousands of mothers lucky enough to be in Las Vegas between 1969 and 1977 threw their panties at him every night. In a spirit of scientific investigation and in order to get into the mood for this piece, I tried to do the same thing in the privacy of my own room, and I can assure you that it’s not an easy thing to do. It needs extreme motivation and considerable flexibility.

What could possibly explain such inexplicable devotion? If you think about it, it’s blindingly obvious. Elvis was an alien. Like Superman, his unearthly origin bestowed upon him superpowers barely comprehensible to mere mortals like us. Once you accept this, so many parts of the jigsaw puzzle suddenly fall into place. You gain new respect for estimable publications like the National Enquirer, whose frequent reports of Elvis broadcasting from Pluto, Elvis descending from flying saucers, and Elvis being spotted in the company of three-headed cows, John F Kennedy and, more recently, Michael Jackson now assume a whole new significance. Instead of mocking them, we should congratulate them on their brilliant feats of investigative journalism. While their facts are correct, their analysis is slightly flawed. These are not acts of alien abduction. No, it’s just that the King has gone back to join his own people, but occasionally he misses us, so he can’t help coming back.

Consider the facts. He was born in 1935, and his twin brother Jesse was stillborn. People privately doubted his claims that he was in communication with him throughout his life, but obviously Jesse must have gone straight back to the mother ship, but stayed in touch telepathically. Elvis came from an unlikely background for a King, a dirt poor Southern family with nothing but love to hold them together. His dad Vernon built their shack with his own hands and was arrested for forging a $5 cheque when Elvis was two. In an environment where White boys were taught to abhor Black music, Elvis used to sneak in to listen to BB King playing on Beale Street, and enjoyed gospel nights at the Memphis Auditorium. BB King still remembers him from those days, because first, he was White, and second, he was so goodlooking he hardly seemed human. No one taught him how to do his hair—the ducktail and the sideburns were entirely his own invention, and no one in high school could ever make him change them.

Once he decided to become a singer, in 1955, he struggled for approximately half an hour. The first few songs he sang at Sam Phillips’ little recording studio sounded a little stilted, so Sam told him to loosen up. At which point, Elvis stopped trying to be like Bing Crosby, picked up a guitar, did That’s All Right (Mama), and pretty much blew everyone away. He continued to blow them away from practically the first time he got on stage, and never stopped doing so until the day he died. His hips quickly took on a life of their own, despite repeated warnings from the local police (I am not making this up), and a compromise was reached in the early years by ordering cameramen to shoot him strictly above the waist.

In 1956, between March and September, he did Heartbreak Hotel, Blue Suede Shoes, Mystery Train, Hound Dog and Don’t Be Cruel, and single-handedly created rock’n’roll as we know it. He also did Love Me Tender, just to show that he could. The National Guard was called out to control the crowd at a concert in Alabama. A deejay in San Francisco was fired for playing Love Me Tender 14 times in a row. And Elvis bought his first pink Cadillac, thus turning it into an enduring American icon.

He was drafted by the US Army in 1958, and to the astonishment of almost everyone, he joined, since he thought it was his patriotic duty. He was an exemplary soldier, rising to the rank of sergeant, and receiving an honourable discharge in 1960. He never sang a note in public during that time. Within a month of leaving the army, he released Jailhouse Rock. In fact, in that one year, he released three albums, Jailhouse Rock, GI Blues and his first gospel album, His Hand In Mine, which went on to win a Grammy, and is still considered to be one of the best gospel albums. He recorded 16 songs for His Hand In Mine on one day, 30 September 1960. If you don’t think that’s superhuman, consider the fact that Queen took six months to record Bohemian Rhapsody.

During the same period and, in fact, till 1969, he was doing an average of three movies a year, each of which was knocked off in two to three weeks, because his manager Colonel Parker really needed the money. This is the same Parker who never let Elvis do a concert outside the US, because Parker was an illegal alien, and he was afraid they wouldn’t let him back in. He also renegotiated his contract with Elvis in 1972 so that he got 50 per cent (!) of his earnings, because, as he famously said, “I have to earn a living too.” Despite being extraterrestrial, Elvis always listened to Parker, because he didn’t want to blow his cover as a good, decent Southern boy. Once you realise this, his actions become perfectly understandable.

Parker was always testing the limits of the King’s superpowers. He put him in truly terrible movies like Kid Galahad and Flaming Star, and when that didn’t drive the public away, he put him in even worse ones like Roustabout and Harum Scarum. Elvis never said a word, displaying a loyalty that was clearly inhuman. Despite all this, he had sold 50 million records by 1963. By 1967, he had hit 100 million. He also hit Las Vegas, at which point some hints that he was related to ET began to emerge.

For one thing, there were the jumpsuits, which he designed himself, and loved because they were loose and flowing and expanded when he did. There were over 25 different designs, with names like American Eagle and Cherokee Brave. Sequin manufacturers across the globe owe him an eternal debt of gratitude.

Then there were the drugs. By 1970, while he was having seven or eight different types of prescription drugs three times a day, he keenly felt the proliferation of drug culture in the US. It was an issue he was very close to. So he met Richard Nixon, and asked him to make him a Federal Narcotics Agent. In a move for which Nixon has never been given sufficient credit, he agreed, and gave Elvis a free hand to apprehend drug addicts. Elvis, in turn, told his bodyguards to keep a sharp eye out for junkies, saying, “I’m tired of people like John Lennon talking about drugs. They’re demoralising our youth. They’re destroying our country. We’ve got to band together and stop this.”

It took his bodyguards some time to figure out that he was deadly serious. Despite their best efforts, though, they failed to apprehend anyone. It is obvious from this that by the early 1970s, we were failing to support the King in the way that we should have, and he was already leaving Planet Earth quite often, getting ready for the time when he would permanently shift to the mother ship. Further evidence emerged in 1975, when he met Eric Clapton. “What do you do?” the King asked Clapton. “I play guitar,” answered Clapton modestly. “Well, if you’d like some lessons,” replied Elvis, “Maybe my guitarist James Burton could give you some.” To his eternal credit, Clapton replied that he would be honoured. Also honoured were Led Zeppelin and George Harrison, who met him during this richly bizarre phase of his life, and showed him nothing but the greatest possible respect and affection.

Had Elvis been a normal human being, the years of drug abuse would have taken their toll. So he staged his departure very carefully. The last words he ever uttered to us earthlings were to his girlfriend in 1977. He said, “Okay, I won’t”, because she told him not to fall asleep in the bathroom. What appeared to be his dead body was discovered some hours later.

You could say that his achievements were colossal, and that no one has ever brought more joy to more people than he did. Perhaps we should not disturb him while he is resting. But today, in his 75th year, as Jason Mraz takes centrestage and Bono hobnobs with Ban Ki Moon, I think we have to align those transmitters and send this message straight to the heart of the Milky Way: ‘Come back, Elvis, our once and future King. We need you more than ever. We will try to be more worthy this time.’