The Truth About Tuticorin

Polluters must pay, but still... 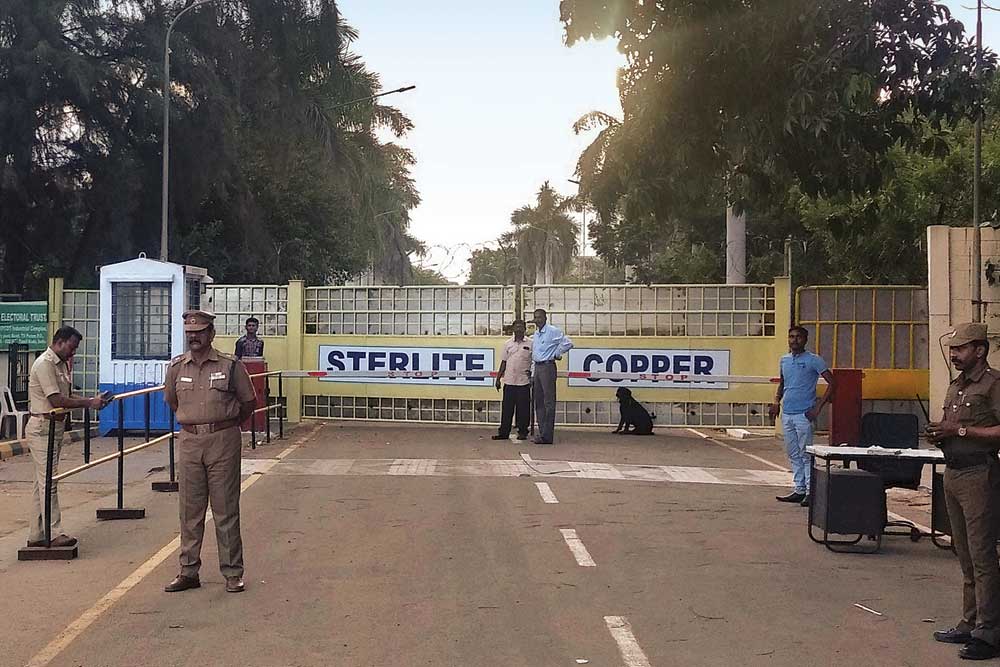 SMOKE AROSE IN the sky from gunfire as the trigger-happy policemen took aim. Thirteen people died, while nearly 102 protestors and 34 police personnel were injured. A special deputy tehsildar claims he ordered the firing to save lives and property at the Collector’s office since more than 10,000 people were marching towards the premises with deadly weapons. Tear gas and a lathi charge failed to disperse them, he says, so they resorted to bullets. Maybe, but shooting to kill? Was it necessary? Surely, a few shots in the air or a few arrests would have sufficed.

Tuticorin or Thoothukudi is a port and industrial city in southern Tamil Nadu. According to the Confederation of Indian Industry (CII), it has the state’s second-highest score on the Human Development Index after Chennai. Most of Tuticorin’s people have traditionally lived off the sea, either as fishermen or employed in the salt pans. There are 21 islands between Tuticorin and Rameswaram in the region known as Gulf of Mannar, India’s first Marine Biosphere Reserve, also called Gulf of Mannar Marine National Park.

Historically, it was known as the Pearl City, thanks to its famous pearl fisheries. Its sea port has a history dating back to the sixth century, and it has been ruled by various dynasties of Tamil Nadu and such colonial powers as the Portuguese, Dutch and British. Tuticorin was known as Korkai to the geographer Ptolemy and had trade relations with the Roman Empire. Periplus of the Erythraean Sea says that Korkai was a part of a kingdom of the Pandyas. In more recent times, it has been better known for VO Chidambaram Pillai, a great national leader who established the first Indian steam navigation company.

This ancient city has now become famous for its pollution, mob anger and police brutality. A broad protest began with the establishment of an industrial estate in 1994 that locals objected to. But it was the arrival of Sterlite Industries Ltd, a unit of the UK-based Vedanta Resources, that has been a thorn in the lives of the people of Tuticorin. Sterlite’s copper smelting plant was to come up in Ratnagiri, Maharashtra, in 1992. However, the Collector of Ratnagiri asked the company to suspend its plan in response to an intense local protest, and the project was shifted to Tuticorin after clearances were obtained from the Central and state governments. The foundation stone for the plant was laid in 1994, and an anti-Sterlite movement started the same year. The company received its licence to start in 1996, but was resisted that year by 500 fishermen who did not let a cargo ship carrying raw material for the plant enter the port. The ship was re-routed to Cochin and the material was transported by road to Tuticorin. Production began in 1997. However, the following year, the Madras High Court ordered the company to close the smelter. The court modified its ruling later and the National Environmental Engineering Research Institute was asked to conduct a study.

Sterlite has repeatedly been accused by activists of violating pollution norms and causing cancer and other diseases in the area. The protestors allege high levels of ground water pollution. The plant boasts of five effluent treatment plants with zero liquid effluent discharge, but emissions are still said to be harming the water. In 2010, the Madras High Court ordered it shut again, but three years later, the ruling was set aside by the Supreme Court under the Air and Water Acts, and Sterlite was permitted to continue production. The company was, however, told to pay Rs 100 crore in compensation for the damage caused. The plant was shut for some time in 2013 on allegations that a ‘toxic’ gas leak had caused breathing, throat and eye problems among residents in the area. The authorities, however, failed to prove this charge as there are several other industrial units in the area, any of which could have caused the pollution.

The problem in India is poor implementation of laws and lack of transparency. The Pollution Control Board’s readings should have been made public, whether they were for or against Sterlite. The company should publicly disclose its technology and say where else, apart from India, it is in use

Since early this year, Tuticorin residents have been on a sustained agitation, demanding permanent closure of the smelter and protesting against its expansion plan to raise capacity from 400,000 to 800,000 tonnes of copper per year. Sterlite already has an estimated 40 per cent of India’s copper installed capacity.

In April, the Tamil Nadu Pollution Control Board, which had permitted the plant to function, suddenly revoked its licence to operate. The Board also accused Sterlite of letting copper slag enter a river and not furnishing ground water reports. The Madras High Court has since restrained it from increasing capacity.

The village most severely affected is Kumareddiyapuram. With the permission of the Board, Sterlite had sold the plant’s copper slag to a local who used it as landfill. Unfortunately, the slag leached into the river. Such contamination tends to reach all the ground water around, with adverse consequences for aquatic life. Fishermen are angry since the fly ash is dumped in areas where baby prawns were generally harvested, resulting in the disappearance of prawns and other fish varieties. Salt manufacturers object to the plant because the SPM affects the quality of salt. While the air pollution may not be Sterlite’s doing alone, activists allege that it uses shorter chimney stacks that harm the environment and are not permitted.

The agitation had been on for three months when suddenly, on May 22nd, 2018, something went horribly wrong. What had been a peaceful movement till then took an unruly turn as new protestors joined in and began moving towards the Collectorate. Barricades were broken and a girl was injured. Initially, the police fired teargas shells. However, once the crowd reached its destination, stones began being hurled at the police. In response, the men in uniform conducted a lathi charge. And then shots were fired at the crowd and all hell broke loose.

Who were the stone throwers? Why shoot to kill? Did Maoists infiltrate the crowd, as alleged? Why was the Church issuing statements? The protestors were mostly Christians, fishermen as well as environmentalists. What is their problem with Sterlite? Or was it just against the AIADMK, now in an informal alliance with the BJP in the state? Unfortunately, there was no leadership among the protestors. They had become a rampaging mob. But that does not pardon the police for shooting at unarmed people. Chief Minister EK Palaniswami has blamed ‘incitement’ by the opposition for the protest turning violent. In India, opposition parties love fishing in troubled waters.

The protestors were mostly Christians, fishermen as well as environmentalists. What is their problem with Sterlite? Or was it just against the AIADMK, now in an informal alliance with the BJP in the state? Unfortunately, there was no leadership among the protestors

While activists say Sterlite’s plant has caused considerable air and ground water pollution, the company has been denying this. It claims the plant adheres to NEERI’s suggestions and the Supreme Court’s rulings, and, in future, would conform to the Bench Mark Study by International Finance Corporation (IFC).

Under a stipulation of the Ministry of Environment and Forests, the area of any zone under plantation should be at least 25 per cent, but activists say it is only 12.1 per cent here. More plantation could mitigate the effect of the emissions. Activists also fear that the copper slag which goes into the river would end up in the sea. As there is a southern littoral drift along India’s east coast, this will gradually find its way into the Gulf of Mannar, which is a mere 14 km from the smelter. This will—if it has not already done so— destroy the ecologically-sensitive Gulf of Mannar Biosphere Reserve, not to mention the human habitations of Tuticorin. The polluter must pay.

What worries residents is the way in which the company obtains environmental clearances and resumes operations after a mandatory suspension period. The company has been shut down five times in the past for violations.

On May 28th, the state government issued the order to shut down Sterlite’s copper smelter in Tuticorin for good, meeting the long-standing demand of the local residents. The decision has been made “in respect to public sentiments”, in the words of the Chief Minister. The order is said to be ‘in the larger public interest’, and the state Pollution Control Board has been asked to ‘seal the unit and close the plant permanently’. Power supply has been cut. Soon after that order, the State Industries Promotion Corp of Tamil Nadu cancelled the allotment of a 342-acre land parcel allotted for the plant’s proposed expansion.

But there is another aspect that is being ignored in the demands to close down the unit. Apart from 3,500 persons working directly for Sterlite, another 30,000- 40,000 work for ancilliaries associated with it. They are all unemployed today. Imagine the suffering caused to families with children to be educated and elderly people in need of medical care. Who is thinking of them?

Vedanta is likely to go to court. Will the order to seal the company stand legal scrutiny? What is the message being sent out to other industries? The main objection today is against Sterlite’s expansion plan. The firing was the fault of the police and the administration. So why has the plant been shut down?

The problem in India is poor implementation of laws and lack of transparency. The Pollution Control Board’s readings should have been made public, whether they were for or against Sterlite. The company should publicly disclose its technology and say where else, apart from India, it is in use. And the police should have been restrained. If there were ‘anti- nationals’ in the crowd, then their arrest and trial should’ve done individually. Shooting people indiscriminately is not acceptable. Now the opposition has jumped into the fray with one more issue. Peace will not come too soon. 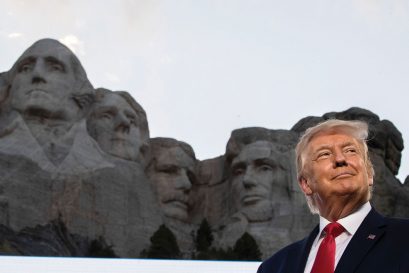 A Referendum on Trump: Will the Base Hold?