The Lost Revolution of Urban Maoists—Or Whatever 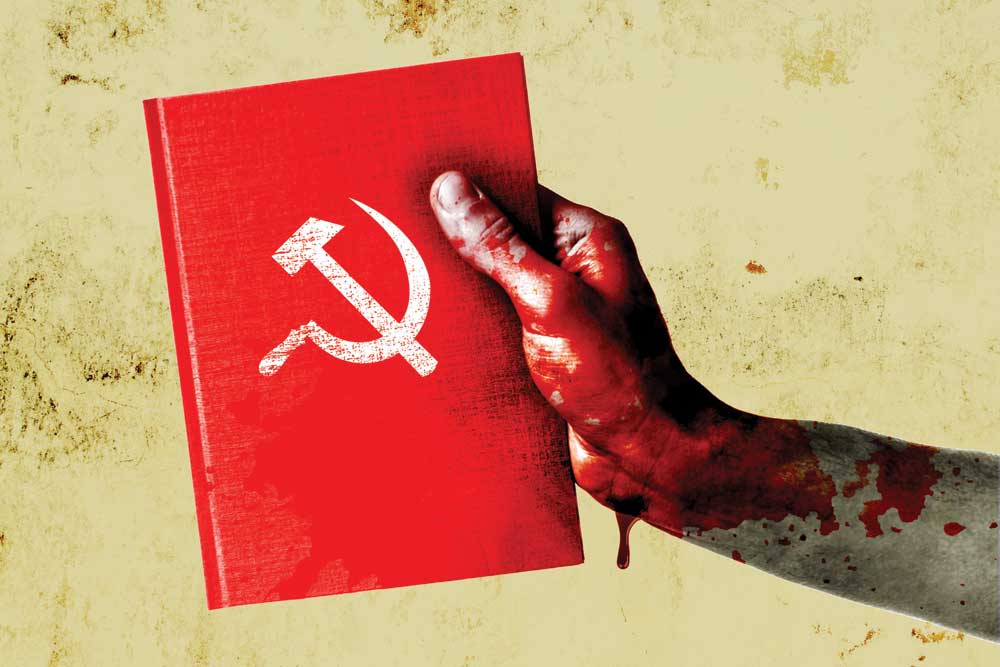 IN THESE TURBULENT times it’s useful to recall stories from the past. They help put things into perspective and they introduce an element of levity into the grey grimness that increasingly surrounds us. So let me recall an anecdotal tale from the early 1970s. St Stephen’s College in Delhi was (and remains) a far cry from Presidency College or Jadavpur University in Kolkata. As now, then too it was associated with academics and a certain elitism that cocooned it from Delhi University. It wasn’t the kind of college where Revolution would come knocking in the wake of the Naxalbari peasant uprising in distant West Bengal. The students were children from privileged and entitled families.

Yet Revolution did come calling. And it was not limited to students scrawling ‘China’s path is our path. China’s Chairman is our Chairman’ on the main tower of the college, or ‘Reactionary teachers, we will have your skin for shoes for the poor’ on a lecture-hall blackboard. A group of students actually left to join the Revolution. One of them, now a fashionable liberal, sent a postcard home, informing his parents that he was busy preparing for the PLA to march in and liberate the oppressed masses in India, and that they should not look for him. A fellow student, who is a well-known Establishment economist today, joined the toiling classes to be in the vanguard of the coming uprising.

The road to Revolution, Lenin is believed to have prophesied, would lie through Peking, Shanghai and Calcutta. That apocryphal prophesy, in which there was touching if naive faith, was to prove untrue very soon. The PLA never came marching in, the Revolution never happened, and our radical Stephanians returned to their classrooms, disillusioned and disabused, meekly submitting to the tyranny of their reactionary teachers. “One of the reasons for my return was the prospect of being asked to kill people. We were a bunch of romantics who just didn’t know they were being fed with lies,” the Establishment economist told a newspaper some years ago. A comrade of his, a fellow Stephanian, went on to become a top bureaucrat, predictably so.

Back in West Bengal, more so in Kolkata and its suburbs, that disillusionment came much later though the fire lit by Naxalbari had begun to sputter not long after Charu Mazumdar’s death in police custody in 1972, 12 days after he was arrested from his hideout. The founder of the breakaway far-Left CPI (ML) who plotted the Naxal Andolan to overthrow the Indian state had clearly been betrayed by a comrade who was either disillusioned and bartered the information for a one-way ticket to America or squealed at the sight of the pliers with which his interrogators at Lal Bazar, the Kolkata Police Headquarters, threatened to pull out his nails, one nail at a time. That was the standard mode of interrogation; if it did not work, Runu Guha Neogi, the dreaded super cop who had a natural talent for torture and flair for inflicting punishment, took over. But that’s another story.

The fragmentation of the Naxal Andolan was similar to an amoeba splitting and multiplying. Charu Mazumdar’s ‘Eight Documents’, the ideological blueprint which decreed that ‘Revolution must follow the path of armed struggle’ and served as the guiding principles, were soon set aside as the ‘central party line’ mutated and party units transmogrified into disparate groups with their own doctrines and party lines. The class war unleashed in West Bengal degenerated into a caricature of Mazumdar’s envisaged Revolution. All revolutions ultimately go that way, just as every revolution ends up devouring its own children.

Revolution 2.0 bears little or no resemblance to Revolution 1.0—it is wrong to call its practitioners Naxals even if they worship the same god who now lies embalmed in Beijing

Poorly paid constables, by no means class enemies, real or imaginary, were murdered, the vice-chancellor of Jadavpur University, a gentle soul, was killed, and scholar-reformer Ishwar Chandra Vidyasagar’s statue was decapitated. Crumbling walls of decrepit houses were plastered with slogans celebrating Mao: ‘China’s Chairman is our Chairman’ and ‘Power flows from the barrel of a gun’ were the most common. In the end, that’s what the Revolution was reduced to—slogans borrowed from Mao’s Little Red Book. That and Coffee House debates. What was left of the far-left was ruthlessly crushed with chilling brutality by Siddhartha Shankar Ray. The CPM did not complain, happy that its turf was rid of imminent threat. Jhumpa Lahiri’s book, The Lowland, tells the story best.

China had billed Charu Mazumdar’s Naxal Andolan as India’s Spring Thunder. It didn’t quite happen that way. Which too was predictable—as predictable as the Arab Spring turning out to be a desert summer, harsh and brutal, unforgiving and scorching. Nor was there a Prairie Fire. India moved on while revolutionaries on the run moved to safe havens in Bihar, Odisha and Andhra Pradesh. But the idea of Revolution survived and regained strength when these groups came together in 2004 to forge a new party with a new party line broadly based on the ‘Eight Documents’ but far more radical and openly murderous.

Thus was Mazumdar’s CPI (ML) reborn as the CPI (Maoist). The Grey Hounds had decimated the Naxals in Andhra Pradesh, forcing them to move base to Maharashtra and Chhattisgarh. Over the next few years a Red Corridor emerged, running across the length of India, from the subcontinent’s southern tip to Nepal. The Maoist depredations were far more damaging to the state than the Naxal violence had ever been. This was war by another name, what former Prime Minister Manmohan Singh aptly described as the most serious threat to India’s internal security.

With Revolution 2.0 came a new breed of Urban Maoists, call them Urban Naxals if you wish. If today’s well-armed cadre, more a trained militia, vicious and remorseless, are not a pale shadow of the young men and women who heeded Mazumdar’s call in 1969 and realised all they were good at was scripting vacuous slogans and blowing themselves up while making bombs, or getting caught even before they could make a meaningful contribution to the Revolution, the Urban Maoists are anything but starry-eyed naive romantics like the Stephanians who thrilled at the thought of the PLA marching in but were repelled by the idea of killing people.

If the precedence set by the Supreme Court while freeing Dr Binayak Sen, a facilitator of Maoist terror in Chhattisgarh, on bail is any indication, we could see these Urban Maoists walking free

Should we then describe the activist academics, activist lawyers, civil liberties activists and all other activists who make up the Army of the Virtuous and who openly associate their sympathies with, and support for, the murderous, rapacious, extortionist Maoists, who in turn have no hesitation in admitting that they are waging war on the Indian state with the explicit purpose of toppling the Government and seizing power, as ‘Useful Idiots’, Lenin’s aphorism for intellectuals who can be manipulated to serve as willing propagandists?

The answer is both yes and no. There are ‘Useful Idiots’ who have tied their scarves to the mast of Revolution because they have allowed themselves to be manipulated; some believe it is the morally right thing to be on the wrong side of the state. But they form only a minority. The majority among the Urban Maoists, or to use the more fashionable term Urban Naxals, subscribes to the subversive and insidious Maoist ideology that fuels the war within India. To not recognise this would be dishonest and deceitful.

This lot intellectualises Maoist crimes, legitimising the murder of security forces and civilians, the blowing up of convoys, the ambushes that lay to waste hundreds of human lives. Jihad killed 166 people in Mumbai over two days and nights. People’s War killed 148 civilians in one night when tracks on which Jnaneswari Express passed were sabotaged in West Bengal. Our Urban Maoists offer their services as ‘overground’ supporters, helping plot the next attack, the next defence, the next justification. They are an integral part of Left-wing extremism. They are media savvy and have both social and political capital which they invest in promoting the ideology they share with the Maoist cadre on the field, putting a gloss on their war on the Indian state, redefining subversion as dissent, and popularising crime in the name of Revolution.

They taint young and impressionable minds on campuses, generating cannon fodder for India’s own ‘Red Army’. They strategise and scheme the ‘Rajiv Gandhi-style’ assassination of India’s democratically-elected Prime Minister like cold- blooded killers. They think nothing of using their influence to create urban chaos and disorder as we saw at Bhima Koregaon. They seek and secure judicial intervention to hobble the state’s efforts to fight back Red terror. They had the Salwa Judum, a people’s movement against Maoist terror, disbanded; they now want the Bastariya Battalion to be declared illegal. Unfortunately, the courts have weighed in on their side, unmindful of the consequences. The masque of activism Urban Maoists wear is not a new phenomenon though. We forget that during the decade of Khalistani terror killings happened under the cover of intellectual justification by Leftist academics and protection of human rights activists. In the 1970s, this immoral activism emanated from foreign soil: Mary Tyler travelled all the way from Britain to provide intellectual cover to Naxal crimes and went to jail for the ‘cause’. Activism does not need to be imported anymore. We have a glut of it at home.

Revolution 2.0 bears little or no resemblance to Revolution 1.0—it is wrong to call its practitioners Naxals even if they worship the same god who now lies embalmed in Beijing. It is for the courts to decide whether the evidence collected by the Maharashtra Police against the five Urban Maoists they have recently arrested, and others who were arrested earlier, passes legal and judicial scrutiny. If the precedence set by the Supreme Court while freeing Dr Binayak Sen, a facilitator of Maoist terror in Chhattisgarh, on bail is any indication, we could see these Urban Maoists walking free. But courts of law are not always right, nor is the law known to be unerringly wise. As Mr Bumble famously said, ‘If the law supposes that—the law is a ass.’

If what we are told has been committed, if the conspiracies aimed at debilitating the Indian state and wounding our democracy are true, if those who hide behind the masque of activism and pretend to be fighting for justice for the poor, the dispossessed and the distressed are mobilising funds to procure grenade-launchers, if students are being indoctrinated to hate and kill, then that is definitely not ‘dissent’, nor should the interpreters of law suppose it to be so; it transgresses all commonsensical understanding of what dissent in a democracy means. To be blind to this reality would amount to abandoning our Republic to the mercies of ‘Gandhians with grenade-launchers’.