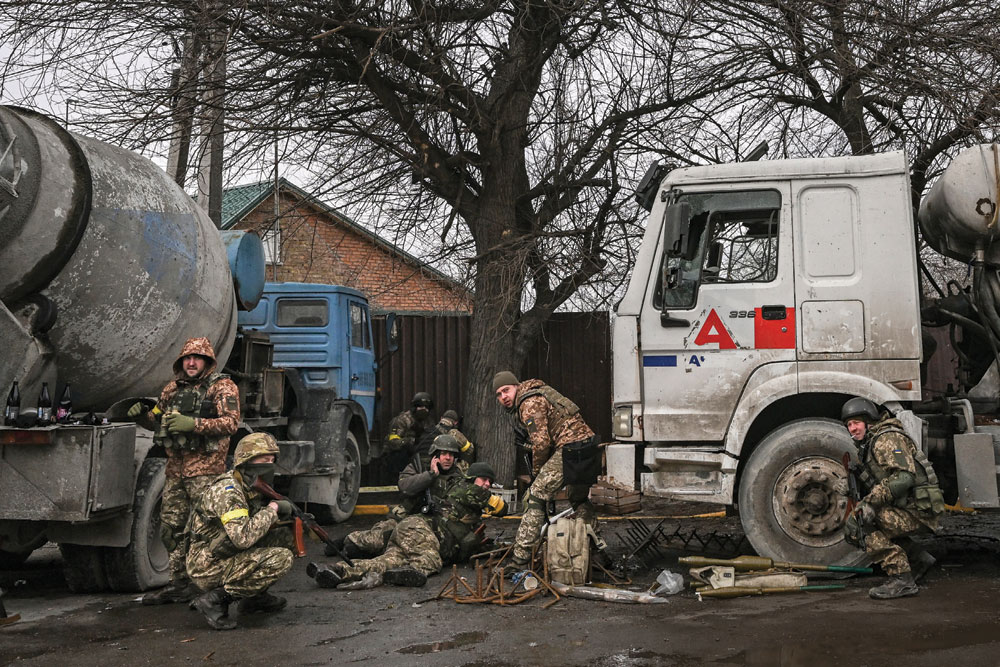 
ONE CAN BE forgiven for still not accepting the fact that Russia has invaded Ukraine. The mobilisation of nearly 200,000 troops along the border should have been a bluff, or at the most a precursor to a more limited incursion. Leaked US intelligence reports warning of full-scale war should have been exaggerations. Weren’t full-scale, cross-border land invasions meant to be a relic of the past?

But he did. The horrors of this war are plain to see, and further amplified by the power of social media, which have brought unrelenting images of destruction and displacement. The immediate global impacts, especially skyrocketing oil prices, are being felt, too.

Wars are famously unpredictable. We don’t know how long this conflict will last, or how it will end. The only person who knows may be Putin himself. But even at this early juncture, it’s clear the war has caused seismic shifts for international relations. And it presents South Asia with difficult choices.

Putin’s invasion offers a jolting reminder that traditional security threats have not gone away. All that talk of new and emerging security challenges, such as climate change, pandemics, and cyber war? All that emphasis on today’s conflicts mainly being waged by proxies and other non-state actors? All that focus on the need for more agile and modern military forces to counter these new threats? Putin has put that talk on ice by launching a traditional conflict, using traditional tactics and traditional equipment. To be sure, it features modern elements, like information warfare. Still, one of the most striking manifestations of the war effort so far has been eerie satellite imagery of a 40-mile-long Russian tank convey slowly making its way across Ukraine. It’s a scene associated with so many wars of the past.

Another notable fallout of this war is the limits of US power, and that of the West on the whole. The NATO alliance couldn’t deter Russia’s annexation of Crimea in 2014, and it couldn’t deter this much larger invasion. Washington tried its best, from threatening sanctions and offering diplomacy to leaking intelligence meant to expose Russian false flags. Nothing worked.

Beijing and nervous citizens of Taiwan have taken note. So has Pyongyang, which tested missiles soon after the launch of the invasion.

The good news for the West is that Russia has reenergised and reunited a NATO alliance that floundered during the Donald Trump era. Putin has helped Joe Biden achieve one of his core foreign policy goals—the restoration of alliances. Washington and its NATO allies are on the same page in their views of Russia’s invasion. Also, EU countries, which rely heavily on Russian energy, are rapidly developing new policies to reduce their reliance on Russian gas, in order to ease their concerns about any sanctions on the Russian energy sector—one of the only aspects of this crisis where Washington doesn’t see eye-to-eye with its European partners.

Still, NATO has difficult decisions to make. Unless Russia expands its war into NATO territory, the alliance wisely won’t put boots on the ground. This leaves limited military options to assist Ukraine. The most impactful option, a no-fly zone, is unlikely because it could drag NATO into the war. A more feasible step may be providing training to Ukrainian troops on NATO soil. For now, the plan is to funnel arms and other military assistance to Ukrainian forces. But this may not be enough. For now, Ukraine is bravely resisting Russian offensives, but much more Russian firepower could be in the offing. The numbers aren’t in Ukraine’s favour. The Russian military is much larger, and Moscow’s defence spending in recent years has been more than 12 times that of Ukraine’s.


While NATO has difficult choices to make in the military/security realm, South Asian capitals are presented with some tough diplomatic and economic choices. India has declined to criticise its Russian friend for its aggressive acts. This position is increasingly untenable because the invasion of Ukraine is especially egregious, and because New Delhi’s strong security relationship with Washington means India will be under unprecedented pressure to change its stance

For countries further removed from the war, such as those in South Asia, there are different kinds of difficult choices to make. Russia has no enemies in South Asia—and quite a few friends. The Soviet debacle in Afghanistan continues to haunt Russia today, but in recent years Moscow has cultivated cordial ties with key political actors there, including the Taliban. Its relationship with India continues to be a combination of nostalgia-driven bonhomie and cold-hard-interests-based defence cooperation. In recent years, impelled by shared goals in Afghanistan and a keen interest in Pakistan’s gas industry, Moscow has quietly scaled up ties with Islamabad. In other South Asian states, Russia has made trade and investment inroads. It’s a top destination for Sri Lankan tea exports, it has invested in nuclear power in Bangladesh, and it has explored cooperation with Nepal’s energy industry.

In the West, where relations with Moscow range from awkward to hostile, there’s no question about whether or not to take a hard line towards Moscow, post-invasion. But in South Asia, it’s more complicated. The region has been divided about how to react—quite literally. Half the SAARC states abstained from a UN General Assembly resolution condemning the invasion, and the other half voted in favour.

While NATO has difficult choices to make in the military/security realm, South Asian capitals are presented with some tough diplomatic and economic choices. Up to now, India has declined to criticise its Russian friend for its aggressive acts. This position is fully consistent with past policy, but increasingly untenable today because the invasion of Ukraine is especially egregious, and because New Delhi’s strong security relationship with Washington—stronger even than back in 2014, when Russia annexed Crimea—means India will be under unprecedented pressure to change its stance.

The war poses threats to Indian foreign policy interests, from driving Moscow into Beijing’s arms to distracting Washington from countering Chinese power in the Indo-Pacific. India will be pressured to play an unfamiliar but potentially useful role of mediator between Russia and Ukraine.

New Delhi will also be faced with tough choices about future arms imports from Russia. With fresh sanctions in place, Washington will expect New Delhi to dramatically draw down, if not altogether halt, future defence acquisitions from Russia—and especially if, as is likely, it waives India from sanctions for its S-400 purchase. India has reduced its share of Russian arms imports in recent years, but it remains heavily reliant on Moscow. Neither its other arms partners nor its still-plodding indigenous defence production system can quickly fill the gap. India could reduce energy imports from Iran because it developed a Plan B to immediately turn to other Gulf exporters. But India can’t go cold turkey on its Russian arms reliance, because of a lack of immediate alternatives.

Then there’s Pakistan. Islamabad speaks of engineering a foreign policy shift to “geoeconomics”, with a focus on forging deeper trade and connectivity links with Afghanistan and Central Asia—a goal with even greater appeal now that Pakistan’s Taliban ally is in power in Kabul. Russia, with its deep influence in Central Asia, is envisaged as a key component of this strategy, and gives Islamabad a strong incentive to strengthen friendship with Moscow.

But the war in Ukraine complicates Pakistan’s plans. Russia’s coming economic implosion will mean less capacity to provide financial assistance to Central Asian states, which at any rate have reacted with anger to Russia’s invasion and may not wish to work with it—on trade and connectivity or anything else. Any direct Russian investment in Afghanistan, which the Taliban would certainly welcome, is also in question. Additionally, Pakistan’s prospects for energy cooperation with Russia are in doubt, given the new sanctions regime. Fortunately for Islamabad, it may get a boost from its ally China, which could fill an economic vacuum in Central Asia left by a beleaguered Russia. Still, Pakistan will need to figure out how to carry out its core foreign policy vision now that a key intended player could soon be out of the picture.

Russia’s war, like the pandemic, has changed the world. For those fortunate to survive Covid, life will eventually return to normal. But the war’s effects—starting with its devastating human toll in Ukraine and extending to its global implications for economics, diplomacy, and geopolitics—will linger for years

Meanwhile, the war presents smaller South Asian states with opportunities—but with a big catch. Moscow will be looking for new markets beyond the West to help boost its struggling economy. Countries like Bangladesh and Sri Lanka, where Russia has investments, trade ties, friends, and soft power (through the provision of education scholarships in Russia), may appear attractive to Moscow. Additionally, the smaller South Asian states don’t like being battlegrounds for intensifying India-China competition. They may welcome opportunities to escape that tug of war through more engagements with a third power.

But that would be a big risk. There are important trade relationships with the EU, including special trade privileges. Engaging with a sanctioned Russia could jeopardise these important links with Europe, and undermine fragile economies hit hard by the coronavirus pandemic and inflation.

Russia’s war, like the pandemic, has changed the world. For those fortunate to survive Covid, life will eventually return to normal. But the war’s effects—starting with its devastating human toll in Ukraine and extending to its global implications for economics, diplomacy, and geopolitics—will linger for years. A war with many 20th century characteristics will leave a lasting imprint on a 21st century world.