From Russia With Nostalgia

A relationship that has stood the test of history 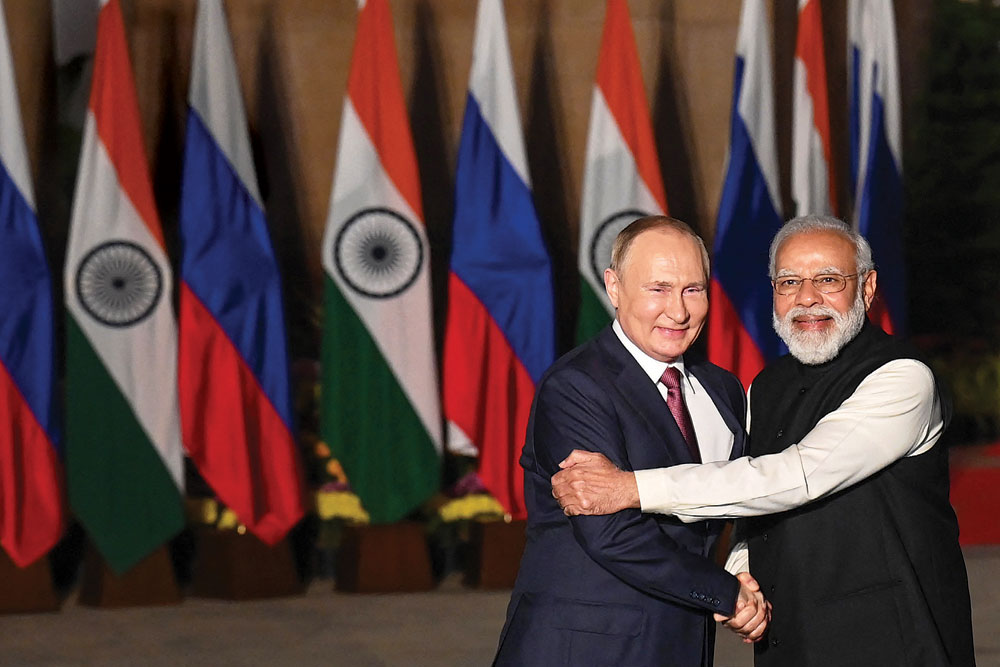 
FOLLOWING THE ANNUAL India-Russia bilateral summit, held in New Delhi between President Vladimir Putin and Prime Minister Narendra Modi on December 6th, it is certainly worth reflecting on the significance of this event and its implications within the larger geopolitical context.

India and Russia, as part of their special and privileged strategic partnership, have a practice of holding annual bilateral summits (launched in the year 2000), although the 2020 summit was cancelled due to the Covid-19 pandemic. This time round, notwithstanding the ongoing Covid crisis and the spread of the new Omicron variant, Vladimir Putin decided to go ahead with his diplomatic trip to New Delhi, demonstrating its importance for the future development of India-Russia relations. Notably, this summit took place in the extended format, that is, the 2+2 dialogue had also been held with the foreign and defence ministers of both countries.
In general, the substance and symbolism of the summit can be viewed as a counter-narrative to certain sceptical views that emphasise the irreversible shifts in Indo-Russian relations—that India has drifted away to the West, and Russia is getting closer to China at the expense of its ties with India.

The 1971 Treaty of Peace, Friendship and Cooperation between India and the Soviet Union became a significant milestone and referral point in the evolution of Indo-Russian cooperation. Unlike the US, the Soviet Union stood firmly by the Indian side during the East Pakistan crisis, and those events are often reflected upon even today. The collapse of the Soviet Union in 1991 brought many uncertainties that also affected India-Russia bilateral ties. During this time, Russia experienced domestic chaos, had to reconcile with its new status, and tried to improve relations with the West. In this atmosphere, India-Russia relations took a backseat, and did not feature high on the Russian foreign policy agenda.


The strategic partnership between India and Russia has not only stood the test of time but also keeps evolving. This is despite the changing geopolitical realities, when both countries have to tread a thin line by simultaneously nurturing their alliances with countries not friendly with each other (the US and China). India and Russia set an example of how mature diplomacy can be conducted

The changes came in the year 2000, when Vladimir Putin succeeded Boris Yeltsin as Russian president. Putin immediately realised the importance of the Asian vector and enthusiastically embraced the task of reinventing the Indo-Russian friendship. The signing of the Declaration of Strategic Partnership in October 2000, during Putin’s first state visit to India was a landmark development, elevating bilateral ties to a new level.

It is remarkable that the strategic partnership (and friendship) between India and Russia has not only stood the test of time but also keeps evolving, strengthening and gaining momentum. This is despite the changing geopolitical realities, when both countries have to tread a thin line by simultaneously nurturing their alliances with countries that are not friendly with each other (the US and China, for example). In this scenario, India and Russia set an example of how mature diplomacy, based on mutual trust and understanding, can be conducted.

Interestingly, this summit took place a day before the virtual meeting between the Russian president and his American counterpart. That latter event could not be more different compared to the India-Russia summit, as it would happen in the context of the ever-growing tensions between Ukraine and Russia, alleged build-up of Russian troops and their potential invasion of the eastern part of Ukraine. Unfortunately, there are multiple issues that drive a wedge between Russia and the West, resulting in a perpetuating cycle of misunderstanding and animosity.

In contrast, US-India relations have been flourishing for years now and both countries recognise the strategic value of bilateral cooperation, using various formats to enhance their ties.

DIVERGENCES ON THE INDO-PACIFIC

From the security standpoint, Russia and India view the Indo-Pacific region differently. Defined by geographic location, India is placed at the forefront of what is happening in this part of the world. Hence, the country needs to address its security concerns by being part of the important strategic alliances. For its part, Russia is not an influential player in the Indo-Pacific and has not even reconciled itself with the concept. Russian policymakers believe that this is an artificial construct, aimed at replacing the ‘consensus seeking Asia-Pacific’ with ‘something divisive’. This rhetoric indicates that Moscow and Beijing speak in one voice and refuse to support this new regional initiative.

Moscow is certainly worried about India’s participation in the Quad. During the latest summit in Delhi, Russian foreign minister Sergey Lavrov once again expressed Moscow’s concern about the activities taking place ‘under the slogan of Indo-Pacific strategies with functioning of non-inclusive blocs’

Moscow is certainly worried about India’s participation in the Quadrilateral Security Dialogue, or Quad (US, India, Japan and Australia), that serves as a platform for four regional powers to enhance their influence. During the latest summit in Delhi, Russian Foreign Minister Sergey Lavrov once again expressed Moscow’s concern about the activities taking place “under the slogan of Indo-Pacific strategies with functioning of non-inclusive blocs”. Lavrov also referred to AUKUS (Australia-UK-US) as one of such example.

India and Russia share similar security concerns over Afghanistan following the US withdrawal in August this year. During the summit on December 6th, the leaders of both countries highlighted that “Afghan soil should not be used for sheltering, training, and financing any terrorist groups
including the ISIS, the Al-Qaeda and the Lashkar-e-Taiba (LeT).” LeT, a Pakistan-based terror group, presents a real security threat to India, and Russia seems to have a good understanding in this regard.

It is important that the current humanitarian situation in Afghanistan has also been discussed during the summit and both leaders have decided to provide immediate humanitarian assistance to the Afghan people. The supply of basic goods to the ordinary Afghan people should be viewed as a priority by all the regional powers. Talks about cooperation against terrorism, safe havens, arms and drugs trafficking should be supported by attempts to eradicate the root causes of the malicious activities in Afghanistan. That is, among other things, the day-to-day suffering and miserable living conditions of the people on the ground.

The defence sector has been traditionally viewed as one of the main pillars of the India-Russia strategic partnership. Defence cooperation has evolved from an export-import model to the more complex forms of military-technical collaboration. The BrahMos missile system is one such example, as it has been produced under a ‘Make in India’ initiative and has become the result of successful joint research, development and production.

In October 2016, India and Russia signed an Inter-Governmental Agreement (IGA) for four Krivak-class stealth frigates, whereby two frigates would be purchased from Russia and another two would be built by Goa Shipyard Limited (GSL). The first of two Krivak-class stealth frigates, which have been built in Russia, is expected to be delivered to India in the middle of 2023.

Given the national security concerns, India concluded the contract for the supply of S-400 systems in 2018. Notably, India still decided to go ahead with the S-400 deal despite US disapproval. It means that India can be firm and consistent in pursuing its own strategic goals, even if it annoys its close Western partners. The transfer of the S-400 equipment has already started and it will stretch over some time since it is a multiple order. Most probably, India will get a waiver from the CAATSA (Countering America’s Adversaries Through Sanctions Act), as the US would not want to spoil relations and fuel disagreements with India.

India decided to go ahead with the s-400 deal despite US  disapproval. It means India can be firm and consistent in pursuing its own strategic goals, even if it annoys its close western partners. The transfer of the s-400 equipment has already started

The latest deal for 6.1 lakh AK-203 assault rifles, signed on December 6th, is estimated at over `5,000 crore and will be manufactured by a joint venture, Indo-Russian Rifles Private Ltd (IRRPL), at Korwa in Uttar Pradesh’s Amethi district.

Besides the defence sector, India and Russia have an enormous potential to cooperate in the field of renewable and nuclear energy. Russia, as one of the key global players in the energy market, can be an important partner, supporting India’s efforts in the green energy transition. Russian companies have been involved in the construction of six nuclear reactors for the Kudankulam nuclear power project in Tamil Nadu.

Space has emerged as another important area of cooperation between India and Russia in the high-tech sector. Russia is ready to provide assistance to India’s Human Space Flight Mission and offer support for India’s participation at the International Space Station.

Indo-Russian relations have definitely stood the test of time and have been remarkably consistent over recent decades. In that sense, this relationship goes beyond the common rhetoric of influence and strategic pragmatism. Rather, it can be considered a long-term friendship between two countries. One may observe that it is already in both countries’ DNA to regard themselves as true and mutually supporting allies.