It could have been a period piece about political prisoners and state repression during the Emergency. But 30 years after it was made, the film still rings with contemporary relevance. 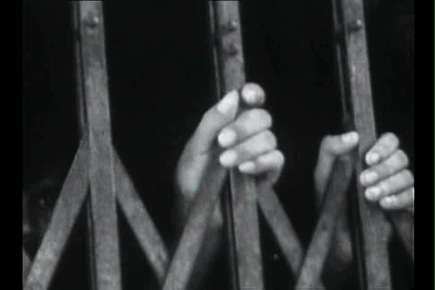 It could have been a period piece about political prisoners and state repression during the Emergency. But 30 years after it was made, the film still rings with contemporary relevance.


It could have been a period piece about political prisoners and state repression during the Emergency. But 30 years after it was made, the film still rings with contemporary relevance.

In Anand Patwardhan’s 1978 film Prisoners of Conscience, Dev Nathan, a CPI-ML activist who spent five months in prison without a trial, recounts his experiences in police custody: “I was kept in that office for about eight days, during which I was questioned continuously, not allowed to sleep for that whole week. I was tortured in many ways—hit on the neck and the back. I was caught by the hair and shaken around, handfuls of hair were pulled out in this manner. The next day I was made to lie down on a table and beaten on the soles of my feet. One night my hands were tied to the beams of a window and I was kept in that position the whole night… I was sent to the police lock-up and was kept there for a whole month. Then the Andhra police came—they are much more experienced in torture and investigation.” We know it can go further and it did. Among the things the Andhra police did was to push pins into his fingertips.

But the most emblematic of the story of independent India is perhaps what another interviewee, Mary Tyler, says: I’ve heard that in some prisons in Bihar they are using electro-torture, though electricity is not easily available in the villages [there]. This sentence contains an entire history, where the state has brought more oppression than progress to its poor.

For a political event that was so deeply violent, so telling, and so formative, the Emergency is remarkably absent from popular discourse. Sudhir Mishra’s film, Hazaaron Khwaishein Aisi, is the only exception that comes to mind from recent times.

Even for this reason alone, it is worth revisiting Anand Patwardhan’s 1978 film Prisoners of Conscience, a landmark documentary that examined state repression of people’s movements by talking to and of those who have been political prisoners during the Emergency.

Anand Patwardhan is India’s most well-known documentary filmmaker, often in the news for his legal battles with the CBFC and Doordarshan. Although politically critical films were made through the 1960s by some filmmakers, in a range of styles and voices, with varying degrees of sophistication, Patwardhan’s 1975 film Waves of Revolution, which followed the JP-led students’ movement in Bihar is probably the first independently produced political documentary in India. But it was his next film, Prisoners of Conscience, which created his reputation as a significant filmmaker.

The film begins by presenting the contradictions—slums and skyscrapers—that abound in India, then independent for 30 years, and delineates the great economic deprivation and disparity that have led to the many uprisings all over the country. In 1975, the film tells us, Indira Gandhi’s government responded to this unrest by imposing the Emergency, which entailed a suspension of fundamental rights and summary arrests of all who dared protest.

The film was made after the Emergency had been lifted in 1977 and the Janata Party government had come to power. Although it begins with the interviews of those who were imprisoned during the Emergency, the film gradually pans out to engage with the idea of how the state muzzles dissenting voices even in seemingly ‘normal’ circumstances, and makes a passionate case for those who cannot but fight against this gagging, for they are prisoners not just of the state, but of their own conscience.

Prisoners of Conscience is made in what we now know as Anand Patwardhan’s hallmark style: cinema that values clarity of statement over the ambiguities of the aesthetic and uses ironic juxtaposition almost percussively through the film to build its argument.

For instance a sequence made up of paintings tells the haunting story of two prisoners in Andhra Pradesh’s Mushirabad jail, who are led to the gallows at 5 a.m. when the whole prison is silent. As they walked they began to call out slogans—“Long Live the Revolution!”—and other prisoners, far away in their cells, joined in in a chorus of voices. The two became the first political prisoners to be executed in a free India. From here the film cuts to Indira Gandhi at the Republic Day parade, as a military band plays Saare Jahan Se Achcha.

Although Patwardhan’s style was influenced by the agit-prop cinema movement of the Latin American revolutions, he eschews the flights of their manifesto-like construction, their radical poetic conceits. As a result, watching the film years later, we are only occasionally, as in the above sequences, filled with the feeling of outrage the film seeks to build.

But what does stay with us are the composed and dignified voices of those who have been imprisoned and tortured without trial for years, lost their friends and comrades to custodial torture and encounters. Barely betraying their trauma, they humble us most with their courage and move us with their compassion and conviction.

Adhrishya Kumar, who upon release from prison has been mobilising support for the release of other prisoners, says: “Wherever the oppressed begin their struggle, I feel I must become one with it.” Mary Tyler, an Englishwoman who married an Indian, and was released while her husband still languished in prison says: “It would be immoral to even demand just his release when thousands of people are in prison in the same or even worse conditions.” This simple idealism and belief in fairness can never fail to inspire, for it is beyond ideology and in the realm of human justice.

The revolutionary Bengali and Telugu songs that recur on the soundtrack bring a felt beauty and reflectiveness. The film ends with a song that goes: I hear the mountains shake/ And the mansions of the rich crumble /As the people march upon them/ Do not stop me, O mother/ For I go to make the sun rise… as images of people bearing torches in a mashaal morcha play out. The grainy 16mm, the contrasty blacks and whites create a poetry of their own, of half-lit bodies in the blackness of a night, where no greys can exist.

We no longer live in times (and perhaps no one ever did) where simple propositions suffice. But we may need to draw on this clarity of feeling while retaining the complexity of our ideas. Through the film, people often speak of how, though the Emergency is over, political prisoners still fill jails as they had indeed even before the Emergency. Again and again people refer to Naxalites, Nagas and Mizos who are still in jail. They could be describing India today. Perhaps, we may wonder, the Emergency never got over, that state repression has merely been normalised.