“When I was approached to contest elections, I had only one condition. I would not give up the role of ASHA” 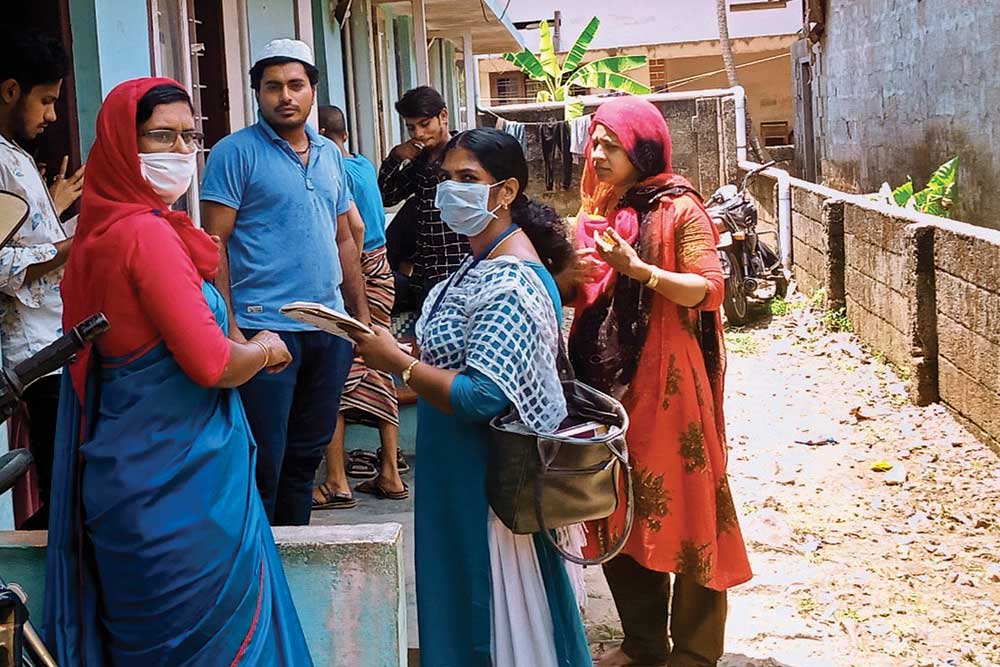 
Towards the end of the conversation, I asked a series of questions of Thahira Sudheer. What is the exact population in her ward? How many cases of diabetes, cholesterol and blood pressure? The number of fever cases and other communicable diseases? The numbers came at once without any need for reference. Her only note of concern was that the fever cases were zero. This, she thought, could mean that people were reluctant to share the information for fear of being quarantined. “But to a great extent, I can make out whether they are lying or not. When I visit them [rigidly maintaining social distance, she stresses], I closely observe whether they have any physical symptoms like red eyes, cough, etcetera,” she says.

Forty-three-year-old Thahira is an accredited social health activist, or ASHA, in the Nellikkuzhy panchayat of Ernakulam district. She has been working as an ASHA since 2008 along with several other roles. She is a local self-government (LSG) member representing a ward and chairperson of the panchayat Standing Committee for Health. She is patron of the Area Development Society of Kudumbasree (Kerala’s poverty eradication programme), a paralegal volunteer at Kothamangalam Magistrate Court under the legal service authority and mother of two, a 20-year-old boy and 17-year-old girl.

On Wednesday (April 15th), by 9 in the morning, Thahira had finished cleaning the house and cooking for her family. She then got ready and reached her office by 9.30. Though Kerala had flattened the Covid curve with ASHAs playing a key role, Thahira and her colleagues have already started the next battle against monsoon epidemics, mainly dengue. From 10AM till 3.30PM, she went to 29 houses in the panchayat as part of a squad to create awareness about these diseases since Kerala had just got some summer rains. The team, which included health inspectors, public health nurses and ASHAs, spilt into different groups and started house visits. Thahira was in a group of three with two more ASHA workers. They looked at the surroundings of each house and found coconut shells and small pits where water could accumulate leading to mosquitoes breeding. She gave instructions to every family to keep their surroundings clean, explaining the dangers. By 3.30PM, Thahira was back home and preparing dinner. Five persons are still under quarantine in her area and Thahira called them one by one on phone. She also had other grievances to address, not in her role of ASHA worker but as an LSG member. A 62-year-old cancer patient had to go to Ernakulam for chemotherapy and wanted her to arrange a car. Thahira contacted excise department officials who had earlier offered support. The vehicle was arranged with their help. The last thing to do for her was to enter details in the daily diary of two new pregnant women in her ward and four children whose next course of vaccination was imminent. She had met the families during the day field visit.

“During visits, we have to collect the complete profile of the family. We have to record separately the data of children, elderly and bedridden who are in need of palliative care. We have to record the existence of communicable and non-communicable diseases separately. We have to visit the pregnant women in our assigned locality at least once in a month. We provide vitamin supplements and medicines if required (supplied from Primary Health Centre). We have to also ensure that children are given vaccination at regular intervals. If there are bedridden patients in my ward, I have to visit them regularly and give required care. We even help to wash and change their clothes,” says Thahira.

ASHAs were instituted by the Ministry of Health and Family Welfare, under the National Health Mission, a programme started in 2005. The idea was to have a female worker in every village to promote health education and awareness. They would be an interface between the community and the public health system. The ratio envisaged was one ASHA for every 1,000 people. Kerala’s ratio is better than that, with at least one ASHA in each ward of all local bodies. There are totally 26,450 ASHAs, according to Seena KM, Senior Consultant and State Coordinator of the ASHA project. “The health-related campaigns of governments are carried on by ASHAs. It is primarily their job to conduct campaigns though there are others to support,” says Seena. If Kerala has managed to flatten the curve, it is because of a robust primary healthcare system evolved over decades. As its footsoldiers, ASHAs play a pivotal role in preventive policy. An ASHA has the complete health profile of her assigned locality, including the exact number of children, pregnant women, senior citizens and those in need of special care. The routine work of ASHAs even in normal times is the reason for Kerala’s consecutive success in dealing with virus outbreaks like Nipah in 2018 and 2019.


“As soon as the spread began, we started contacting families that have at least one member living abroad. With prior information about expats in every family, the job has become easier”

With Covid-19, ASHAs were key to Kerala’s aggressive contact tracing and monitoring of quarantined people. Thahira’s experience is a telling example. “I came to know about Covid when it started in China through the media in December itself. We used to discuss about it in our meetings. Our panchayat standing committee decided to strengthen the monitoring of fever and related diseases,” she says. Thahira doesn’t clearly recollect whether they started the work after getting a direction from the government or before. Monitoring of diseases is part of the routine work of an ASHA and all they had to do was intensify it. “When the first case was reported in Kerala in the last week of January, we all became vigilant. Kerala has a large number of expats. There are many in my panchayat too. In the first week of March, we were asked to monitor people coming from other states and countries. In the beginning, there was only one family under quarantine with one member who had returned from Germany. I called him the very next day of his arrival and instructed him to stay back home for 14 days and follow social distancing. He was cooperative. I used to call him once a day and if possible, twice. Till date, there are 13 families under quarantine and observation in my ward. All of them are returnees from countries like the US, Germany, Qatar, Saudi Arabia and the UAE. There was one person from Hyderabad too,” she says.

People generally adhere to quarantine guidelines and it is easy for her to find out the few who violate rules. “I entrusted the neighbours with the task of keeping an eye on them. They follow it very strictly. As soon as anyone steps out, I am informed immediately. Only two or three persons went out violating guidelines and it was due to ignorance, not deliberately. They had not taken it seriously. I explained and made them understand the need for isolation. I used to explain the impact of community spread. When they realised the dangers of mixing with people, they all stopped going out. Not only me, the health inspectors in the panchayat also used to call them.”

Thahira has to file daily reports to the junior health inspector and health inspector of the panchayat. Such reports from ASHAs are compiled and sent to the office of the district medical officer. If there are returnees from other countries and states, ASHAs are so entrenched in the community that they don’t even need that information from airports. Thahira has data of people working abroad in her ward. “As soon as the spread began, we started contacting the families that have at least one member living abroad. Having prior information about expats in every family, the job has become much easier,” she says.This close contact of ASHAs with every family in a ward played a crucial role in containing Nipah too when there were no deaths in the second wave in 2019.

Thahira volunteered as an ASHA because of her urge to do something meaningful. “I was taking care of children at home and wanted to work. I was a member of the Kudumbasree and they suggested I volunteer as an ASHA of the ward. I was happy to do it because it gave me the opportunity to meet people and help them,” she says. There was no remuneration apart from a meagre amount of travel allowance when she joined. “After a year I started getting Rs 300 a month. The then Left government gave us a hike,” she says. She stood for the LSG election in 2015 as a CPM candidate. “When they approached me to contest, I had only one condition. I would not give up the role of ASHA,” she says.

Nowadays, apart from monitoring families under quarantine, Thahira has to ensure that food has been provided to the migrant workers in her ward. “As of now, there are 52 guest workers in my ward. In the first two days, I went on my scooter to give them food kits. Now this is being done by volunteers. I have to monitor whether sufficient food is being supplied,” she says.

When Chief Minister Pinarayi Vijayan gives daily updates on the number of people under quarantine and released from quarantine, the number of food packets being supplied daily through community kitchens and other details, it is made possible by the collective hardwork of health workers including ASHAs at the ground level. Thousands of women volunteers like Thahira are now doing door-to-door visits and calling up people for information that will be sent to higher authorities. The Kerala model of fighting diseases relies on thousands of footsoldiers like her. After working for 12 years as a community volunteer, the honorarium she draws is Rs 4,500. Despite the economic crisis, the state government decided on a hike of Rs 500 for ASHAs from April onwards to acknowledge their contribution in combating the pandemic. “I feel privileged to be a part of this battle,” she says. 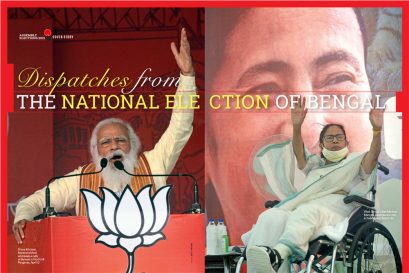 If the script runs along BJP’s expectations, then the party will have taken a tremendous stride towards its objective of an all-India footprint, in addition to governing a state widely considered beyond its reach. Any number in three figures for the party will be a massive advance 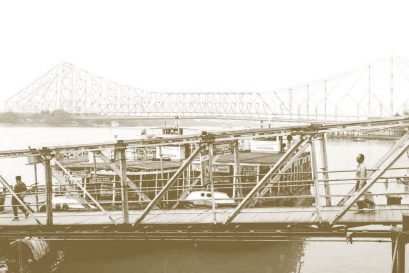 Along the unquiet Hooghly

What happened in Bijapur and why it can happen again