The Temptations of Tollywood 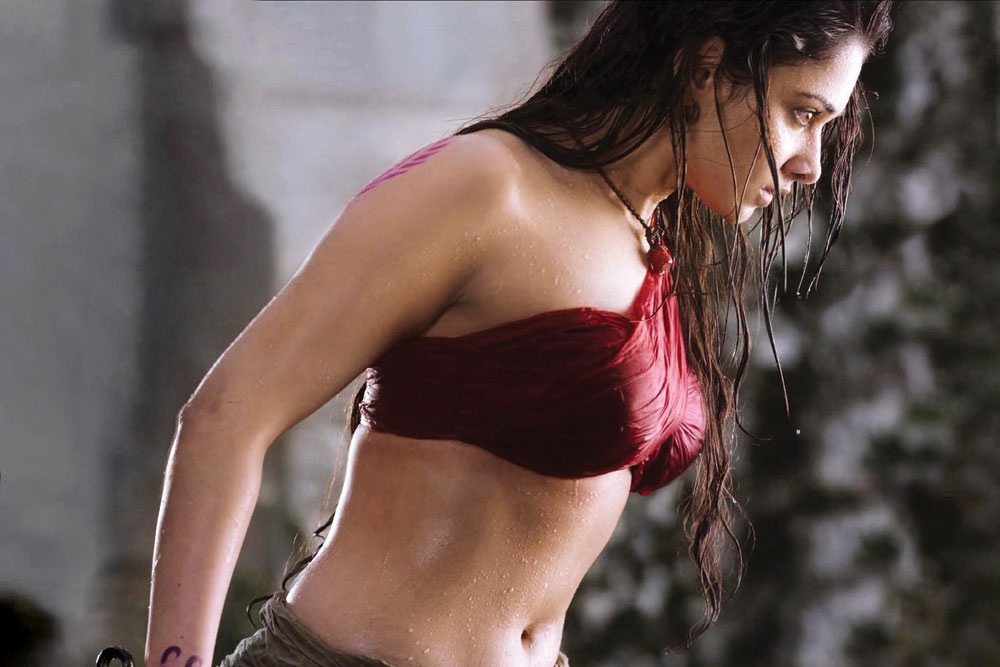 Tamannaah as Avantika in Baahubali


Telugu cinema, naa cinema, mana cinema; a bit of mallepoola vaasana rising past the miasma of pedantry, profanity, propa­ganda, and polarisation that is the media culture today.

Tollywood is now not just a regional footnote to Bollywood. Telugu cinema is local, national, and global. And to an ex­tent, this is happening on its own terms.

When did this happen? In the mind of the Indian public, some would say it was NT Rama Rao’s arrival with his MLAs in Rashtrapati Bhavan in 1984 that first sig­nalled our existence to the rest of India. The ‘Madrasi’ morphed overnight from stereotype into specificity, as our Anna, our Ramudu, set out to save Indian democracy from Prime Minister Indira Gandhi’s ill-advised attempt to topple his government.

Was that the moment when Telugu cinema and people first spoke as one to the world beyond our state(s)? Or was it the IT boom of the 1990s, when the soft­ware diaspora took over shopping-mall theatres to organise the latest Chiranjeevi blockbusters? That was still the diaspora though. The bigger crossover moment perhaps was Baahubali (2015), the bot­tomline box-office proof of arrival that said, loudly, colourfully, we are here, we are there, we are everywhere; and yes, we are not your Mehmood anymore.

And maybe even Baahubali was just the beginning. Maybe tomorrow will see more global success with a roaring revival of anti-colonial nostalgia like RRR. Or that day will come when we have one truly great, supremely crafted, Rajamouli Ma­habharata or Ramayana that will double-deliver on the worlds of both Peter Jackson and Cecil B DeMille.


I mention this possibility because this is after all the industry of Bhakta Prahlada, Maya Bazar, and Sri Krishna Tulabharam (starring the great NTR as Krishna and my mother, Jamuna, as Satyabhama), of poets, writers, and artist-directors like Bapu. What will it do to the imagination of a planet longing for meaning and aes­thetic experience when it takes the gods and goddesses back to a pantheon shat­tered and divided between the unnatural and political dichotomy of religion and myth? That is my hope, of the highest kind, for the art of Telugu cinema, that it will speak to an age ruled by cultural com­modification and amnesia of forgotten worlds that long to be seen, felt and heard, once again. It is my hope that somehow, even with all its quirks and faults, Telugu filmmakers will pull off globally what they have somehow achieved already in the rest of India, and that is, of course, what they like to call nativity.

Nativity was the main idea with which we began our Indian cinema class at the University of San Francisco this semester. It was prompted by two things. The first was the outburst of schadenfreude on social media over Netflix CEO Reed Hast­ings’ lament about his platform’s limited success in India. Twitter wits had a field day mocking what they described as the 50 wokes and their 50 friends who watch Netflix in India. For all its pride about rep­resentation, the people, apparently, weren’t really feeling it, their representation, that is.

The other news was, of course, Pushpa. And specifically, the use of the term nativi­ty to describe its pan-Indian appeal. This is a word that people in the industry (and fans) use unfailingly to describe something that at best translates from Telugu-English into English-English as sensibility perhaps. But nativity is not just any form of sensibility. It has been described as a form of cultural groundedness, a reflection in particular of the sensibilities of the working-class male viewer who sees courage, character, life and joy in movies like Pushpa.

Over 20 years ago, in the early days of liberalisation and amidst the rise of mall and MTV culture, Hindi cinema went through a makeover that critics described as the Riverdaling of Bollywood. Now, that makeover has gone even deeper into the American Dream (or Delusion).

It was in the recognition of things like the agency of a mother (Devasena), of a female warrior (Avantika), and the ‘humbleness’ of a hero that I saw hope for the global translation of Telugu Cinema’s nativity

Bollywood, it seems, got so busy pro­fessing its Representation Matters creden­tials, it forgot the very people in whose name it was telling its stories.

My students could pick up on the dif­ferences immediately; Chandigarh Kare Aashiqui seemed well-intentioned, but looked… American. Pushpa didn’t. Even a small-budget English/Telugu/Tamil/ Kannada/Malayalam/Hindi film made in Hyderabad by a Los Angeles-based filmmaker, about the women of India’s Mars Orbiter Mission, seemed to have it, while the big-brand MNC-Bollywood take on the same topic didn’t. Space MOMs had nativity, while the other one, well… it seemed to take educating the masses about their religious superstitions and native misogyny seriously I suppose.

As we started our semester with these opposite tendencies in Indian cinema that we named Nativity and Netflix for conve­nience, it seemed clear that Telugu cinema was going to figure a lot more in class than it had before.

Telugu movies have retained, or per­haps, re-imagined, what we have with familiarity and confidence called nativity. It’s not a code, a book, or a discourse. It’s not religion or nativism either, though the Riverdale equivalent of academia might see it that way.

Nativity, in Telugu cinema, I think has been about being comfortable in smallness (ironically, we will of course have to also consider nativity in the con­text of the opposite too, namely, Baahu­bali!). It could be rural, or urban, even rich or poor, but somehow, it has to be about the everyday, and the wits and wonders of being here in the everyday out of all places in the grand cosmos.

It could be Jagapathi Babu’s policeman character offering juice to everybody in the brilliant suspense thriller Anukokunda Oka Roju, or the hapless delivery workers dragged into a crazy situation in an apart­ment complex in Mathu Vadalara (Wake Up/ Kick Off the Nasha, Dude!). The word “jugaad” came and went in our commen­taries, in another context. But nativity has been something more, the realm of both representation, on the one hand, and some­thing like rasa, on the other.

Telugu movies might have had their masala years, but somehow, it seems like they are heading for more coherent gusta­tory formations within that too, layers of podi and pacchadi, avakaya, gongura, each one its own still uniquely glorious reality, as it were. The difference I suppose is that masala runs the risk of incoherence, over­statement, grease. But the pickles, they are who they are.

The cinema-as-food idea has its limits, of course, for sight and sound translate more easily than taste. Still, we might ask, what are the rasas that make up nativity? Do these travel well? Is the joy of connect­ing with Telugu cinema if you are not Telugu, or Indian, even, somehow a sign that nativity is not only about religion, lan­guage, or region, but something… cooler?

My students’ reactions to Baahubali tells me that there is hope for such a global- Tollywood dream. Baahubali reminded my diverse classroom of movies from East and Central Asia, and even Nollywood (the an­swer: god and Mother!). It was wonderful to see in my students’ words a world I associ­ate so much with my mother’s career and life reappear as ideas for their own future. It was in their recognition of things like the agency of a mother (Devasena), and of a female warrior (Avantika), and in the ‘humbleness’ of a hero who defers always to people, and even to animals, that I saw hope for the global translation of Telugu cinema’s nativity. “Even the flower petals and water bodies became characters in the story,” wrote one student, and I loved that rasa moment right there. Aesthetic lavish­ness is one thing I associate with Telugu movies of old in particular.

Yet, all the wonderful aspects of Baahu­bali apart, there were representation issues too. What about consent? Why would a nice guy tattoo a girl’s arm without her per­mission? What about the blackface trope, and the othering of the villains? I noticed things too, like the weirdly destructive un­dertones of the hero’s introductory scene which involves his uprooting a Shiva lin­gam. A cool look, no doubt, but a reminder that much of a cultural industry’s nativity is sometimes just hit and miss.

Telugus, like Indians, like most post-colonial peoples, are figuring out their cultural memories even as they negotiate the present and the future. When Indian cinema has its real revivals, I believe it won’t just be Telugu or Marathi roots we will find though but a much longer saga.

The industry today is after all only three or four generations from the pio­neers like Phalke, HM Reddy and others. If the first generation was deeply steeped in the ancient traditions of literature, the­atre and music, and the subsequent ones less so, the present day seems to be seeing a return, stumbling sometimes, to the smells and tastes of the ancient through their creative (and perhaps commercial) instincts. That is my hope of return for us all, after the pain, after the exile.

This semester, and my first real-life class in nearly two years, began with a new Telugu movie song, aptly enough. I saw my students in the auditorium waiting to learn for the next 16 weeks about Indian cinema, faces old and new, duly masked, of course. Some, known to me only via Zoom these last two long, difficult, years. We were back. Together.

‘Bham Akhanda’ (from Akhanda, 2021). It blasted. It soared. It needed no transla­tion. The sounds that fell from Shiva’s dhamru, after all, haven’t stopped reso­nating even after mil­lions of years. We live, and live again, and in that process of living, we find our voices, our joys and our powers, most of all.