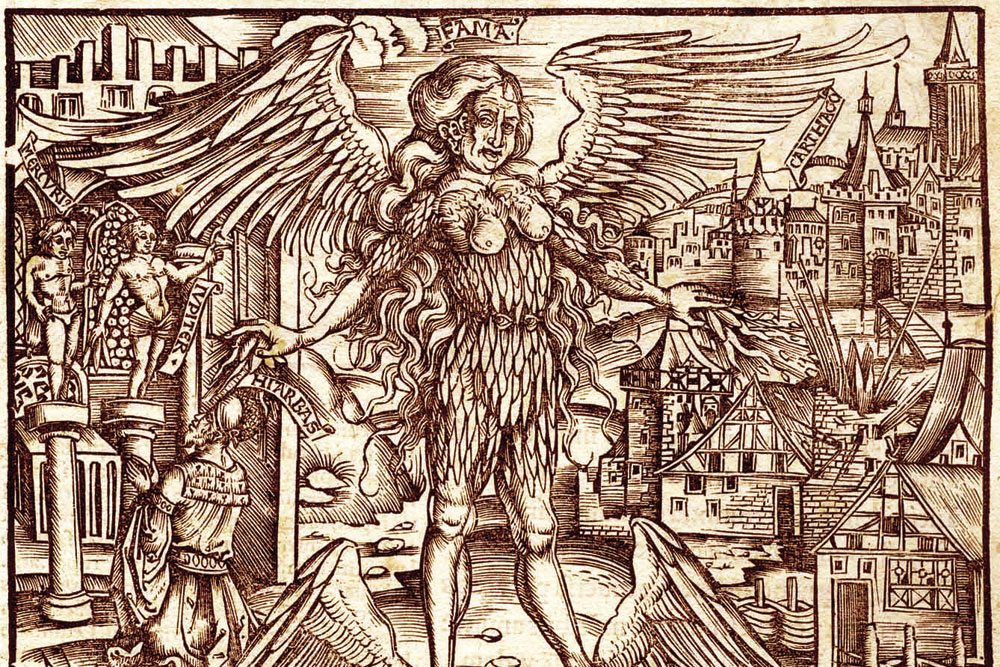 
Greek mythology can often tell us about the world today. Ossa (or Fama) was the Greek goddess or personified spirit of rumour, report and gossip. Her positive connotations were fame and good repute, and infamy and scandal were the bad. The Greek poet Hesiod portrayed her as a mischief-maker, quick to rise, impossible to silence. In Roman poet Virgil’s imagining, Rumour was “swift of foot and fleet of wing, a monster awful and huge, who for the many feathers in her body has as many watchful eyes beneath, as many tongues, as many sounding mouths, as many pricked-up ears.” Virgil’s description of Rumour is an apt sketch of today’s online post: “The swiftest of all evils. Speed lends her strength, and she winds vigour as she goes; small at first through fear, soon she mounts up to heaven, and walks the ground with head hidden in the clouds.”

As online exchanges get more polarised, as conversations slip into abuse, as untruths go viral, today’s tweet (or Facebook or Instagram post or WhatsApp forward) is indeed the swiftest of all evils. The online post just like Virgil’s Rumour is many feathered, it is constantly changing, it is heterogeneous and dynamic, taking different forms. Today it could be a reply to a tweet, tomorrow it could be a dick pic in one’s Direct Messages, and the day after it could be an online auction of women. The instantaneous and spontaneous nature of social media ensures that it is omnipresent. There is no hiding away from its surveillance. Social media with its many eyes and tongues both uplifts and shames. The often anonymous nature of online hate means that the perpetrator can wreak havoc in real time, while remaining concealed in the clouds. The online post, like Rumour, starts small, but in minutes it can rack up millions of likes and shares, spreading from here to everywhere. Rumour is relentless; she does not stop for “sweet sleep”, sitting on lofty turrets she frightens entire cities, filling them with “fact and falsehood”.

That is the thing about social media; its speed and spread, how it is a tool for truth and lies. Social media can be used for good—to create communities, to democratise conversations, to garner attention. But it can also be used for bad, to weaponise conversations, to target minority groups, to threaten and harm ideological or political opponents, to create divisions and to spread falsehoods. Hate speech online has been linked to a global increase in violence against minorities, including mass shootings and lynchings.

Ossa is depicted as a woman. And from Greek mythology to today, women are considered the spinners of yarns and storytellers. Gossip Girl is a trope, Gossip Boy is not. But if one were to look at social media today in India, women are disproportionately victims of online hate. The hate that women face online takes various forms, from abusive messages and sexual threats to doxing. In the online world, there is a disconnect between the severity of the punishment wished upon someone and the perceived affront. Rape and death threats proliferate because more often than not no action is taken against these posts.

In 2018, Amnesty International reported: “Twitter is a platform where violence and abuse against women flourishes, often with little accountability. As a company, Twitter is failing in its responsibility to respect women’s rights online by inadequately investigating and responding to reports of violence and abuse in a transparent manner.” The abuse that women face online hampers their ability to express themselves freely and fearlessly. Relentless abuse can lead to self-censorship and even risks silencing women.

Recent films and novels have vividly portrayed the effects of social media on women. Megha Majumdar’s 2020 novel A Burning is built around a young saleswoman’s social media post. Her post—If the police didn’t help ordinary people like you and me, if the police watched them die, doesn’t that mean that the government is also a terrorist?—brings the police to her door and her to jail. The novel shows how a girl with no connections will be made a scapegoat for a harmless post, while thousands of incendiary posts go unpunished.

Don’t Look Up, the recent science fiction film released on Netflix, is being celebrated for its smart and satirical take on climate change. But metaphorically speaking, while climate change is the comet charging from outer space towards Earth, social media (and capitalism) are the in-house apocalyptic forces. The film is the story of two scientists, Kate Dibiasky (played by Jennifer Lawrence) and her professor, Dr Randall Mindy (Leonardo DiCaprio), who discover a previously unknown comet that is sure to collide with Earth in six months’ time, causing “a planet-wide extinction event”.

To director Adam McKay’s credit, the film underscores the processes and perils of social media in two ways. It shows the gender biases of social media. And demonstrates social media’s ability to manufacture and spread lies. Randall and Kate are invited to a television talk show—which “keeps the bad news light”—to discuss their findings. At the end of a heated five-minute segment—where Kate evinces her displeasure at the anchors’ facetiousness—the public and media treat the two very differently. Kate is deemed the “yelling lady” and the bipolar “mullet girl”. Memes of her eating a child or comparing her to a crazed cat quickly go viral. Randall, on the other hand, is anointed the “Astronomer I’d Like to Fuck” and “Bedroom Eyes Doomsday Prophet”.

This short episode from a recent film tells us a truth that we see play out on our screens every day; women’s anger is openly reviled (as Soraya Chemaly says in Rage Becomes Her: The Power of Women’s Anger, 2019) and that women are all too often the targets of online hate. As recently as January 11th this year, the Editors Guild of India issued a statement condemning the continuing online abuse of women journalists.

Kate’s character personifies the weaponisation of social media against outspoken women. She is ostracised because she is angry, because she’s fed up with the prattle of anchors, because she dares to say, “The destruction of the entire planet isn’t supposed to be fun. Maybe it’s supposed to be terrifying and unsettling.” The women who receive the highest number of abusive tweets are often journalists, those who have opinions, those who have facts and articles that go against the establishment, and which challenge the status quo. Society has always condemned the anger of a woman and social media amplifies that disapproval. Chemaly, an author and “reluctant online hate/harassment expert,” writes that when women speak out, they are labelled as “crazy”, “irrational” and “demonic”—all of which Kate is seen to be. Chemaly elaborates, “When a woman shows anger in institutional, political, and professional settings, she automatically violates gender norms.” This violation of ‘feminine’ ways makes her the target of trolls.

The online hate and vitriol that women face is because society fears an outspoken woman. The lackadaisical approach of companies and the state to take action against online hate towards women shows their own complicity. The troll abuses the woman who owns her anger, who channels her anger, the woman who is unafraid to be herself. But it is this anger that could just save the planet from destruction.