The New Dalits Are a Thought Bank 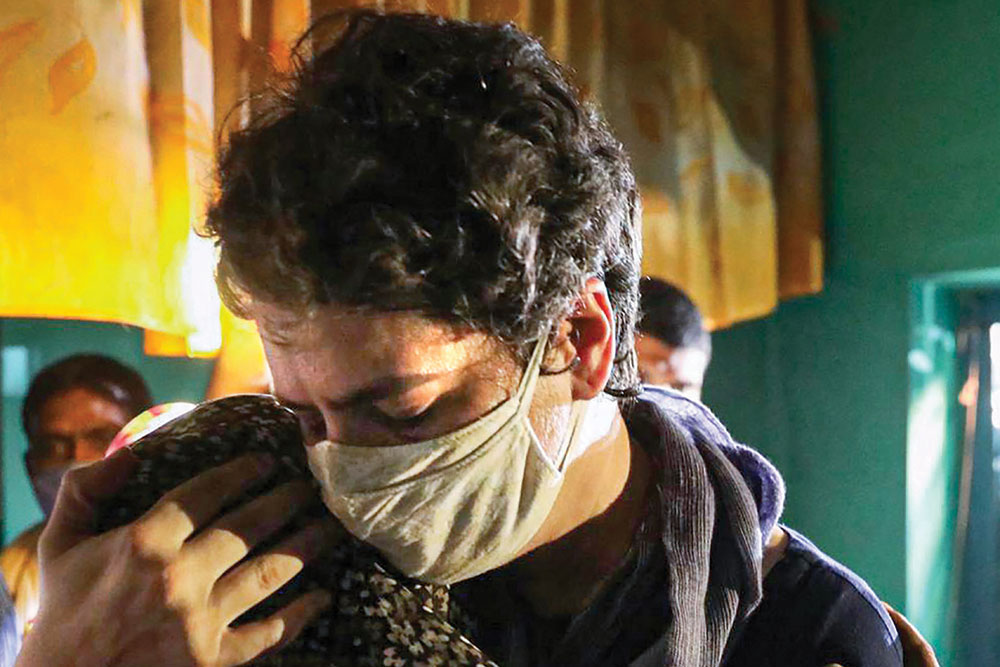 
THE POLITICISATION OF the killing of a young Dalit woman from Hathras, Uttar Pradesh is telling at many levels. The Congress under the leadership of Rahul and Priyanka Gandhi has made every possible attempt to turn the incident into one of caste and community. Becoming increasingly irrelevant politically, the party has been falling back on caste to revive its fortunes. Construction and manipulation of identities based on caste, religion and region seem to be their last resort for regaining power.

In the long run, this manipulation of caste will come back to haunt the Congress. While Hathras continues to dominate headlines, similar horrors have happened in Baran and Alwar in Rajasthan. Alwar is not too far from New Delhi. The Nehru-Gandhi scions could have easily gone there to express solidarity. But they purposely chose Hathras, keeping in mind the social backgrounds of the victim and the accused. This selectivity in outrage has been central to the imagination of these narrative-makers since 2014.

I HAVE ARGUED elsewhere that Dalits have been the cultural soldiers of our civilisation since the days of the Mahabharata and the Ramayana. Just consider how the Supreme Court verdict on the Ram temple in Ayodhya and the bhoomipuja were celebrated by Dalits all over the country. The Ramnami community in Chhattisgarh is a classic example of the inherent inclusive and integrationist nature of Hinduism. When they were not allowed entry into temples, they tattooed the name of Ram all over there body. Their bodies became the places of worship.

Kameshwar Chaupal has been a central figure of the Ram temple movement for the last three decades. He is also the member of the Shri Ram Janmabhoomi Teerth Kshetra as there is a provision for a permanent Dalit member. Like Kameshwar Chaupal, people who led the agitation for the temple such as Vinay Katiyar, Uma Bharti and Kalyan Singh also had a similar social origin. The entire argument of the left-liberal group pivoted on exclusivism has no resonance on the ground.


In the long run, this manipulation of caste will come back to haunt the Congress. While Hathras continues to dominate headlines, similar horrors have happened in Baran and Alwar in Rajasthan. Alwar is not too far from New Delhi. The Nehru-Gandhi scions could have easily gone there to express solidarity

Hindu culture is deeply inclusive in its philosophical foundations. The three major documents that continue to guide us are the Ramayana, Mahabharata and the Constitution of India. Anyone even with a superficial awareness of these three significant texts would be in a position to tell you about their authors. The Ramayana was recorded by Sage Valmiki, the Mahabharata by Sage Ved Vyasa and the drafting of the Constitution of India was led by Babasaheb Bhim Rao Ambedkar. All of them were from ‘socially marginalised communities’. The question that comes to our mind is natural. The controversy around caste as a political tool is a recent phenomenon bereft from any sociological and anthropological underpinnings. Therefore, the fake narratives created around the social faultlines need to be analytically understood and not politically manipulated.

The Ram temple will have soil from the Valmiki temples from across the country. From Ravidas to Kabir, the new temple is set to have the foundational aspect of social reformation. Even ardent atheists such as Ram Manohar Lohia have spoken about the spirituality of Ram that unites our nation and civilisation in his essay called ‘Ram, Krishn Aur Shiv’. Shabri and Kevat are central to the idea of Ram and indicate the deeply inclusive historical foundations of our culture and civilisation.

THE CONGRESS HAS systematically reduced Dalits to a vote bank. The Congress-led intelligentsia in the initial decades after Independence did not work on creating icons from the subaltern communities. In their quest to perpetuate the legacy of the Nehru-Gandhi family, they deliberately undermined the likes of Matadin Bhangi, Jhalkari Bai and Sardar Udham Singh who came from the marginalised communities but made the supreme sacrifice for liberating India from British imperialists.

The case of Ambedkar and Babu Jagjivan Ram is also crucial to understanding the Congress’ approach and its distaste for the community and its leadership. It was the Congress that ensured Ambedkar lost in the first General Election in 1952 (‘BR Ambedkar, the Congress critic who saw Gandhi and Patel as opposed to Dalits’ by Maneesh Chibber, December 6, 2018, Theprint.in). Ambedkar lost by almost 15,000 votes in the first General Election. The electoral verdict led to a judicial scrutiny.

The Congress has reduced Ambedkar to an anniversary on April 14th and a mere wall portrait. The present leadership of the party must first learn some history before invoking Ambedkar for political gains. It is the BJP-led National Democratic Alliance that has, in the last six years, iconised the intellectual colossus in letter and spirit (‘Government to develop five places as Panchteerth in honour of BR Ambedkar’, March 21st, 2016, India.com). Through projects such as the Dr Ambedkar International Centre in Janpath, New Delhi and policy initiatives such as Stand-Up India and Mudra, there is a renewed attempt to not just commemorate Ambedkar but also realise his vision.

Jagjivan Ram had to leave the Congress and form a new political outfit. He was another example of Congress’ tokenism when it comes to Dalit empowerment and social justice. It was under his stewardship that India won the war in 1971 that led to the emergence of Bangladesh. It has been acknowledged by foremost strategic thinkers such as Henry Kissinger and Gary Bass. However, not surprisingly, most Indians credit only the then Prime Minister Indira Gandhi, forgetting the role of the Minister of Defence. There is an urgent need to develop some solid scholarship around the life of the man who has the record of being a parliamentarian for five decades from 1936 to 1986 (‘Why No Bharat Ratna for Babu Jagjivan Ram?’ by Tarun Vijay, July 3rd, 2016, Indiatimes.com’). As a minister in various departments he introduced some long-lasting policy measures such as ‘paani pandey’ on railway platforms. It was reserved for the people from Scheduled Castes to serve water to passengers and officers who were travelling. With one single step, he attempted to end social ostracisation and empower the man at the bottom with a respectable job.

The Congress has reduced Ambedkar to an anniversary on April 14th and a mere wall portrait. The present leadership of the party must first learn some history before invoking Ambedkar for political gains. It is the NDA that has, in the last six years, iconised the intellectual colossus in letter and spirit

Both Ambedkar and Jagjivan Ram were deeply spiritual and religious. In a 1938 speech, Ambedkar said, “Character is more important than education. It pains me to see youths growing indifferent to religion. Religion is not opium as is held by some. What good things I have in me or whatever benefits of my education to the society, I owe them to the religious feelings in me”. He further observed, “Ethnically all peoples are heterogeneous. It is the unity of culture that is the basis of homogeneity. Taking this for granted, I venture to say that there is no country that can rival the Indian peninsula with respect to the unity of its culture.”

Jagjivan Ram was clearly one step ahead of his times. As an ardent follower of the Shivnarayani sect, he came from a school of thought that strongly believed in resolving the disputes of the family within the four walls of the home. Jagjivan Ram remained a devout Hindu throughout his life. His memorial at Krishna Menon Marg still has the Tulsi that he used to water as part of his daily puja. His daughter Meira Kumar, the first woman Speaker of the Lower House, has also recounted how a young Jagjivan Ram was offered Catholic education but the family refused, with his mother saying, “You will educate my son but you would also change his religion. I will be fine taking care of him as I can”. Isolating Dalit leaders from the country’s cultural consciousness has been an evil design. Hira Dom, one of the most underrated Dalit poets during the 19th century, has also vehemently spoken against religious conversion.

There must be a reason why we do not recollect the Congress cultivating leadership from the community. Even at the provincial level, we have memories of Damodaran Sanjivayya and Bhola Paswan Shastri as placeholder Dalit Chief Ministers in Andhra Pradesh and Bihar respectively. The question of leadership in the party’s organisational hierarchy is certainly out of question as it has been reserved for the so-called first family of the Congress. There has not been even a semblance of democratic decentralisation in the party when it comes to distribution of power and responsibility between various social groups. Social diversification at the institutional level must be pursued as a commitment.

There is no dearth of icons for celebrating social integration. From Narayan Guru and Ayyankali in Kerala to Chokhamela and Soyarabai in Maharashtra to Suheldev and Hira Dom in the Hindi heartland. Kalavve from Kerala deserves a special mention as she was the first ever recorded Dalit woman poet who spoke for social reformation.

This design of the Congress and left-liberal intellectuals to cause social unrest in the name of caste is destined to fail. Dalits are now much more politically conscious, culturally rooted and assertive. The new Dalit will not be entrapped by the politically manufactured strategies of the Congress. She has evolved and learnt to negotiate with those who have held sway over the corridors of power. With the advent of Narendra Modi at the Centre, there is a fresh sense of optimism in subaltern communities. In him we see ourselves. The New Dalit is not just a vote bank but an aspirational lot willing to be a ‘Thought Bank’.

Guru Prakash
Guru Prakash teaches at Patna University. He is a BJP spokesperson 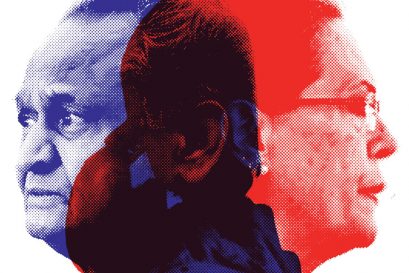