“I have not had a customer for two months. We have seen so much disease, but this is the first time I have seen something like this” 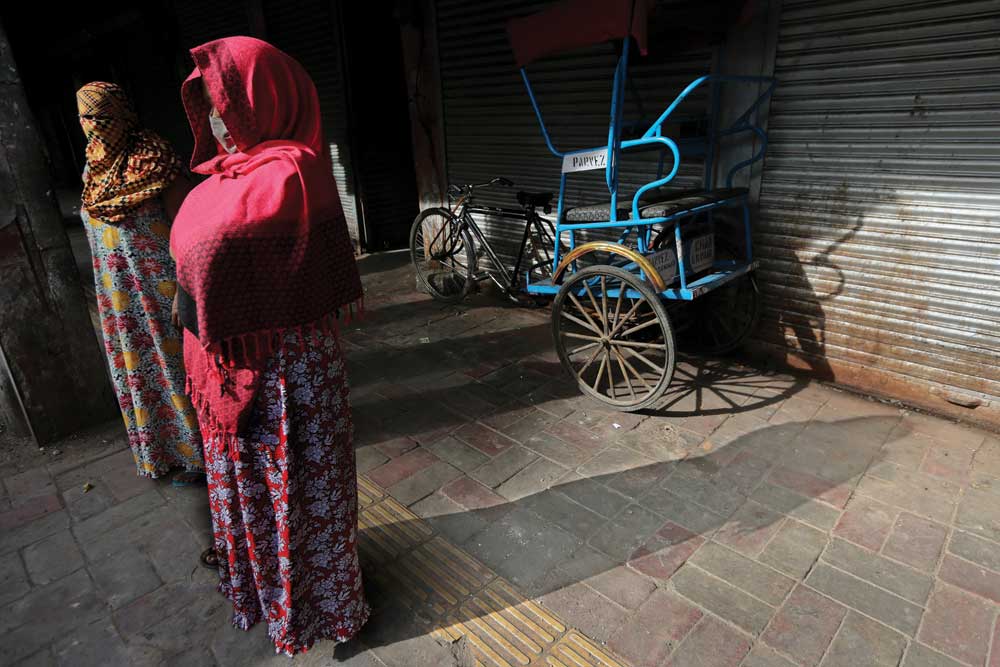 
Her WhatsApp display picture shows a roundfaced girl, with crimson lipstick, powder, heavy kohl on her eyelids, bindi, a nose ring and golden hoops in her ears. “She’s doing puja right now, please call a little later,” says a woman’s voice on the other side. In the afternoon, wearing a floral printed nighty and a dupatta covering half her face, Ramya (name changed on request) steps out with a group of women in tow, all dressed similarly, in the deserted street. There is no semblance to the photograph. There is no makeup on her face. She is not wearing any jewellery. “That’s a very old photograph of me. I am 60 now,” she says, laughing.

She recalls her past in broken sentences, reluctantly. As a child, wearing a traditional anklelength skirt and a short top, Ramya often played marbles with Sunil, a boy in her neighbourhood in a village in Karnataka. Whoever lost would have to become the ghoda (horse) as punishment, and the other would jump over. At 13, madly in love with 15-year-old Sunil, she boarded a train to Delhi with him. He promised her a job. Having lost her father a year ago, just around the time she attained puberty, she made the trip to an unknown place, with hope, innocence and desperation. Sunil took her to the Garstin Bastion Road, more popularly known as the GB road, the Capital’s red light area stretching over a kilometre from Ajmeri Gate to Lahori Gate, in the old city. He left her there and never returned. Her memories of him have got fainter over the years, or rather she has chosen to put them behind. That was also the only time she ever fell in love. “I never got involved with a client. I keep emotions out of it. I tell them it’s business,” she says, traces of a Kannada accent and bitterness escaping her indifference to the past.

Left with strangers, amidst the dingy staircases leading to dimly lit rooms with tiny windows looking down on the street, where life starts hustling after dark, her hopes lay shattered. It took longer for her innocence to be crushed. But she did land up with a job, which she needed to support her family in Karnataka. There was no place to run away to. “I had got tainted. Who would marry me? And, who knew what was right and what was wrong? I never thought about it so much.” Ramya made enough money to send some home, where she told her mother that she was working in an apparel factory.

Each night, Ramya would wear kohl, lipstick and powder and go down at 11 PM to solicit customers. There were days when she could manage 10-15 customers a night. As she grew older, the numbers dwindled, and so did the rates. There were many more girls in the business at GB Road, in congested quarters in the two-three-storey buildings over shops lining the street. She managed to earn around Rs 200-300 a night. There were days when there weren’t any customers. She would wait till 3 AM and then return to her room and sleep the rest of the night, waiting for the next day, hoping to earn a bit.

Every Monday, Ramya takes a break from the monotony of her routine. She has a bath in the morning and goes to the nearby Kali temple. She fasts, eating only milk and bananas through the day and one meal at night. Around 18 years ago, her life took another turn. She found out she was pregnant. “I didn’t get to know. My friends kept telling me my stomach was bloating because I eat too much rice. I felt some movement in my stomach and went to see a doctor. I was told I was pregnant and into my sixth month.” Her brothel owner was nice enough to tell her to take a break from her work, promising to give her three meals a day and waive off her rent for that time. If she earned Rs 250 a night, she would give her landlord Rs 150. Now, she works independently.

Her son is in school back in her village. She used to send home Rs 5,000-10,000 a month, depending on how much she earned, for her son and mother. She tells her son his father is in the army, away on a posting. She shows him a customer’s photograph, saying it’s his father. She has to keep earning. So Ramya goes on with her life. Her age and gall bladder stones have slowed her down. “Sometimes, I return most of the money to the customer when I feel I have not been able to earn it.”


“I have no money to take home. As long as I can earn, I will be here. Then I will return to my village. All I want is for my son to get a job and lead a better life ”

But those were pre-coronavirus times. Ramya still wakes up past noon. She cooks—on most days rice and lentils—washes, bathes. She eats, sometimes with 20 other women, sometimes alone. She changes from one nighty into another. She no longer goes down. There is nobody in the streets. Instead, she watches primetime Hindi news. Later, she tunes in to movies and serials on Kannada channels. At times, she sleeps off watching TV. “I have not had a customer for two months. We have seen so much disease, but this is the first time I have seen something like this,” she says. As she narrates her woes, she tells a woman, also a sex worker, to stand at a distance. The coronavirus awareness has sunk in. For the over 1,000 sex workers of GB road, it is a catch-22, a battle between the epidemic and hunger. Ramya’s is the quintessential story of a sex worker on GB Road, named after a British commissioner who had brought five brothels in the city together in one street.

Business had started waning ever since the coronavirus, which has brought the world’s oldest profession to a halt, raised its head in the country. With the lockdown, it came to a total close. Along the road, the police maintain a strict vigil. A policeman on a motorcycle stops to ask if we are from an NGO. The inhabitants of GB Road have been asked to lock their doors. “Even when we go to buy milk and medicines, the police tell us to go up. They say there are cameras everywhere. These are very difficult times. We know it’s to protect us, but how will we survive?” she asks. She and other women of GB Road say that a police van distributed cooked food for some days and NGOs provided rations, but for the past four-five days they haven’t seen them.

Ramya is uncertain of what lies ahead. She has told her mother that because everything is shut, she is not getting her wages. Once in around six months, she would dress up as a married woman, wearing a sari, sindoor (vermilion) and toe rings and make a trip to her village. Back home, she has told everyone she is married. “I have no money to take home. As long as I can earn, I will be here. Then I will return to my village. All I want is for my son to get a job and lead a better life.” Ramya knows that in the time of social distancing, her life is unlikely to return to what it was, in the near future at least.

“For them, the lockdown will continue for many more months. Everybody is scared because of the uncertainty,” says Anurag Garg of Kat-Katha, an NGO working at GB Road for the past eight years with a vision to end “forced sex trade”. On April 7th, Kat-Katha, with the support of district authorities, police and NGOs like Goonj, NoTears Foundation and Marwari YuvaManch distributed rations and hygiene kits for a month to over 700 families in 78 brothels in GB Road, in a Covid-19 relief drive.

Garg says realising that this is going to be a long struggle for sex workers, Kat-Katha is looking at various options like medical supplies and healthcare facilities, mental wellbeing and awareness and phase two of ration distribution drive to support them. The law, the Immoral Trafficking (Prevention) Act, is ambiguous on the status of sex workers. While paid sex, a minimum of 200 yards away from any public space, is legal, brothels and pimps are illegal. The women of GB Road call their rooms their homes. “This is the time when government should recognise the fact that these women exist and need support of more than food packets. They need medical facilities, health checkups, awareness and alternate livelihood opportunities,” he says.

Iqbal Ahmad of Bhartiya Patita Uddhar Sabha, an organisation working from GB Road, says there is worry that till this disease comes to an end, the women are unlikely to be back in business. “The media comes here. They speak to us and go. They write, but these women are bitter that their voice does not reach those concerned.” According to him, the women are now living on the rations given by NGOs, but many of them do not have money for medicines.

Ramya is now living on whatever savings she has and the rations given by NGOs. She is trying to save it as much as she can. Her life in GB Road is on pause. All she wants for now is to be able to go back home.