Being non-Covid patients in the time of a pandemic 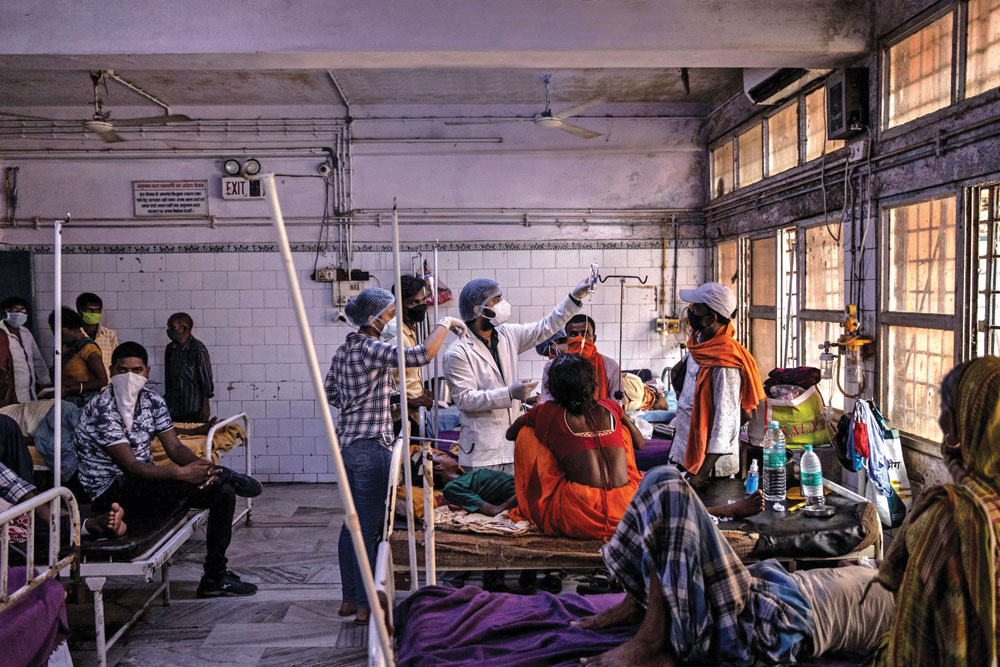 
When Sadhna, 62, wife of Ved Prakash, a retired Army officer, got high fever in September, the family went into a tizzy. A former cancer patient, Sadhna ensured she and her family took every precaution possible and then some against Covid-19. The fever subsided the next morning only to be replaced by an altogether terrifying development: excessive blood in urine. “By that time we knew this was a problem related to her other health concerns but we were still on the fence about going to the hospital,” says Prakash. As it turned out, the decision as to whether Sadhna should go to hospital or not wasn’t really the family’s to make but the hospital’s. It began with Artemis Hospital in Gurugram where Prakash was told that his wife’s condition was serious enough to warrant immediate admission—but they had no beds available. Of the two Army hospitals in Delhi, Base hospital was handling only Covid-19 patients while Research & Referral was prioritising serving personnel over retired. “We went to at least four hospitals and called up nearly every big one in Gurugram but every time we were told there were no beds.” In the case of Columbia Asia Hospital in Gurugram, the hospital first agreed to admit Sadhna and even started the paperwork but the minute it realised Prakash was seeking admission under the Ex-Servicemen Contributory Health Scheme, it said no beds were available, Prakash alleges. The family did find a hospital in Gurugram finally but only after tapping some influential contacts. All this unfolded over 28 hours during which Sadhna’s condition kept worsening.

Ved Prakash’s struggle to get a bed for his wife during the pandemic is a small example of what patients—both Covid-19 and non-Covid-19—and their families across the country are going through. From shortage of beds to lack of transparency in treatment to exorbitant bills and struggle to get access to non-Covid-19 treatments, the average Indian has been hit by a strained healthcare infrastructure that was already creaky to begin with.


From shortage of beds to lack of transparency in treatment and struggle to get access to non-Covid-19 treatments, the average Indian has been hit by a strained healthcare infrastructure that was already creaky to begin with

In the first week of June, a ‘rate card’ attributed to Max Hospital Patparganj in Delhi started doing the rounds on social media where the daily rate of an ICU bed with ventilator was Rs 72,000. Max Hospital explained that the rate included fees for all routine tests, medicines, doctors and nurses but it was enough to cause panic. Public pressure was enough on the government to control the rates in private hospitals and by June 20th, the government had prescribed maximum per-day charges. An isolation bed was capped at Rs 10,000; ICU without ventilator support was to be charged Rs 13,000-15,000 and with ventilator was capped at Rs 18,000. Private hospitals, as expected, were up in arms, complaining these prices were not feasible.

Rajinder Saxena’s sister was admitted to a Delhi hospital in June for Covid treatment under the government notified cap but on discharge he found that he had been charged for things which should have been included in the package but weren’t. His sister was conscious throughout and had kept a track of medicines consumed and even doctor visits and they found that the hospital had inflated nearly every aspect of their bill. “More advanced critical care, talent—all these are the strengths of big corporate hospitals in India. In the case of Covid-19, complications can mean a prolonged stay for a patient and hospitals will not discharge you unless you are completely stable. For instance, hospitals claim a certain amount of personal protection equipment (PPE) use each day. It is an easy item on which to inflate numbers. It is difficult to understand what families are being charged for in the final bills,” says Malini Aisola, co-convener of All India Drug Action Network (AIDAN). The organisation is at the forefront of helping patients get redress. Aisola can go on citing cases of patients from all over the country who had no one but civil society organisations to help them as hospitals overcharge on the pretext of the pandemic. There have been instances of hospitals refusing to hand over bodies to families due to unpaid bills in defiance of court rulings.

PPE is an easy item for inflating numbers. It is difficult to understand what families are being charged for in the final bills, according to Malini Aisola, co-convener of All India Drug Action Network

When Ashish Chatterjee’s elderly cousin felt feverish on September 10th, the family was immediately on the phone with their doctor. A diagnosis of probable typhoid was given but on September 15th, the patient developed breathing difficulty. “My cousin was 62, diabetic and overweight. He kept saying he would not go to a hospital. He believed that if he went in, he won’t come out. We didn’t listen to him and took him to Fortis in Noida.” From the general ward where he was admitted, Chatterjee’s cousin was moved the next day to the Covid-19 ward after the hospital said his test result was positive. “We got a video from the attendant that day in which my cousin can be heard talking about the things he needs, including a pair of slippers so that he can walk up and down. That was the last we saw him conscious. We were informed of requirements like plasma via phone calls or messages. The hospital did not ask us about his medical history so that Covid-19 treatment could be adjusted accordingly and our attempts to reach out, engage were stonewalled. Even the daily updates we got were a hardwon privilege.” Chatterjee’s cousin’s situation deteriorated on September 19th when he had to be put on the ventilator. He died on September 21st of a heart attack. “It has been a month now and we still don’t have any answers as to how it all accelerated. Was he even really Covid positive? There are questions galore and no answers.” Lack of transparency and violations of patients’ rights are just some of the issues families are struggling with even as hospitals continue to obfuscate processes.

The Chatterjee family was still lucky that their bill (upwards of Rs 5 lakh) was settled by the insurance company without a fuss. Most patients, especially those who have been handed bills upwards of Rs 10 lakh, find themselves running from pillar to post trying to deal with both the hospital and the insurance company. People complain of policies that start with a reasonable enough cover only to be exhausted midway through the treatment. Hospitals also segregate insured patients by not admitting them under the government cap scheme even as some insurance companies refuse to cover expenditure above the government cap. Even those who are aware of how hospitals and companies are failing them have nowhere to go in the absence of a redress mechanism. In the end, civil society organisations have to step into a role the state should have played.

The Insurance Regulatory and Development Authority of India had in March itself declared that all health policies will cover Covid-19 treatments but most health policies don’t offer any coverage on consumables, usually identified as medical equipment which is discarded after use. Before Covid-19, consumables were a minuscule part of hospital bills; now consumables, such as PPE kits and masks, comprise a big chunk. In September, the General Insurance Council, the industry body for non-life insurers and standalone health insurers, appealed to the Supreme Court against exorbitant pricing by hospitals arguing that if lack of transparency in billing continued, it would have a direct impact on premium rates, making insurance policies unaffordable. As it is, insurance reach in India is extremely low with the National Sample Survey in 2018 revealing that over 80 per cent of Indians have no health cover. A study released by the Public Health Foundation of India the same year had revealed that out-of-pocket health expenses had driven 5.5 crore Indians into poverty in 2011-2012.

As the bulk of the country’s healthcare system has turned its focus to Covid-19 treatment, non-Covid patients are struggling. While a lot of private nursing homes and clinics were shut owing to the pandemic, people are also worried about catching the virus by going to hospital. And those who do make their way to hospital find that they have to pay more for the same services. Those who are seeking admission, quite like Sadhna, have to move from one hospital to another, hoping some luck and a few good contacts will get them a bed.

The pandemic has laid bare the cracks in the Indian healthcare system but AIDAN’s Aisola also believes that Covid-19 could well turn out to be an inflection point for India. “The fact is that there has been no rate regulation in the Indian healthcare industry. Players like insurance companies did not play their part well and now they are realising they are being fleeced. [The pandemic] could be a major turning point for bringing in regulation. Already more than 20 states have brought in a cap for Covid treatments,” she says. Every time there is a Bill concerning hospitals and healthcare, price regulation is the first thing to be dropped. “Bodies like [the Indian Medical Association] which should have been allies [of patients] work for private hospitals,” she says, referring to the petition filed by the association against the extension of the government cap on Covid treatment prices in Maharashtra.