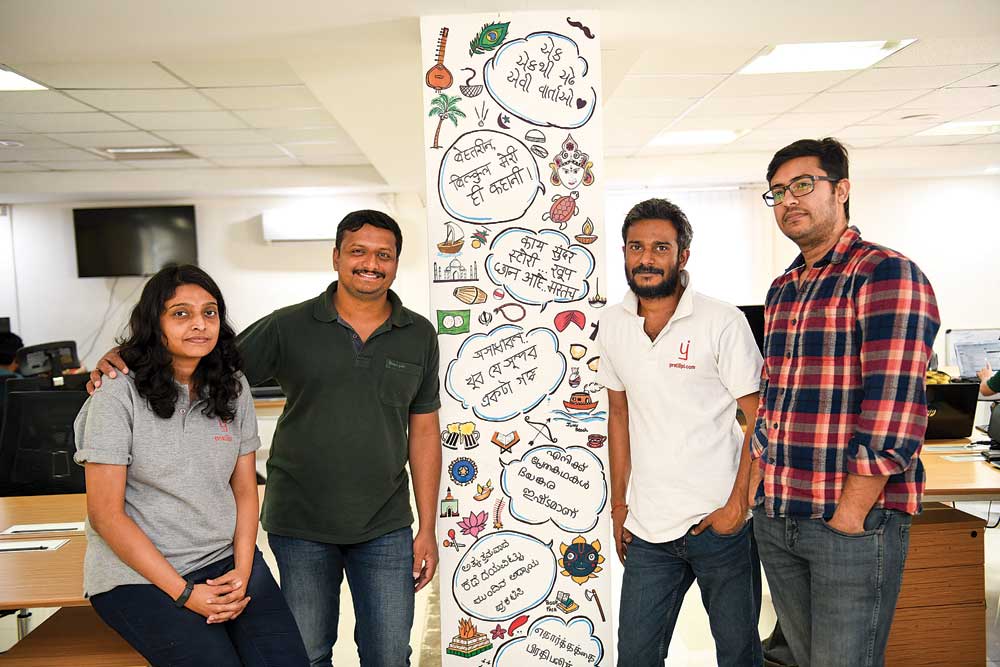 Storytelling is the oldest of all arts. As humans, we have always told stories, and we’ve always listened to them. Stories and memories were narrated around the camp fire. Stories of yore didn’t have a single author; they passed from person to person, with each individual adding or subtracting at will. But what is the modern equivalent of that camp fire? Where do we huddle seeking the warmth of camaraderie and the glow of communal wisdom? The answer would be the internet.

The online world is often seen as an essentially democratic world, one where everybody and anybody can have their say. Where anyone can tell their story. But the internet as we all know is dominated by English; 55 per cent of all online content is in English. In this scenario, where can a Tamil engineering student, a Marathi Ajji or a Bengali babu seek out stories told for them, by people like themselves? A few years ago, the now 30-year-old Ranjeet Pratap Singh asked himself a similar question. His solution took the form of Pratilipi (‘pratilipi’ means ‘copy’ in Sanskrit), a platform that allows you to read and write your own stories. Today, its tag line proudly reads: ‘The world’s largest platform for Indian languages’.

Singh is a good example of the power of stories. Speaking on the phone from Bengaluru, he says, “When you read about people who come from a similar background as you, or a less privileged background as you, who went on to do great things, you feel like that is something you can also do. One of my favourite sayings is that there are two ways to teach someone to build a boat. One is you get them to do a course or programme, you teach them to do X and Y. The other is you give them hope and dreams about what lies beyond the sea, and people will figure out their own way to build a boat. Because they want to explore what lies beyond the sea. Stories, I think, essentially have the power to do the second part.”

Clearly, investors have also bought into the idea of the power of stories, and the potential of Indian language internet users. A 2017 report by KPMG India and Google estimated that Indian language web users will number 536 million by 2021, accounting for 75 per cent of its total internet user base.

Pratilipi—which started out with a website and now has an app with over a million downloads on the Google Play Store—raised $4.3 million in an A- series round of funding led by Omdiyar Network (as reported this February by Inc42). Its founders—Singh, Sahradayi Modi, 31, Rahul Ranjan,30, and Sankaranarayanan Devarajan, 30—were also part of Forbes India’s ‘30 under 30’ list of enterpreneurs to watch out for in 2018. Prashant Gupta, one of its co-founders, has since parted ways with the company.

Given the data that Pratilipi has access to, what is most interesting is the profile of the Indian reader and reading habits that emerge. Singh says stories on society, family, romance and friendship are the most popular in Bengali; pulp fiction is the most read in Hindi; Tamil readers are fans of science fiction; and romance and thrillers seems to have universal appeal. Even while stereotypes can be accused of razing nuance, these preferences show us how certain generalisations—the Tamil science nerd, the moony Bengali, the trigger-happy UPite—can be true.

Singh says that 70 per cent of the readers are young (age 18 to 34) and, interestingly, 62-63 per cent of them are female. But for him the most interesting facts revealed by the data are those which dispel preconceived notions. He says, “Experts say that people don’t want to read long-form stories and that attention spans are going down. But that seems absolutely ridiculous.” His evidence for this is that the most read story on Pratilipi is Meri Avantika by Abhidha Sharma (on the website ‘number of readers’, as of today, for this story is 321,447), which was published this January, and takes close to 19 hours to read. The comments at the end of this Bollywood-type story with plenty of twists and turns, hint at its popularity, with readers leaving emotional posts such as ‘Y khani jb pdna shuru kia maine to jase ek junoon sa ho gya tha.’ ‘When I started reading this story I fell into a passion.’ On Pratilipi, the length of the story has proved to be no deterrent to readers, which again goes against conventional understanding of online readership and reading habits in general.

“Most people think that Indians consume a lot of content, but they don’t create high-quality content. Again, I think that is ridiculous,” says Singh “When we started, most people said that it would be impossible for more than 1,000 people to write high-quality content. Of course, ‘high-quality’ is subjective. But I definitely think we’ve high-quality written by a lot of people.” The completion rate on Pratilipi is around 65 per cent, meaning that if someone starts reading a story on Pratilipi, there is 65 per cent chance that they will read that story till the end, or, in other words if a user clicks on 100 stories, they will completely read about 65 of those. The high completion rate reveals that readers are not getting bored, but finding content that keeps them engaged.

While there is no dearth of the smart or timely business idea online, Pratilipi has succeeded because it identified and fulfilled a basic need. The founders came together because they could all identify with this need for stories in their own language. Rahul Ranjan grew up in Bihar, and studied in Anpara and Patna; Sankar is from Tirunelveli in Tamil Nadu. Singh, CEO of Pratilipi, hails from the village Fattepur, about two hours from the nearest town Raebareli in Uttar Pradesh. He grew up on illustrated publications such as Champak, Chandamama and Chacha Chaudhari. But these weren’t easy to procure. He would save his pocket money to borrow comic books, paying 50 paise for any comic that cost less than Rs10 and Re 1 for any comic that cost more than Rs10. Dissatisfied with this arrangement, he made a deal with his math teacher RK Singh. A bright student, he promised to work even harder at maths if his teacher gave him his library card, as teachers could borrow more books than students could. Singh says, “School reading was because of RK Singh’s library card.” As he grew older, he started ferreting out books from his mother’s collections, which included novels by writers such as Ved Prakash Sharma, Surendra Mohan Pathak and Om Prakash Sharma, and magazines like Sarita, Grahshobha and Saras Salil. After completing a BTech in Computer Science from KIIT University, Bhubaneswar, and an MBA, Singh worked as an area sales manager for Vodafone. He quit and started Pratilipi in August 2014.

The initial focus of Pratilipi was literature and fiction. Even today, 60 per cent of the content is fiction. But now on its pages online you can find a range of reading matter, from a book on theoretical physics and quantum mechanics to how to draw an intricate rangoli.

Pratilipi is not a publishing house; there is no submission or editing process. As Singh says, “Think of us as a YouTube for stories; you upload what you want to upload. And the algorithm will try to figure out who are the readers most likely to read it, and reach it to them.”

As a company, outreach has been essential to its vision. The app is available only on Android, and you don’t need to have a high-end phone to access its content. With its readers spanning Ahmedabad to Patna, Kochi to Jaipur, it was essential that the content be easily accessible and not dependent on the whims of 4G. Singh explains, “We are very clear you don’t need a smartphone per se to access Pratilipi. As long as your phone can support a browser of any kind, you can read and write on Pratilipi. We’ve used a lot of technical bandwidth to try and ensure that we can support almost all browsers on almost all devices.”

As of now, all content on the platform is entirely free. But in a year or so, the founders plan to make 2-5 per cent of it subscription based at a nominal rate. It has also launched audio books on a selective basis in Hindi, Gujarati and Tamil. The future that Pratilipi envisages for itself and its online readers is a truly democratic desi one: access to stories by everybody, for everybody.