Waiting for the Stimulant 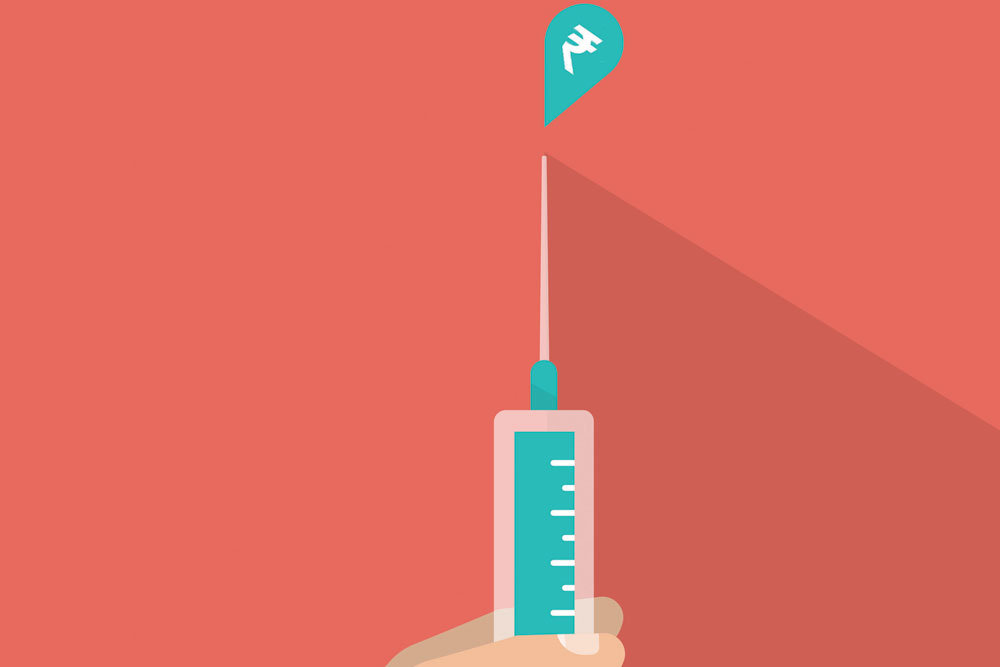 
If 2020 is any measure of the depths of despair that India had to confront, 2021 has begun on a tangibly positive note. Several different trends show that the elusive ‘normalcy’ may be at hand sooner than later. If 2020 has one lesson it is that forecasts—especially when numbers and quantities are involved—are hazardous.

Even with these caveats, several things have changed for the better and this fact clearly hints at a much better economic performance this year. The approval given to two vaccines manufactured in India and their forthcoming rollout will decisively put an end to mobility issues that had severely dented the
Indian economy last year. Even without the vaccines, the link between the rising number of cases and mobility restrictions had been broken by early October; the vaccines will act as insurance over and above this.

Probably the most important effect of the vaccination programme and the restoration of mobility will be one of enabling the Government to undertake a fiscal stimulus without fearing that money will be frittered away or lost to corruption and leakages. The constant carping of economists of a particular political persuasion through 2020 was that the Government was not spending money. It turned out that there were very good reasons for not doing so. Reports from Britain and the US indicate how even well-designed stimulus programmes are subject to leakage and those initiated during the pandemic disappeared into an economic blackhole.

With an economy dominated by the services sector, it would have been impractical if the Government were to inject money in a stimulus programme when the economy was gripped by severe mobility problems. If one compares mobility data at the time when the first Atmanirbhar Bharat programme was launched (May 12th, 2020) with mobility trends at the start of this year, the contrast is stark. Google mobility data for the week of May 16th showed a (-)41 per cent change in mobility at workplaces compared to the baseline at that time; on January 1st, 2021, this had improved to (-)29 per cent. In case of transit stations/public transport, the comparison for those two dates is (-)52 per cent(May 16th, 2020) versus (-)11 per cent (January 1st, 2021). Clearly, this is conducive to the recovery of services and the possibility of the Government engaging in a meaningful stimulus.

The possibility of the Government spending more to give a helping hand to the economy has increased for another reason: the greater availability of resources as compared to the time when the pandemic hit India and when lockdowns were imposed. In April and May last year, there was a virtual collapse in the collection of the Goods and Services Tax (GST), severely handicapping the Government’s ability to spend. On top of that, there was an ugly spat between the Union Government and the states on GST compensation. All that seems to be a bad memory now. From September onwards, GST collections have been robust and have gone up every month on a year-on-year basis. And in December last year, these collections were the highest ever recorded since the GST was rolled out in July 2017.


If one re-reads the dire prognosis issued between June and September last year, it is striking that fiscal stimulus is emphasised repeatedly but not a word is spoken about the design of a stimulus package

These trends are likely to continue this year. But one lasting damage inflicted by the pandemic is in terms of employment and inequality. This is a complex and unfolding situation but some trends are already visible. Job losses, especially those in low-skill, low-wage segments, are likely to exacerbate inequality that was already high. This is not just a moral question of helping those who have lost their livelihoods but an economic one as well. Severe or permanent loss of income has a direct bearing on demand and, in turn, output. This cannot be ignored by the Government for both political and economic reasons. At the same time, its ability to ameliorate this situation is extremely limited.

The other trend that will be worth watching is about trade and globalisation and what happens to them. Ever since 1991, a crucial part of India’s economic fortunes has been its openness to trade. What 2020 showed was broken supply chains over and above an already strong sentiment against globalisation. The virtual cornering of medical supplies by China and the race to secure them among other countries have left a lasting impression on the world. Henceforth, supply chains are likely to be re-forged and located within national jurisdictions much against the economic logic of locating them on the basis of comparative advantage. That is among the motivations for the Atmanirbhar Bharat plan. In India’s case, an additional complication is its dependence on China for a huge number of items it consumes and its border conflagration with it at the same time. India is already taking steps to reduce its dependence on China and this will continue this year. Two big economies of the world disengaging from each other will only further fuel the trend of de-globalisation.

The Covid-19 pandemic is easily a once-in-a-century event of extreme uncertainty. Epidemiologists to administrators across the world were hit with a situation that defied their models and accumulated empirical wisdom. From April 2020, when the pandemic began galloping, reliable estimates of how many persons would get infected and what would be the rate of recovery were subject to near continuous revisions to the point where science became more an art.

Economists, especially those in India, too, were subject to the same uncertainty. But that did not deter them from presenting estimates and policy prescriptions. It seemed as if they were immune to uncertainty. One of the more interesting sets of forecasts, at all times, is the bi-monthly Survey of Professional Forecasters (SPF) conducted by the Reserve Bank of India (RBI). For the past nine months, these forecasts have swung wildly in their estimates. In early April, when the 63rd round of the survey—with data collected from economists between March 6th and 19th—was released, the estimates for GDP and other economic indicators were more or less tranquil. GDP growth for 2020-2021 was estimated at 5.5 per cent. The more interesting part of the survey deals with the probabilities assigned to different growth estimates. The highest probability (34 per cent) was assigned to the possibility that India would grow at 5 to 5.4 per cent. It was March 2020 and knowledge of Covid cases was common. Yet, the possibility that the pandemic could have a severe economic impact did not reflect in the SPF estimates: only 4 per cent probability was given to the possibility that growth may be lower, at 4 to 4.4 per cent.

By June, these estimates had swung to the economy contracting by 1.5 per cent; in early August, a further contraction to 5.8 per cent was announced and, finally, by early December, to the more realistic 8.5 per cent contraction. But by then two sets of quarterly data (for the first and second quarters of 2020-2021) were available. There are two further, technical, bits of information. One, the various probabilities for GDP growth rates continued to be scatter shots—spread all over the place—instead of the neat clustering in March, reflecting a close consensus. Two, if pessimism crept through the year, reflected in the various SPF rounds, extremely high optimism for growth in the next year (2021-2022) went up as the year progressed.

This quick summary of what is a complex technical exercise is not meant to castigate the economists who participate in various rounds of SPF but is meant to suggest how difficult forecasting the future remains even after the phenomenal advances in forecasting tools.

Yet, these large swings in economic forecasts have not prevented other economists from maintaining consistent policy advice through the course of the pandemic: the Government had to spend more or else India would be doomed economically. This consistency is so remarkable that one is forced to suspect that there is a political element in it and it is not just dispassionate economic advice. To an extent, this was expected as the tested remedy for recessions and depression and is Keynesian in nature. But what these economists refused to see was that, unlike a usual recession/depression where effective demand fails due to economic reasons, this was a pandemic where labour was forced to flee cities to save its life. How is Keynesian medicine to be administered and to whom? If one re-reads the dire prognosis issued between June and September last year, it is striking that fiscal stimulus is emphasised repeatedly but not a word is spoken about the design of a stimulus package. There was, to be sure, some noise about transferring money to the poor and those who had lost their jobs. But even a moment of reflection will show that people in such a situation are the least likely to spend the money received: they are certain to hoard it in the face of extreme uncertainty. Quarterly data on savings released by the RBI and the money injected into and taken out of Jan Dhan accounts captures the reality of precautionary savings vividly and pours cold water on the notion that transferring money would automatically lead to higher spending.

It is interesting to compare the rather stingy spending of the Union Government with what happened to the large stimuli carried out in Western countries. In those countries, as recent reports indicate, much of the money did not reach those for whom it was intended. In contrast, the Atmanirbhar packages were designed as immediate support for micro, small and medium enterprises (MSMEs) along with guarantees for these firms. What this did was to prevent leakages and corruption that run-of-the mill stimulus programmes end up being. If there is one trade-off the Narendra Modi Government was acutely aware of, it was the one between higher government spending and higher corruption. Through the barrage of criticism and economic adversity, it did not let that happen.