The Man Who Gave Us Wings

A requiem for the travel agent 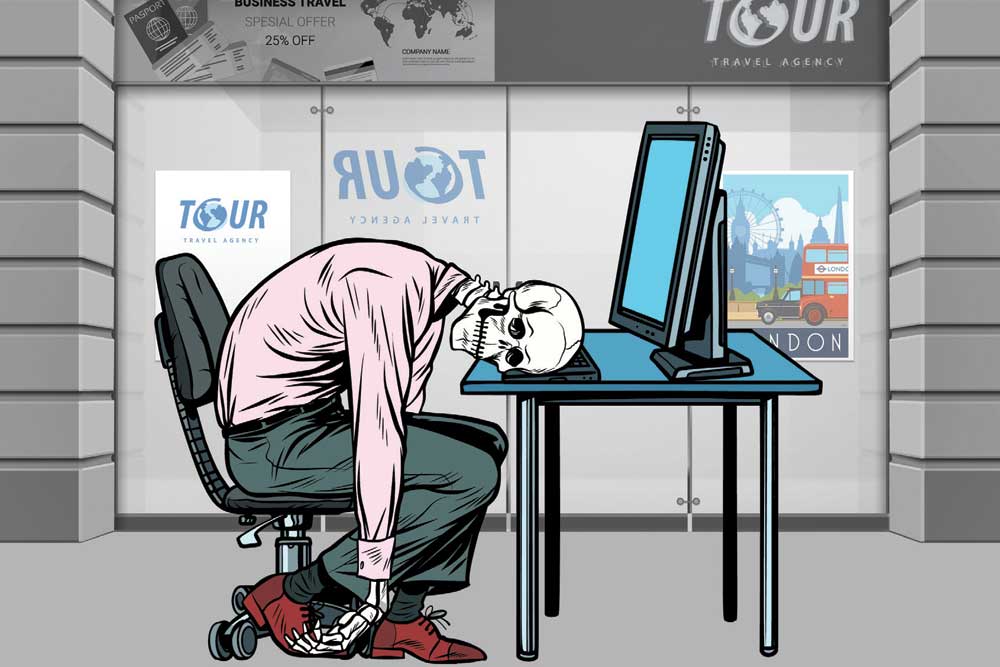 THERE ARE MEN and men with halos around their heads, but it’s a truly edifying experience to encounter one whose radiance is kaleidoscopic. This man’s was neither like a solar orb, sedate and static, nor like an angelic aura, heavenly and hollow. It was unique. The first time, it was black and furry, like an inverted beehive mounted on red; on the next occasion, it was pale green with metallic spikes and a fiery torch held aloft to its right; and the third time round, his head was crowned by a clock under a spire, though my memory of it may not be too reliable. He was seated behind a desk in a brick-and- mortar office with erratic lighting. Also, this was the pre-internet era, back when emotions outlasted images, and all I can vouch for is the bundle of nerves I was.

Taking a foreign trip involved being lifted off planet Earth and if anybody could intercede with higher forces to make this happen, it was him. Earning the displeasure of a travel agent was decidedly unwise.

He saw me nod. Either that, or he read my mind, am not sure which.

“Jee,” I replied, tentatively, leafing my old passport open to prove as much.

“Bahrain,” I said, my throat stirring to life, “Isle of two seas.”

Bad response. Along with a glare, it got me a sermon on the risk of loving more than one sea. It was always a slippery affair, he explained, this business of venturing out: two could become three, three could become four, and then five, six and seven, a count that India’s ancient seers had cautioned everyone against, lest the ascent of one’s soul got thrown into jeopardy.

The rest of me, though, could safely be winged across to my desired destination of London, funds willing, for that was exactly why he was there. He was a dream merchant, after all, there to transform the sensory world of all those who invested their faith in him. Adding precision to his promise, he stubbed his desktop calculator and turned its grey screen at me. The sum looked unduly large, but this was only an illusion of the device’s digital display, he said. Once this budget was placed at his disposal, he had only to work the phone—and perhaps hold his palm up—to bless the vacation. Okay? Okay. “Tathaastu,” he seemed to say. So be it.

Not that he could conjure a holiday for me out of thin air, it turned out. Placing thickets of paper under my nose for me to scrawl on, he put every detail of my identity to scrutiny. If citizenship was a terrestrial accident of birth, his queries made it clear that my passport renewal would call for a cosmic twist of fate.

Thankfully, the man across the desk had his resources. He dialled a dealer in the dark arts of destiny who could pin my nomadic life to a fixed address on the map for the quick issuance of an all-new booklet.

Exhibit No 1 thus conjured, my agent flicked open what looked like an espionage dossier to coach me for my visa interview at the British High Commission— specifically, on how best not to sound like an economic refugee. The finer points escape me, but the drift of it was to pledge every breath of British air to the touristy and nothing but the touristy (so help me, fraud), while feigning feudal lordship over vast tracts of land or other such imaginary assets back home.

The visa, as he insisted, had to be won on the credibility of my spend-and-depart plan for the UK. To boost my chances on this score, he got his dot-matrix printer to produce an itinerary that would not let me stray too far from Sterling soakers along the Thames.

The sight of that printout made me even more edgy. The stated purpose of my visit was already at odds with my ulterior motive, which was to pursue a lost romantic cause in Bradford, 276 km north of London. But then, given the infamy this city had acquired as a hotspot for fanatics out to set Rushdie’s latest novel aflame, an earnest confession of an iffy amorous pursuit might only have aroused suspicion.

Not to worry, said my agent. With a little extra effort, my tourist credentials could be made to rest almost entirely on a return air ticket, ‘ex-Delhi’, and his mastery of flight schedules could take care of that. He pulled out one datasheet after another riddled with encoded squiggles and declared success with stage one of the exercise. He had my name down for an ‘open’ ticket, ex-Delhi, as he said again (as if to rub in the probable futility of the whole trip); a pucca reservation was ideally made only later. This was the way it was done, a prudent measure to save everyone trouble (and him presumably money) in case my dates needed to be juggled (or the plan scrapped) for some reason.

Needless to report, the travel agent was endowed with more than just a shape-shifting halo. Never having ventured beyond a sixth sea, perhaps he also had something of a sixth sense. The passport arrived in due time, but the trip fell through for no evident fault of his. His sway, impressive as it was, did not extend to the whims of a woman two-and-a-half seas away, and that was that.

MY TRAVEL AGENT is probably long gone. There is no trace of his office on Google Maps. The colourful posters on the wall behind his desk must have peeled off and turned into compost by now. His landline number is lost. And nobody seems able to look him up online. What’s more, this is the age of direct contact. As an ‘intermediary’, the fellow could not have survived this inevitability of the internet called ‘disintermediation’—cyberbabble for the elimination of a middleman. In theory, the efficiency of this shift is obvious (as Yossarian observed of a fully- bandaged soldier fed and drained by tubes in Catch-22). Who needs a go-between now that globe-trotters can trot around the globe at the swipe of a handset? In practice, however, the redundancy of the travel agent is not an open-and-shut case yet. The empowerment of information is all very good, but the directitude of the digital era has also meant direct exposure to the maze of infinite loops that almost every sarkari website is (Indian or otherwise) and spelt more than a fair share of exasperation over such silly things as having to squeeze scans of documents into tight spaces with stingy kilobyte limits set by cyber sadists.

If there’s anything in the rigmarole that makes me miss the good old travel agent a little less, though, it’s the part under private competition: spotting a good set of wings. For this, there’s nothing better than Google Flights, especially its fare calendar. For the cash-constrained like me, it’s Relief with a capital ‘R’.

While having a ‘doer’ do the job sure has its appeal, no halo can hold a flame to the joy of getting away from the madding crowd by the dint of one’s own agency without losing an arm and a leg.