The legend of the Indian monsoon

Text and Photographs by Ritesh Uttamchandani

Text and Photographs by Ritesh Uttamchandani | 03 May, 2018 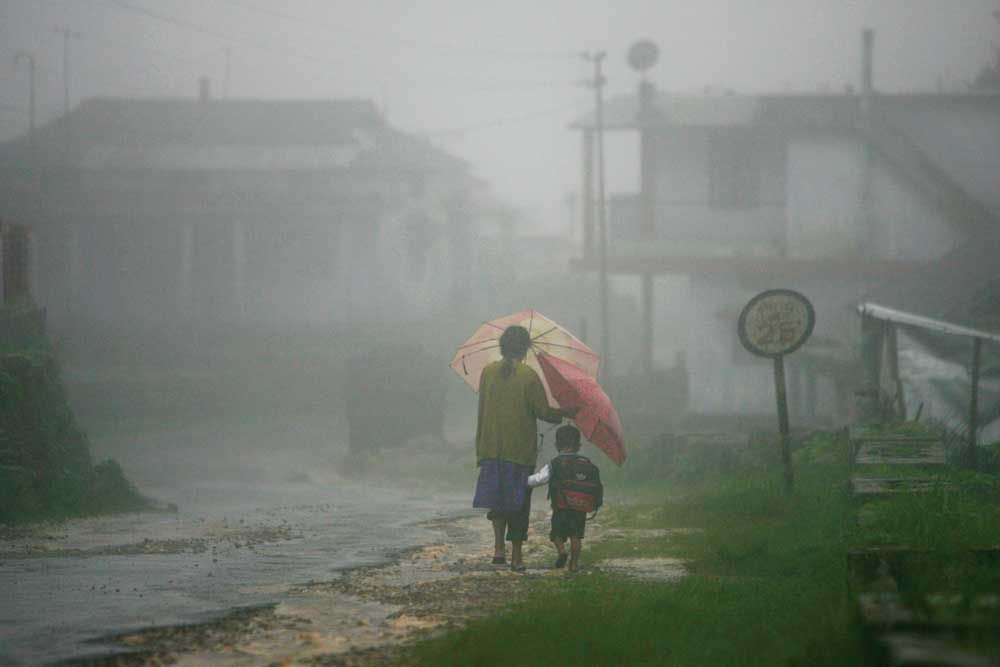 IN MORE THAN a decade of lugging around a camera bag everywhere I go, I am yet to come across any photographer who doesn’t have a love-hate relationship with the rains. Monsoons are when lenses become foggy, cameras mouldy and batteries dead. My worst torment so far has been Mumbai’s deluge of 2005. As I was stepping out of my housing society, our secretary blocked my way, saying it is too risky outside. I gently nudged Saraf uncle aside and began taking photographs of the building’s sweeper trying to cross the flooded street armed with no more than grit and a broken umbrella.

There have been good times, too, though. Like when I tagged along with a musician friend, the pint-sized powerhouse singer Shilpa Rao, to Petrapol on the Indo Bangla border in 2016. She performed for a hangar full of border security forces from both sides. It had been raining all night and it continued through the day of the concert too. “Yahaan baarish band hi nahin hoti,” said the soldier who often offers to bring me discounted liquor from the Army canteen (which I politely refuse). What struck me most acutely was the ‘bandobast’, a man walking in a waterlogged compound of the Integrated Check Point, balancing a plate of steaming kebabs for a joint lunch—probably the most delicious ones I’ve ever had, second only to the Galoutis of Lucknow.

Further ahead, in Meghalaya, clouds wander aimlessly long before and after the showers. The fragrance of lal cha and pork wrestle for supremacy over your senses, crosses of graves on hillocks on the way to Laitlyngkot emerge from the fog at every turn, while kids stick closer to their parents. If you know Bernie and Rajesh or Samrat, my friends in Shillong, they might take you to idyllic hamlets that are straight out of a dream. If not, you can see some of them on your way to a cave expedition in Jaintia hills. At Police Bazar, after I bought some cool clothes and shoes, a man buying old currency notes asked me if I had been to Cherrapunji, the wettest place on earth. An archer stepped in to dispute him, insisting that Mawsynram is, but a Marwari seth at Mishtan Bhandar scowled and asked us to either come in and order, or move away from the entrance of his shop.

In Ladakh, the rain usually arrives with the tourists. Resort owners hustle about to install toilet tents for the hordes of Innovas that will soon take over Pangong Tso, infamously also known as the 3 Idiots selfie point. Clouds dancing at will and gentle showers cooling the harsh sun made me wish I could stay here forever, till a Honey Singh song snapped me out of that delusion.

Closer home, I find the rains of Maharashtra and Goa are as alike as they are different. And as much as I love trekking, my camera bag makes the climb harder for me than the rest, but once down the summit, nothing comes close to the feeling of biting into that steaming hot vada pav. I remember being commissioned once by a travel magazine to photograph the best homestays on the Konkan coast in peak monsoon season. Every beach seemed like it was mine, empty and plastic bag free. To make life easy, I hired a local rickshaw and we snaked through villages eating at ‘Gharguti Khanavads’ whose laterite boundary walls had a fluorescent carpet of moss. Like in Kerala, everything that’s left outside and untouched for more than a week gets draped in a coat of green. Or sometimes, plastic.