A template for austere affluence 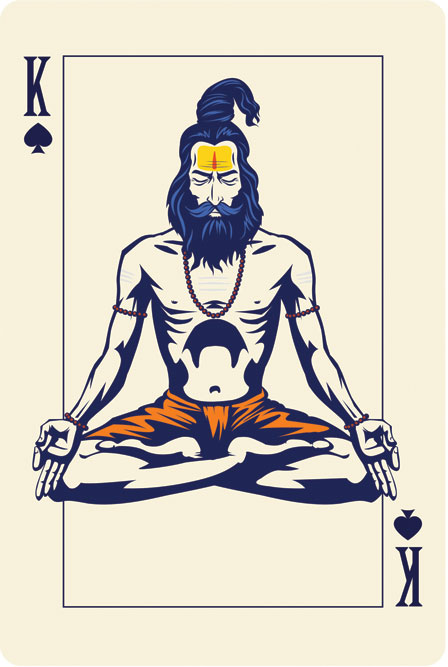 
SOMEONE RECENTLY asked me about the Sacred Books of the East series, published between 1879 and 1910. Not all 50 volumes were about Hinduism. Volumes on Hindu­ism covered the Vedas, Upanishads, three Gitas, Dharmashastras, parts of Shatapatha Brahmana, Grihya Sutras, and Vedanta Sutras. In parallel, some Sanskrit literature was being trans­lated, like Kalidasa. Today, we rightly complain about the quality of transla­tions, about Western translators not getting nuances right, then, and even now. While that is true, I wish to point to a selection bias, reinforcing the stereotype that Hinduism is about the other world, about freedom from samsara (bond of worldly existence), about knowledge of adhyatma and pursuit of moksha (emancipation). If one chooses texts for translation and dissemination that way and perceptions are formed on the basis of these translations, what else should one expect? Hinduism is about the pursuit of four objectives of human existence, known as purusharthas. These are dharma, artha, kama and moksha. As the texts themselves tell us, among crores of individuals, only a few will strive for and achieve, mok­sha. The rest are in samsara, pursuing dharma, artha and kama. Those texts on Vedanta are not necessarily meant for them.

The functional classification of the varnas became rigid and he­reditary over time, not initially. Nor is there any evidence to indicate that rigid compartmentalisation of the four varnas ever existed. Why else, in Bhagavad Gita, would Arjuna talk about the dharma of jatis and the dharma of kulas? What about fishermen (dhivaras) and hunters (kiratas)? If one is going to subscribe to straitjacketing, fishing was not an ac­ceptable occupation for the Brahma­nas, Kshatriyas, Vaishyas or Shudras. This means there were varnas outside those four. There are several instances (not just Vishvamitra) of an indi­vidual born into one varna practising the permitted profession of another. But let’s leave aside the varna debate. The point I wish to make is different. There were layers within the Brahma­nas, as there were layers within the Kshatriyas. But broadly, both Brah­manas and Kshatriyas were predatory classes. They survived on the wealth created by others, the Vaishyas. How much do Dharmashastra texts tell us about codes of behaviour for the Vaishyas and Shudras, as opposed to the Brahmanas and Kshatriyas? Sure, there is a listing of occupations and professions permitted, but not much beyond. Therefore, that point about selection bias. To use a forced analogy, if I visit the engineering section in a library and conclude there was no knowledge of literature, that is hardly a valid perception.


The word artha has the nuance of wealth generation, while the word niti has the nuance of good policy. Applied to the king, the latter is, of course, no different from rajadharma. But the dividing line between the two is thin

In terms of purusharthas, there were texts about artha and kama and the pursuit of these. Kama is desire and sensual pleasure in general. It is pandering to the senses, not merely sexual pleasure. We have reduced our knowledge of Kamashastra texts to Vatsyayana, eroticism and sexual positions (only one of the seven parts in the text). Vatsyayana himself mentions earlier authors—Nandhi, Shvetaketu, Babhravya and Dattaka. While some of these texts, transmit­ted orally, did not survive, some succeeding ones did. But typically, we haven’t heard of them. A Western (read Victorian) morality, implanted and imbibed, generally meant we preferred to ignore how liberal our values on kama were. Ditto for artha. The substance of the texts is that there must be equilibrium between the pursuits of dharma, artha and kama. Each, pursued to excess, disturbs the equilibrium. For example, a king (like Yudhishthira) is told to spend eight hours of the day in pursuit of dharma, eight hours in pursuit of artha and eight hours in pursuit of kama.

If artha was important, there must have been texts on Arthashastra. Indeed, there were and Kautilya’s Arthashastra isn’t the only one. Every society functions under a given set of laws and rules. We use the word governance for this, and governance is beyond government alone. If asked about the governance template of those times, most people will men­tion Kautilya’s Arthashastra. Today, if we know about Kautilya as the author of Arthashastra, that is largely because of Rudrapatna Shamasastry (1868–1944). In 1905, Shamasastry discovered the manuscript of Artha­shastra in the library of Mysore’s Ori­ental Research Institute. References to the text existed, but the manuscript itself had been lost. He published the Sanskrit edition in 1909 and an English translation in 1915. Though other manuscripts of Arthashastra have subsequently been discovered in other parts of the country, Shama­sastry’s name is interwoven with that of Arthashastra. There have been several books about Kautilya (LN Rangarajan, Balbir Singh Sihag, Satish Deodhar and Sriram Balasubrama­nian), especially in recent times, and it is good that people have begun to explore Arthashastra not only with the lens of Sanskrit and Indology, but also with that of economics and governance.

In the huge Sanskrit corpus, there is much that is about dharma. There is an explanation that goes—that which holds up is dharma. Dharma holds up everything, dharma holds up society. But there are so many nuances to dharma. That is the reason, in different contexts, dharma means moksha dharma (the dharma of liberation), good behaviour (better referred to as sadachara), raja dharma (the duty of kings), the dharma of the four varnas and ashramas and our own individual svadharma. Hence, governance is also about dharma.

Today’s government is what the king was then. In a manner of speaking, Prithu was the first king.

There are many possible words for a king—nripa, bhupa, naradhipa, kshi­tisha. These are synonyms but mean slightly different things. If asked for a word for king, most people will probably think of raja, more accurately, rajan. Rajan, etymologi­cally, is someone who gives delight. A king is known as rajan because his rule delights the subjects. There were kings before Prithu, but none of them was a rajan. Prithu was the first rajan, and therefore, he is also referred to as the first king. These days, we expect a lot from the gov­ernment. The government should do this. The government should do that. As individuals and as a community, we have abdicated our roles. That abdication only ensures bad governance. In that day and age, the king’s role was limited—ensur­ing external and internal security, ensuring an efficient dispute resolu­tion mechanism, punishing the wicked and protecting the virtuous. The rest of governance was ensured by individuals and the community. This comes across in our texts. This is also the picture painted in Arthashastra. As a caricature, in a pure form of capitalism, which doesn’t exist anywhere in the world, all decisions are taken by markets and individuals, says Adam Smith’s invisible hand. As a caricature, in a pure form of socialism, which doesn’t exist anywhere in the world, all decisions are taken by the state, and the government. The Indian template of dharma, or governance, offered a third alternative—some decisions were taken by individuals, some decisions were taken by the community and some decisions were taken by the king/govern­ment. We thus had a minimal bas­ket of tasks the king or government was supposed to do and there was a set of tasks individuals performed without the rod of individual or cor­porate social responsibility being invoked. The words ishta and purti, often used together, are examples. Ishta can be translated as “sacrifice”, but purti is best translated as “civic works” and “purti” was undertaken because it was an individual’s dharma to do so. However, there was yet another layer between the individual and the king, and that was the community or collective. More than anything else, it is this that has fallen into disuse.

It is important to realise that Kautilya’s Arthashastra belongs to a broader template and corpus. A couple of years ago, in 2019, the official Economic Survey quoted both Arthashastra and Kaman­daka’s Nitisara. Kamandaka, or Kamandakiya, described himself as a disciple of Vishnugupta (Kauti­lya’s name) and extolled him. In the course of this, he also says that Vishnugupta churned the ocean of Arthashastra to produce the amrita of Nitishastra. The word artha has the nuance of wealth generation, while the word niti has the nuance of good policy. Applied to the king, the latter is, of course, no different from rajadharma. But the dividing line between the two is thin. Many aphorisms attributed to Chanakya/Kautilya are not from Arthashastra, but from Chanakya’s Raja-Niti. An instance of this is a quote that is a great favourite of finance minis­ters, the one about collecting taxes like a bee, without damaging the flower. This is from Raja-Niti, and not from Arthashastra. The point is a simple one. There were earlier works on Arthashastra, texts that didn’t survive. Chanakya’s work built on those and improved on those and was, in part, a bhashya, or commentary. There were authors who preceded Chanakya and there were authors who succeeded him. The ones who preceded are called purvacharyas by Kautilya, and he was the most illustrious of them all. In any event, among those who followed, there was no one who could match his intellectual prow­ess. As an extrapolation of the same point, Arthashastra ideas exist not only in the text that has this name but also in Valmiki Ramayana, Ma­habharata (such as when Bhishma is lying down on his bed of arrows in Shanti Parva) and the Dharma­shastra texts.

Deepavali is a time when we celebrate the creation of wealth, and the pursuit of artha. No, Indian thought wasn’t only about the other world.