The Heart of the Song

Lata sang for all of us. Her voice was instantly recognisable. Whoever the star, she brought us into the heroine’s inner life 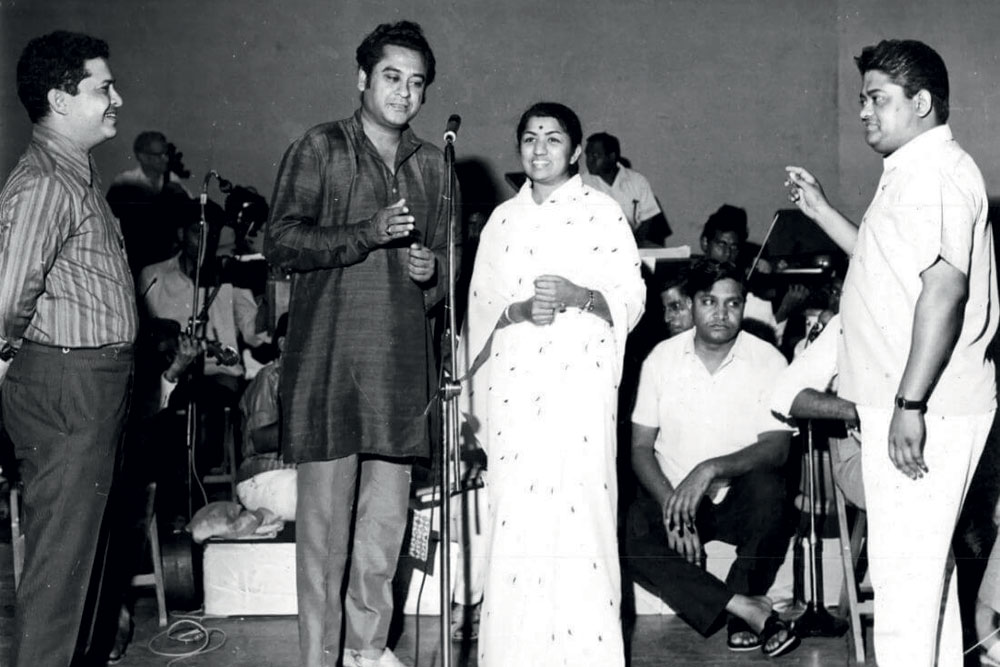 
Lata Mangeshkar has had a state funeral and two days of national mourn­ing. People are truly shocked. Even though she lived to 92, Lataji was so much part of our lives, someone whose national status in India was unquestioned, that her loss is felt personally, even among the millions who didn’t know her. She was an iconic figure, instantly recognisable—ironically for some­one who was seen on film only decades earlier—but was the voice for many of the great Hindi film heroines, the nation and all of us as individuals.

Before the last rites were performed, many have said, on social media and in ‘print’, that they didn’t like her; that her singing had ‘gone off’; that she was rightwing, imperious and crushed the careers of others. Please. This is not the time to speak ill of the dead, but it is when we should reflect on why she touched the lives of so many people so deeply. Snide remarks have been made about her personal relationships, but she always maintained a dignified silence unlike some of her companions.

I didn’t know her well and I can’t write about Lataji as a person, though people whose opinion I esteem were very fond of her. Yashji (film director Yash Chopra) always called her “didi” and they had decades of friendship and memories to share. I met Lataji a few times and she was always very friendly, though I suspect that may be because she found my fandom and stuttering Hindi memorable. She was like a small bird, bright-eyed in a simple white cotton sari, with dazzling diamonds.

The film industry was a difficult place for women in the early days as even the public regarded it as disreputable (think of Guru Dutt’s Kaagaz Ke Phool, 1959). The more I hear of Lataji’s life story, the more interesting I find it. She has been attacked for her Brahminical behaviour, even though her maternal line was from the Gomantak Maratha Samaj, a Bahujan community which includes devadasis. The caste component of the film industry is rarely if ever discussed in these terms, but Lataji ‘Sanskritised’ herself, augmenting her great, perfectly pitched voice with hard work, winning the fight for dignity and respectability.

The association of the film industry with the world of courtesans, and the performing arts in general, must have been extremely challenging if one wished to be seen as a creative and skilled artist. Lataji’s struggle for proper rec­ognition in terms of earning a decent livelihood and being treated respectfully and correctly should be seen in this light. Many of the early singers, from Gauhar Jaan onwards, were tawaifs (courtesans). It’s said that Lata’s high-pitched voice was to distance her from the earlier tawaifs but her speaking voice was also high, as was her laugh. Her range of comfort was effortless in the higher registers, though not strikingly different from that of Western sopranos. It’s also said she possessed the childlike voice of the private inner world of the home. This prompted me to look again at some of her films where this is clearly not true.

Although Lataji’s first hit music was in Majboor (1948), the film that really launched her career was Kamal Amrohi’s Mahal (1949), though she had great hits the same year with classics, including Raj Kapoor’s Barsaat and Mehboob Khan’s Andaaz. She sang all but one song (‘Ek Teer Chala’) for the ethereal heroine, Kamini (Madhubala), the disembodied voice announcing ‘the ghost’ is around or will appear with her songs of love and despair.

All the songs in this film are sung by women, for men who will not fulfil their desires. The songs of the abandoned wife and the tawaifs are sung by Rajkumari Dubey and Zohrabai Ambalewali in the tawaif style.


In Bimal Roy’s Devdas (1957), the woman of the home, Parvati, has a song only as a child, a duet with Devdas, ‘O Albele Panchhi’ (Asha Bhosle and Usha Mangeshkar), while she listens to two Baul songs (‘Aan Milo’ and ‘Saajan ki Ho Gayi’, sung by Geeta Dutt and Manna Dey). Mubarak Begum sings, in the more tawaif style, ‘Woh Na Aayenge Palat Kar’, but we don’t see the singer who is performing offscreen. Lataji sings ‘Jise Tu Qabool Kar Le’, the song of Chan­dramukhi’s lament for her lost love, but also two mujra-style songs: ‘Ab Aage Teri Marzi’ and ‘O Aanewaale Ruk Jaa’. In this film, Chandramukhi is the courtesan who yearns for love and a domestic life with the man she loves, Devdas, although this cannot happen because he and Parvati are tied by an eternal bond. Even in the mujra, Vyjayanthimala portrays Chandramukhi as modest and refined and Lataji’s voice matches this presentation of beauty and romance without emphasising her sexuality.

Pakeezah takes a maudlin story and turns it into a work of astonishing beauty, its visuals, music, lyrics and dialogues creating a hyperemotional melodrama with the purity of the heroine’s heart contained in each of Lata’s songs

Perhaps the most paradoxical of Hindi cinema’s courtesans is Sahibjaan in Kamal Amrohi’s Pakeezah (1972), the pure one. Ghulam Mohamad’s extraordinary songs form one of the greatest soundtracks of Hindi filmi music. Lataji sings all the songs for the eponymous Pakeezah, the virginal courtesan, who dreams of love and escape from the kotha (brothel) where she is a zinda laash (living dead). The music requires technical mastery but the lyrics and song situations demand a depth of emotional expression to convey the feelings of this beautiful, yet seemingly tragic, heroine to complete the aesthetic saturation of beauty, romance and nostalgia.

The spectacular ‘Inhe Logon Ne’, which is Sahibjaan’s first public performance, uses a folk tune that had featured in ear­lier Hindi films, including a version by Shamshad Begum. The earlier versions (which can be seen online) are sung in a tawaif style. Lataji’s song is shimmering, her perfect phrasing and pitch for a virginal courtesan in the other songs sung in the (kotha), including ‘Thare Rahiyo’ and ‘Chalte Chalte’, of the longing of a young woman for love, are measured and far from the usual mujra lyrics and style. The final dance, ‘Teer-e-Nazar’ is full of heartbreak and passion as she literally bleeds for love. Her happiness in ‘Mausam Hai Ashiqana’ where she experienc­es the beauty of nature far from the claustrophobic kotha and the ghostly ‘Chalo Dildar Chalo’, shot in moonlight with the ghungroos, accompany her disembodied voice.

There are background songs not picturised on the heroine featuring the singer Rajkumari Dubey, an expert in thumri, such as ‘Najiriya ki Maari’, reminding us of the contrast with Lata Mangeshkar’s pure and innocent voice, which was earlier heard in Mahal.

Pakeezah takes a maudlin story and turns it into a work of astonishing beauty, its visuals, music, lyrics and dialogues creating a hyper­emotional melodrama with the purity of the heroine’s heart contained in each of her songs, which are applicable to us ordinary folk too.

Lata sang for all of us. Her voice was in­stantly recognisable, whoever the star, but she brought us into the heroine’s inner life. Lataji expressed her feelings through the lyrics and music, she created the emotions; we understood them and we made them our own. The Hindi film songs she sang give women the ability to express feelings of love, of desire, of hope that their dreams would come true, and of the sorrow when their hopes were crushed. They were universal and they were individual. Her distinctive voice was so great that it was always hers, whoever the actress it was picturised on, yet it was always ours, too. We heard Lataji, we saw the actress, we felt it in our hearts.

I’ve mentioned just three films and I can hardly bear to leave out Lata’s technical accomplishments which shine effortlessly in Vijay Anand’s Guide (1965), her romantic songs for Raj Kapoor and Yashji, but then her bhajans, her patriotic songs and her cheeky songs too—is there any spice missing from her ‘Kanta Laga’ (Samadhi, 1972)? Or the folk song, ‘Chadh Gayo Papi Bicchoo’ in Madhumati (1958)? And then there are the du­ets with Rafi, Hemant, Kishore, Manna. Which is my favourite Lataji song? The one that’s playing now.

While Lataji’s voice quality may have changed later in her life, as do all singers’ voices, the idea of her being ‘screechy’ or ‘mediocre’ is absurd. Her musicianship is as­tonishing (I wish she had composed more music); her voice is one of the world’s all-time great voices. Its perfection is something we can barely imagine: it sounds divine and its immortality is assured.