How B-schools have adapted to Covid 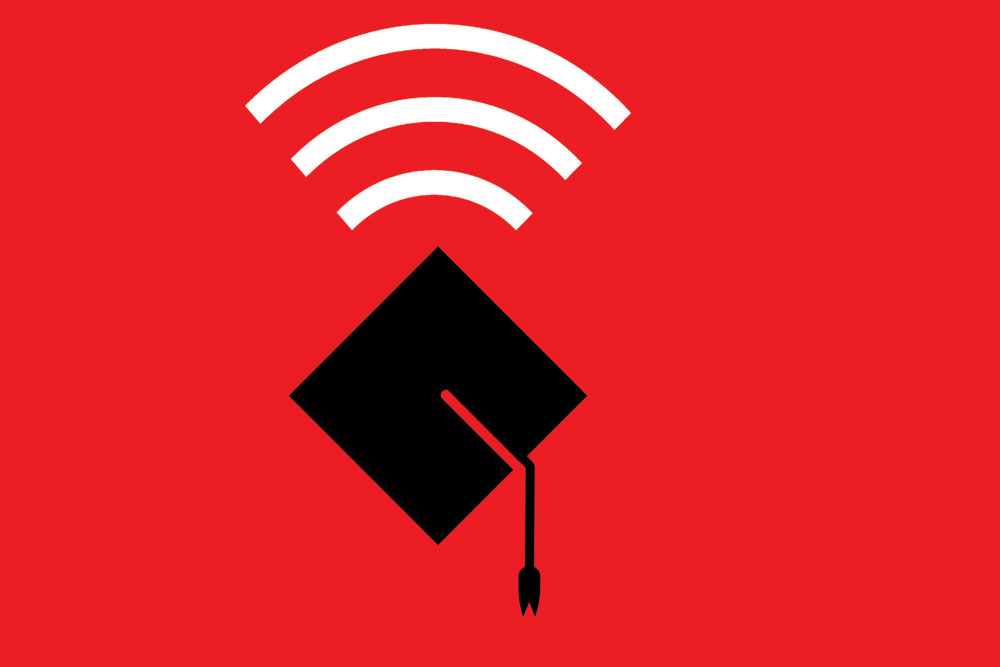 
IT WAS A BIG DAY for Prakash Roy, 31. A first-year student of the Post Graduate Programme (PGM) at the Indian Institute of Management, Lucknow, Roy’s summer internship was beginning. He adjusted his tie, checked his hair one last time in the mirror, took a deep breath and then sat down in front of his computer screen in his hostel room. It was April 2020 and the pandemic had just started unfolding across the world. First, Roy’s classes went online and then before he knew it, his entire life did. “It was a whole new world. A few friends and I had decided to stay back when the lockdown got announced, convinced it was a temporary measure. Soon, it felt we were deserted on an island. Everything was eerie, every day we charted new territory,” Roy tells Open on the phone. He graduated last year and even today, he works online from his hometown in Jorhat, Assam.

It was on March 11th, 2020, that the World Health Organization declared Covid-19 a pandemic and the world came to a skidding halt. Life, as people across the globe knew it, was upended in a matter of hours. A stunned world grappled to come to terms with the change; in many ways, it is still struggling. Overnight, the pivot from offline to online took centrestage, without many even realising it was taking place. Corporates, with state-of-the-art digital infrastructure at their disposal, were able to make the transition more easily compared to others, including professional post-graduate institutions like MBA schools.

“Management education is a professional degree, more oriented towards craft and skill-building than just theory. An MBA classroom is akin to a lab where you intern and understand the dynamics of an organisation. A big chunk of learning comes from case studies—narrative representations of an organisation—and this is done in workshop mode with students bouncing ideas off each other,” says Sanjay Chandwani, who is a visiting professor at IIM Rohtak, apart from other institutes. It has not been easy to recreate an MBA classroom online though institutes, especially the top 20 business schools in the country, have tried and succeeded to a great extent.

It was Harvard Business School (HBS) that showed the way. In March and April of 2020, HBS reportedly organised a series of free webinars to share their experience of teaching remotely, especially on Zoom. In India, faculty across B-schools agree that the first challenge was to recreate the inter-personal dynamics of a physical classroom online and to make the process more engaging. Kaushik Ranjan Bandyopadhyay, an associate professor of Business Sustainability at IIM Lucknow, for instance, started sharing case studies in advance. “There was a constant conversation about how to make the experience more interactive for students. At the end of every class, we took feedback to address limitations. Institutes like IIMs gave leeway to faculty to invest in whichever device it felt was needed to enhance the teaching experience,” he says. 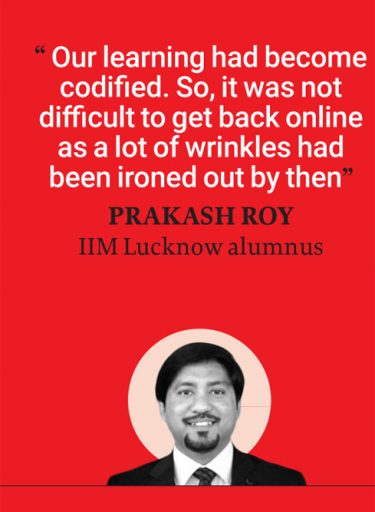 A big learning process for the schools was handling the online behaviour of students. Most of the top B-schools had an unofficial policy of insisting that the students keep the video on and the mic off during the class but given the fact that students come from across the country and connectivity is not reliable at the best of times, this could only be followed in principle rather than theory. “The students were active participants in the learning process in a physical class. They would take the discussion forward with their questions, observations and musings. But, with the advent of online classes, I see a great degree of passivity on the part of students facilitated by the option of turning off their videos. Instead, students now have to be nudged and even cold-called to share their thoughts and prodded to ask questions,” says Priya Nair Rajeev, associate professor, OB & HR, at the Indian Institute of Management, Kozhikode. Institutes also grappled with uploading lectures online for ease of access. Students interviewed admitted that quite a few professors were uncomfortable with their knowledge being shared publicly. Schools like Indian School of Business (ISB), Hyderabad, found a middle ground by making the lectures available on their internal learning management system. These could only be viewed and not downloaded.

Class participation for the naturally diffident can be tough. Online classes, especially for first-year students, where everyone from classmates to the professor is a stranger, make it tougher. “Assignments in MBA classrooms are hypothesis-based which are tested out by students when they are in the field. The groups that are formed are inter-gender, inter-linguistic and inter-backgrounds. The assignments require them to reach out to corporate honchos, visit markets, etcetera. It is a tremendous opportunity for students to learn from each other and about the profession,” says Chandwani. In B-schools, in fact, students earn credits in a rolling fashion. End-term papers sometimes carry only a 30 per cent weightage. The remaining comes from regular class assignments, quizzes, etcetera.

In October of 2020 when Covid cases started dropping, a few B-schools took the decision to bring students back on campus, purely on a student preference basis. The conditions laid down were the same across schools though—regular testing, video classes and bio bubbles. “Second-term onwards, we were called to the campus in batches. Quite a few of our classmates came from remote towns and cities with limited internet access. They were given priority. We were quarantined for a week and tested before being allowed to step out on campus,” says Bhavika Bhargava, 29, who graduated from ISB in 2021. Students had to comply with a whole host of rules and regulations, including no gatherings of more than five people. “But even with all the restrictions, it was being on campus that made me realise I was doing my MBA. Even though we had a whole host of groups on different social media apps, people were doing Zoom calls in a bid to get to know each other, but it is different in person,” she says. Classes during this entire time—Bhargava’s batch was on campus during the Delta wave—were both online and offline. Wearing mask was always mandatory.

The most important aspect of an MBA course is the degree. But campus life, especially if you are in one of the top B-schools in the country, is an integral part of that degree. An intense programme, it throws students together for hours in group studies. Other perks of campus life—jam sessions, parties, sport and festivals—make up a huge part of the experience that is a B-school. “An IIM campus like ours offers so many additional opportunities for peer learning, individual exploration and building critical communication, analytical and interactive competencies. Unfortunately, the last two batches of students have completely lost out on those means of experimenting with themselves, pushing boundaries, and growing,” says Priya Nair Rajeev.

Students like Prakash Roy experienced both sides of the coin in terms of inter-personal relationships. Welcoming a new batch is a whole exercise at the IIMs. Roy and his batchmates brainstormed to come up with new ways to engage, build trust, promote interactions with the new batch but the difference, he says, was stark. “Compared to our first-year and the next batch’s induction, we could see just how different our experience had been.” But there was also a positive development to all of this. The students at IIM-Lucknow were called back to campus in October 2020. By the time the second wave hit, the transition to web learning was seamless. “Our learning had become codified. So, it was not difficult to get back online as a lot of wrinkles had been ironed out by then.” 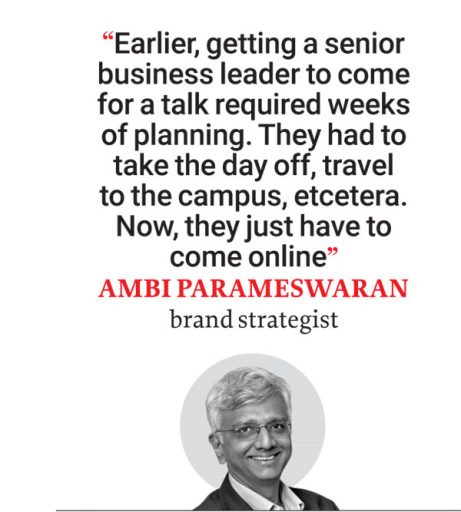 But it is not entirely a sob story. According to brand strategist Ambi Parameswaran, even if campuses go back to functioning the way they used to, in a year or so, there will still be gains. “Earlier, getting a senior business leader to come for a talk required weeks of planning. They had to take the day off, travel to the campus, etcetera. Now, they just have to come online. The opening up of this option has meant that it is easier to get international experts to give a talk to your class. Several B-schools offer long-distance programmes which required students to come to a centre. But now, desktop-to-desktop learning will become the norm. We are also looking at flipped classrooms where I can record a lecture, send it across to the students and ask them to discuss it in class after watching it. This way, we save time and skip straight to the analysis part.”

Whatever criticism has been levied against B-schools during the pandemic has been with regards to the fees they have continued to charge from the students despite classes being online. A few schools did waive off hostel fees, but by and large there has been no reduction in the fees charged, at least by the top schools. “Our students did not raise the issue of money, but schools did have to invest in enhancing their backend technology,” says Pradeep Pendse, in-charge director of University Programmes and chief technology officer of WeSchool, Welingkar. “Zoom, etcetera, is okay but interactive technology had to be invested in, cloud labs to be subscribed to. Research database enhanced,” he adds. Some IIMs, reportedly, gave the students a break-up of how the money was spent to upgrade technology for online classes. “We invested in the exam software Mercer-Mettl as it ticked a lot of boxes. It does not require much bandwidth; the authentication process is simple enough. But most importantly, it gives the student the option to start again from where they left in case of a power cut. Even professors had the power to send a fresh exam to a student from where they had left off, in case one ended it accidentally,” says Kaushik. All of this is money considered well spent, according to Pendse, who feels the hybrid model is here to stay. “With the UGC saying that 40 per cent of a course can be taught online, flipped classrooms could be the way, going forward.”

If there will be a fallout of the pandemic, it will be felt by the second and third-rung B-schools. Quite like engineering, there has been a flourishing of MBA institutes that charge a lot of money, but the degree may not guarantee the same kind of placement as before. For the top B-schools, both the years of the pandemic have not seen a drop in placements. In fact, placements “have been fabulous,” says an industry source. But trouble is brewing for the lesser-known institutes. “A degree at a second-rung institute can cost between `10-15 lakh. If placement isn’t great, they will have to think of solutions,” says Parameswaran.

Every time a return to the old way of life seems possible, a new wave arrives on the horizon. Students like Bhavika and Prakash have graduated and moved onto their corporate careers, but they still don’t know how many batches will experience the same curtailed environment as them. In a few B-schools, class participation is mandatory, and a portion of the grade depends on it. After graduation, Bhavika was chatting with a senior from ISB who dug out a photo. It was a shot of his classroom with every student’s hand raised to answer the professor’s query. “I know how that works in theory but despite being on campus, I never experienced that. So, in many ways, the MBA experience of our batch will remain incomplete.”