The Big Message from a Small State 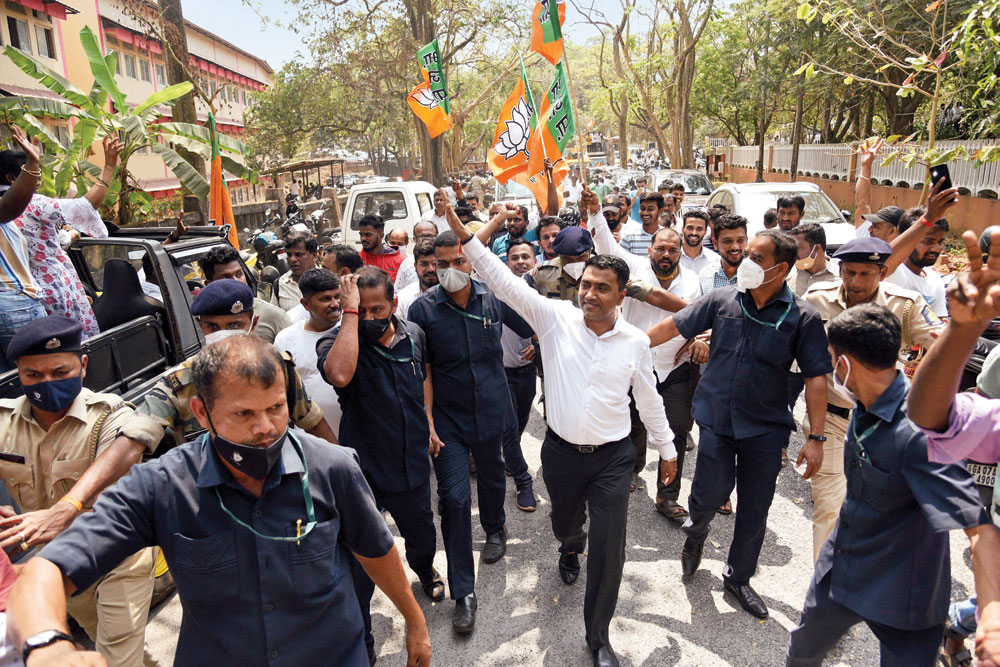 
As counting gained pace and numbers began to stack up for the Bharatiya Janata Party (BJP), the party turned the page on the legacy of Manohar Parrikar, both embellishing it and recasting it with a new leader in Chief Minister Pramod Sawant, set to renew his stint in the office he took over from the late saffron stalwart in March 2019. Inching towards a majority, BJP will not have to sweat it out to cobble up the numbers, with smaller parties and independents notching up a few seats.

The big difference of seats between BJP and Congress in a House of 40 is what knocked the challenger out of contention. Congress-Goa Forward Party looked likely to win 12 seats, considerably behind BJP, and way short of the halfway mark. The other alliance of Trinamool Congress and Maharashtrawadi Gomantak Party (MGP) looked set to win a couple of seats, all for MGP. Put together, Congress, MGP, the Aam Aadmi Party (AAP), and the Goa Forward Party (GFP) still ended up behind BJP without enough seats to form a government. With the focus on post-poll deals and alliances, BJP was not likely to allow a small deficit to prevent it from forming the government again in the state. The Nationalist Congress Party-Shiv Sena alliance drew a blank as three independents and a lone member of the Revolutionary Goans Party, expected to win their seats, presented a few more post-poll options.

The vote shares told the story of the Goa election, with BJP logging in 33 per cent to Congress’ 23 per cent, with “others” bringing up the third largest chunk of 19 per cent votes. BJP fought on 40 seats and Congress on 37, having left three for GFP. Both Congress and its ally underperformed. NCP and Sena contested 13 and eight seats, respectively, and to their consternation, did not bother the scorer. In 2017, BJP with a near similar vote share had won just 13 seats while Congress with 28 per cent of the vote, got 17 seats, only to lose the trophy to some adroit post-poll footwork by BJP leader Nitin Gadkari who stitched a coalition while a leaden-footed Congress lost the plot. The decline in Congress votes and the role of smaller parties have given BJP the winning advantage this time round with the saffron outfit fielding a shrewd mix of Hindu and Catholic candidates. It was a formula worked out by Parrikar who led BJP and allies to a rare majority in the 2012 Assembly election. Thereafter, the formulation yielded mixed results but BJP’s decision to induct several Catholic MLAs from Congress during its just-concluded term, though intended essentially to demoralise the rival, also revived the idea. Important Catholic leaders like Atanasio Monserrate and Mauvin Godinho have won on BJP tickets from Panaji and Dabolim.

The small state, known for its alluring beaches and tourism avenues, presents a larger picture in terms of the political message of the election. For one, BJP under Sawant is headed for a stable five-year term as the numbers do not permit any mobilisation of opposition MLAs unless the BJP legislative party itself cracks, and that is unlikely. Rather, with the support of independents and some smaller parties, BJP will be well placed. And, the ‘loyalty’ pledges that Congress got its candidates to swear may not prove as durable as the party might hope for. Importantly, all this will mean that the power of parties like MGP and GPF is much reduced, insulating the government from being buffeted by demanding allies. The scenario of the tail wagging the dog has been all too common in Goa politics, and sectional support that MGP enjoys among the Marathi-speaking population had allowed it to punch way above its weight in the past. BJP’s decision to force the exit of MGP and GFP from its government, more than making up the shortfall with Congress defectors, turned a new leaf in the state’s politics, and the regional outfits appear set to play a marginal role in the days ahead. This is one big takeaway.

BJP’s decision not to give Parrikar’s son Utpal the Panaji ticket was not easy, given the late leader’s standing in the party. But Utpal turned down alternative seats and BJP did not want to displace Monserrate from the seat where he was a strong contender while also keeping in mind the need to balance Hindu and Catholic candidates. Though BJP’s election in-charge, former Maharashtra Chief Minister Devendra Fadnavis, insisted that the Parrikars are part of the BJP family, he did not budge on Panaji. Parrikar junior ended up second to Monserrate on a seat that his father had represented so successfully. The message driven home was one of party loyalty and discipline and helped BJP managers focus on the contest rather than being distracted by emotional issues such as the claims of kith and kin. Sawant, an ayurvedic doctor who inherited a difficult mantle, is now the established face of BJP having led the party to a significant win. His recent meeting with Prime Minister Narendra Modi, besides being a stocktaking exercise, was indicative of recognition by the top brass that he is the future of the party. In a state known for fractious politics, Sawant has been able to avoid major controversies despite the state having suffered in the second wave of Covid. He is seen as a sincere and diligent administrator and the decision to drop a minister accused in a sex scandal without delay helped BJP limit damage from a serious controversy. Similarly, exits of some sitting MLAs do not seem to have hurt the party and its promise of development endured.

The other big lesson is the failure of AAP and Trinamool to make an impact, putting paid to their efforts to expand their presence in the state. While AAP has much to cheer about its win in Punjab, Trinamool leader and West Bengal Chief Minister Mamata Banerjee faces a sobering setback with the party drawing a blank, the high-profile presence of its MP Mahua Moitra as poll manager notwithstanding. Both AAP and Trinamool failed to internalise the nuances of Goa politics and lacked an organic flavour. Trinamool’s claims of replicating its Bengal model only helped BJP argue that this would mean ‘appeasement’ of minorities and serve to divide Goans, a charge that gained currency with the exit of a clutch of leaders within months of joining the party. They said Trinamool had not understood Goa and was trying to play communal politics. The dissonance caused by the noisy entry of AAP and Trinamool and 7 per cent and 5 per cent votes they polled may have dented Congress prospects a bit, but hardly made an impact on the overall results. It is speculative to assume that in their absence, this vote would have entirely gone to either BJP or Congress, given that the ballots polled were more related to the influential individuals who contested on Trinamool and AAP tickets. All this added up to the need for parties to set up an organisational base and work on grooming credible local leaders as state elections are intensely local. Last-minute campaigns do not produce results and AAP met a similar fate in Uttarakhand.