Well within the grasp of Modi 2.0 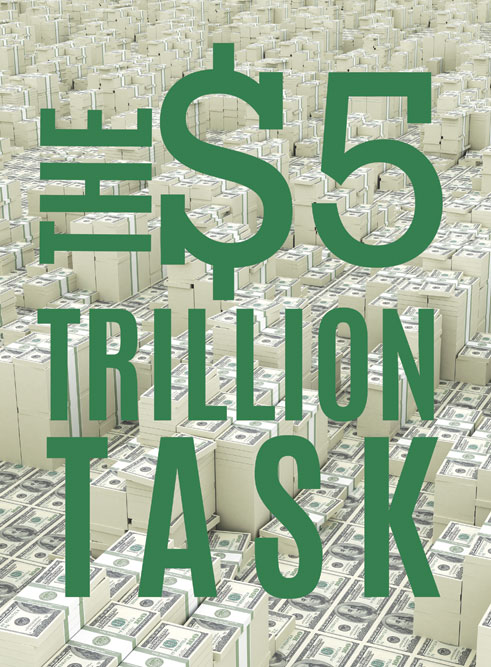 PRIME MINISTER NARENDRA MODI LIKES SETTING targets and achieving them. It is too early to say what precisely will be the political ambition for 2024. But after ‘272 plus’ and ‘300 paar, 2/3rd in 2024’ would seem the only reasonable goal. For the economy, the target has been clearly defined in Finance Minister Nirmala Sitharaman’s first Budget: a $5-trillion economy by 2024. It requires India to grow by at least 8 per cent every year. It is achievable. But below the headline numbers, the complexity of the task is apparent. India must simultaneously solve problems of 19th and 20th century vintage while grasping the opportunities of the 21st century, all in a short period of five years.

Consider perhaps the three most salient vision points of the Budget. First, the Government is committed to providing piped drinking water to every household by 2024. Most advanced countries provided this for their citizens by the end of the 19th century. India ought to have done it soon after Independence but somehow contrived to let it linger well into the 21st century (along with the associated roti, kapda, makaan, that is, basic necessities).

Second, the Government reiterated its resolve to implement a strategic disinvestment programme which will finally see the Government exit the business of doing most businesses. The utter failure of state-ownership of businesses was apparent by the 1970s. By the 1990s India ought to have been convinced but, with the exception of a brief period of common sense under the Vajpayee Government, India has let this (and associated overhand of the state in too many unnecessary spheres) linger into the 21st century as well.

Third, the Government spelt out a vision for electric vehicles and other sunrise industries of the fourth industrial revolution, including batteries, battery storage, photovoltaic cells and 3D printing, where global leadership is still up for grabs. It is the first industrial revolution in four decades and, for policymakers, it is not a bus they can miss.

In order to achieve all of this, at a philosophical/theoretical level the Government needs to accept the following tenets: a) that state capacity needs considerable enhancement, b) that enhancement of state capacity doesn’t mean an enhanced role for the state; the state must diminish, c) ever greater amounts of foreign capital are necessary to finance India’s growth, and d) the Government needs to start trusting the private sector and designate it, for real, as a partner for prosperity. Where does the Modi Government stand on these?

On enhancing state capacity, the Government has made several strides. It has not hesitated to use the available tools of technology to cut leakages and ensure better delivery of public goods and services to the poor. The early adoption of Aadhaar, the rollout of the Jan Dhan Yojana and leveraging the deep penetration of mobile phones and cheap data has meant that for the first time in several decades, possibly for the first time since Independence, government spending on the poor is getting bang for the buck while eliminating unscrupulous middlemen and sidelining corrupt officials. This is fostering inclusion which will help every Indian to participate in, and benefit from, the quest for higher growth. The new efficiency is not confined to delivery systems alone. The Government is also using technology to monitor outcomes in real time with the Prime Minister personally taking a lead in addressing any bottlenecks through his online interaction with secretaries to the Government and chief secretaries of 29 states.

The new efficiency of the Union Government is being passed down to states by inducing a spirit of competitive federalism so that states engage in a race to the top. States are now ranked by the Union Government on their performance across parameters like ease of doing business, education and health outcomes and how far they are from meeting sustainable development goals. The laggards are being shamed into improvement.

A second phase of enhancing state capacity will begin in Modi 2.0 as greater outside expertise is brought into the Government in the form of lateral entries at all levels of bureaucracy. It is also likely that greater manpower will be assigned to the judiciary whose slow functioning has created much economic uncertainty. In the final analysis, total overhaul of the Government requires changes in process and personnel. Both are happening and will hasten the journey to $5 trillion.


$10 trillion will have to be covered in even quicker time. It can only happen if there is inclusion and a flourishing of enterprise fostered by a reformed and limited government

Despite the impressive reinvention of Government, it is a fact that the Government can play only a supporting role in an 8-per-cent-growth economy. The private sector must lead. For this to happen, the Government must immediately withdraw from performing activities that are best left to private enterprise. To its credit, Modi 1.0 restarted the privatisation of public sector undertakings (PSUs) which had been halted for over a decade under the United Progressive Alliance (UPA). Unfortunately, the intent did not translate into tangible outcomes, barring the sale of a handful of PSUs to other PSUs which may technically meet the criteria of strategic disinvestment but not of privatisation. The fact that the first Budget of Modi 2.0 has put this on top of the agenda—the sale of Air India has subsequently been given an October deadline—is a welcome sign of the Government recognising its own limitations in running businesses. Disinvestment is not about non-tax revenues for the Government. It is about bringing the kind of efficiency to the economy that will enable an 8 per cent per annum growth for five years and more. Along with a continued thrust on ease of doing businesses, the Government will have to take several steps to rid India of the pre-1991 overhang of state overreach.

On labour, a contentious reform subject, the Government may strike a grand bargain by offering a revised national minimum wage in exchange for greater flexibility in laws. Interestingly, the Budget mentioned the rationalisation of labour laws without kicking up a political storm. Maybe, the Government (and the country) is finally ready for the next generation of reforms.

Perhaps the area where the first Budget of Modi 2.0 took the boldest steps to attain the $5-trillion-economy objective was in the domain of foreign capital. First, it took steps to make investment easier for foreign portfolio investors. Second, it promised to look at relaxing the remaining caps on foreign direct investment (FDI) in different sectors, including aviation and media. Modi 1.0 had already liberalised FDI across many sectors, including defence. And India is less averse to FDI now than at any point in its post-Independence history. Third, it stated the intention of the Government to meet some of its borrowing requirements overseas.

The third is the boldest move of all because it had been a consensus not to raise Government debt from overseas sources, even post-liberalisation. The consequence is that the Government does not have much foreign debt. But viewed differently, the Government is missing out on raising finance from an extremely low-interest rate environment that is currently the globally norm. By financing all of its deficits locally, the Government is putting upward pressure on interest rates for domestic borrowers and crowding out the private sector from the pool of available domestic resources. By borrowing some of its requirements from overseas, the Government can set free domestic resources for cheaper borrowing by the domestic private sector. Needless to say, any plan to borrow overseas will have to be carefully thought out and will have to consider the currency risk involved. However, the Government has signalled a willingness to think out of the box. It needs to. Domestic savings have been declining. The financial system, particularly banking, is still nowhere near the pink of health. A $5-trillion economy is not feasible without adequate, cheap financing. Foreign capital is looking for investment avenues in a handful of economies that are still growing rapidly, like India.

The last tenet, of trust between the government and private sector, is at best a work in progress. The decision in the Budget to impose an additional surcharge on those earning above Rs 2 crore a year and an even higher surcharge for those earning over Rs 5 crore a year is evidence of the still testy relationship between wealth creation and the redistributionist instincts of the Indian state. In the medium term, such taxation will only mean that a larger number of Indian businesspersons will choose residency in tax-friendly jurisdictions or find a way to evade taxes while in India.

Modi 1.0 had inherited a difficult political economy in the context of government-private sector relations. The UPA era had seen crony capitalism escalate to an unimaginable peak, a level which threatened the legitimacy of the entire post-1991 market economy era. To its credit, Modi 1.0 took several steps to clean up the system which included demonetisation, the Goods and Services Tax, the Indian Bankruptcy Code (IBC), the Benami Properties Act and renegotiating tax information exchange agreements with many countries. In particular, the IBC was a landmark because it is the first time that a promoter could actually lose control of their business if it is mismanaged. Of course, the hangover from cronyism hasn’t gone away. The sorry state of the banking system, still laden with non-performing assets, is a reminder of the excesses that were committed when a set of capitalists colluded with those in power. Modi 2.0 has to walk a tight rope, of giving legitimate capitalists the room to prosper while clamping down on those seeking to cut corners. The additional tax burden on high earners does not readily suggest an embrace of the former.

Of course, the Finance Minister did say that India Inc was the nation’s job creator and wealth creator. And she did raise the threshold of the lower-top corporate tax rate of 25 per cent to firms with a turnover up to Rs 400 crore. The Government is comfortable with start-ups and smaller entrepreneurs, but less comfortable with big business. For India’s economic ambition, large firms are absolutely necessary—they are the ones that generate formal jobs, they are the ones that innovate, they are the ones that conquer global markets with quality products and services. Hopefully, as the cleanup of the Indian economy reaches its logical end, the relationship between government and larger businesses will become constructive and transparent.

The goal of a $5-trillion economy is just one milestone. The journey to $10 trillion will have to be covered in even quicker time. It can only happen if there is inclusion and a flourishing of enterprise fostered by a reformed and limited government. India must achieve in five to 10 years what other nations did in 20. That is the people’s mandate and the task before Modi 2.0.