Ramayana 2019: The Restoration of a God 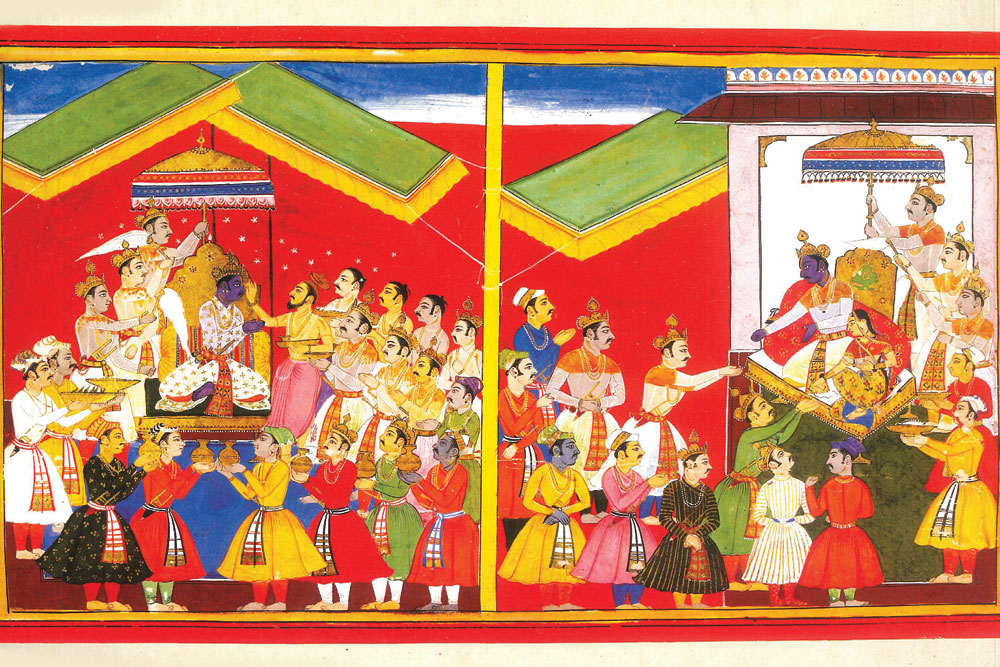 Ram is anointed king in Ayodhya in the presence of priests, courtiers and his brothers. Sita, anointed queen, sits next to him (Courtesy: Ramayana, introduction by JP Losty and text by Sumedha V Ojha, Roli Books, 2016)


‘As long as the mountains and rivers shall endure upon the earth, so long will the story of the Ramayana be told among men.’ This verse from India’s First Poem is chosen as the epigraph in the epic’s most majestic translation, the Princeton edition in seven volumes under the general editorship of Robert P Goldman. The story is a tragedy, as all great epics are, even though some Western scholars argue that it lacks the psychological depth of their classics, which is debatable. What it has in abundance is narrative ingenuity, the kind of storytelling that shifts from social realism to magical realism, from eco fable to feminist drama, without a pause. The plot twists include palace intrigue, forced exile, notional coronation, aerial combat, and divine intervention in the moments of surrender and sacrifice. And ages before the author became a character in Don Quixote, Valmiki, the adi kavi, the First Poet, did it with greater aplomb in the Ramayana. It is the story of a god who has been preordained to play man, a man who has not been told that he is a god till the very last moment, a man who, as prince, son, husband, brother, father, warrior, leader, is challenged at every step to be the most perfect, the idealised ideal, the highest moral being, the slayer of sentiments that imprison the less-than-perfect action heroes. Even gods would wait in wonder till they got a chance to measure the depth of his conscience.

Valmiki’s Ram became India’s most intimate invocation. A god who migrated from the book—Hinduism can do without the intimidating Capital B—to civilisational memory. A god who became a national grief, a struggle, a touchstone, a dispute. The manner in which Ram became an argument between faith and ideology was something only Hinduism could endure, even as politics provided dramatic tension. Christendom as a civilisational entity began with a book, and no dispute there, no homeless gods there, any longer, in spite of the distraction of a losing jihad. As historians like Tom Holland have argued, the Western mind is shaped by the story of Christ. The Hindu mind is not moulded by one book, or one god, but by a multitude of texts, by never-ending stories. Its elasticity is its creativity. Its infinite morality is the Hindu identity.

On December 6th, 27 years ago in Ayodhya, when the angry, aggrieved Hindu rewrote the story, it shamed India. It changed India, too. We have not yet fully grasped the enormity of the change. Then, it was the crudest way of demolishing a false argument. For, beneath the wreckage of the mosque lay the sorrows of a civilisation. When Ayodhya was reclaimed by force, the vengeful Hindu only wanted the home that rightfully belonged to his displaced god. In Ayodhya that day, the old battlefield of Islamic invaders became the karmabhoomi of political Hindus. The struggle for Ayodhya, with LK Advani on a Toyota chariot being its abiding mascot, was not a struggle for power. It was a struggle for justice. It was the rejoinder of religion to the profanities of the past. Ram became a god caught between mythology and history, faith and cynicism. He did not regain home. Not yet.

Post-demolition, parallel to the legal dispute over Ayodhya ran the pretences of Actually Existing Secularism (as opposed to the ideal), which was aided by historians still haunted by the Marxian spectre. Even while debating the historicity of the epic, the editor of the Princeton edition conceded: ‘If we make some allowance for epic hyperbole in the elaborate description of the city of Ayodhya and in the accounts of the wealth of the various kings that people the text, we have no difficulty in reading the setting of first part of the poem as a credible, if idealised, rendering of a fortified township in the heavily forested plains of the Ganges-Sarayu watershed.’ The haunted historian, patronised by the Nehruvian power structure that had the longest run in our politics, did not just dismiss the attitudes and aspirations of the believers as corrosive superstition. He even refused to acknowledge archaeological evidence. The struggle over Ayodhya pitted the cultural intimacies of the Hindu against the borrowed isms of what was casually portrayed as modern India, as if modernity is independent of civilisational memory. As if ideological certainties are entitled to have complete copyright over our cultural past.

Even though there is a sense of Hindu triumphalism in the air, it is a tragedy of our times that, in the end, it took the highest court of India to bring peace between India’s present and its cultural past. For so long, Indians were told by the secular state to behave. Translation: Religion is a cultural corruption, unless it’s the religion of the victim who keeps your secular conscience—and the vote bank that is minority ghettos—alive. For so long, India was told to freeze its cultural memory, to admit that India without the prince of Ayodhya would be a better republic. The de-Hinduisation of India’s civilisational identity is still a vocation for haunted historians, even as comparatively young civilisations acknowledge their indebtedness to the dominant religion. The Supreme Court verdict in favour of a displaced god is bigger than the temple that will be built on the 2.77 acres by the Sarayu. It travels back in time to restore the Hindu adjective to a living civilisation.

Temples are the sacred spaces of peace and submission, of prayers and conversations. As Ayodhya brings an end to one argument, let it now become the site of reconciliation, and where modern India won’t forget the moral universe of the adi kavya.