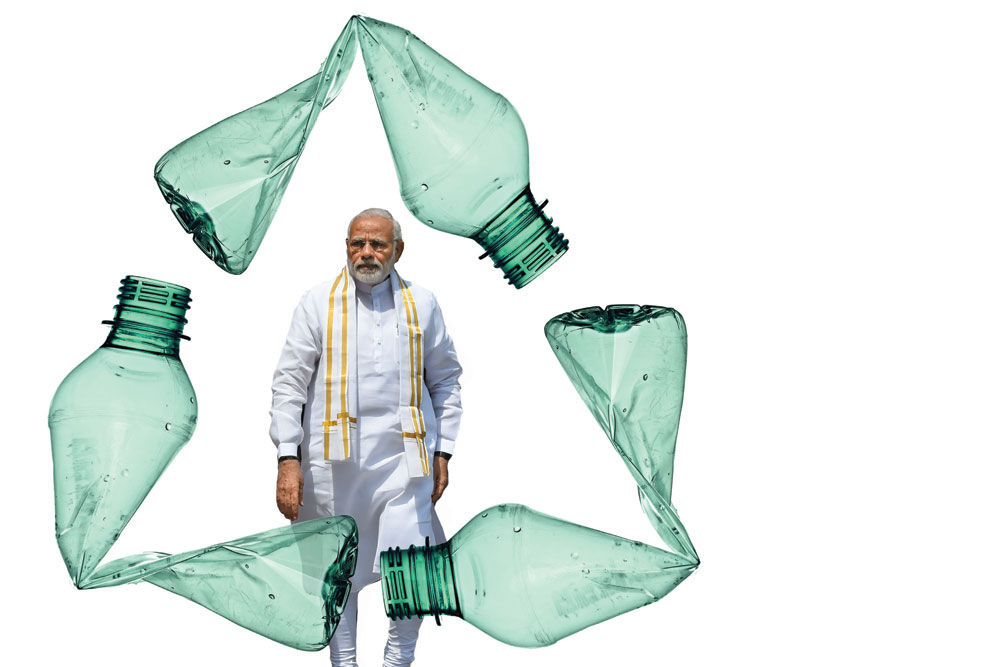 
Through the decades, the ramparts of the Red Fort in Delhi have borne witness to many an important speech by the leaders of independent India. Prime Ministers have showcased the achievements of their governments from this pulpit. Since the 1990s, Pakistan and reasserting India’s political rights over Kashmir have featured prominently in the Independence Day address of prime ministers. It was during PV Narasimha Rao’s time that economic issues came to the fore. Atal Bihari Vajpayee, in his Independence Day speech after the Pokhran nuclear tests of 1998, used the Lal Qila to send a warning to Pakistan. Most of these speeches, going by the political tradition set by Jawaharlal Nehru, were too lofty to touch upon matters of daily life.

For so long, political leaders restricted themselves to preserving power, with varying degrees of success and failure, leaving the task of social and behavioural change to the reformers and non-state actors. Narendra Modi defies the mould.

With his first address from the Red Fort in August 2014, Modi made it clear that democratising the prime minister’s address was a core concern of his and that a change in traditional individual and social behavioural patterns and mindsets formed a central pillar of progress and national character-building.

Modi’s Independence Day speeches have addressed subjects as wide-ranging as cleanliness, sanitation, drainage and toilets; discrimination against the girl child, the imperative to educate her; the need to prioritise physical fitness, by means such as yoga, as a key component of mental and holistic social health; and so on. “I have often been asked why a Prime Minister should address issues as commonplace as sanitation, use of toilets, and so on. These are crucial to the overall health of every society and I do not see them as lowly issues. Nor do I see myself as the Pradhan Mantri, but as your Pradhan Sevak,” Modi has asserted. Studies have maintained that his Independence Day references to poverty—and the need to expunge the social stigma attached to it—have been twice as many as those of his predecessors.

Modi’s social messaging has, however, refused to be restricted to the Lal Qila pulpit. It has often used popular tools, such as social media and his Mann ki Baat radio address, to focus on everyday issues. He has wielded the broom himself to popularise the Swachh Bharat Abhiyan. Mann ki Baat, in fact, has allowed him to address fresh social issues in simple terms. His Kashi Vishwanath corridor project is an extension of his belief that cleanliness is next to godliness, echoing Mahatma Gandhi and linking it to the concept of Swadeshi.

Central to the sustained emphasis on transforming obsolete and unhealthy social norms and engendering necessary behavioural changes that make a progressive nation, is Modi’s belief that economics is not the only factor in refining national character and that social and personal dignity are just as crucial. It is with this in mind that his Government prioritised socially relevant welfare programmes, such as the Pradhan Mantri Ujjwala Yojana to supply free cooking gas cylinder connections to BPL families. The universal sanitation programme, Swachh Bharat, with a target of 111 million toilets to be built in five years by October 2, 2019—Gandhiji’s 150th birth anniversary—is yet another commitment to national hygiene, health and dignity of the poor, especially rural women. More than an estimated 100 million toilets have been built till date according to the data. Part of the same overarching issue of public health that featured in Modi’s Independence Day Speech earlier was the Pradhan Mantri Jan Arogya Yojana or ‘Modicare’.

It was not until 1976 that the government, for the first time, announced the National Population Policy to directly tackle an alarmingly burgeoning population problem. It was the first official acknowledgement that a rapidly increasing population posed a threat to national resources that would lead to widespread poverty, unemployment and social unrest. On August 15th this year, when Modi sounded the warning bell from the Red Fort on uncontrolled population growth and the threat it posed to economic and social stability, he didn’t resort to ‘political correctness’.

There are some reports that at one Planning Commission meeting in 1949, Nehru had emphasised a concerted national family planning programme. The first decade of the Plan period, 1951-1961, saw family planning adopted as a national policy. The National Family Planning Programme was launched on an experimental basis in 1952 to get the birth rate down and ‘stabilise the population at a level consistent with the requirement of the national economy.’ The programme centred on those who chose to visit government clinics to opt for birth control.

There were indications that Nehru may not have been very serious about the issue, preferring to view it instead as demographic dividend, thereby initiating a political tradition of tip-toeing around this socially sensitive but potential threat to economic stability. In an interview with TN Ninan in 1986, JRD Tata had indicated as much, maintaining that despite being friendly with Nehru, he had disagreed with the economic trajectory that Nehru had set India on. Among his biggest frustrations, he listed ‘even things that were not business’. He maintained: ‘I was the first in India 35 years ago to sound the alarm on the population. I made a speech. I was wrapped on the knuckles, who do you think by? Nehru. His words will always ring in my ears: ‘Nonsense, J. A large population is the greatest source of strength of any nation.’ And after that, we’ve added 350 million people…’

Birth control remained a politically risky and socially controversial issue despite proactive efforts to encourage it nationally in the Fourth Plan. By 1971, India’s population had ballooned by 24.6 per cent. To control this, the Fifth Plan set a goal of 33 per cent couple protection by 1978-1979 compared to only 16-17 per cent at the end of the Fourth Plan. Monetary incentives were given to couples opting for sterilisation.

It was not until Emergency was declared in 1975 and civil rights were suspended that the highly controversial forced sterilisations began under the supervision of then Prime Minister Indira Gandhi’s son Sanjay Gandhi. Some 6.2 million men from poorer homes were reportedly forcibly sterilised. Sanjay Gandhi may have correctly identified the serious problem that lack of birth control was posing to India and its economy, but the aggressive methods chosen to achieve set sterilisation targets backfired in the subsequent years, making politicians all the more wary of proactive programmes for population control. ‘Nasbandi’ had become a dangerous word and a potent electoral weapon.

DESPITE A LOT of money spent on awareness campaigns to popularise the ubiquitous ‘Red Triangle’ and the small family, the hiking of marriage age for girls to 18 years and boys to 21, as well as the focus on raising girls’ education levels countrywide, the annual population growth rate still averages around 1.3 per cent (for 2011-2016, as per The Economic Survey, 2018-19). Today, with a population of 1.3 billion, the danger this poses to India’s economic stability and environmental resources seems bigger than ever.

Environmental degradation and society’s largescale apathy towards this serious problem has so far ensured that single-use plastic, when discarded, clogs drains and sewers, pollutes sources of fresh water and the planet, especially given that it takes a long time to disintegrate. In water bodies, plastic has caused serious problems, including the death of fish. Nearly 50 per cent of single-use plastic ends up in the ocean, destroying marine life and entering the human food chain, as experts say. On land, among the worst affected by plastic bags are abandoned cattle and other bovines. India has set a target of a phased weeding out of single-use plastic by 2022, on Modi’s initiative, who announced in this year’s Independence Day speech that the ban would begin by October. This is considered the most comprehensive ban on single-use plastic, aimed at ending its production and sale. Some states, including Sikkim, Himachal Pradesh, Telangana, Maharashtra and Tamil Nadu have already announced a ban on single-use plastic and have begun implementing it too. Others like Uttar Pradesh have yet to implement this with a stringent penalty attached. India currently consumes 14 million tonnes of plastic. A ban on the first six items of single-use plastic—straws, plastic cups, plates, forks and knives, small bottles and certain types of sachets—is expected to reduce consumption by 5 per cent to 10 per cent. Heavy rains in several parts of India, due mainly to climate change, has meant that metros and some smaller towns stare at major annual floods—and massive economic loss—during the monsoon season, especially with plastic choking all drains, sewer pipes as well as fresh water sources like lakes and rivers. A huge environmental and health disaster threatens India unless urgent measures are put in place.

Previous governments may have demonstrated a commitment to social welfare but they failed to address key social and behavioural issues that are essential to dignity and building national character. There was more than an element of patronising associated with their welfare programmes. Modi has changed the lexicon of conversation between the Government and the people, making every poor and marginalised citizen a stake holder in the country’s progress. When he calls himself Pradhan Sevak and Chowkidar, he becomes one with the people he addresses.

On his 69th birthday on September 17, Modi preferred to have biker Raj Luxmi lead a big group across the country, spreading his message of Swachh Bharat as the foundation of Swasth Bharat. By campaigning for social transformation, he is only fulfilling the demands of his mandate. The path is not going to be easy and it involves risking his popularity. Such fears are for the fainthearted.