Lekshmy Rajeev, the author of Attukal Amma: The Goddess of Millions, in conversation with Executive Editor Ullekh NP 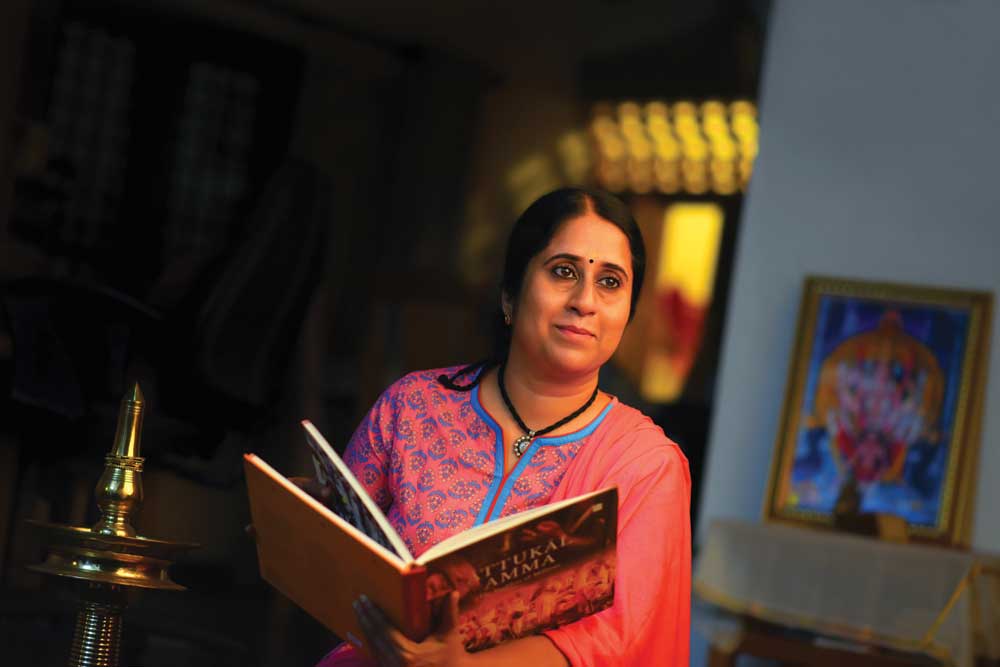 LEKSHMY RAJEEV (RIGHT) IS the author of Attukal Amma: The Goddess of Millions. A writer, poet and translator, she is currently working on two new collaborative books on temples—the Sabarimala Ayyappa temple and the Tirupati Venkateshwara temple. Her research covers the Brahminisation of local religious practices and appropriation of lower-caste places of worship, especially in Kerala. Executive Editor Ullekh NP speaks to her about the ongoing protests in the southern Indian state over allowing women to enter the Sabarimala temple following a Supreme Court verdict. She herself has visited the temple twice in the past.

How justified do you think is the argument that the deity in Sabarimala has special rights, by the exercise of which women in the age group of 10-50 years ought to be dis- allowed from entering the temple?

There is no justification [for it]. There is evidence that women of all age groups were allowed at the Sabarimala temple in the past. Women aged 10-50 used to visit the temple at the beginning of each Malayalam month, except in the crowded Mandala Puja and Makaravilakku seasons. It is after a High Court verdict in 1991 that the ban on a specific age group of women was highlighted and imposed overtly. But the High Court order itself had noted that there was no such strict restriction in the past. Even after 1991, women of all ages had visited the temple with the silent backing of priests. So the idea of the deity having any special rights to avoid even the sight of women in the menstruating age [group] does not arise.

What do you think of assertions about Ayyappa’s ‘naishtika brahmachari’ (eternal celibate) status?

That Ayyappa is a naishtika brahmachari is a contrived notion spread by the priesthood with no basis in the traditions and history of the temple. The Seeveli idol (which is shown during the customary procession) of the Sabarimala deity continues to be worshipped in the form of a warrior holding a bow and arrow. This is at variance with the idea of a celibate yogi who sits in meditation, always shunning anything related to rajo guna (innate quality that drives motion, energy and action). Also, panakam is still offered to the deity, which is a drink usually made only for a fierce god, an ugra moorthi, and not for a brahmachari. Also, if Ayyappa is a brahmachari, a shrine for Malikappurathamma, who is a woman in the menstruating age, shouldn’t find space in the temple complex. Even now, in the procession that goes to the Malikappurathamma shrine, the deity is worshipped in the form of Shastha, accompanied by his wife! According to one legend, when Ayyappa killed the demon Mahishi, Malikappurathamma got moksha and appeared in the form of her previous birth, as a young woman, whose marriage proposal Ayyappa rejected. She is waiting for him in the shrine, hoping for the day when no new male devotee visits Sabarimala, and he would marry her!

There are 100-odd other Ayyappa temples in Kerala where women of all ages are allowed. The very claim that the celibacy of an all-powerful god will be ‘polluted’ by the mere presence of women of menstrual age is an insult to both the deity and womanhood.

You have often talked about the Brahminical appropriation of non-Brahmin centres of worship in the south. How prevalent was this over the past few centuries in Kerala? Which are the other famous temples that were ‘snatched’ away in similar fashion?

Appropriation of local shrines by Brahmins has been relentless. In my book, Attukal Amma: The Goddess of Millions, I have explained in detail how the Attukal temple, which was originally a mudippura (typically a place of entertainment for farmers), worshipped by OBCs and Dalits, was grabbed by upper castes. The priestly duties were usurped by Brahmin priests and the administration by the Nair community. This Brahminisation has happened in the Kodungallur temple and many others. The Sree Padmanabhaswamy temple has a well-known connection to the Dalit Pulaya caste, but the Travancore royals and Brahmin priesthood are the ones calling the shots there now. The decimation of local religious practices is a long, tragic story.

Is there a Buddhist past to the Sabarimala temple?

Some scholars argue that there was a period of time when the Sabarimala temple was a Buddha Vihara. The devotees’ call of ‘Sharanam’ is said to be a remnant of the chant ‘Buddham Sharanam Gachami.’ Besides, the features of the Ayyappa idol are similar to the Buddha in meditation. Historian A Sreedhara Menon sees similarities between the Buddhist ahimsa principles and the Sabarimala pilgrimage vows of vegetarianism, non-violence and abstinence from sex. There is another view that Ayyappa is Nilakantha Avalokiteswara of Buddhist lore.

PK Sajeev, who represents a large group of Mala Arayas, says the first three priests of the Sabarimala Temple were from this tribe. Is there documentary evidence or an oral history tradition that supports this argument?

According to the Mala Arayas, the first priest of the Ayyappa temple was Karimala Arayan; the second, Thalanani Arayan; and the third, Korman Arayan. From my interactions and explorations, I feel it is reasonable to conclude that the Sabarimala deity’s origin can be traced to the Mala Arayan.

How did the Thazhamon Thantri family finally get rights to the running of the temple? What was the role of the Pandalam royal family in the whole thing? What happened to Mala Arayans who were priests there before them? Were they offered some status after this ‘appropriation’?

It was in 1902 that the Thazamon Thantri family grabbed the rights of the temple. I think their strategy was similar to the ways in which many other temples in Kerala were appropriated by Brahmins. The Pandalam Royal family might have helped the Thantri family, using their connection to the Ayyappa legends that were deliberately lapped up as a part of Hinduisation. No important ancient Hindu sacred texts from the north Indian Hindu stream have any reference to a deity called Ayyappa. The whole story connecting Ayyappa and Dharma Shastha is a later creation.

Where did the Thantri family come from?

My view is that the Thantri family might have been brought to Sabarimala as part of an orchestrated strategy of Brahminisation, displacing indigenous spiritual traditions.

The Canada-based researcher Radhika Sekar says in her book—The Sabarimalai Pilgrimage and Ayyappan Cultus, written in the 1980s—that in Sabarimala, Lord Ayyappa is in ‘Vanaprastha’ mode. Do you agree?

Vanaprastha is the last stage of the ashrama system that comes after the Grihastha ashrama or the householder stage. Dharma Shastha is depicted as having two wives, Poorna and Pushkala, and there is no indication in any scripture that he ever took Vanaprastha. Ayyappa is believed to have merged with the Dharma Shastha that already existed in Sabarimala.

What do you think are the reasons for the volte-face of the RSS on the Supreme Court verdict?

The RSS has been vocal about the need to permit Hindu women of all ages to worship in all temples. The RSS even welcomed the Supreme Court order initially. The pro-Sangh newspaper Janmabhoomi published an article supporting the judgment. And even the BJP welcomed it at first. All of these organisations took a U-turn later and began supporting an agitation driven by some extremists such as Rahul Easwar and others. They were also guided by political reasons.

What do you think will be the long-term consequences of the ongoing protest in Sabarimala?

The ongoing protest seems to be an attempt by political parties to exploit religious sentiments for electoral gains. Eventually, the protestors will have to come to terms with the entry of all women into the temple and start thinking of creating awareness about how it is justified. Considering their penchant for changing their views so far on this issue, I won’t be surprised if the Sangh again changes its stand to favour women.

One important outcome of this protest, I feel, is the assertive stance of Mala Arayas about their ancestral claim on the Sabarimala temple. This will inspire other oppressed castes to come forward with evidence to reclaim their rights over other temples in Kerala that were appropriated by Brahmins and savarna castes. In the long run, this reactionary conservative backlash against the Supreme Court and the Indian Constitution could embolden progressive people to campaign for upholding the rights of lower castes and even women to perform priestly duties in Hindu temples.

A Tale of Two Temples
A Crisis of Faith: The Wages of Selective Secularism
Sabarimala: Among the Believers
Sabarimala: A Trek Too Far