Modi as the most popular dealmaker 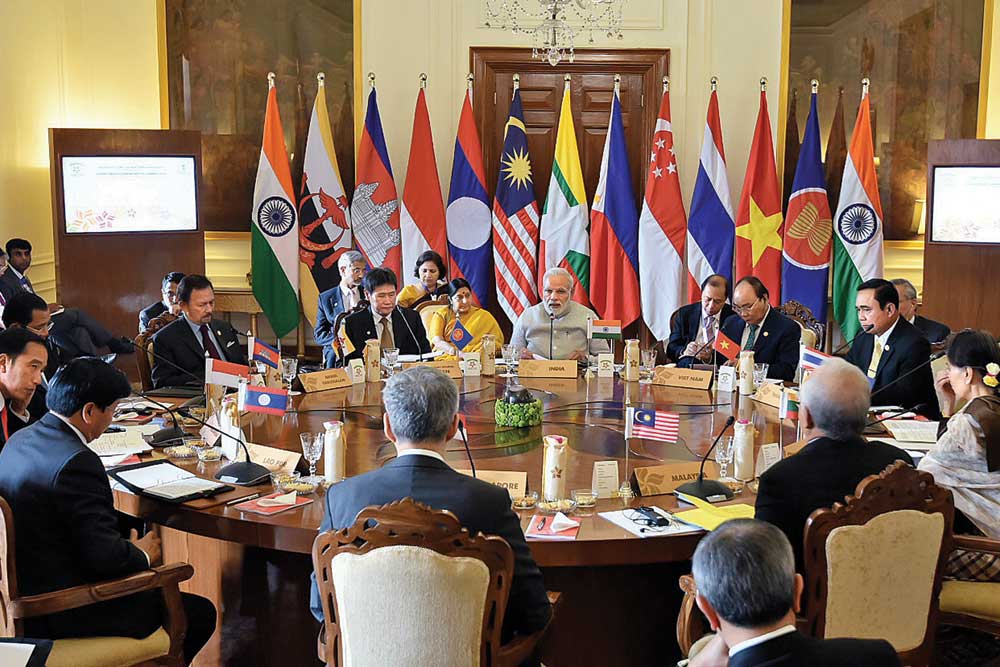 WE LIVE IN a world that is in perpetual crisis. In so many places, both near and far, there is violence, conflict, poverty and disease. Making sense of it all is overwhelming, what with all the noise and confusion swirling around the globe and exacerbated by social media. The line between truth and fiction—as embodied by the phenomenon of fake news—has never been more blurred.

And yet, in the midst of this global hot mess, over his nearly four years in power, India’s Prime Minister has calmly navigated the world and confidently carried out a highly effective brand of diplomacy. In so doing, Narendra Modi has helped achieve a key foreign policy objective: deepening India’s presence on an increasingly crowded world stage.

Modi has travelled extensively. According to the Ministry of External Affairs data, as of January 2018, he had made about 70 foreign visits in total—many of them within Asia, but also throughout Europe, the Middle East, Africa and the Americas. Modi’s predecessor, Manmohan Singh, had made about half as many foreign trips after a similar period of time had elapsed during his first term as premier.

One of the more striking elements of Modi’s globe-trotting diplomacy has been his proclivity for pageantry. Early in his term, there was the visit to New York that featured an address at Madison Square Garden before a capacity crowd of cheering Indian- Americans, as well as an appearance at a star-studded anti- poverty shindig in Central Park where he shared the stage with the likes of Jay-Z and Alicia Keys. More recently, he jetted off to Davos—the first World Economic Forum appearance by an Indian premier in two decades—before returning home to welcome the leaders of the ASEAN states for a summit and then hosting all 10 of them at this year’s Republic Day parade.

There’s been much more of this too, from rubbing shoulders with the world’s biggest business bigwigs to showcasing ‘Make in India’ at flashy trade shows. It all makes for a remarkable contrast with the more understated diplomacy of Singh, Modi’s more bookish and camera-shy predecessor.

And yet, Modi’s foreign travels are not just meant to indulge his penchant for pomp. When he engages in international diplomacy, he means business. He gets things done, and makes deals—deals that help address key national interests in a big way. Witness his accord with the United Arab Emirates to invest up to $75 billion in infrastructure, which the business community in India cites as a critical need. And recall his energy deals, including an oil exploration accord with Vietnam and a uranium agreement with Australia. These deals are no small matter for a nation that according to economists must triple its energy supplies in order to return to double-digit growth. Modi has also inked a transport corridor pact with Iran and Afghanistan, which could give India—for the first time—land access, via Iran, to key markets in Afghanistan and Central Asia.

Furthermore, Modi has helped India gain entry to a series of prestigious clubs, from the Shanghai Cooperation Organization to the Missile Technology Control Regime and the Wassenaar Arrangement, an export control group. India is also the second top stakeholder in the new Asian Infrastructure Investment Bank, and it hopes to join the Regional Comprehensive Economic Partnership (RCEP)—if the still-under-negotiation arrangement ever comes into force. RCEP would be a mammoth trade bloc comprising 30 per cent of the global economy, and it would take on added importance given the struggles of the Trans-Pacific Partnership, a more well-known counterpart.

In effect, Modi is embedding India in both long-existing and newly emerging global architecture. Even as much of the world— including its sole superpower—telegraphs a desire to retreat, India is enthusiastically embracing its global engagements.

True, there have been setbacks. A permanent seat on the UN Security Council remains far out of reach. China’s veto power has denied India much-coveted membership in the Nuclear Suppliers Group. Modi’s efforts to isolate Pakistan on the world stage have failed, thanks in great part to the $62 billion China- Pakistan Economic Corridor, a massive project meant to better integrate Pakistan into the global economy. Additionally, Islamabad—perhaps anticipating a decline in its relations with Washington—has managed to deepen its ties to the likes of Turkey and Russia.

India continues to defy the divides of international relations. Modi has maintained the country’s strong relationship with Moscow, even while unabashedly pushing for a deeper partnership with Washington

Furthermore, despite his extensive travels around Asia, on some levels Modi’s foreign policy within India’s broader backyard has fallen flat.

This isn’t for lack of trying. The Modi Government has prioritised its diplomacy with Asia; early on, it announced a ‘Neighbourhood First’ initiative to drive its engagement with South Asia and an Act East policy to guide relations with neighbours further to the east. That’s a wise priority—it makes good strategic sense for a rising power to get its backyard in order even as it seeks to gain a foothold in more far-flung regions.

And yet, even as India has secured modest energy infrastructure deals with Bangladesh, Myanmar, Nepal, and Sri Lanka, it has become embroiled in neighbourhood tensions—not just with Pakistan, but with smaller countries like Nepal. New Delhi has also been helpless to prevent Beijing from extending its tentacles of influence deeper into South Asia, including in contested territory like Doklam and Gilgit-Baltistan. Further to the east, where India finds a friendly neighbourhood—from close partners Japan and Australia to ASEAN countries that share New Delhi’s concerns about Beijing’s encroachments—New Delhi faces fewer obstacles, though China’s influence, particularly as seen through investments, remains extensive and largely uncontested.

In the grand scheme of things, however, these setbacks have not detracted from Modi’s calm, collected, and—above all— clever diplomacy. Indeed, the days of non-alignment may be over, but India continues to defy the divides of international relations. Take the US-Russia rivalry. Modi has maintained India’s strong relationship with Moscow, even while unabashedly pushing for a deeper partnership with Washington. “Even a child in India if asked to say who is India’s best friend will reply it is Russia,” Modi said in July 2014, just two months before his first summit with Barack Obama. “Because Russia has been with India in times of crisis.”

Modi has also adroitly tiptoed around the Arab-Israeli conflict, cultivating a deeper partnership with Israel even while maintaining strong ties with the Arab states and Iran—a policy that reflects good diplomacy but also prudent politics, given New Delhi’s strong hydrocarbon dependence on Iran and the Arab Gulf states. One of Modi’s diplomatic tour de forces was his Government’s handling of the recent revelation that the Palestinian ambassador to Pakistan had shared a stage with Hafiz Saeed. India’s External Affairs Ministry released a statement characterising the incident as ‘unacceptable’. Soon thereafter, the ambassador was sent packing—and India’s relations with the Palestinians hardly suffered.

WHAT REALLY STANDS out about Modi, however, is his popularity abroad. With several exceptions— Pakistan and the broader human rights community, to name a prominent few—India’s premier is perceived quite positively. In fact, according to a Gallup/CVoter survey released several weeks ago, Modi is the third most popular leader in the world—trailing only German’s Angela Merkel and France’s Emmanuel Macron. This represents the highest ranking an Indian prime minister has ever received in this poll. Remarkably, even back in December 2014— just several months after Modi took office—a GMO Research survey capturing sentiment in 30 different countries found that Modi was ranked as one of the three top-performing leaders in the world.

Modi is welcomed in foreign capitals with open arms—a far cry from the back of the hand that greeted him during his largely forgotten persona-non-grata days. At home, his associations with discriminatory policies and far-right causes and individuals—including Yogi Adityanath, the virulently anti-Muslim Chief Minister of Uttar Pradesh, selected by Modi last year—may rankle many. His connections abroad, however, don’t generate much concern among the international community. Modi is on great terms—bear hug-worthy great terms—with three of the world’s most controversial leaders: Donald Trump, Benjamin Netanyahu, and Vladimir Putin. And yet this hasn’t penalised him in the court of global public opinion.

Modi’s popularity is particularly striking in America, where he was treated as a pariah in his pre-premier days. He has been warmly welcomed in Washington by both Obama and Trump. He has consistently attracted supportive audiences—from business leaders to policymakers—on his multiple visits. In 2016, he was given the honour of delivering an address to a joint session of Congress. His speech—peppered with references to American historical icons and US popular culture—received a standing ovation. According to some reports, chants of “Modi! Modi!” echoed in the halls outside the House chamber following his address. To be sure, his visits to America have also been greeted with hostile protestors—but there have typically been only smatterings of them, not mass crowds.

Admittedly, outside the Washington DC Beltway, Modi is far from a household name. However, that’s just another indication of how perceptions of him have changed in America. In 2014, when Modi came to Washington for the first time as Prime Minister, Indian journalists in town for the visit asked me to take the pulse of Americans and assess what they thought about Modi’s visit. I conceded that many, if not most, Americans probably didn’t even know he was in town. In effect, even in the early months of his premiership, Modi had become perfectly innocuous to the point of being invisible—a far cry from the banner headlines he once generated in the United States for his association with the Gujarat riots, and his consequent inability to receive a US visa before India’s 2014 General Election.

With Modi, the notion of popularity is a truly striking thing. His reputation has enjoyed a remarkable rehabilitation in the eyes of the international community. And Modi largely remains a popular figure even at home—despite struggles with an economic reform plan he was elected with a large mandate to carry out, despite controversial policies like demonetisation, and despite anti-Government protests targeting unemployment and religious discrimination. A November 2017 Pew poll found that nearly nine out of ten Indians hold a favourable view of him, and that his favourability rating was 30 percentage points higher than his closest competitor, Rahul Gandhi of the Congress Party.

Modi’s domestic approval ratings would make most leaders envious. And yet, thanks in part to his effective foreign diplomacy, he’s probably even more popular abroad.

We live in an era that is, to quote William James, a ‘blooming, buzzing confusion’. Still, amid all the madness, this much is crystal clear: Prime Minister Modi has blazed an impressive diplomatic trail around the globe, leaving many positive impressions in a troubled world that could certainly benefit from more positivity.