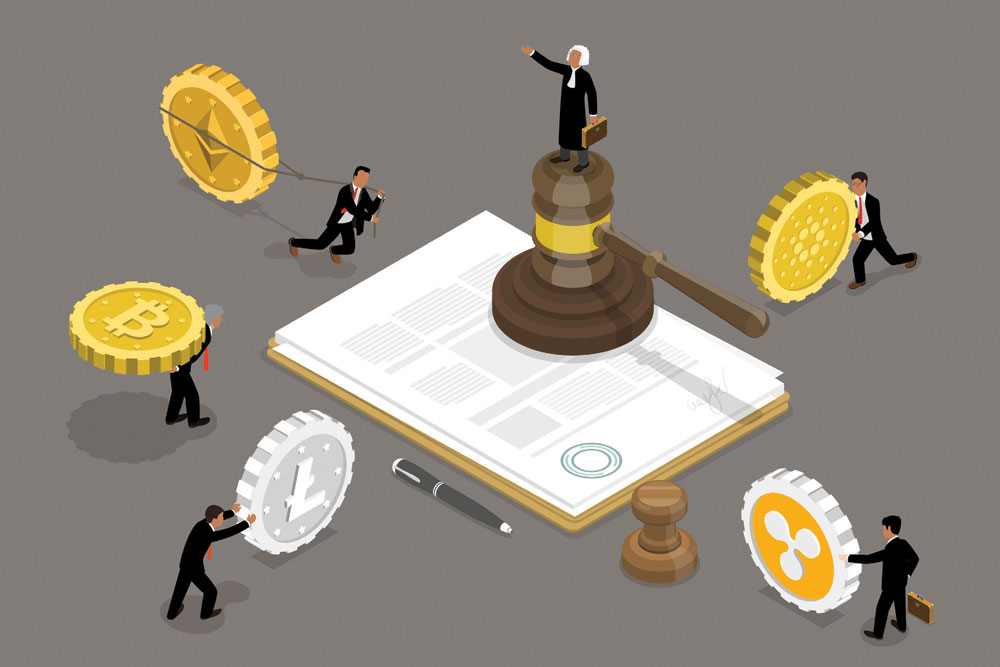 
CRYPTOCURRENCY HAS BEEN one of the most discussed and debated topics in recent times. Crypto as a concept first emerged back in 2008 with the release of a paper titled ‘Bitcoin: A Peer-to-Peer Electronic Cash System’ by a pseudonymous developer who goes by the name Satoshi Nakamoto. The technology that it is built upon is even more intriguing. Blockchain, simply put, is a digital ledger of transactions which is duplicated and distributed across the entire network of computer systems. Each block in the chain has a number of transactions. Every time there is an additional transaction, the transactions are added to every participant’s ledger and recorded with an immutable cryptographic signature called a hash.

While the actual network took some time to start with the first transaction, it was only in 2010 that Bitcoin was swapped in exchange for a commodity, a pizza. Yes, Laszlo Hanyecz, a developer, became the first person to use Bitcoin in a commercial transaction that made him buy two pizzas for 10,000 Bitcoins. It was then a transaction against a piece of futuristic experimental technology. Those 10,000 Bitcoins, 10 years later, stand at around Rs 2,600 crore approximately. Hence, May 22nd, 2010, the day the pizzas were bought, is called “Bitcoin Pizza Day”.

By 2011, there were other cryptocurrencies coming into existence—Litecoin, Swift coin and others making their debut. Over time, Bitcoin prices started to see a steep gain, from a mere $5 in 2012, it shot to an approximate $1,000 by 2017. This naturally meant increase in the number of crypto exchanges coming into existence in India and globally. In recent years, there has been an enhanced level of public awareness of Bitcoin specifically, and blockchain as a technology. Crypto has multiple use cases and can be used to implement smart contracts, acts as a technology layer for various applications, and serves as an alternative investment, among many other utilities it has.

The world has witnessed a surge in cryptocurrency adopters by 190 per cent between 2018 and 2020 with over 20 crore users and a market cap of around $2 trillion in April 2021. While there is no formal survey data, going by estimates, there are about 1.5 crore Indians holding cryptocurrencies today valued at around Rs 15,000 crore, with trade volumes at around Rs 60,000 crore monthly. Out of $5.5 billion invested in startups in this space, Singapore-based blockchain companies received $744 million in capital in the past six to eight months alone while India received just 0.2 per cent.

However, despite the sector being such a promising one, it has had a rather bumpy ride due to its volatility and lack of an identified owner. In India, the Reserve Bank of India (RBI) has expressed concerns regarding cryptocurrencies since 2013 onwards and in 2018, RBI called for a ban on cryptocurrencies, prohibiting all types of banks and payment system providers from dealing with virtual currencies and their users. This decision put many emerging startups in an existential crisis and subsequently they had to approach the Supreme Court which gave a favourable verdict striking down RBI’s ban order.


India may initially consider prohibiting crypto as a payment instrument, solely allowing holding and trading. Exchanges must ensure due diligence

The fundamental challenge that the industry has run into for so many years is the common perception that cryptocurrency, by virtue of having currency in its terminology and coins in its brands, is a direct threat to legal tender currencies and becomes a replaceable option against fiat currency. While the concerns of the Government, and more so of the regulator, may be legitimate, fundamentally, there is a need for India to adopt disruptive technologies through enabling provisions with checks and balances while leveraging the immense potential and use cases that these technologies offer. In fact, countries such as the US, Japan and Germany, among others, have enabled evolving regulations realising the potential and opportunities arising from the sector.

The World Economic Forum (WEF) reports indicate that blockchain expertise is clearly emerging as one of the fastest-growing skill requirements, thereby creating huge livelihood opportunities in future. There will also be a huge demand for jobs and work opportunities like blockchain developers, architects, designers, quality control, engineers, apart from crypto brokers, ICO advisors, crypto journalists, finance, legal, accounting, marketing, analysts, etcetera. An area India has leveraged well in the past in the IT and ITES (information technology enabled services) space but now up for grabs globally.

Thus, the need of the hour is regulation that is enabling and policing likewise. It is in this direction that IndiaTech.org, an industry body representing Indian startups, unicorns and their investors, recently proposed a very practically implementable 5-point framework to regulate crypto in India. This framework suggests defining crypto assets and exchanges, creating accounting and taxation mechanisms, enabling FATF (Financial Action Task Force), AML/CFT (Anti-Money Laundering and Counter Financing of Terrorism) provisions and a self-regulatory framework. The recommendations clearly state that the aim of regulations should be mitigation of all risks associated with crypto and suggest checks and balances which should create an enabling regulatory environment to foster these companies in the space and grow out of India.

The whitepaper tries to address the core insecurity around being a challenge to legal tender by advocating for India not to grant it the status of a virtual currency but rather to treat it as a digital asset. The paper further states that once cryptocurrencies are defined as a digital asset class similar to gold, stocks, or marketable securities, a majority of other rules and regulations needed to govern them automatically fall in place.

The IndiaTech.org whitepaper strongly recommends further that there should also be a mechanism for registering Indian crypto exchanges and granting them recognition. By doing so India will save billions of dollars of revenue that may be payable to foreign exchanges. A minimum ownership of 26 per cent by Indian founders/entities in crypto exchanges similar to the banking sector (FDI capped at 74 per cent) has been prescribed.

The paper also elaborates multiple checks and compliances to improve safeguards and trust factor through a series of compliance, verification and reporting mechanisms like an integrated KYC (Know Your Customer) process administered by crypto exchanges with inbuilt mechanisms to report all trades for taxation and suspicion purposes.

The FATF has also been active and has been coming up with guidance to implement necessary safeguards that are being adopted by different countries. The paper recommends issuance of necessary Indian accounting standards through accounting bodies like the Institute of Chartered Accountants of India or the Institute of Cost and Management Accountants of India for valuation, accounting and disclosure, and classification under “Current Assets” in the balance sheet.

Once cryptocurrencies are defined as a digital asset class similar to gold, stocks, or marketable securities, a majority of other rules and regulations needed to govern them automatically fall in place

The recommendations, furthermore, insist on putting in place a mechanism and identified authority to report suspicious transactions. To ensure that notorious or rogue elements are kept out, it says recognition needs be granted to only those crypto assets that give access to forensic analysis and can be subjected to defined lawful enforcement while specific privacy-focused crypto assets may be prohibited. For example, certain crypto assets, such as Bitcoin, are traceable due to their open-ledger blockchain system. To further reduce the probabilities of misusing crypto, crypto assets must also be brought within the purview of established money-laundering regulations.

In terms of taxation, the recommendations state that these assets should be treated under Income from “Profit and Gains from Business and Profession” or “Capital Gains/Losses,” dependent on the holder’s type of business, holding and the timeline of ownership, while exchange revenues could be subject to GST. The recommendations also state that individuals holding crypto assets at the end of a financial year should disclose their holdings in their tax returns for which adequate disclosure sections should be created in tax returns. For individuals/organisations generating crypto assets through mining, it should be ideally treated as self-generated assets with a separate computation for the cost of acquisition. As far as import is concerned, appropriate FEMA (Foreign Exchange Management Act) regulations with identified HS (Harmonised System) codes should be applied to crypto assets purchased from persons outside of India.

For individuals or businesses, trades in goods or services against any crypto assets should not be considered cash transactions but rather as “barters”. Alternatively, India may initially consider prohibiting crypto as a payment instrument, solely allowing holding and trading. Since a regulatory framework for tokens does not exist, exchanges must ensure due diligence on issue of new tokens. For instance, countries such as the US apply the Howey Test to determine if tokens are securities.

The crypto industry is one which will need the combined efforts of various government departments, ministries, the regulator as well as the industry to create a wholesome regulatory environment which seems easier to go ahead with if the recommendations of IndiaTech.org are considered. Until such time, the industry should be allowed to function on a self-regulatory model which would define a code of conduct. Self-regulation has proven successful for emerging sectors with a government-recognised body to implement this self-regulatory model.

India is a producing and a consuming economy, which is not a luxury other countries enjoy. If India adopts future emerging tech early and builds its base around the same, with the right checks and balances, we can become a home to innovations and even aim for a $10 trillion economy.