Dispatch from the Magic Mountain 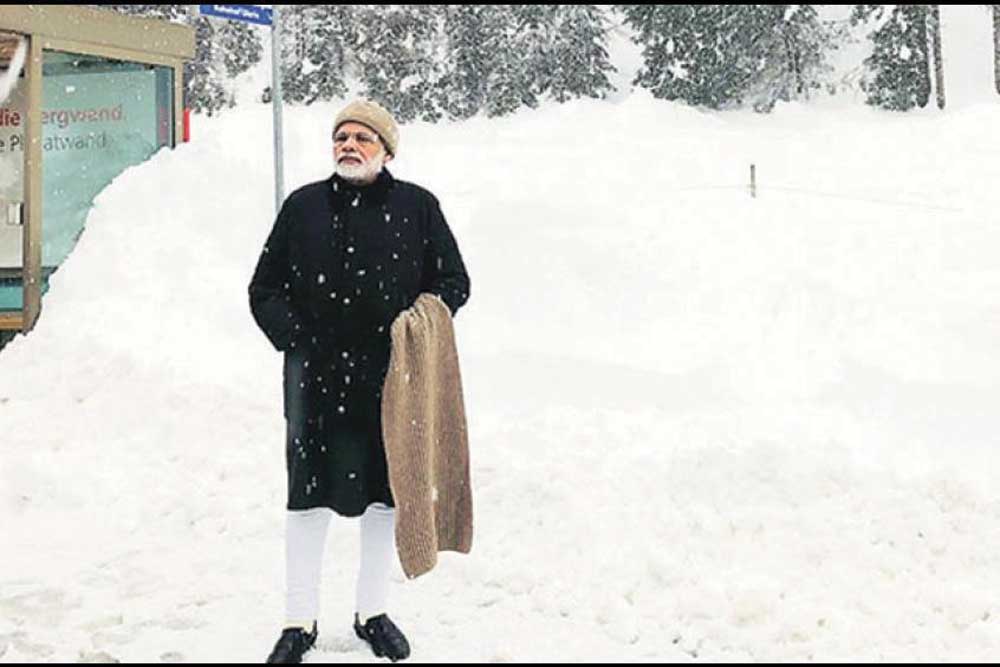 THE OFFICIAL programme at Davos has never been a place to sign business deals, as much as it has been a space for first contact, learning and friendship in a congenial and liberal environment amongst leaders across sectors and countries. Speculation over business deals here have been overrated by the media, whereas the friendships made and knowledge shared have often been grossly undervalued.

I am in Davos this year with my husband for the launch of my first book, Indian Instincts: Essays on Freedom and Equality in India. The book is a collection of essays that holds a mirror to what we Indians have become today. Never before has a book on India—or any important commercial book, for that matter—been launched on the magic mountain. But Penguin Random House, the publisher of my book, had felt that Indian Instincts would be equally appealing to any non-Indian who is interested in knowing more about India, making Davos an ideal venue to present this book to the world.

This is my fourth Davos, but the earlier three instances were during the time that I was an employee of the World Economic Forum.

On the first day of Davos this year, my mind is racing with many memories of being backstage putting together invitee lists, programme flows, interaction designs, and nightcaps in the previous years I was here. I can also not resist noticing that a few things have indeed changed here since my last visit.

First, there has never been so much snow in Davos— not even in the past 20 years, I am told! Second, outside the Congress Centre that hosts the official programme of the World Economic Forum, a remarkable new bustling marketplace for business and trade lobbying activities has sprung up that has a distinct carnival-like spirit amongst thousands of people who have arrived here uninvited by the Forum. These people are here to meet, exchange business cards, and push their agenda. Third, never before has India been so prominent at Davos. It has been 20 years since an Indian Prime Minister last agreed to participate in the Forum’s annual meeting. This year, Prime Minister Modi has participated with panache, addressing the opening plenary by emphasising the need to fight climate change, terrorism and protectionism. He is at the helm of a strong government delegation as well as a 100-member party of business leaders from India, besides a few media and cultural trailblazers.

“This is the confidence from the Indian political leadership that the international community across all sectors has been yearning to see!”

“It is odd that your Prime Minister opened his speech with climate change.”

These were some of the comments I heard after Prime Minister Modi’s speech at the plenary.

THIS YEAR INDIA has not just one—as was the case earlier—but two ‘India lounges’ that bring together Indians and India-lovers here. The exteriors of the only five star hotel in Davos Platz, the Steigenberger Grandhotel Belvédère, have been plastered with massive banners beckoning investments in Andhra Pradesh. Other significant real estate and buses running in Davos Platz have similar hoardings about India. Indeed, there could not have been a more idyllic setting for the launch of my book.

After the opening plenary, I set off to attend the traditional lunch hosted by the Hinduja family at the nearby Sunstar Hotel. At lunch, I notice at least five heads of African states at the table next to mine, as the emphasis of the event is on the Hindujas’ foray into investing in Africa. Following a panel discussion that pitches to the audience the grand opportunity to invest in countries of that continent, I get a chance on stage to say a few words about the India story too—which I insist is not just about its GDP but what ordinary citizens get out of the economy.

Never before has India been so prominent at Davos. The exteriors of the only five star hotel in Davos Platz have been plastered with massive banners beckoning investments in Andhra Pradesh

THE AFTERNOON SUN is by now shining bright on Promenade strasse, which is the central road in Davos Platz that is currently choked with cars ferrying participants and flanked by pop-up lounges set up by various countries, corporations and organisations. I have a bunch of meetings at various venues, for which I have to walk in ankle-deep snow. On the way, I meet several old friends and make new acquaintances. Walking in Davos is not only the fastest way to commute but is also the best way to meet people. The evening is spent attending a fascinating panel discussion on blockchain technology in the Accenture lounge.

I check my online groups of Davos participants on the Telegram phone app to make my evening plans. It is possible to be entirely paperless at Davos—the World Economic Forum encourages its participants to use its Toplink app for checking the official agenda, whereas the DavosX app offers live information on the unofficial agenda outside the Congress Centre.

I step in only briefly at the Ukranian party and the India lounge, as they both seem rather dull. Besides, it is my first day in Davos and so I would like to call it an early night, but not before unwinding with friends at the Tradeshift Reserve, a rather eccentric pop-up lounge created by the San Francisco-based technology company Tradeshift. I am particularly interested in this space, as this lounge will be the venue of the launch of Indian Instincts two days later.

DAY TWO AT Davos is packed with meeting old friends who are here, as well as attending panel discussions on subjects as varied as climate change and poetry. A ‘Swedish Lunch’ organised by twins Marcus Widegren and Alexander Widegren is at the snow terrace of the hotel Shatzalp that can only be accessed by a 2.8 km long cable car that departs from Promenade strasse.

Prime Minister Modi has departed, and so, as the day progresses, many members of the Indian delegation are leaving as well. The intimate India lounge is still bustling though with Rana Kapoor, CEO of Yes Bank, Prannoy Roy and Radhika Roy of NDTV, and the very jolly Vijay Shekhar Sharma, founder of PayTM. I also strike a conversation with Canadian documentary maker couple Mark Achbar and Jennifer Abbott, who are here interested in knowing more about Indian corporate culture.

“Women struggling to ensure that their corporate roles match their aspirations or that they get equal access as men to resources at the workplace should not even be an issue we need to debate over,” exclaims Achbar.

STEPPING OUT ON to the Promenade strasse, I notice India’s Minister of Railways and Coal Piyush Goyal, and a bit further, his predecessor and the current Minister of Commerce and Industry Suresh Prabhu. I wind up the evening at the Gender Equality lounge with friends, dinner, and nightcaps at the Steigenberger Grandhotel Belvédère, with Prime Minister Justin Trudeau dancing wearing a hoodie, followed by a last drink at the Tradeshift Reserve. I will need to return here in a few hours for my book.

It is not uncommon to see successful business models create new markets and ecosystems. TED Global has inspired an auxiliary market of TedX events all over the world. Climate change policy talks and interventions have created a climate change industry with a projected value of a trillion dollars by 2020. The bustling business and trade lobby market that has organically sprung up on the fringes of the World Economic Forum is a remarkable new development.