‘Hindus were in Muslim localities and Muslims were in Hindu areas, as if nothing had ever happened! Everyone said that all this was due to Gandhi Baba’ 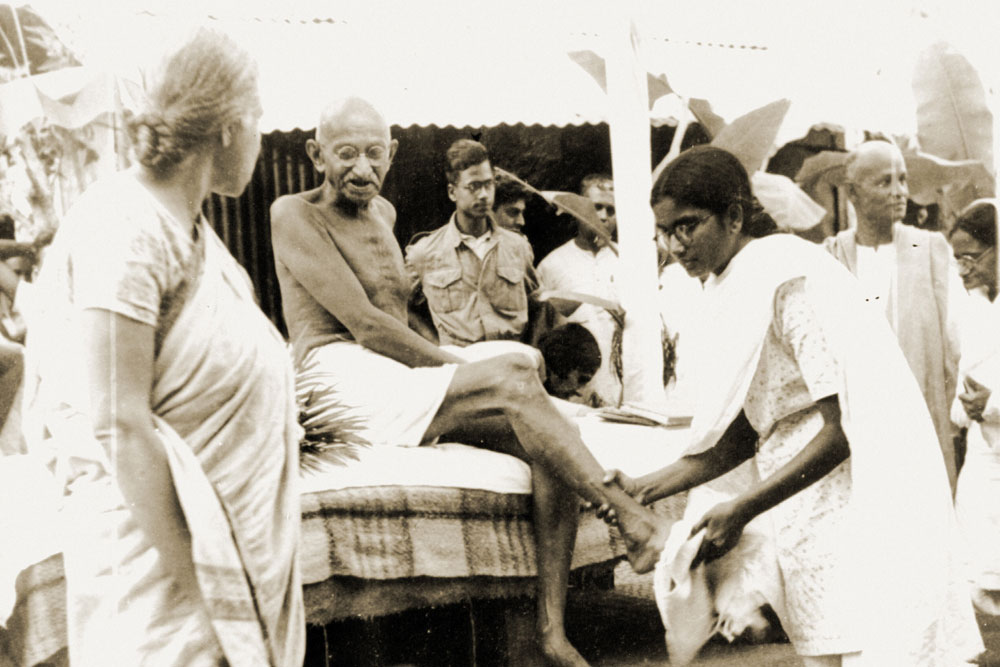 
On August 15th, 1947, Gandhi, along with his constant companions Manu Gandhi and Abha Gandhi, was in Calcutta, staying in the dilapidated bungalow Hyderi Manzil. In her unpublished diary entries from 14th and 15th of August 1947, Manu Gandhi describes a city that just came out of a communal riot

On August 9th, 1947, MK Gandhi, accompanied by Horace Alexander, Manu Gandhi and Abha Gandhi, arrived at Calcutta from Patna and was met by Dr PC Ghosh, chief minister-designate of West Bengal and Professor Nirmal Kumar Bose, and stayed at the Sodepur Ashram established in 1924 by Gandhi’s closest non-political associate in Bengal, Satish Chandra Dasgupta (1880-1979). Bengal, like many other parts of the subcontinent,was in the grip of unabating communal violence. Shaheed Suhrawardy, the outgoing premier of Bengal, urged him to stay on in Calcutta till real peace was restored. As part of their mutual understanding, it was decided that Gandhi and Suhrawardy would stay together in a predominantly Muslim area. An abandoned bungalow “Hyderi Manzil” (now called Gandhi Bhawan) in the Beliaghata area was chosen. This house once belonged to Sheikh Adam, a Dawoodi Bohra who later bequeathed the property to his daughter, Hoosainabai Bengali. Gandhi, accompanied by Manu and Abha, left Sodepur at 2:30PM on August 13th and reached Hyderi Manzil. Manu records her impression of the condition of the house.

“It was a very shabby house without any sort of facility. It was open on all sides, thus being easy of access to outsiders. The doors and windows were broken. There was only one latrine which was used by hundreds of people, including a number of volunteers, policemen and visitors. Every inch of the place was covered with dust. In addition, rain had made the passage muddy. Bleaching powder having been profusely sprinkled, the acrid smell caused great discomfort. There was only one usable room where everybody and everything had to be accommodated, including Bapu himself, his luggage and guests.”

Gandhi, accompanied by Manu and Abha, lived in this house till September 7th, 1947, the day he left for Delhi. It was in this house that he fasted to restore peace in the city from September 1st to 4th, 1947.

The following excerpts are from the hitherto unpublished The Diary of Manu Gandhi, lodged at the National Archives of India. Manu Gandhi (1927-1969) was the youngest of the four daughters of Gandhi’s nephew Jaisukhlal Amritlal Gandhi and his wife Kasumba. Despite the fact—or may be because of it—that she bore witness to Gandhi’s death and that she was a partner in his final yajna, Manu has become a recessive presence in our imagination and continues to be marginal to the imagination of those institutions that claim to be the bearers of Gandhi’s legacy. For most of us, she and Abha Gandhi (née Chatterjee, 1927-1995) are two “walking sticks” of Gandhi, barely distinguishable from each other. Few remember that it was Manu who fundamentally altered the very nature of Ramdhun by inserting Ishwar Allah tere naam, sabko sanmati de Bhagwan to the ancient lines Raghupati Ragahv Raja Ram in a moment of deep inspiration during a prayer meeting on January 22nd, 1947, at Paniala village in Noakhali.

Manu began her diary on April 11th, 1943. She, a prisoner at the age of 15, lodged in Nagpur jail, was shifted to the detention centre at the Aga Khan Palace, Poona, where Gandhi, Kasturba, Pyarelal, Sushila Nayar, Mirabehn (Madeleine Slade) were held. These diaries, written in Gujarati, bear mark of her early hesitation, her hand unformed, her literary ability suspect, her anxiety about the uncertainty of her place by Gandhi’s side are palpable but before long, she overcame the uncertainty.

Manu’s “personal” diaries that bear Gandhi’s signature do not give a correct estimate of the extent of her recordkeeping. She was in charge of all Gujarati correspondence of Gandhi, which included taking down letters that he dictated and later appended his signature to, or making “office copies” of the letters that he wrote by his hand. We owe to Manu the bulk of records of speeches, conversations and correspondence of Gandhi’s last 18 months, perhaps the most sublime and dark period of his life. Her recordkeeping gave us seven volumes of day-to-day with Gandhi: the first volume coming out in 1952 and the last in 1966.

The first part of Manu’s “personal” diary was published in English translation in 2019 and the second part is expected to be published in 2022.

I slept for a while after the prayers. We walked on the street outside. There were many people, but they were peaceful. I made food for Bapu and gave him a shave. I asked him if I could resume washing his clothes. He said, “No. But from the 15th, like we decided, no, not on the 15th. It is a day of fasting. The new year begins from the 16th. You can resume work from that day.”


I slept for an hour after the morning meal. Thereafter, I listened to Bapu’s talks with Suhrawardy about measures to be adopted to re-establish amity. Visitors came in large numbers, I controlled them. I wrote to Harjivandas Balsari in the afternoon regarding Samyukrabehn’s stay for convalescence at Panchgini. We held a public prayer today. There was a crowd of about 10,000. The ground was too small, and people were noisy. But the prayer was done peacefully. Abha and I conducted the prayers. We sang Sankocher bihwalata. After the prayer, I requested the people who had gathered around the house to keep quiet and leave. They asked, “Why is Suhrawardy not here? We would leave only after he comes.” Bapu came out and explained that Suhrawardy had observed roza and he was taking his meal and was expected thereafter. He said, “If Suhrawardy’s heart is pure, it would certainly have an impact, but if he has treachery in his heart, he would not be able to say with me.” Just then Suhrawardy came, he spoke to the people gathered, “Let us all put behind what has happened. It is our good fortune that a great man like Mahatmaji is among us in Bengal. How long shall we continue to fight? All of us want peace. We wish to demonstrate that Hindus and Muslims can live together amicably. If the Hindus of this area were to provide a guarantee that they would not kill the Muslims, we would certainly go next to Park Circus, to Zakaria Street.” A man asked, “Killings have been going on since August 16th, 1946. Are you not responsible for it?” Suhrawardy said, “We are all responsible.” That person said, “Answer the question I posed.” Suhrawardy admitted to his responsibility. This was cheered by people. Just then, we heard that 5,000 Hindus and 5,000 Muslims have embraced each other and taken out a procession. Suhrawardy shared this news and said, “This is the impact of Mahatmaji’s presence. His penance has borne fruit.”

As part of their mutual understanding, it was decided that Gandhi and Suhrawardy would stay together in a predominantly Muslim area. An abandoned bungalow ‘Hyderi Manzil’ (now called Gandhi Bhawan) in the Beliaghata area was chosen

Everyone said that it seems that no killings have happened in the city. Bapu’s presence for only two days has had this impact.

At 9 o’clock, we accompanied Bapuji for a walk to the lake. We had to travel by car there. Bapu walked in the Marwari club. Bapu was unhappy. “This business is wrong! How can I give an hour for a walk? And when will these girls eat?”

On our return, I would press his feet and he went to bed. We had our meal and went to bed at 11PM. All through the night, there were joyous celebrations. People celebrated freedom. There were decorations of light, flags and buntings everywhere. All through the night, crowds gathered at the gate and chanted slogans of Hindu-Muslim unity. Since two in the morning, crowds of Hindus and Muslims gathered to see Bapu. He woke up at 2.30. We said our prayers. Mahadev Kaka passed away on August 15th, 1942; today is his death anniversary and also a day of deliverance for India after slavery of two hundred years. We therefore recited the Gita.

We completed the Gita recitation at 3.45AM. Bapu stepped out. The Hindus in the crowd said there were Muslims also in the gathering, but many of them had gone home as it was the month of Ramzan. Bapu was very happy. All night long, there were celebrations as if it was Diwali. Young children came singing auspicious songs, seeking Bapu’s darshan. Aha! The flag that used to be turned down by the police was today saluted by police of India! Slavery of 200 years came to be eradicated. Bapu would have liked an undivided India. There is no joy in his heart. But people are enthused. When he went out for a walk in the morning, thousands of men, women and children were there for his darshan. Bapu seemed happy. Doctor Saheb said if you keep saying “fast, spin and pray”, people will go ahead and do other things as well. Bapu replied: “What can I do? I ask people to fast even when they get married, have a child. We must recognise the nature of our responsibility.”

Today, I spun for two hours. All day long, groups of people kept coming shouting slogans of victory. Calcutta is entirely peaceful. Suhrawardy does not sleep here at night.

In the afternoon, we went out with Arunbhai to see the celebrations in Calcutta. Everywhere from streets, trucks and cars people were in celebratory mood shouting “Jay Hind” and chants of Hindu-Muslim unity. We also shouted “Jay Hind” from our car. Hindus were in Muslim localities and Muslims were in Hindu areas, as if nothing had ever happened! Everyone said that all this was due to Gandhi Baba.

‘As if the very air of Calcutta changed within 24 hours. We came back at 4.30 and prepared Bapu’s meal. We got ready for the prayers. We reached the prayer ground with great difficulty. Even the police cordon was useless. There was no loudspeaker. We did the prayer without it’

As if the very air of Calcutta changed within 24 hours. We came back at 4.30 and prepared Bapu’s meal. We got ready for the prayers. We reached the prayer ground with great difficulty. Even the police cordon was useless. There was no loudspeaker. We did the prayer without it. Suhrawardy made a good speech. Speaking about the chant of “Jay Hind”, he said, “It is not a matter of coercion at all. We are residents of Hindustan and will chant “Jay Hind”. People clapped. He spoke very well on Hindu-Muslim unity.

Prafulla Babu came for a meeting after the prayers. Thereafter, we went for a ride in Suhrawardy’s car. As soon as we started, people recognised Bapu and chants of “Jay Hind” and “Mahatama Gandhi Ki Jay” rang through. There were lights and decorations. We passed through Muslim areas. Here people stopped the car and shook hands with Bapu.