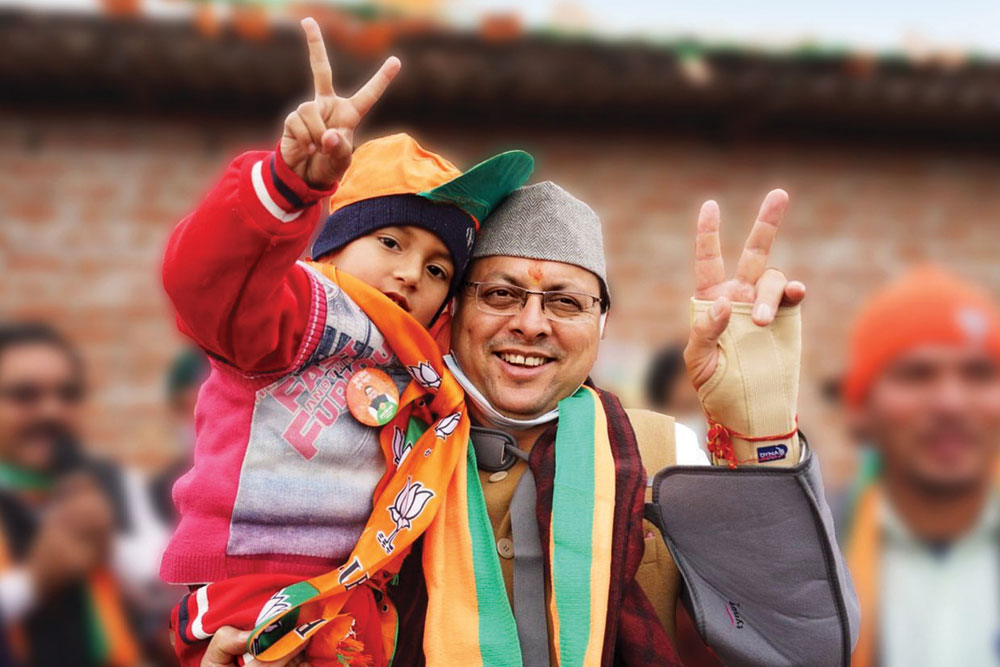 
When Uttarakhand Chief Minister Pushkar Singh Dhami gave the slogan “Ab ki baar 60 paar/This time, we will cross 60,” it had raised eyebrows, amid doubts whether his Bharatiya Janata Party (BJP) will even make it to the magic figure.

The odds had appeared to be against BJP, in a state which had elected Congress and BJP alternately in every state election in the 21 years of its existence. BJP, which had swept the state with 57 of the 70 seats in 2017, faced anti-incumbency, allegations of patronising illegal mining, laments of unemployment and accusations of ‘mismanaging’ Covid during the second wave. The stage was set for Congress to cash in on BJP’s predicament.

But Congress, typically lukewarm to the need of the hour, underestimated BJP’s ability to pick up the pieces—strengthening its organisational machinery from the ground level, consolidating its vote banks and playing its trump card, Prime Minister Narendra Modi. For the first time in the history of Uttarakhand, a party has returned to power for a second consecutive term.

A month after Dhami was sworn in, Modi interacted with women making biscuits at a Rudrapur bakery, lauding their success. On Republic Day, as he paid tributes to martyrs at the National War Memorial in the capital, Modi was seen wearing an Uttarakhandi cap. He held five rallies in the state, speaking a few words of Garhwali in Garhwal and Kumaoni in Kumaon, balancing his outreach to the two regions of the state. It had become clear that Congress was pitted in a direct face-off with Modi.

Political analysts also say, women voters, who outnumbered men by 4.6 per cent in Uttarakhand, played a crucial role in BJP’s victory. “There’s a lot of support for Modi among women. During the lockdown, the Modi government started giving free ration. He connects directly with people at rallies, speaking a few lines of the local language,” says MM Semwal, head, Department of Political Science, HNB Garhwal Central University, in Garhwal’s Srinagar.

BJP swept the state for an unprecedented second term, even as its vote share fell marginally. Interestingly, Dhami lost to Congress’ Bhuwan Chandra Kapri on his turf Khatima and Harish Rawat lost to BJP’sMohan Singh Bisht in Lalkuan.

BJP had launched an aggressive campaign against Congress, accusing Rawat of corruption, sharpening its tirade as the polling day neared. For Congress, which was reluctant to openly declare Rawat, still the party’s most popular leader in the state, as its chief ministerial candidate, it would mean nurturing a new leadership in the state.

This year, even before the election results were out, the turf war for the chief minister’s post had already begun in Congress. The calculations went awry for Congress, which was banking on the state adhering to the trend of alternate governments, anti-incumbency against BJP and its promises on employment, health facilities and education.

The disillusionment with BJP chief ministers notwithstanding, Modi’s popularity had not waned. It dominated the party’s campaign, eclipsing state leaders. Union Home Minister Amit Shah repeatedly said at rallies that if former Prime Minister Atal Bihari Vajpayee created Uttarakhand, Narendra Modi will build it. On the Uttarakhand campaign trail, BJP leaders have consistently evoked Vajpayee, in whose regime Uttarakhand was carved out of Uttar Pradesh and turned into a separate state in 2000. They recall the past, reminding people of the 1994 Rampur Tiraha police firing on activists demanding a separate state, when Samajwadi Party leader Mulayam Singh Yadav was chief minister of undivided UP.

It is the present, more than the past, that gave BJP an edge. As the state went through the Covid lockdown, besides natural calamities, the Central government sent villagers free ration—5 kg of rice and 7 kg of wheat—for each person. Modi, at his rallies, spoke of the future of the state, promising to address unfulfilled bread-and-butter commitments made to the state in 2000, powered by BJP’s “double-engine ki sarkar”, with the party in power in the state and at the Centre. He launched developmental projects in Garhwal’s Dehradun and in Kumaon’s Haldwani. The projects included stretches of the Char Dham all-weather road, which has been widened. At Kedarnath, which Modi has visited several times, he said the next decade will belong to Uttarakhand.

“Modi’s popularity, particularly among women and the elderly, the faith in the double-engine ki sarkar and the public acceptance of Dhami helped the BJP,” says Anoop Nautiyal, founder of the Dehradun-based Social Development for Communities (SDC) Foundation, engaged in issues related to development of Uttarakhand.

Within four months of taking charge, Dhami claimed that his government took nearly 400 decisions benefiting the common man. The state government went on an overdrive. The old-age pension was raised from
₹ 1,200 to ₹ 1,400; children studying in Classes 10 and 12 received ₹ 12,000 in their bank accounts through the direct benefit transfer (DBT) scheme to buy tablets. Dhami promised uniform civil code and strict laws against love jihad. BJP’s mantra was lucid—a fusion of development and Hindutva!

Congress, taking a leaf out of BJP’s campaign, brought an element of religion into its own, even as it focused on bread-and-butter issues and reviving “Uttarakhandiyat/the culture of Uttarakhand.” It gave the slogan “Uttarakhand Swabhiman—Char Dham, Char Kaam,” with four promises—keeping LPG cylinders below ₹ 500, helping five lakh families annually with ₹ 40,000, four lakh jobs over the next five years and health facilities for every family in the state.

“This election was based on personality politics. While BJP has a strong leadership at the Centre, Congress has a mass leader in Harish Rawat. But Congress neither projected him as chief ministerial candidate, nor was able to cash in on the anger against BJP,” says Semwal. With Modi taking the reins, 46-year-old Dhami being projected as chief ministerial face, Congress battling feuds within and his party rebels working against him, the septuagenarian’s battle was an uphill one. His was a lone fight, as people of the state would say “What can Harda do alone?”

Dhami was the 11th chief minister of Uttarakhand. A week is a long time in politics. Eight months are an era. The people have apparently put behind their disillusionment over the frequent changes in chief ministership. Trivendra Singh Rawat, who was chief minister for four years, had apparently earned the ire of the priests of the Char Dham shrines over his government’s decision to form the Char Dham Devasthanam Management Board to control the four shrines of Gangotri, Yamunotri, Badrinath and Kedarnath, and temples affiliated to them. Within four months of taking charge, Dhami withdrew the Act.

With infighting in both Congress and BJP hindering stability in state politics, no chief minister, barring ND Tiwari (2002-07), has lasted a full term in the state. Can BJP buck yet another trend?