His presence in Qatar led to a diplomatic imbroglio 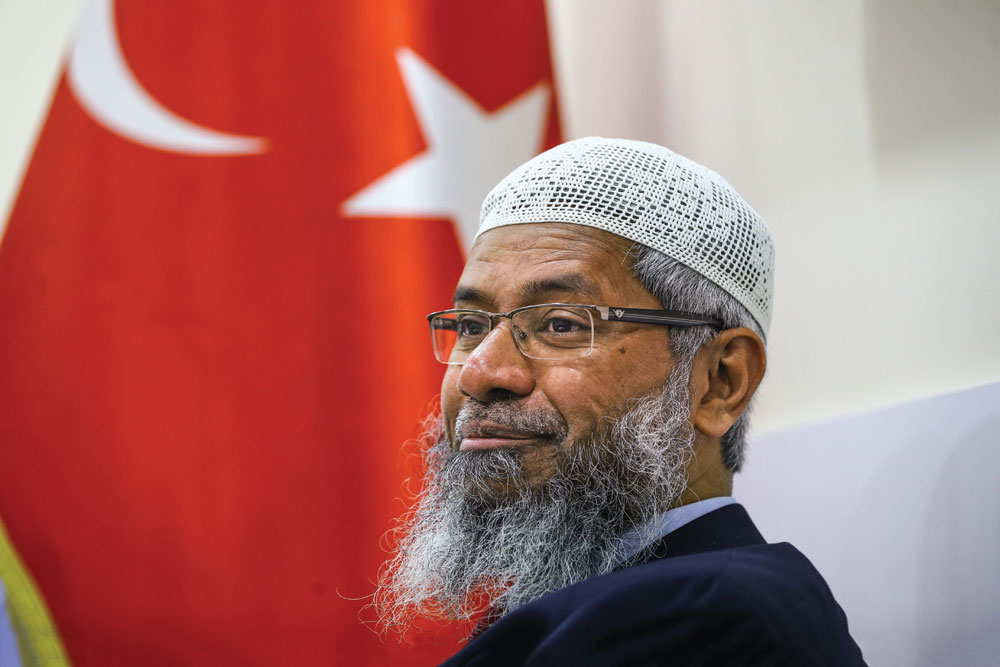 
THAT HIS MERE presence is enough to create a diplomatic imbroglio between India and Qatar says something about the aura of appre­hension that surrounds Zakir Naik, an Islamic preacher now settled in Malaysia after fleeing India. His presence in Qatar during the football World Cup was to give religious sermons and it was initially said to be at the behest of the government there. India protested and even threatened to call off the visit of the vice president to the inauguration of the games. Qatar, belatedly, clarified that Naik did not have any official invitation and the tension is now somewhat diffused, but what happened was in keeping with the many controversies that have dogged him.

Naik distances himself from violence and extremism, as also the name of his television channel—Peace TV—seeks to suggest. But what appears to be straightforward words—terrorism, violence, equality of women—for most people become amenable to many definitions when he begins to talk before the massive audience he commands. What follows is orthodoxy couched as progress, conspiracy theories and a couched rationale for terrorists and terrorism. It is a trick many countries, not just India, has caught on to.

Naik is a doctor and his career in Islamic evangelism began in the late 1980s. It started with educational and charitable works in the Muslim community and was followed by the astute use of media for his reach to increase exponentially. By the turn of the new millennium, he had become a phenomenon. Consider this Open profile from 2009 when he was at his respectable peak and hosting a convention: “Over 10 days, more than a million people came from all over the country. On 35 acres of prime suburban land in Mumbai, several air-conditioned tents went up…Last month when the conference was in progress, there were giant billboards all across the city’s suburban highways, there were advertisements on buses, Muslim drivers had pamphlets on the dashboards of their Meru cabs.” But even then, there were aspects about him that had many worried. One was his defence of Osama bin Laden and turning 9/11 into a conspiracy by the US itself.

There were other distortions. Did he condemn suicide bombers? Of course, unless it was war. Is terrorism wrong? Obviously, but terrorism against anti-social elements is fine and, also, isn’t the US the biggest terrorist? Should apostates be killed? No, unless they commit a crime that anyway deserves a death penalty. There is never a clear “yes” and “no” answer with Naik. Ideas appropriate to medieval societies, like beating wives to discipline them or secondary status of non-Muslims in Islamic nations, are defended with an appeal to scripture and reason, preceded often by the term ‘scientific’.

This is what often lands him into trouble. It has led to him being banned from the UK and Canada because of hate speech accusations. He found himself in trouble in Malaysia, the country that gave him sanctuary, after he riled up its Chinese citizens by terming them as much an outsider as he was. Its former Prime Minister Mahathir Mohamad said in one interview that they wanted him out, but not many countries were willing to accept Naik.

What no one could doubt was his popularity, especially with the youth. It was a tele-evangelism empire in the making until India tightened the screws after the BJP government came to power. In 2016, his organisation was banned. That was the same year 29 people were killed when terrorists opened fire in a restaurant in Bangladesh. One of them was found to be a follower of Naik. There was no direct link to him but Bangladesh banned Peace TV. It is still said to reach 20 crore viewers. Naik is also accused of money-laundering, but attempts by India to extradite him have not been successful. Likewise, the Interpol has rejected requests to issue a Red Corner Notice that would make an arrest internationally possible. A man without a country, pariah to many, Naik remains much regarded in Islamic nations, a reason why he found welcome in Qatar, even if the government now tries to distance itself.