Retreating Arctic ice caps, the plight of the polar bears and the question of speciation in a summer of forebodings 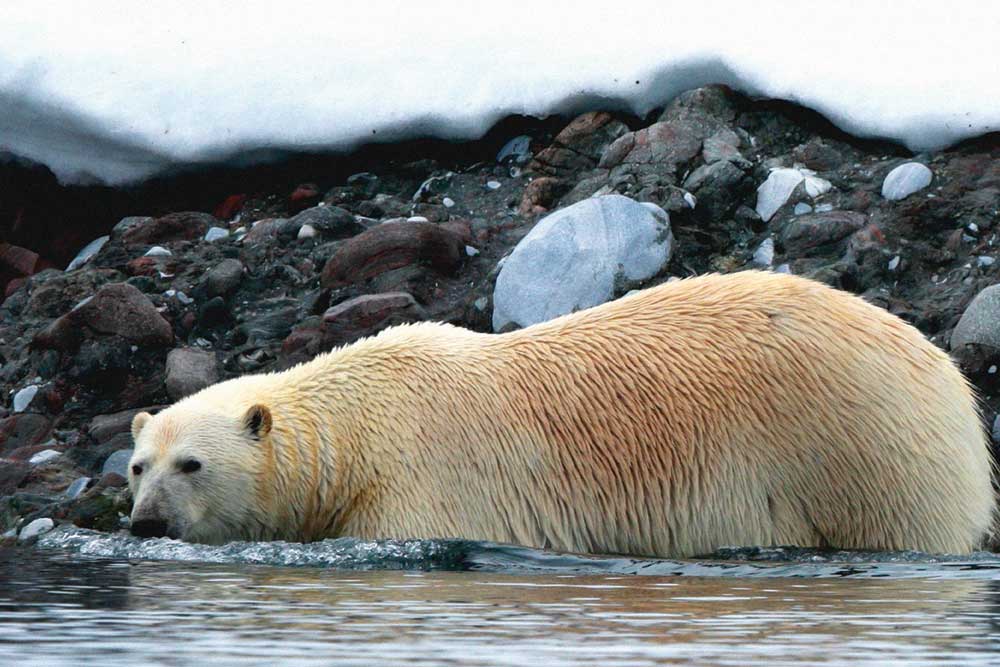 IT WAS JULY and the sea ice had thawed just enough for the rubber dinghy to cut through its glacial sheen. To the port side, a pair of puffins bobbed up and down, their comical beaks reminiscent of a gluttonous child who has just finished a burger, lips stained with mustard and ketchup. To the starboard, kittiwakes screamed in consternation, rising on frigid currents that could have afforded them no buoyancy whatsoever. In the Zodiac, ten of us crouched in our dry gear, eyes transfixed on a spot thirty yards away ashore. In front of us was a patch of ice, crunched up and bloodied, torn asunder by a polar battle that had happened moments earlier. The victor lay over his spoils. A young polar bear, exhausted after having hauled a white-beaked dolphin out of the sea ice and killed it, lay on his prize, his eyes half shut. The ice must have closed in fast on the dolphin and it was rare that it had got trapped in a pool where the bear could reach it. But once the bear had it within paw strike, it must have been all over fast. For the polar bear is a master predator of the Arctic and indubitably the most efficient frozen sea hunter that has ever evolved. This creature was not asleep; surely he could not be, as four dozen glaucous gulls screamed in excitement all around him. The most adventurous of them bob-walked up to the resting bear and pulled a piece of loose blubber from the carcass. The bear was tired and he sprawled over most of what he had killed hoping that he could protect his trophy from the birds. Vae victis, woe the vanquished, and celebrate the victor. For now, at least.

Our young bruin victor, having got a whole dolphin to eat, can consider himself particularly lucky. From what our bear specialist on board the Arctic expedition ship was telling us, polar bears were starving all over Spitsbergen, the polar bear capital of Norway, where we were. With another hot summer (the Arctic was ablaze with colour as a thousand saxifrages bloomed underfoot, transforming what should be a pure white image into technicolor) and with the ice melting quick, there were fewer hunting grounds on the Arctic ice. The thing that polar bears desperately need is ice. But the Arctic ice cap has been shrinking every year and the effects of climate change are nowhere as visible as at the poles. Part of this is due to Arctic amplification, a phenomenon that causes the Arctic to warm up three times faster than the rest of the globe during the same time. This is caused by the fact that albedo, or how well the earth can reflect sunlight, is going down dramatically at the poles. Rising temperatures melt sea ice, which has up to 85 per cent albedo, revealing open ocean water that has only 5 per cent albedo. In lay terms, the water is getting hotter and hotter, melting more ice and reflecting much lesser sunlight back into the atmosphere. Ergo, warmer water, less Arctic ice and more and more sad polar bears.

Oh well, some ladies are getting around it though. With pack ice fast disappearing, polar bears are getting more terrestrial. Their specially evolved pads that allow them to walk on ice can walk hard ground just as well, unlike their large relatives, the grizzlies. Grizzlies can’t get on to ice and are rarely found where there are no trees. They are different species and what caused the two to evolve differently was the presence of ice. But as the two carefully constructed niches come together, the bears have started meeting up as well. And in tough times, love might well be the solution. Male grizzlies have been getting to a few adventurous polar bear lassies out in the western end of their range in Alaska and Canada. Just the way love ends up often among unmatched lovers, there are more and more bastard children making their way into the world as well. In the bear world, these kids are called grolars or pizzlies, hybrids with a dirty white coat and a large grizzly head. But different species are not supposed to mate and produce offspring. At least, they should not, say biologists, with such alarming regularity. This has caused three different worlds of greens much consternation. The bear biologists are divided into ‘let nature take its course’ camp and ‘let’s intervene and keep the polar bear white’ camp. The climate change world is divided into ‘I told you so and the teddies are proving our point’ camp and ‘there is no global warming, that is only God hugging us a little closer’ camp. And the war here is not biological, it is political. The former, in the US is championed by Gore, the latter by Sarah Palin. And as if there is no end to intellectual quibbling, there is the ecological philosopher’s world where the term ‘species’ is being argued thread bare. There are people who believe in what Ernst Mayr said half a century ago and they call themselves the Realists. They believe that species are real, natural extra-mental entities. Basically that polar bears and grizzlies have different ‘essences’ and their being different species has nothing to do with our minds. Mayr used the classic example of New Guinean Stone Age tribesmen describing the same number of 136 species of birds as did Western taxonomists as a proof that species concepts were real and not man-made. Then there are the Nominalists who believe that species are just names we have ascribed to creatures and there is no biological cut off between them. Believe in them and polar bears and grizzlies can do what they want to, for their assigning of different nomenclatures is only a human whim. But believe them and the Darwinian origin of species comes into question. And in Biology, for over a century, to question Darwin is to commit professional suicide. And finally, like in religion and politics, in philosophy too there are the Pragmatists like Kitcher and Dupre who espouse that species exist ‘conceptually’, while really they are not real.

Confused? So must the bears be and it is only the most intrepid of them that can ignore the noise in the debate and focus on the two things that should be foremost in the minds of all living beings: survival and love.

THE MATTER OF speciation has caused much damage in the conservation world. Purists have stymied any effort of pragmatic conservationists in reversing certain extinction. The wild buffalo in India is an example in point. The central Indian population had only one female buffalo for the last decade. After much breeding, there is now one more. But any biologist can tell you that one or two females in a population can only mean disaster for the species. But in this case, it need not be, for there is another subspecies in the Northeast of India which is doing relatively well. It has thousands of females which could easily be bred with the few remaining central Indian males. And certain extinction of the central Indian population can be averted. But if only scientists can look beyond what is pure and what is not. Similarly, the Indian cheetah is extinct and some years ago many of us had proposed bringing in the African cheetah. Well known geneticists postulated that both, having gone through a genetic bottleneck 10,000 years ago, were more or less clones. But the project still hangs fire, balked by self- proclaimed purists. What is genetic purity, then? Do we all not carry a bit of Neanderthal in us, thus mocking traditional species concepts? Does the Indian not have Uzbek genes that came with Mughal colonisers who brought the gene along with the tandoor and naan into India? Does the fact that the human race has judiciously spurned race and geography while producing fertile offspring not make the animal world of racial conservation sound outmoded? Bears are showing the way, biological nomenclature be damned. The Steinian, ‘Rose is a rose is a rose is a rose’ is not what bears are holding up as their Bible, it’s the Shakespearean, ‘A rose by any other name will smell as sweet’.

Some years later, as I write this sitting by a Hawaiian beach, many thousands of miles away from the frozen north, a lady dripping from a just-concluded dip watches a melting sun sink into the sea. She is transfixed by the beauty of the scene unfolding in front of her. As the sun dips in, the water turns incandescent yellow, glowing, glowering and then calming itself once again. She sighs in bliss and shuts her eyes, settling the image into her soul. Thankfully, she is unaware of the plight of the poles, the agony of albedo, the bruising of the bears and of the question of speciation. The sun will set soon on the poles too, and on the bears as well, unless love turns the tables on a well- orchestrated climatic climax.