Revelations from the karmic evolution of life 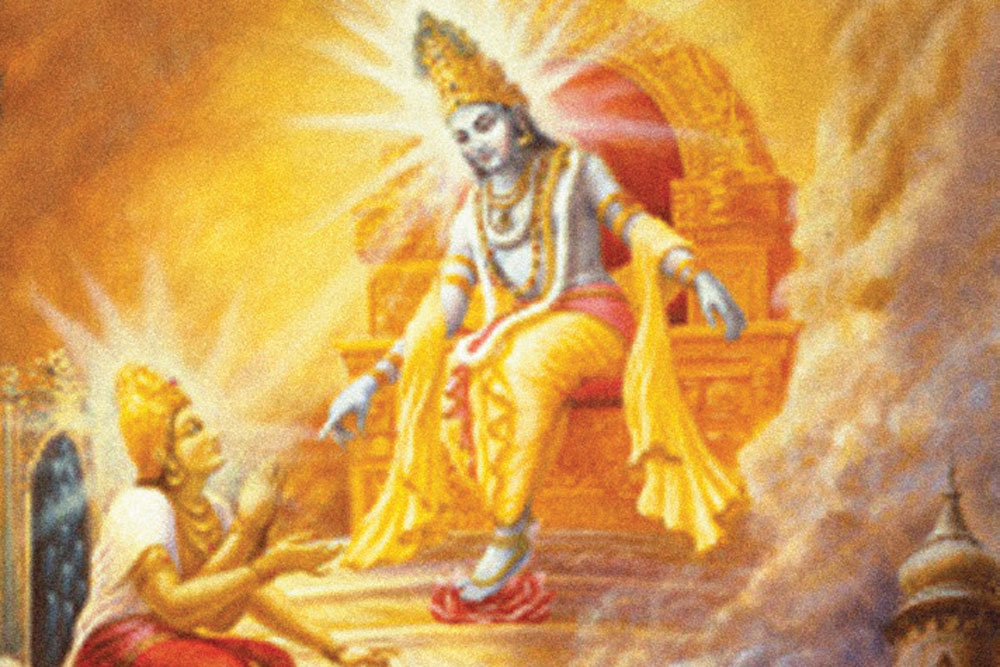 IN THE LAST column, I started on the Anu Gita, one of the several Gitas in the Mahabharata. Among all the Gitas in the Mahabharata, if one leaves aside the Bhagavat Gita, the Anu Gita is the most famous. The Bhagavat Gita has of course been translated the most. The Anu Gita has also been translated, though understandably, not that many times. The earliest English translation I know of is the one by Kashinath Telang, in 1882. As I mentioned in the last column, the Anu Gita is triggered by the prospect of Krishna leaving for Dvaraka, just after the horse sacrifice (ashvamdedha yajña). In its 35 chapters (as per the Critical Edition), the Anu Gita actually has three parts: (a) a conversation between a siddha Brahmana and Kashyapa; (b) a conversation between a Brahmana and a Brahmani (his wife); and (c) a conversation between Brahma and the rishis. All these conversations are repeated by Krishna to Arjuna. Sometimes, only (a) is referred to as the Anu Gita. But the Anu Gita consists of all three parts. In the last column, I started on (a). Let me complete that. Anything within brackets is not part of the text, but an explanation to make comprehension easier.

The siddha Brahmana continued, ‘Good and bad karma performed in this world are never destroyed. The fruits are cooked as one moves from one kshetra to another kshetra. [Kshetra means field. Here, it stands for a physical body.] A high-yielding fruit tree produces large quantities of fruit. In that way, deeds performed with an auspicious and pure mind yield a great deal. This is also true of wicked deeds perpetrated with an evil mind. In this world, the atman places the mind at the forefront and then undertakes karma. After this, listen to how a man enters a womb, when karma is determined, overwhelmed by desire and anger. Inside a woman’s womb, the kshetra is derived from a mixture of semen and blood and from karma, a function of good and bad acts. The brahman (standing here for the jivatman) is subtle and unmanifest in nature. The brahman resorts to the body, but is not attached to anything. That is the reason, it is the eternal brahman. This is the seed of all beings and it is because of this that all creatures are alive. Having entered the womb, the jivatman penetrates all the different limbs in the body. Basing itself on the place meant for the breath of life, it instantly imparts consciousness. The limbs begin to move and the foetus has consciousness. When liquid iron is drained and poured into a mould, it assumes the form of an image. Know that this is the way the jivatman approaches and penetrates a foetus. When fire enters a lump of iron, it heats it up. Know that this is the way the jivatman approaches and penetrates a foetus. When one resorts to a lamp, the light illuminates everything. In that way, consciousness illuminates different parts of the body. Whatever karma has been committed, good or bad, in an earlier body, all of it must certainly be enjoyed. These are thus extinguished and others are again gathered together. This continues as long as one does not understand the dharma that leads to moksha yoga.’ 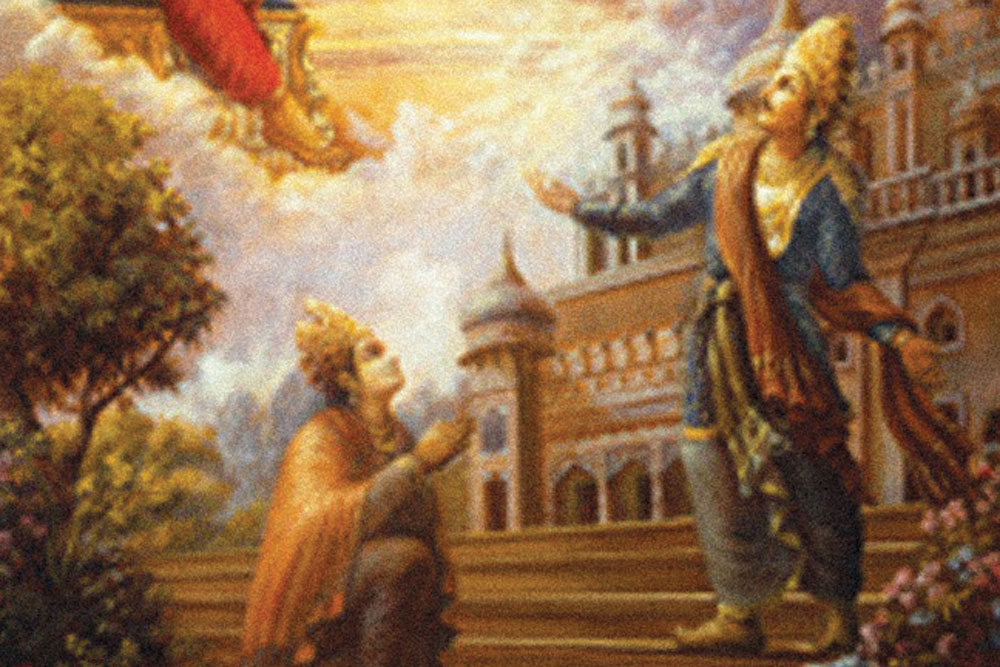 ‘O excellent one! When one is born and is repeatedly circling around, I will tell you about the dharma that ensures happiness. Donations, vows, brahmacharya, sustaining the prescribed rites, self-restraint, tranquility, compassion towards all beings, self-control, lack of injury, not appropriating the possessions of others, uprightness, abstention from futile censure of all creatures on earth, serving the mother and the father, worshipping devas and guests, honouring seniors, tenderness, purity, constant restraint of the senses and ensuring what is auspicious—these are said to be virtuous conduct. Dharma flows from this and protects subjects eternally. This conduct is always seen among the virtuous and they obtain a state that is permanent. Conduct in conformity with dharma is said to be that which is resorted to by those who are virtuous. They are immersed in dharma and this is the dharma that is eternal. If one resorts to this, one never has to confront extreme hardship. When the world is deluded, it is through such rules that it is brought back to the path of dharma. Yogis and those who are emancipated are superior to these virtuous people. If a man follows the appropriate dharma, he is freed from samsara after a long period of time and crosses over. In this way, all creatures have to follow the karma they have undertaken earlier. All the wicked deeds are the reason why one has arrived in this world.’

A person who silently submerges himself in the Brahman, not thinking about anything, not even thinking about his own identity, progressively casting off the layers, is freed from all bonds

‘Who first determined the acceptance of a body? [The adoption of a body is determined by the deeds committed in earlier lives. But what determined the adoption of the first body?] There is a doubt in the world about this. I will tell you about this next. The grandfather of all creatures first created his own body. Brahma then created the three worlds and all the mobile and immobile objects. Having created consciousness in that body, he created Pradhana. [Pradhana has different interpretations in Samkhya. For our purposes, Pradhana is the cause of the material world.] A learned person knows this pervades all the worlds and is supreme.’ This world is said to be Kshara. The other one is immortal and Akshara. [Kshara is destructible, akshara is indestructible. The body is destructible, but the atman is indestructible. The second part of the shloka is difficult to understand. The ‘three’ possibly mean the physical body, the jivatman and the paramatman. These exist together and they also exist separately. One can form different couples out of these three.] There are couples formed of these three. They all exist together, but they also exist separately. In his first creation, Prajapati created all the creatures and the immobile objects. This is what the sacred texts say about that first creation. Thereafter, the grandfather determined the measurement of time and decreed the going and coming of creatures [death and rebirth respectively, and a lifespan for each species].’

‘There may be an intelligent person who has seen his atman in his earlier birth. I will accurately tell you everything that such a person experiences here. Such a person always looks upon happiness and unhappiness as transitory. He regards the body as a vigorous arena for conflicting karma, certain to decay. Whenever there is the slightest bit of happiness, he remembers all the unhappiness. Such a person is able to cross this terrible ocean that is samsara and which is so very difficult to traverse. Immersed in birth, death and disease, he knows about Pradhana. Basing his consciousness on that universal consciousness, he looks upon all creatures impartially. He is indifferent towards everything and seeks for the supreme path and destination. I will tell you and instruct you about the true nature of that. That is the eternal state, without any decay. That is supreme jñana. O Brahmana! I will tell you about it in detail. Hear about everything.’

‘A person who silently submerges himself in that receptacle [the brahman], not thinking about anything, not even thinking about his own identity, progressively casting off the layers, is freed from all bonds. [The shloka is cryptic and some liberties have been taken. The progressive casting away of layers is a reference to the different steps of yoga.] He is a friend to everyone. He endures everything. He loves everything equally. He has conquered his senses. He has overcome fear and anger. He has killed desire. Such a man is emancipated. He looks towards all beings as he does towards his own self. He roams around, controlled and pure. He is without insolence and without ego. It is as if such a man is emancipated in every way. He is impartial towards both life and death, happiness and unhappiness, gain and loss and the pleasant and the unpleasant. Such a man is emancipated. He does not desire anyone. He does not show disrespect towards anyone. He is beyond the opposite pairs of sentiments and is devoid of attachment. Such a man is emancipated in every way. He has no enemy. He has no relative. He has no offspring. He has abandoned dharma, artha and kama. He does not hope for anything. Such a person is emancipated. He has neither dharma nor adharma. He has cast aside everything accumulated from earlier [from earlier births]. When the elements waste away [the elements in the body], he is tranquil in his soul. He is without the opposite pairs of sentiments. Such a man is emancipated. He has no karma. He has no hope and only looks at the eternal universe, always submerged helplessly in ill health, delusion, birth and samsara. His intellect is always focused on non-attachment. He is indifferent towards any type of torment. In a short while, he is able to free his atman from bonds. He sees his own atman, which does not experience smell, taste, touch, sound and ownership and is without form and difficult to comprehend. Such a person is emancipated.’ I will continue in the next column.