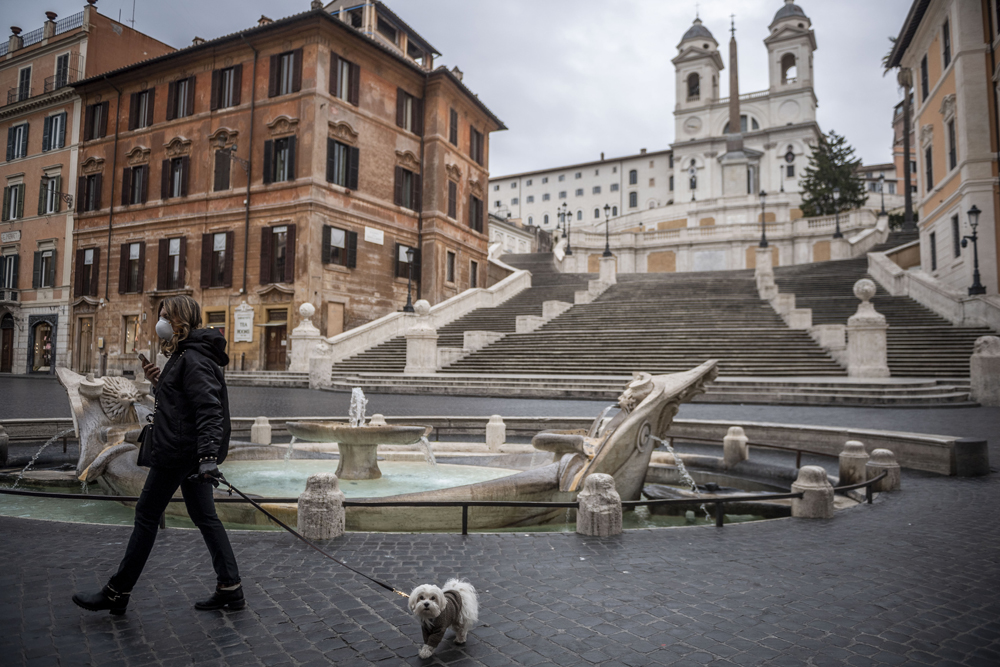 
For the past couple of days, at six in the evening, we have been opening our balconies and windows and playing music and singing. The weather is nice; it looks like an early spring has settled over Rome. We open the windows and sing, together. We wave and smile at each other, even though, despite being neighbours, many of us are complete strangers to one another. We sing pop songs that we all know, songs from the 1960s. Today it was Nel blu dipinto di blu, popularly known as Volare, a song by Domenico Modugno. I am envious of those living in Rione Monti, where the leading voice of a well-known band, the Negramaro, lives. I want to be there when Giuliano opens his window and performs, singing and playing the guitar, my favourite Modugno song—Meraviglioso (Wonderful)—about a man who is dissuaded from committing suicide by ‘an angel, disguised as a passer-by’ who inspires him to open his eyes to the wonders of the world.

Many of us sing our national anthem, dispelling a few myths. There is a problematic association we Italians have with patriotic pride and fascism and the Mussolini era. We usually sing the national anthem and display the Italian flag only during the football World Cup. But today, on a quick trip to the grocery store, I was amazed by the sight of the many flags hanging from balconies and windows. The roads were almost empty, the park in front of my house locked. My adoptive sister’s five-year-old son was in the garden, trying to play with the neighbour’s children across the hedge. Keeping children at home may well be the most difficult task of this lockdown. Schools will be closed until April 3rd, if not longer, and the complete lockdown itself is expected to last until March 25th. And we don’t want to scare them. I’m telling the little one we are all playing a game with his mates and teachers. The one who will stay home more than the others will win a prize the moment they go back to school. Meanwhile, we make them draw rainbows with the hashtag: #everythingwillbeallright and upload the photos to the school’s WhatsApp group.

I keep thinking of my grandmother, who survived the so-called Spanish Flu in 1918. She contracted but recovered, almost miraculously. In that bed she left, she used to tell me, half of her hair and all her fear. The hair grew back in no time, the fear was gone forever. But those were different times, without a lot of travel and no social media. They coped with epidemics differently than we do today. Or, maybe not. The sales of a book we consider a classic and study in school—the Decameron—have gone up. Written in 1350 by Giovanni Boccaccio, one of the fathers of Italian literature, is about a group of 10 friends who lock themselves up in a villa near Florence during an epidemic: they eat, drink and tell long stories to entertain each other for 10 days and 10 nights, until the emergency ends. Many people, especially in the most affected north, might have thought to do the same: because during this first weekend of complete lockdown, it was reported that people left Milan to go live in their holiday homes in other regions, some of them with worrying symptoms, disregarding the ban on unnecessary inter-city travel. And hereby, another myth is dispelled: that north Italians, unlike we southerners, have a strong sense of duty and follow rules and regulations. Naples and Rome have proved to be far more disciplined than Milan. We are not happy, of course, to be confined at home. But we are trying to cope.

I am fortunate to be part of a small circle of friends who check in on one another every day via video call. We make sure we dress well despite being home. If we are alone, we get together on a conference call, virtually sharing a glass of wine and some laughs. And we try and exercise. Every time we go out, we have to carry a form, downloaded from the Interior Ministry website, where we declare where we are going and why. Only trips to shop for food, medicines or to go to a workplace, are allowed. Shopping has become a bit of a nightmare, with a mandatory distance of one metre between customers, resulting in endless queues outside. In theory wearing a mask is not required unless you are sick, but they don’t let you in anywhere if your mouth is not covered. Masks are impossible to find, so women have taken to tying pretty chiffon scarves around their mouths. Pasta shelves at supermarkets are almost empty—call it the World War II syndrome if you will—and sales of flour went up by 82 per cent in the past few days. Delivery times for online grocery orders have gone up from 24 hours to four days. Because we have to cook for ourselves, we are rediscovering skills we had almost forgotten—making fresh homemade pasta, baking bread, biscuits, pizza. And while we are coming out on our balconies to toast each other with a glass of wine, I miss inviting people home, meeting friends.

Clandestine lovers who could not bear to stay apart have been spotted in the streets and fined by police—the fine could be as high as €206. For the young, love is stronger than the generic fear of an invisible virus, and death a distant thought, but they too, must cope with absence. Coping with a constant presence, though, is a totally different ballgame. People on the verge of divorce, still living together because they cannot afford the cost of one, are now stuck in the same space, often with children. The yelling I hear emanating from one of the apartments nearby tells me how difficult it must be. And there is no escape. You are still allowed to walk your dog in the street, but you cannot stop to chat with other people or do it with a friend. You can ride your bike but, again, alone. The sun shining outside suggests picnics and long walks but no, we cannot.

Loneliness, as much as the virus, is affecting the old. My mother lives in another town and I cannot go see her. Her caretaker has been instructed not to let anyone into the house—to protect her, of course. Churches are still open for ‘individual prayers’, but Mass is celebrated online. Weddings and funerals can of course still be conducted, but with a quick blessing from a priest if you want a religious ceremony, and without guests. A picture is making the rounds of social media: Pope Francis walking in Via del Corso, followed at a metre’s distance by his bodyguards. The photo of the year, they are calling it. Looking at the Pope actually walking free down a public street gives you the exact measure of how the virus has impacted our lives and how disciplined we have proved to be.

In any other moment, he would have been surrounded by a crowd.

Of Saints and Pandemics