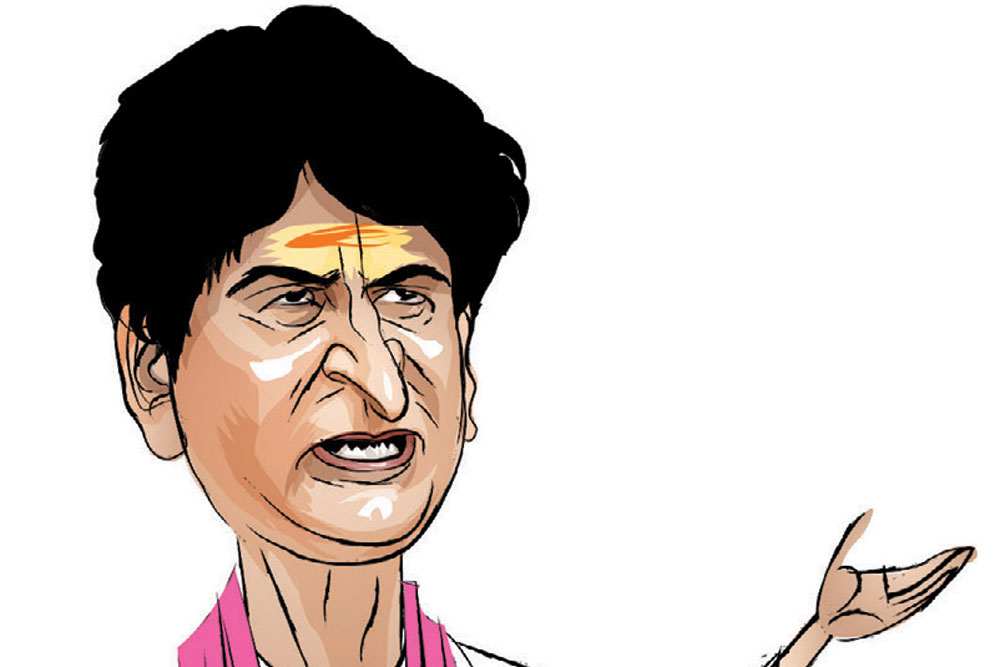 
Priyanka Gandhi has become active in Uttar Pradesh (UP) with election work. Her core team, led by Yusuf Ansari, is energetically driving the campaign. One plan of theirs is to make Priyanka visit the families of those who passed away during the Covid second wave allegedly because of inadequate healthcare. She is yet to clear the plan though. There were photos of Priyanka recently chancing upon and exchanging pleasantries with Samajwadi Party leader Akhilesh Yadav on a flight. But many say it was stage-managed. She also met Mayawati whose mother had passed away.

Home Minister Amit Shah is the chairman of a high-power committee finalising celebration events with respect to 75 years of Indian independence. It is set to gather pace with the Centre approving the calendar for the next 12 weeks. Five programmes have been planned every month, starting November 15th. Shah is said to have requested Prime Minister Narendra Modi to attend some of these in person.

Congress leader Salman Khurshid raked up a controversy by writing a book on Ayodhya that compares Hindutva to the Islamic State. The Bharatiya Janata Party (BJP) is capitalising on it to campaign in the UP election. They are portraying Congress as anti-Hindu. The first reaction of Congress was that it was Khurshid’s personal opinion. Later, some leaders asked what was wrong in his comparison. Others said the timing was wrong. Khurshid has lately been a dissident voicing his unhappiness at the functioning of Congress. The party is undecided about what to do with him. If they take action, he might quit and join another party like Trinamool Congress. If they support him, it could add fuel to the controversy and could cost Hindu votes in UP.

In Tamil Nadu, there is a scramble in the Dravida Munnetra Kazhagam (DMK) to watch the movie Jai Bhim in which actor Suriya portrays a lawyer trying to get justice for a tribal group wrongly framed by the police, and with one of them tortured and killed in custody. Chief Minister MK Stalin, though not known as a film buff, had taken time out to see it. He later sent a letter to the filmmakers in which he wrote that the movie brought back memories of the Emergency era. And especially of a friend who had died under police torture whom he had tried to save but failed. Chennai newspapers published the letter and soon DMK party members, from Members of Legislative Assembly (MLAs), district leaders to Members of Parliament (MPs), were lining up for Jai Bhim.

There are rumours that for the next Republic Day, there is an effort to make Bangladesh Prime Minister Sheikh Hasina the chief guest. The foreign ministry is keen, but it has not been finalised. The Indian diplomatic circle likes the idea for its importance after the attack on minorities in Bangladesh recently. In Bangladesh, one newspaper, not a pro-establishment one, carried the story with a lot of ifs and buts.

A Bangladesh delegation had come to Delhi and there was casual talk about the plan, but it was far from reaching any conclusion. Journalists in both countries are speculating whether this leak is a conspiracy to scuttle the move.

After the two Bihar Assembly bypolls in which their candidates lost their deposits, the Congress leadership might have to give up on the idea of not having allies in the state. Many of their leaders think they should go back to having a tie-up with the Rashtriya Janata Dal (RJD) and not bargain on the number of seats they get. Last time, Congress won just 19 of its 70 seats contested in the state election, and RJD leader Tejashwi Yadav had said that if his party had fought in more seats, it could have formed the government.

Although Pakistan boycotted the National Security Advisors’ (NSAs) meeting in Delhi recently on the Afghanistan issue, it eventually okayed India’s humanitarian help for the new Kabul government. As a result, India is sending wheat to the Afghan people. After that, ahead of Gurpurab, the Kartarpur Sahib corridor was opened to allow Indian pilgrims visit the Sikh shrine in Pakistan.

This would not be possible if some talks between India and Pakistan were not happening. If there is no track two diplomacy, then who are the invisible negotiators? It could be military channels, retired army officials on both sides doing it under the canopy of the NSA.

The Central Finger Print Bureau is under the home ministry. For a long time, they have been demanding funds for modernisation but not getting them. Now, ₹ 15 crore has finally been allotted. Of India’s population of 130 crore, about one crore fingerprints are there with the bureau. They want to tap into the Aadhaar database to get access to all those fingerprints, but privacy-related objections and litigation have stalled the plan.