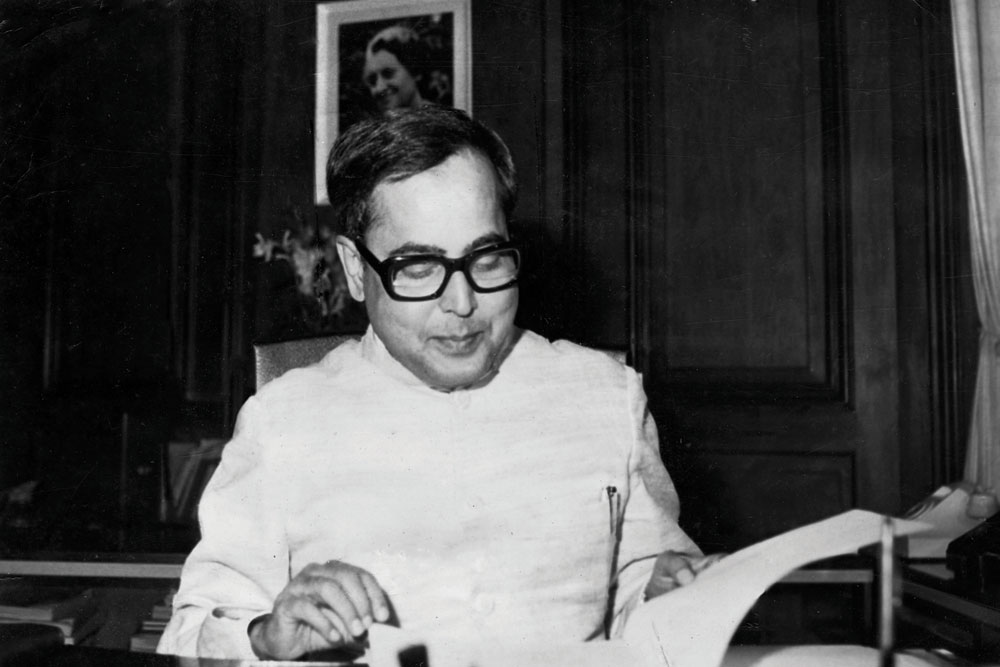 
Despite holding the highest office in the land for five years (2012 to 2017), the 84-year-old Pranab Mukherjee may not have died with a sense of complete fulfilment. A joke attributed to him was that while prime ministers came and went, his initials made him ‘PM’ for life. The witticism may have concealed a certain wistful yearning.

However convoluted his politics may have been—with some party colleagues being treated more like adversaries—he could be a loyal friend. I was always welcome to borrow from the extensive library in his house in Delhi’s Greater Kailash II where books on subjects that ranged from biography to economics and philosophy to history indicated intellectual interests that set Mukherjee apart from most others in Delhi’s corridors of power. Thanks to his painter wife, Suvra, who predeceased him by several years, I have also enjoyed many informal en famille dinners in that house.

He readily wrote a very warm and committed foreword for my book, Looking East to Look West: Lee Kuan Yew’s Mission India. The theme chimed in with his own declaration when an Asia-Europe mechanism threatened to exclude India that “Asia minus India is like Hamlet without the Prince of Denmark.” Singapore’s Lee called him “a very able fellow”, adding, “I’m impressed by his intellect.”

Mukherjee told me once that he had a letter from Indira Gandhi authorising him to preside over Cabinet meetings in her absence. He set such store by those written instructions that I did not have the heart to remind him of a cartoon by (I think) my former colleague Sudhir Dar that showed her measuring Devaraj Urs’ height, while the man responsible for her political comeback from Chikmagalur in the historic October 1978 by-election pleaded, “I haven’t grown. Honestly, I haven’t!” or words to that effect. Clearly, Indira Gandhi thought otherwise. Ruthless strategist that she was, she soon jettisoned the Karnataka Chief Minister to whom she owed so much.

Indira Gandhi would never have written that letter about Cabinet meetings if she had remotely feared a challenge. But lacking a mass base and despite reports of lavish campaign spending, Mukherjee was not elected to the Lok Sabha until 2004.

She recognised his intellectual calibre, executive competence and parliamentary finesse. He was not just utterly loyal to her politically. His devotion bordering on servility (to Sanjay too until his death) was strongly laced with personal adulation and affection. As Mukherjee himself recounted, while Rajiv Gandhi remained “exceptionally calm and displayed total control and fortitude” when he heard of his mother’s assassination, “tears started rolling down” his face, and he “wept inconsolably.” He could “compose” himself “only after some time and with great effort.”

Interestingly, he also acknowledged that Rajiv’s stoicism was “possibly a trait he had inherited from his mother.” It was the English stiff upper lip, a quality that is little known in Indian life. The two very different responses to the tragedy highlight the cultural differences between the two Indias. It might thereby also help to explain why the multitude feels closer today to a Bharatiya Janata Party that subscribes so ostentatiously to folk beliefs and customs than to a Congress committed to a distant Fabianism that hardly any Indian has heard of and headed by an Italian-born woman and her visibly cosmopolitan son and daughter.

Mukherjee’s cordial response to Mohan Bhagwat’s invitation to address the Rashtriya Swayamsevak Sangh (RSS) in Nagpur may have been an acute political operator’s recognition of that grassroots reality.

Rajiv’s world has been derided as ‘the babalog’, the ‘safari-suited brigade’ and the ‘Beatles generation’. They were an upper-class English-speaking Westernised milieu that was instinctively more restrained in its behaviour than the emotionalism of traditional India. It was a different universe altogether from that of the lower middle-class Bengali family in rustic Birbhum to which Mukherjee belonged. He started life as an upper-division clerk in the office of the deputy accountant-general (Post and Telegraph) in Kolkata.

That difference was again evident when I asked him about Indira Gandhi’s relations with Lee Kuan Yew. “Not at all good!” he replied at once, completely out of his depth with the banter and badinage that marked the ‘people like us’ syndrome of the world’s small and exclusive English-educated elite. Despite their political differences, the two prime ministers understood each other perfectly at the human level. Mukherjee was excluded from that rapport.

We will never know for certain what exactly passed between him and Rajiv during those moments when India was poised on the razor’s edge of dangerous uncertainty. The laconic ‘He let others influence him and listened to their calumnies against me’ in one volume of Mukherjee’s memoirs conceals more than it reveals. So does the probably colossal understatement, ‘I let my frustration overtake my patience.’

HE MAY HAVE mentioned Indira Gandhi’s letter and tried to assert the ‘right’ he mistakenly felt it conferred on him. Being well-versed in the intricacies of protocol and precedent, he may also have staked a claim to head an interim government, as Gulzarilal Lal Nanda had done after the deaths of both Jawaharlal Nehru and Lal Bahadur Shastri. Whatever it was, it accounted for the political exile that continued till 1989 when a reconciliation of sorts was patched up. But it was not until 1995 that PV Narasimha Rao, another shrewd judge of men, brought Mukherjee into the fold and made him external affairs minister.


Asked many years later about the foreign affairs legacy he wanted to leave behind, Mukherjee replied, “As the foreign minister who prepared Indian diplomacy to address the challenges of a more globalised, interdependent and uncertain world.” He skilfully pushed through the historic 123 Agreement and treaty with the Nuclear Suppliers Group. Historians may well judge that his eloquently convincing parliamentary defence of both saved Manmohan Singh’s UPA II.

However, it would be a mistake to conclude from that defence that he was especially fond of Sonia Gandhi’s choice of Prime Minister. He was loyal to the party which he had abandoned in despair and disappointment to set up the short-lived Rashtriya Samajwadi Congress but to which he had returned in 1989, recognising that there could be no other vehicle in India for secular, caring, middle-of-the-road governance to deliver both personal ambition and desirable public goals.

Although the son of a dyed-in-the-wool Congressman, it was concern for Bengal, which the Congress seemed to neglect in those days, that influenced his political initiation in the venerable Ajoy Mukherjee’s Bangla Congress. That same concern prompted him to write a long letter to The Statesman comparing and contrasting New Delhi’s lavish generosity to West Pakistani refugees with its niggardly treatment of those in the East. The paper published it in full.

His stint as India’s 13th President provided surprisingly few controversies. There was none of the stormy distractions triggered by personal animus during Zail Singh’s tenure. Nor does it seem to have been marked by any of the philosophical dissonances of Nehru’s relationship with Rajendra Prasad

Juggling with figures remained the first love of this one-time economics teacher in an obscure Bengali college who became India’s youngest finance minister. Adjudged among the world’s best finance ministers by the journal, Euromoney, he freed India from the shackles of the so-called Hindu rate of growth to achieve 5.6 per cent growth. Not for nothing did a leftist magazine comment then that socialism did not grow out of the pipe Mukherjee smoked. Operation Forward, which he and then Industries Minister Charanjit Chanana launched in the early 1980s, started the liberalisation process that eventually led to the revolution under Narasimha Rao and Manmohan Singh.

He negotiated the biggest-ever loan that the International Monetary Fund (IMF) had ever granted any country. His crowning glory was being able to return its third tranche unused because India’s economy had moved forward. Lee Kuan Yew was not the only global statesman to be impressed by his fiscal management; so was the US Treasury Secretary, Donald Regan, who is regarded as the real author of ‘Reaganomics’ and tax cuts as a means of creating jobs and stimulating production.

His stint as India’s 13th President provided surprisingly few controversies. There was none of the stormy distractions triggered by personal animus during Zail Singh’s tenure. Nor—surprisingly—does it seem to have been marked by any of the philosophical dissonances of Jawaharlal Nehru’s relationship with Rajendra Prasad. In theory, the elaborate Ram Mandir bhoomipuja could have burgeoned into another Somnath temple controversy if it had been in his time. But only in theory. Pranab Mukherjee is unlikely to have allowed ideology to disturb pragmatism. Whether for reasons of constitutional propriety or personal convenience, he remained the Man for All Seasons to the end.

When Boris Comes to Bharat

Letter from a Desolate London