Ukraine and neutrality in Europe 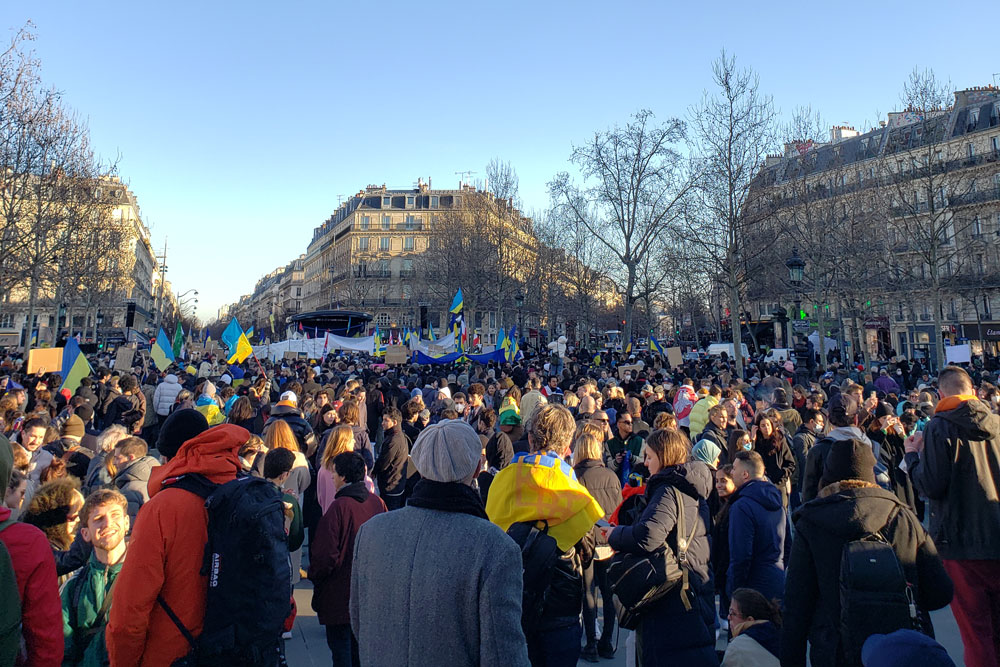 A protest rally in Paris against the Russian invasion of Ukraine


Prior to the Russian invasion of Ukraine in February 2022, the question of NATO membership in Finland and Sweden was scarcely a matter of political discourse. But in response to the Russian action, both the Nordic countries reassessed their security situation and considered that the European Union (EU) was insufficiently strong for territorial defence against possible Russian expansionism.

The two countries had pursued different security policies before, during and after World War II. After its initial rebuff of the Soviet Union in 1939, Finland allied with Germany and suffered defeat in 1945. The Soviet Union obliged Finland to accept a treaty of friendship, and surrender about 20 per cent of its land area, including Vyborg, its second-largest city then. Adherence to the arrangement was ensured by the Allied Control Commission, but when the Soviet Union dissolved in 1991, Finland was free to join the EU, which it did along with Sweden in 1995.

Joining the EU did not mean abandoning a nation’s policy of neutrality and did not ipso facto inspire in Finland any domestic debate about joining NATO. The EU’s Lisbon Treaty of 2009 had provided for common security and defence and an operational capacity drawing on civilian and military assets of member states to use them on missions outside the Union for peacekeeping, conflict prevention and strengthening international security. If any member was a victim of armed aggression, the others would have an obligation of assistance and common defence would be subject to unanimous decisions by heads of government. In Finland, these provisions were not regarded as explicit as Article 5 of the NATO Charter, and it felt that only through NATO membership, and the formal backing of the US and UK, could its security be ensured.

Much the same sentiments prevailed in Sweden. Since the Napoleonic wars, Sweden had maintained neutrality and during World War II, it remained “non-belligerent”. But after the war, it negotiated with Denmark and Norway to form a defence union. But because Norway wanted to join NATO, and Sweden did not want to antagonise the Soviet Union, the three countries failed to reach an agreement. For six centuries until 1809, Finland had been part of Sweden; and then Finland became a province of the Russian empire until the Russian Revolution of 1917 when Finland gained its independence. Sweden’s fear of making the Finnish situation more precarious was the main consideration for its neutrality during the Cold War period.

Sweden and Finland will bring substantial military assets to NATO’s northern Europe architecture; Finland has a large army, and Sweden, substantial air and naval forces, and both countries, like Ukraine, have already been conducting regular training exercises with NATO countries. Sweden has cooperated with NATO and EU defence policies, and the Finnish, Swedish and Norwegian air forces have trained together. Nevertheless, by applying for NATO membership, Finland and Sweden propose formally to abandon their political and military neutrality.

The Finnish decision effectively means that NATO’s borders with Russia would extend by a massive 1,300 kilometres and add to Moscow’s justifiable anxieties about its security. A glance at a map of eastern Europe will demonstrate that Russian claims to be surrounded by hostile elements on its western approaches will be fully justified and the Baltic turned into a NATO lake. Until now, the Kremlin’s reaction to the Swedish and Finnish actions has been muted, though the Russian electricity supply to Finland, about 10 per cent of Finnish consumption, has been terminated.

Whereas Finland does not exclude NATO from stationing forces on its territory, Sweden’s application does. Denmark, which had opted out of the EU’s defence policy, has held a referendum two weeks after Finland and Sweden applied to join NATO, which returned a 67 per cent vote in favour of an adjustment to allow foreign troops to train on its soil. Norway still has a ban on housing nuclear weapons on its territory. France has long felt that the US subordinates the NATO to its own strategic interests, and obstructs the emergence of any realistic European defence arrangements. Nevertheless, France participated in NATO operations in Kosovo and Afghanistan though it insists on its own autonomous decision-making authority, especially in regard to nuclear power. These examples show that there are variations in membership obligations in NATO.

After approval by NATO’s bureaucracy, the two new applications require confirmation by all 30 members and this could take a year or more. While promising a “fast track”, Finland and Sweden have meanwhile American and British guarantees that the two countries will come to their aid when needed. The main opposition to the two applications is Turkey, which accuses them of providing sympathy and succour to the Kurdistan Workers’ Party (PKK). An additional grievance is that Sweden has imposed arms sanctions against Turkey. Both Nordic countries are trying to reassure Turkey and as a blatant sweetener, they also add their interest in purchasing Turkey’s drones, which are believed to have performed well in the hands of Ukraine and Azerbaijan’s military.

Formal neutrality, guaranteed by Russia, the EU and US could be Ukraine’s way out of the present impasse in its war with Russia. Three countries in Europe continue to adhere to their past policy of neutrality. In 1955, Austria achieved independence, guaranteed by the Soviet Union, France, the US and UK by enshrining a perpetual neutrality clause in its constitution. Its membership of the EU could be a precedent for Ukraine which, despite its impoverished situation, is already negotiating accession with Brussels, sympathetic for reasons of solidarity.

Switzerland’s neutrality is of a different order. Based on the 1907 Hague Convention, there should be “no participation in wars; international cooperation but no membership in any military alliance; no provision of troops or weapons to warring parties; no granting of transition rights.” Switzerland is a member of the United Nations, though the Swiss voted in a national referendum against joining the UN Security Council. It has also never joined the EU.

Ireland’s neutrality, though like Austria, a member of the EU, is also significant. The 1922 constitution of the Irish Free State stated, “Save in the case of actual invasion, the Irish Free State shall not be committed to active participation in any war without the assent of the Oireachtas (parliament).” On January 25, 2022, the Irish prime minister declared: “We’re not politically neutral but we’re militarily neutral.”

Nehru drew a distinction between neutrality and non-alignment, and the Irish position is not far distant from India’s. The advantage of non-partisan status is that it confers an edge in mediation and reconciliation, as amply indicated during Nehru’s premiership with respect to Korea, Indo-China and the Suez. The legacies left by Sweden’s Count Folke Bernadotte who negotiated the release of about 31,000 prisoners from German concentration camps, and Finland’s Martti Ahtisaari, who won the Nobel Peace Prize for mediating in conflicts across Serbia, Aceh, Iraq, Namibia and Iraq, will now have to be assumed by statesmen from other countries.