A handicap and an incentive for the American president 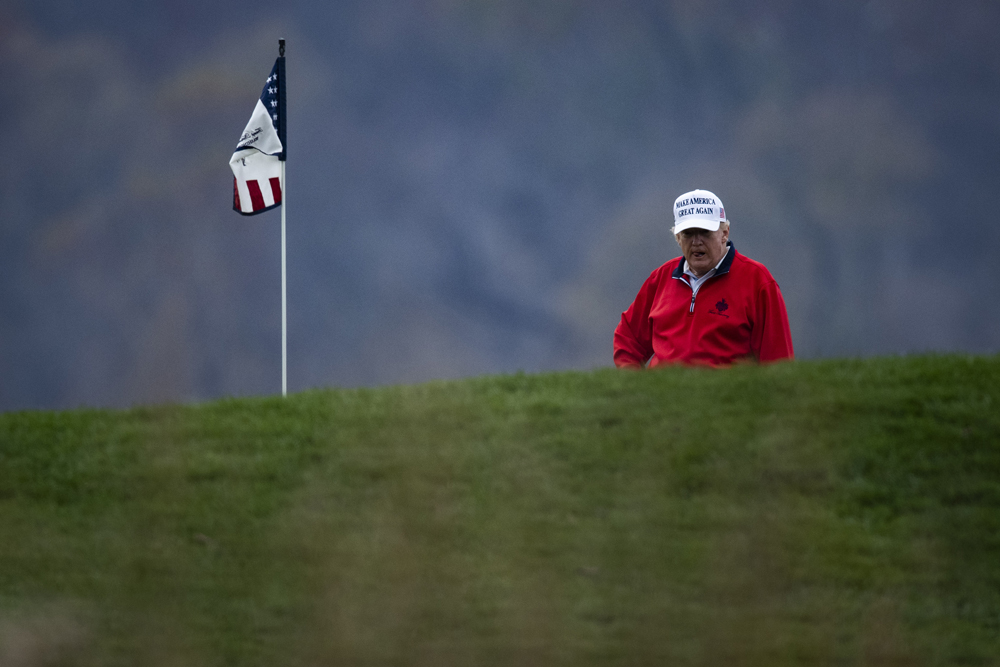 
On the day the media announced that Joe Biden had won the 2020 election, Donald Trump went to a golf club in Virginia and played golf for the rest of the day. He would have done better if he had spent the time drafting his concession speech as the whole world would have celebrated the liberation. But then golfers are golfers and, as an avid golfer, he did what he liked best, golfing and tweeting in between. Golf is the slowest sport in the world, which provides time for tweets or even conversations between shots or when the other player is in the woods searching for his golf ball. As president, he must be exempt from the prohibition on mobile phones on golf courses as he has to be constantly available for the strategic forces to operate the nuclear button, if necessary.

Trump played around with human lives even after he knew he had lost, when he walked out of a G-20 virtual summit on November 21st called specifically to work out a strategy to combat Covid-19 around the world, including the US, which was heading the list of the worst coronavirus ravaged nations in the world. He made an appearance just to convince the world that he was still president, but began tweeting about how Biden was still trying to steal his election. Biden, who is dying to take over the fight against coronavirus, would have been happy to participate and contribute to the discussion. In fact, if Trump had followed the good traditions of golf, he could have asked Biden to wrestle with Covid-19, while he himself “hit a very small ball into an even smaller hole, with weapons singularly ill-designed for the purpose,” as Winston Churchill defined the game.

Donald Trump is a single-digit handicap, he has been called a cheater, he has had his golf scores hacked, he plays too much and his company owns many golf courses, including in the US, Scotland, Ireland and the UAE. Trump is also known to enjoy the company of famous people and that extends to the golf course, where he has played rounds with Tiger Woods, Dustin Johnson, Lexi Thompson, Jack Nicklaus and John Daly. They may have allowed him to win by correcting their scores!

Trump claims to have the lowest handicap among presidents, though the reliability of such claims is in question because of his record of lies. Trump spent 266 days playing golf, spending an estimated $142,000,000 of taxpayers’ money on travel and stay for himself and his massive entourage, according to a website, Trump Golf Count. He also spent $50,000 of his own money to upgrade the golf simulator inside the personal quarters at the White House.

US presidential golf trivia is fascinating. Sixteen of the last 19 US presidents played golf, though all of them were not uniformly addicted or good. The list goes back to William Howard Taft, who was president from 1909 to 1913. President Taft wrote, ‘I know that there is nothing more democratic than golf. There is nothing which furnishes a greater test of character and self-restraint, nothing which puts one more on an equality with one’s fellows, or, I may say, puts one lower than one’s fellows, than the game of golf.’

It was estimated that Woodrow Wilson played more than 1,000 rounds of golf during his eight years in office. Roosevelt played golf till he contracted polio at the age of 39. He left a legacy with the federal funding of public works projects, which included dozens of municipal golf courses like Bethpage State Park in New York and FDR Golf Club in Philadelphia. Dwight D Eisenhower, named Golfweek’s Golfer of the Century in 2000, was famously a member of Augusta National Golf Club in Augusta, Georgia.

It is estimated that he played more than 800 rounds. While his handicap never reached single-digits, he did team with Arnold Palmer, a frequent playing partner, to win a charity event in 1964.

John F Kennedy played enough to be a single-digit handicapper. Earlier in life, Kennedy was a member of the Harvard golf team. Before JFK became president, he once nearly got a hole-in-one at the16th at Cypress Point, his 5-iron shot hitting the flagstick and ending up inches from the hole. Faced with continued questions about where exactly the president was all day, JFK’s press secretary clarified that he was hitting the links. This public announcement of Kennedy’s golf habit gave him a good alibi, at least for a time.

Lyndon B Johnson used golf rounds to sway senators into voting for the Civil Rights Act of 1964. Johnson knew by playing golf with political friends, he would get four hours of uninterrupted time with them to strengthen, or sway, their opinions. Richard Nixon is believed to have played to a 12-handicap, even breaking 80 on an occasion. Arnold Palmer had several interactions with Nixon and he said once: “I liked Richard Nixon despite his quirks and apparent lack of warmth. I think his decision to abandon golf for political purposes revealed something fundamental about the dark side of his character, or maybe his deep social insecurities, that Mr Nixon never permitted himself to examine.”

Gerald Ford regularly played a round of 18 holes for less than 90 strokes. Ford was the first president to join the US Golf Association and was honorary chairman of the first Presidents Cup in 1994. After he pardoned Richard Nixon, the first thing he did was go to the opening of the World Golf Hall of Fame and play a round with Jack Nicklaus, Arnold Palmer and Gary Player. Reagan was not an avid golfer, though some say he had a good swing and could break triple-digits. George Bush, with a handicap of 11, was known for being a fast player.

I had the privilege of playing golf at the Army Navy Country Club in Washington at the same time as Bill Clinton. But when I saw him two holes ahead, I thought it safe to leave as he was often in my striking distance and many gunmen were at hand. But when I was leaving, one of his armed guards drove up to me in a golf cart and said that the president would not like to disturb others and I could continue. But that was an occasion when I believed in the dictum that discretion is the better part of valour. Clinton was left-handed but played golf with right-handed clubs, as he explained to me while showing off his clubs at the White House. Like other golfers, he used to wax eloquent on the shortest putts he missed.

Barack Obama was criticised for playing too much golf; he teed it up every 9.5 days. But a lot of the criticism came from Trump who plays golf reportedly every 6.3 days. Like some of the other presidents, Obama played with balls marked ‘POTUS’.

Given the fact that golf has played a role in presidential history in various ways, the ultimate, irresistible temptation, which may be offered to Trump after he concedes defeat is that he can play unlimited golf at state expense in the best golf courses around the world from the day he makes his acceptance speech to the inauguration day. That may be an expensive bargain, but not too much to end the pandemonium in the US and to save lives by controlling the pandemic.