The Tragedy of Boris Johnson

When politics becomes a study of character 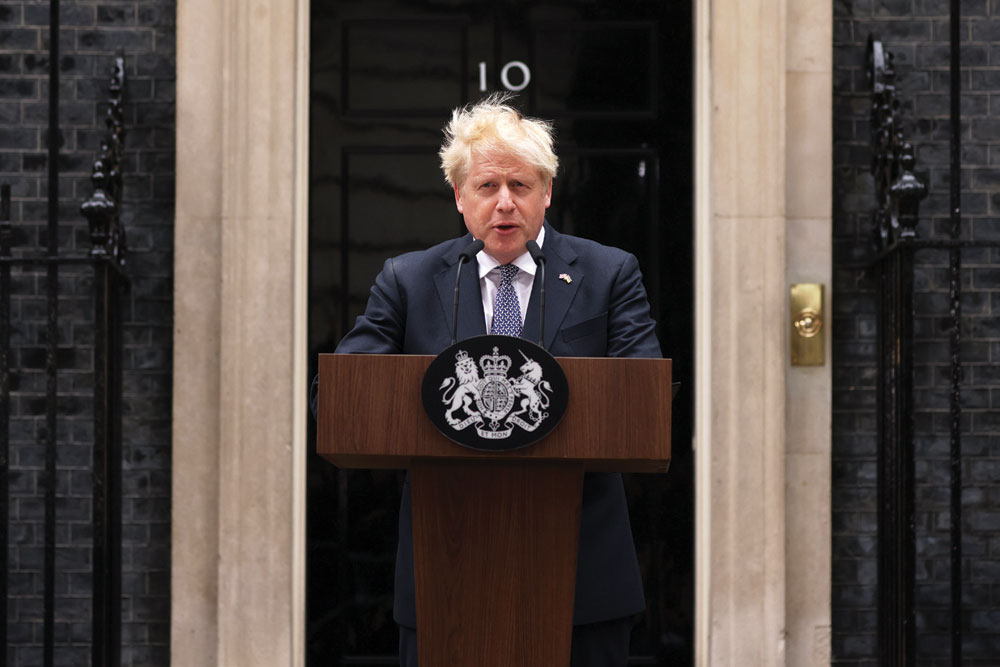 
Amidst the chaos, we tend to return to the lost loftiness of politics. There is nothing loftier in British political thoughts than Peter Hennessy’s “good chap theory of government”, which I think is the modern-day English alternative to the Confucian model of enlightened men in power. In the kingdom with­out a constitution—Britain relies on loosely codified conventions and prec­edents—it’s assumed that individuals with character—the good chaps—will be presiding over national destiny. Pundits have been mourning the demise of the good chap in power since Brexit and the subsequent mess in the Conservative Party. Brexit was Boris Johnson’s moment, but he was felled by his closest ideological partner’s warped morality minutes before his ascension. He waited, and as the come­back leader of the Conservatives, led his party to a massive victory, further cementing the truth that he remained Britain’s most popular politician. Johnson as prime minister refused to be the good chap. He was the chaotic chap who preferred the storm to the calm. In the end, the Johnson legend of the infallible rule-breaker was wrecked by the furies he had unleashed.

What his colleagues failed to achieve—the metaphorical Johnson head on Trafalgar Square—the virus did. Biologically, he survived the coro­navirus as one of its first high-profile hosts. Politically, it triggered the inter­cellular collapse of his government. He protested till the end, invoking popular mandate even as parliamen­tary support drained under his feet. The so-called Partygate—Downing Street soirees during the lockdown while the rest of Britain could not take a walk in the park—was the first char­acter failure: a prime minister who not only broke the law but also lied about it. The mea culpa came too late to satisfy his critics who wanted noth­ing less than the resignation of the prime minister who could get away with what others think were trans­gressions but he considers routine er­rors of judgment. The confidence vote by Conservative MPs had the making of a parliamentary coup. He survived that too, and truly believed that there would be no leadership challenge at least for a year—that’s what the party rules ensured. The bravado of a man on the brink dancing to his inner tune of political immortality was a sight to behold. The ‘performance’ did not slow down even as the Death Eaters— quite a few of these erstwhile loyalists owed their career to his generosity— closed in. The Johnsonian brazenness remained intact.

Then came along Pinchergate. Chris Pincher, the deputy chief whip, and reportedly a serial sexual offender, resigned after two men accused him of groping them at a posh private club frequented by Conservatives in central London after a boozy evening. Johnson’s reported crime was that it took him 24 hours to make up his mind on the fate of Pincher. In the hoary tradition of Sleaze and the Conservative, Pincher is a footnote, though, in the sudden moral make-be­lieve of London, a few hours of delay in resignation amount to a crime in which the bigger guilty is the prime minister, whose private life itself would not be held as exemplary by the Church of England. John Profumo, the disgraced war secretary in the Harold Macmillan government, set the standard, and since his affair with Christine Keeler, British politics has withstood varying degrees of Con­servative libido soiling the political establishment. The twisted morality of turning Pincher’s sexual advance into Johnson’s crime is only the latest in the many English manifestations of Character Is Destiny.

All the good old loyalists waited for his weakest moment to strike, and, after being partners in his multiple immoralities, to display their sud­denly discovered conscience and com­mitment to serious governance. The final push came with the resignations of Chancellor of the Exchequer Rishi Sunak and Secretary of Health Sajid Javid, and within 48 hours, almost 50 cabinet members left the ship the captain alone thought would survive the iceberg of rebellion. Thursday noon, in front of 10 Downing Street, Johnson was a picture of pathos but not of repentance while announcing his departure from “the best job in the world”. He intends to continue as caretaker till a new Conservative leader is elected. It was the end of a thriller most enjoyed by himself, and it was always played out beyond the conventions of politics as usual. It was the story of the disruptor swept aside by the disruption.

When politics becomes a compara­tive study of character, the jury is not the people but convenient moralists who have always grudged the rise of a man who had played the comic and the classicist, the charlatan and the Churchill, with effortless panache. As Etonian-Oxbridge toff, rightwing editor and columnist, rockstar Conservative mayor of a genetically leftist London, chief campaigner of Brexit, and as prime minister, Johnson remained an original—and the most successful Conservative in the arena after Mrs Thatcher. Even as the sun was setting on his government, and the domestic moralists were compet­ing to be Boris’ Brutus, he played the international moralist to perfection, straying from the rightwing apologia for Putin’s fascism. He was one of Ukraine’s staunchest defenders in the West, and Zelensky’s first global guest. All the while, the good chap was elsewhere, and the moralists had already their verdict written on the casual buccaneer. He thought he was the peacetime Churchill minus the cigar. He was missing the big picture of Brexit and fumbling through carelessness and smaller crimes of suspended judgment. Conservatism’s putative redeemer allowed himself to be the one standing between a squan­dered mandate and a future project of ideological restoration.

The virtuous lot in British politics and media are still baying for the blood of the fallen. “With Boris it isn’t over until it’s over. It’s now up to his party to see to that. Not until there’s a stake through his heart can we be sure he’s gone,” writes one of them in the Times because Boris has not yet offered his resignation to the queen. Virtue-signalling has become the easy sport of the Conservatives who are still standing, and by reducing their damaged moral system to the size of an isolated Johnson, they seem to have forgotten why they are here at all. Are they the last peddlers of platitudes or the unworthy keepers of the Brexit mandate? It’s all about the end of Johnson, not about regaining the Conservative spirit with the ruthless singlemindedness of a Thatcher—or with the suave flexibility of a Blair who invented New Labour. Johnson could have been history’s chosen conservative. Tragically, he has opted to be a passer-by.