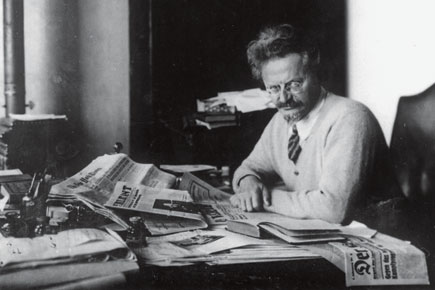 
India has experience of hosting political refugees—from His Holiness the 14th Dalai Lama of Tibet to Taslima Nasrin of Bangladesh. Each in their own way have proved inconvenient, mainly due to ambiguity of this status in international law. Hardly had Leon Trotsky, exiled from the Soviet Union, been accorded refugee status in France than the Paris authorities resolved to find a pretext to expel him.  Trotsky was the highest profile political refugee in France during the inter-war years. The inconsistent manner in which the French authorities managed his two-year stay is revealing; in 1932, they refused him entry, the next year they allowed him in. They issued an expulsion order in 1934 that could be implemented only one year later, in 1935. This was a tug of war in which Trotsky was pulled between the dictates of Franco-Soviet rapprochement and the French self-declared ethos as a safe haven for asylum seekers.

During the Great War, France had expelled Trotsky in 1916 for subversive activity. In 1932, Trotsky was stripped of Soviet nationality and from exile in Turkey, he applied for residence in France to which the Paris foreign ministry said “it is inopportune when we have just concluded a non-aggression pact and commercial agreement with the USSR… negotiations are delicate and should not be disturbed.” Trotsky then requested a visa to allow him to visit a health cure at Vichy which Paris also refused on the grounds that the decree of 1916 was still valid. But later that year, France granted Trotsky a transit visa to travel under his wife’s maiden name, Sedov, to lecture at Denmark and also allowed Trotsky’s son Lev to travel to France to meet his father. Trotsky hoped to remain in Denmark but had to return to Turkey after eight days. In 1933, France allowed Trotsky to come for a health cure at his own risk because of threats from French Communists and White Russians. Trotsky insisted on his incognito in the name of Sedov and arrived secretly in July.

The accession of Hitler, Japanese expansionism in Manchuria, the failure of the disarmament conference in Geneva, the withdrawal of Germany from the League of Nations in 1933 and French rapprochement with the Soviet Union was the international context in which Paris made decisions about Trotsky. From the Soviet side, there was anxiety to advance the rapprochement and in France, there were pauses due to unstable domestic politics. The French were aware of Stalin’s hatred of Trotsky, so in the circumstances, it is hard to explain how Trotsky was at all permitted to come to France.

The momentous event in the months between the refusal and grant of Trotsky’s asylum was the assumption in office of the Nazis in Germany in January 1933, one consequence being the flood of German refugees to France after the persecution of Jews and mass arrests of Hitler’s opponents. The French had to formulate a policy and the logic was, if granted to one category of refugee, asylum ought to be extended to all, regardless of origin and political orientation. The dilemma was whether the demands of foreign policy should overrule this principle.

Trotsky’s relations with the Turks were cordial; when he had been Red Army Commissar, he supplied them with arms against the Greeks. It is possible that Moscow pressed Ankara to remove him. Trotsky’s first choice for asylum was Germany, but France was also considered because Trotsky spoke French and knew Paris from previous stays in France. He would also be near his son Lev, who had moved to Paris in March 1933. Norway, Sweden, the Czechs, Germany, Britain, Netherlands, Austria, Denmark and Luxembourg refused him a visa, but a French visa was organised by Maurice Parijanine, French translator of Trotsky’s books, backed by a petition by such luminaries as Romain Rolland, Georges Duhamel, Charles Vildrac, Jean Richard Bloch and Leon Werth.

A Franco-Soviet non-aggression pact was ratified in February 1933, so Trotsky considered the granting of the French visa a lucky surprise because he made no secret of his scorn for most French politicians. The most plausible explanation for the French visa is that Stalin consented to Trotsky’s move, expecting that surveillance of Trotsky’s activities by the Soviet secret police in France would provide evidence of his plotting against Stalin because Trotsky’s incognito was known to the French Communist Party and the Soviet Embassy. Trotsky lived for three months in Southwest France in Charente, but hardly incognito; Paul-Henri Spaak, Fenner Brockway and Andre Malraux visited him there. Allegedly because of good behaviour, Paris agreed to Trotsky’s request to move to Barbizon, 50 kms from Paris, though a more likely interpretation is that, with Soviet connivance, it would be easier to entrap him if he was nearer Paris. In April 1934, the police arrested Trotsky’s secretary for a traffic violation, the outcome of which was that Trotsky’s incognito was leaked to the press. This triggered uproar in the press, and led to the revocation of the residence permit and an expulsion order to be executed within 15 days.

Trotsky assumed that when the local police discovered who he was, they informed the press because they were piqued at not having been kept informed. The right-wing press then created a storm and headlines such as ‘Throw Trotsky Out’, ‘Trotsky’s Presence is Intolerable’ and ‘Trotsky Must Immediately be Expelled’ appeared, but their influence on the decision is doubtful. Rather than Paris bowing to media pressure, the government probably used the press to justify the decision. In fact, during his time at Barbizon, Trotsky frequently went to Paris. He shaved his goatee beard and shielding his face, evaded police surveillance. The definition of interference in the politics of the host country, then as now, is open to several interpretations. The police listed Trotsky’s misdemeanours as instigating dissident communists, setting up a Communist League that was a Trotskyite party of Bolshevik-Leninists, establishing a secretariat in Paris, and publishing the League’s newspaper La Vérité. The League attempted, unsuccessfully, to influence a move to the left by the French Socialist Party. The French anti-communist right wing did not consider Trotsky’s presence an asset; sheltering Stalin’s enemy could have been used to undermine the rapprochement with the Soviet Union but the right did not distinguish between the Comintern and Trotsky, defining both as communists. French colonialism was another factor in Trotsky’s expulsion because Trotskyists had intervened in the affairs of Indochina to agitate the peasantry and disrupt the colonial economy, reason enough for Paris to expel Trotsky.

The police were not able to execute the expulsion order for 15 months because Trotsky could not find asylum elsewhere. Turkey, Britain and Ireland specifically refused though the UK’s Foreign Office declared ‘Mr Trotsky’s affairs are no longer of any real political importance.’ Meanwhile, the French government ignored pleas by the left-wing press and a committee set up by Malraux to rescind the expulsion decree. Romain Rolland said the refusal of asylum to Trotsky would rank as eternal opprobrium for French democracy, his argument being that Trotsky had the same right as granted to White Russians, German communists and King Alfonso XIII of Spain. But the government was unmoved, though it did not intern Trotsky or exile him to one of the French colonies before his departure. It sent him instead to the French Alps near Grenoble, where he wrote Wither France to outline a programme for a new French revolution that encouraged the proletariat, peasantry, army, women and youth to overthrow the bourgeoisie, published in La Vérité but unsigned so as not to incriminate himself. In December 1934, Stalin accused Trotsky of organising the assassination of Bolshevik revolutionary Sergei Kirov and asked for Trotsky’s extradition to stand trial but there is no evidence of any undue pressure by Stalin on France for this. But Trotsky’s situation in France had become so precarious that plans were made for him to travel with forged documents to hide in Belgium or Holland. This turned out as unnecessary because a sympathetic Norwegian Labour government took office in March 1935 and Law Minister Trygve Lie, the future first UN secretary-general, extended a visa. Trotsky ungratefully wrote in his diary that Norway was not France: an unfamiliar language, a small country, off the beaten track, delayed mail, but it was better than Madagascar. Distant Mexico was to be Trotsky’s final refuge, where the Bolshevist apostate was murdered by a Stalinist agent in 1940.

Despite its inconsistencies, France abided by the League of Nations decision that urged governments not to expel refugees until they obtained residence in another country. To put Trotsky’s case in context, France in this period had graver preoccupations; recession, unemployment, reparations, debt repayments, disarmament, Nazi accession to power, the Stavisky financial scandal, the far-right instigated riots of February 1934 and political instability. Trotsky was just a minor and unwelcome footnote in French history.

Surrealists and Communists in Paris