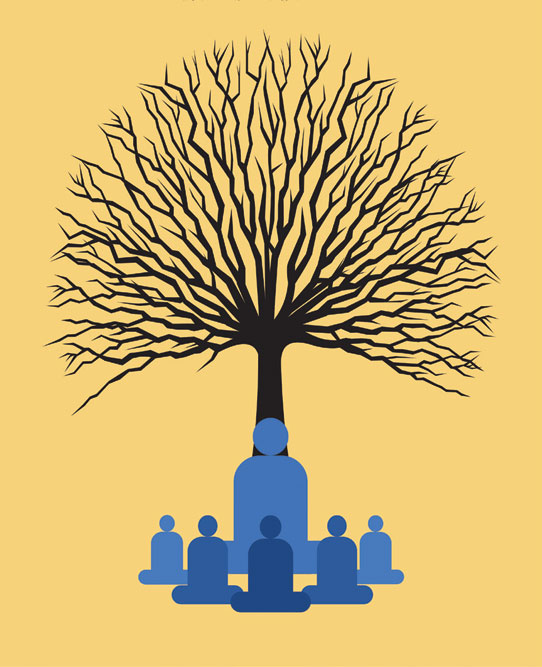 
Student: Our subject is Swaraj and the occasion is India@75, Azadi ka Amrit Mahotsav. Shall we continue our Svaraj Samvad?

Teacher: I like this idea of a Svaraj Samvad. I am glad to have this conversation with you.

Teacher: I’m so glad you ask such direct questions.

Student: If we cannot be honest with one another, such a dialogue would be pointless.

Teacher: That is what I like about the younger generation. They can’t abide flakiness. They suss out hypocrisy so quickly too. The whole purpose is to have a samvad, to speak together, to try to understand one another, to progress together toward a common understanding. Samvad is a very old word, going back to the Rig Veda itself. It does mean speaking together, having a conversation or colloquy, with the aim of discovering the right view.

Student: So, it’s a sort of appointment with the truth.

Teacher: Well put. The Upanishads, the Bhagavad Gita, and the tantras are all conversations. But the use of the dialogic method to uncover, even discover, knowledge goes way back in our traditions. Words in common usage, to this day, such as samvada, vada, sambhasa, katha, tarka and shastrartha amply attest to and exemplify this.

Student: In other words, we Indians were argumentative from the very beginning?

Student: What happened to us, then? Why are we today so incapable of cordial discussion, let alone civilised debate?

Teacher: That’s what we will come to, what we have to find out. But there is evidence of the closing of the Indian mind many times in our history.

Student: Our history has been marked by periods of terrible despotism and tyranny.

Teacher: Yes, indeed, as has been the case in most great civilisations. But it is not just authoritarianism that is the enemy of conversation. Polarisation and division within society also gives rise to extreme, even unsustainable, positions. A clash of opposites and contraries will produce more heat than light, so to speak.

Student: But isn’t it also the case that even in times of great freedom, such as India’s classical age, the traditions of argument and debate began to be devalued?

Teacher: It is difficult to make generalisations because those ancient times are shrouded in mystery. The historical details and facts are so sketchy that we have very little information outside the texts to make sense of them.

The so-called ahistorical Indian mind is not particularly conducive to contextual elucidation; the text becomes its own supreme source, supplemented, of course, by the long-standing exegetical commentaries or tikas.

Moreover, argumentation and dialectics give way to the darshanas, the more established philosophical systems.

Student: As with the Greeks, who gradually devalued rhetoric in favour of philosophy?

Teacher: Precisely. The sophists, who were known to question, discuss, and argue, gradually began to be discredited as charlatans. The better trained philosophers, with much more rigorous logical methods to back their contentions or conclusions, took over. The homespun and informal Socratic exchanges gave way to academic philosophers.

Student: That’s a new way of looking at it—that dialogue, talking together, can actually be more knowledge-producing and truth-revealing than formal philosophy or highly specialised academics.

Teacher: Thinking together, talking together are not necessarily devoid of logic or reasoning. In ancient times, anvikishi was common to all disciplines. It was a method of finding the truth of things.

Student: We need to relearn and remember the fine art of conversation to make sense of our complex world. But quite often, we engage in pointless debates, verbal jousts, arguments that lead nowhere.

Teacher: In the Nyayasutras, a clear distinction was made between vada, which is the genuine and truthful discussion, and jalpa, the dishonest manipulative argument, and vitanda the combative, aggressive attack. The intention of both jalpa and vitanda is only to trump one’s opponent at all costs.

Teacher: In our ongoing narrative wars, truth is often the first casualty.

Student: So, let me return to the question that I wanted to ask you today.

Last time, we talked about nationalism. You said our nationalism should neither be so thick-skinned that we don’t care what people say about us, nor should it be so thin-skinned that we flare up every time anyone says anything even remotely critical about us.


Svaraj means self-rule, self-control, self-restraint, self-mastery. We regard others as versions of ourselves. Therefore, to torture, harm, or harass them is not our culture. Hindu dharma would never endorse it

Teacher: True. Svaraj should make us rooted in ourselves, self-confident and stable, without being unnecessarily insecure or belligerent. The word Sri Krishna uses in the Bhagavad Gita is yogastha.

Student: What does that mean?

Teacher: It means established in yoga or a state of union with our highest selves, which is what Svaraj also means.

Student: I suppose we’ll have occasion to explore the various dimensions of Svaraj as we go on, but right now, I want to ask you another direct question.

Student: Right now, in India, we see a huge upsurge in Hindu self-assertion. Is that what Hindutva is all about? A proclamation of Hindu power?

Teacher: I am happy that you have asked this very direct question. Let me offer a quick answer now that we’ve already spent a bit of time on the importance of integrity in dialogue.

Student: Yes, I think we need to find out what sort of conversations will lead to finding out the truth, rather than merely acrimony and disorder.

Teacher: Hindus should not, need not, be apologetic. But they don’t have to be aggressive either.

Student: So, just as our nationalism needs to be balanced, so should our Hindutva.

Student: But the charge of “Hindu militancy” or “Hindu terrorism” was mostly false, wasn’t it?

Teacher: That’s what it looks like. It was a bogey, both to balance out and equalise the fact of Islamist terrorism. Moreover, it was political propaganda to discredit BJP and RSS. The other side was so afraid of losing power that they resorted to a disinformation and smear campaign.

Student: Would you say, then, that Hindus can never be terrorists?

Teacher: That is not our tendency. Not just of Hindus, but of Buddhists, Jains, and Sikhs, too. We do not prefer the use of violence to achieve political and strategic ends, but ordinarily resort to it only when other means fail.

Student: If Hindutva or Hindu terror was a false and offensive labelling, what about Hindutva as a form of Hindu supremacism?

Teacher: When we are in power, especially after being underdogs for centuries, there is a natural tendency that we would want to bully others and try to dominate them. But that is not a good idea. Certainly, that is not Svaraj.

Student: Really? What is Svaraj, then?

Teacher: Svaraj means self-rule, self-control, self-restraint, self-mastery. We regard others as versions of ourselves. Therefore, to torture, harm, or harass them is not our culture. Hindu dharma would never endorse it.

Student: That is a very lofty ideal.

Teacher: The ideal remains the ideal; we cannot dilute it. When we must be pragmatic and calculating, we might adapt it to our particular situation. But we cannot renege on it entirely. Svaraj means that we resist colonisation, conquest, and oppression. But it also means that we consciously refrain from conquering, colonising, dominating, and oppressing others.

Else, what is the difference between them and us?

Student: This means that revenge against historical wrongs is out of the question.

Teacher: Recovery, not revenge, would be the objective of an Indian renaissance.

Student: But how to deal with those who do not want to join our narrative, who resist our overtures, who want to divide us from within?

Teacher: We must deal with them firmly, but without succumbing to blood-lust and hatred. Even when we fight with all our might, we have to be totally detached, yogastha.

Teacher: On the contrary, a most necessary and practical one. For Svaraj serves to save not only our souls, but our adversaries’ souls too. n