The Scent of India

Smelling my way through a cultural maze 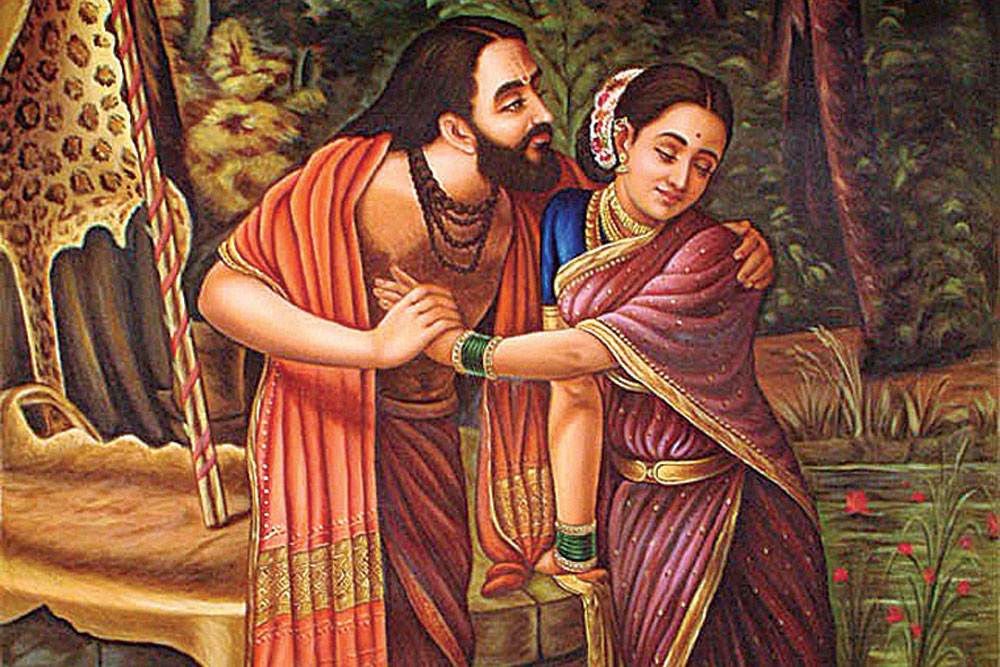 Dushyanta and Shakuntala, oil on canvas


COVID-19 IS MAKING me nostalgic. It’s not possible to travel to India currently, and I would love to be spending some of the monsoon there, preferably in Goa with not much to do. I’m watching films (mostly Bengali, with some Hindi serials and the occasional new film such as Raat Akeli Hai and Gulabo Sitabo, and, of course, Indian Matchmaking and A Suitable Boy) and reading (most notably, The Burning) satisfies the eye and the ear, but the other three jnanendriyas (organs of perception) are missing—the nose, tongue and skin. Film theory has discussed the haptic, or idea of touch, but the nose and the tongue are left aside. While food satisfies the tongue and some of the smell, the other smells of India have to be remembered rather than experienced, even though smell itself is one of the most powerful ways of evoking memories.

I read James McHugh’s fascinating Sandalwood and Carrion: Smell in Indian Religion and Culture (2012) that examines the many texts which comprise a Gandhashastra, which deals with smell in great detail, looking at perfumery and the role of perfume in courts, religious practices as well as the private erotic world, the aesthetic and ethical implications of smells, the use of sandalwood in Buddhism and even sections from the Matangalila (The play of elephants) on elephants and smells. This focus on the Sanskrit cosmopolis will be supplemented by sections in Emma Flatt’s just released book, The Courts of the Deccan Sultanates: Living Well in the Persian Cosmopolis which focuses on the fifteenth and sixteenth century. Smell is shown as part of the good life, the aesthetic and considered life, and the Indian cultural history of smell is a fascinating topic. I wondered about smell today in India.

This topic, of culture and smell, has become a serious subject. The books of Luca Turin and Tania Sanchez, which are ostensibly reviews of perfumes, have introduced many to the idea of perfume beyond just smells, or part of a routine of seduction (they point out that the smell that drives men wild is bacon—or, perhaps, coffee and sambar?), but they show that perfume is an art, often an abstraction of smells, a message, a structure of smelling.

I’m fascinated by these books and by much other writing about perfume but I also like things that just smell nice. Flowers, of course, smell good but so do attars which are often soliflores, that is a single good smell rather than a perfume, notably petrichor and khus, the smell of the cooler in north India, which as vetiver is a key ingredient in many perfumes, suddenly evokes India.

Sandalwood is a dominant smell in homes and in temples, as incense or the burning wood, though it’s a long time since I’ve been able to buy the oil in the Cauvery emporium in Mysore, although they still have incense and sandalwood carvings. Nowadays, Mysore sandalwood is too precious for many Western perfumes where it is often replaced by inferior Australian sandalwood and synthetics. I love Guerlain’s ‘Samsara’, whose name first attracted me to the perfume, but I can’t imagine not filling cupboards and drawers with round cakes of Mysore sandalwood soap from the Karnataka Soaps and Detergents Limited.

McHugh writes wonderfully of the role of garlands in religious practices. Sanskrit courtly literature abounds with the poetics of flowers which evoke colour, season, region, as well as smell. In Kalidasa’s play, Shakuntala, flowers are mentioned in many verses both as part of the description of nature and the use of them as ornaments. It is when Shakuntala is attacked by a bee that flies out from the jasmine that King Dushyanta steps in to defend her. The bee and the flower are such a part of Indian romantic poetry from these ancient lyrics to the Hindi film, where the man is the bee and the woman is the beautiful and fragrant flower.

I miss the old sequence of Hindi film lovers coming closer and closer together as the camera moves away to two flowers touching to represent the kiss. I recall a paper I read as a student about the ‘sniff-kiss’ by Edward Hopkins (1907), where one sniffed the other rather than kissed them with the mouth.

Song lyrics abound with the Urdu words, khushboo and mahek but I can’t think of any (though I’m sure I’ll be told) of many with sugandha and so on. I falsely recalled Vande Mataram referring to the fragrance of India but it does not do so directly.

The only two films I have seen about smell in Hindi—or partly in Hindi—are Aiyyo (2012) and Axone (2020). Both are comedies, the former where a Marathi girl (Rani Mukerji) falls in love with a Tamil boy (Prithviraj Sukumaran) mostly because of his smell. The latter is about the everyday racism faced by a group of Indians from the Northeast who want to cook the dish of axone, which is said to be very smelly because of its fermented soybeans and their neighbours refuse to let them do it. Smelling axone is now one of my tasks when I can go back to Delhi—or, better still, to the Northeast. In Raat Akeli Hai (2020), I recoiled on recollecting the smell of the Kanpur tanneries, which must be one of the most unpleasant things I have smelt.

The smell of the night-blooming jasmine or raat ki rani and the tuberose are among my favourite ‘Indian’ smells, though the former is native to the West Indies and the latter is native to Mexico, while the mallika (jasmine) is found in Sanskrit poetry, associated with the season of summer and Akka Mahadevi’s Mallikarjuna: ‘Lord (Shiva) as white as jasmine’.

I have never smelt ichor, the fluid of rutting elephants, but it is said to smell sweet and attract bees. Ganesh’s elephant head is often described as surrounded by bees. Bhavabhuti’s play, Malatimadhava, composed in the eighth century, comes with an invocation to Ganesha:

When Shiva dances and Kumara’s peacock, drawn by the exultant thunder of Nandi’s drum,
Has sent the frightened Snake King spiralling into his trunk,
May Ganesha’s frantic head-shakings which make the heavens buzz
With bees that swarm from his temples, long protect you.
(Translation by Michael Coulson, Three Sanskrit Plays)

Before I first went to India, at the end of my first year of studying Sanskrit, I read Kalidasa’s Raghuvamsha (The Lineage of Raghu). In Canto IV, Raghu’s digvijaya (conquest of the regions) of India described the country in a very different way from his Meghaduta (The Cloud Messenger). It has evocative descriptions of the country, often evoking its smells. Lakshmi holds a lotus-umbrella over Raghu, who is compared to the mango fruit as distinct from his father, the mango blossom. The canto begins with the lotuses and kasha flowers of autumn and the beauty of lotus lakes, while Raghu’s war elephants produce excessive ichor as they compete with the smell of the saptaparna blossoms. Raghu marches first to the east, through forests of palms and betel trees, then to the south where his elephants perfume the Kaveri with their ichor. The army crosses the southern mountains fragrant with pepper, cardamom and sandal trees. In Kerala, an inversion occurs as the women’s usual saffron hair powder is replaced by the dust kicked up by the soldiers, while the latter are covered with the pollen of the scented ketaka flowers carried in the wind. The bees abandoned the punnaga flowers, preferring the sweet smell of the elephants’ ichor, while in the north, the soldiers sit on stones perfumed by the navels of musk deer.

Bad smells are also culturally marked. Some are hated by all whereas others are controversial, being markers of group identities. These can erupt into serious conflicts as people talk of ‘the Other’ as smelly. In India, the smell of meat cooking is mouthwatering for some but hateful for others. Brits aren’t too sure about the smell of frying garlic, which I like to smell but don’t like to eat. I love the smell of hing but it’s called asafoetida or ‘stinking grain’ in English while kala namak (rock salt), even in chaat masala but especially in jal jeera, is banned from our house, about the only thing my husband refuses to eat. Methi (fenugreek) smells good in food but I don’t like the smell of it transferring from currency (smell it!) to my wallet. Fishy smells are always problematic even for fish eaters. I remember the horrible smell at Somnath and I grew up next to a fishing town. In the Mahabharata, a woman is called Matsyagandha (she who smells of fish), but Sage Parashara gives her the fragrance of musk and so she is known as Yojanagandha (she whose fragrance spreads for miles) as well as Satyavati (the mother of Vyasa.) So I recall the smells that evoke India. My dominant recollection of the smell of Delhi is winter. Less the burning fires but running the risk of asphyxiation from the naphthalene balls that have been keeping precious winter woollens safe. Many people say Mumbai smells bad but I love flying into the city and the way the smell of the sea, methi and warmth fill the plane even before the doors are opened. How can you not love a city which calls what, I think is a stinky drain, ‘Love Grove Pumping Station’? But Mysore is the most fragrant with sandalwood, pepper, cardamom, coffee as well as the ghee of Mysore pak and the Mysore dosas, perhaps at Mylari…. Let’s hope this Covid is over soon.