He was a man possessed against his former IPL team 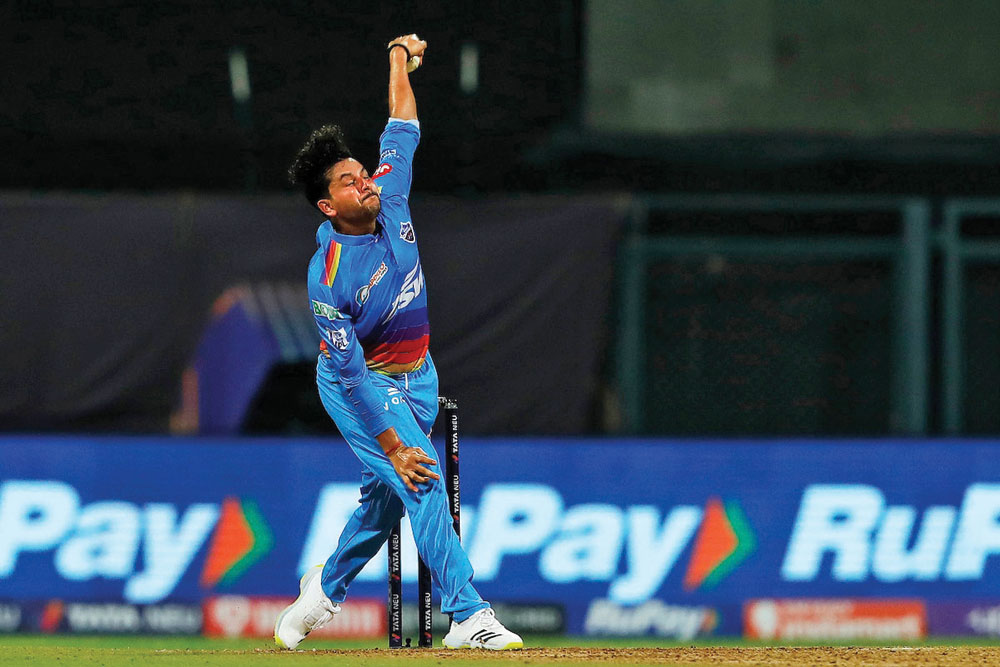 
IT WAS DELHI versus Kolkata in the Indian Premier League (IPL) and for Kuldeep Yadav it was a battle within a battle. Kuldeep was with Kolkata Knight Riders (KKR) the last few years and things hadn’t gone well for him. Benched on occasions, he had also lost his spot on the Indian T-20 team. The wickets at the Eden Gardens did not suit him and all of a sudden India’s most promising spinner seemed to have lost his sting. He was released ahead of the auctions and was no longer a star draw. Delhi picked him up at base price and when compared to some of the other auction buys, it was certainly a downer for him. Add the surgery, which had kept him out of cricket for six months and it was evident Kuldeep was going through the lowest he had for a while.

But that’s the beauty of sport. It allows you to both win and fail in public. Kuldeep had failed his fans at KKR and had suffered in the process. The injury did not help either. He was being tested in every sense. And that’s when he had to dig deep. Stay resilient. Put in the hard yards. Train in silence and get battle-ready. He did. And against KKR it all came out in a torrent. Shreyas Iyer, the KKR captain, chased a wide one from Kuldeep and got a bottom edge. The ball stayed low and so did Rishabh Pant. It was a spectacular take just inches from the ground. For Kuldeep, it was redemption. Pant had shown faith in his premier spinner right through the competition and there he was paying back with yet another match-winning spell of four wickets in four overs.

This was happening the second time in weeks and no one could call it an aberration. It is said that if one wants something really badly one does get it. Kuldeep Yadav against KKR was a man possessed. From picking up skipper Shreyas Iyer to holding on to one of the most difficult catches he will take this IPL, it was tremendous to see Kuldeep back at his passionate best. Make no mistake, the comeback was hard. Being dropped from the Indian team made it even harder. And when he suffered the injury, it was as if things were all going south for Kuldeep. The operation meant he was out for a good few months and mentally Kuldeep was struggling. He had to figure out how badly he wanted it all and how much he was willing to work for it. Kuldeep ticked all these boxes and worked on his action also. And when he was picked by Delhi for `2 crore, he knew he had to do something special to make it back as India’s premier spinner. So far, he has. The early signs are all good and if Kuldeep can continue in this vein, it could well mean he has staked a claim for inclusion in the World T-20 in October.

Up until the 2019 World Cup, things were all looking perfect for Kuldeep. Following up on a dream debut, Kuldeep had performed consistently well each time Virat Kohli had thrown him the ball. In fact, he had only got better. One man who knows Kuldeep well and has followed his progress from up close is Australian bowler Brad Hogg whom, Kuldeep claims, he has learnt a lot from while sharing the dressing room in IPL. “He is an intelligent bowler to start with and always wants to pick wickets and that’s the key to success in short-form cricket. As s spinner he will go for runs on occasions but that should never make him a defensive bowler,” explained Hogg.


Touted as India’s premier spinner in Sydney after his five-wicket haul in January 2019 to being left out of the team, Kuldeep has seen it all. In the process, he has hardened. He now knows what it is like to fail. This is Kuldeep Yadav 2.0. A confident Kuldeep can be India’s USP in the World Cup

Kuldeep, his recent reversals notwithstanding, has a promising career in front of him. And given that the 2022 World Cup is in Australia where the grounds are bigger than in England, he might offer Rohit Sharma and Rahul Dravid a better option as a wrist spinner. But to eventually make that happen, he needs to mesh ability with temperament in the next two months. Keep doing well in IPL and in the series to follow. The early signs, we all agree, are good. But whether he can go on and all of the other questions for the future are too difficult to answer at this point. What is heartening to see is Delhi and Rishabh persisting with Kuldeep in the most difficult situations of the game. The more he bowls in tough situations, the more he will get back to being the bowler he was. And with confidence he will surely add new skills to his range, skills India can do with in Australia in October.

Someone like Kuldeep Yadav has to be handled well; given the confidence to deliver for his team. Nurtured and protected on occasions. That’s what Rishabh Pant has been able to do for the Delhi Capitals. With men like Pant and David Warner in the dressing room, Kuldeep now has the support he desperately needs in his comeback bid. In the last couple of years he has faced a lot of sting from former cricketers and commentators. While some have said that he is bowling a little too slow, others have complained about his action and release point. When things don’t go right for you, everything you do appears problematic. It was the same for Kuldeep. In his passion for painting he managed to find a different domain to channel his energies. Keep his focus away from cricket for a while. It was important during his rehab that he could distance himself from the sport and recalibrate. It was this period of rediscovery that has helped Kuldeep Yadav this IPL. Close on Yuzi Chahal’s heels in the race for the purple cap, Indian cricket seems to be going back to Kul-Cha again.

Touted as India’s premier spinner in Sydney after his five-wicket haul by coach Ravi Shastri in January 2019 to being discarded and left out of the team, Kuldeep has seen it all in the last few years. And in the process he has hardened. He now knows what it is like to fail. To face criticism and ignominy. To stay away from the pub­lic glare when people aren’t interested in you anymore. This is Kuldeep Yadav 2.0. What we now want to see in Kuldeep is the consistency of 2018-19. And that can only happen with more and more matches under his belt. A confident Kuldeep can be India’s USP in the World Cup. It is now on Rohit and Rahul Dravid to make the best use of him hereafter.