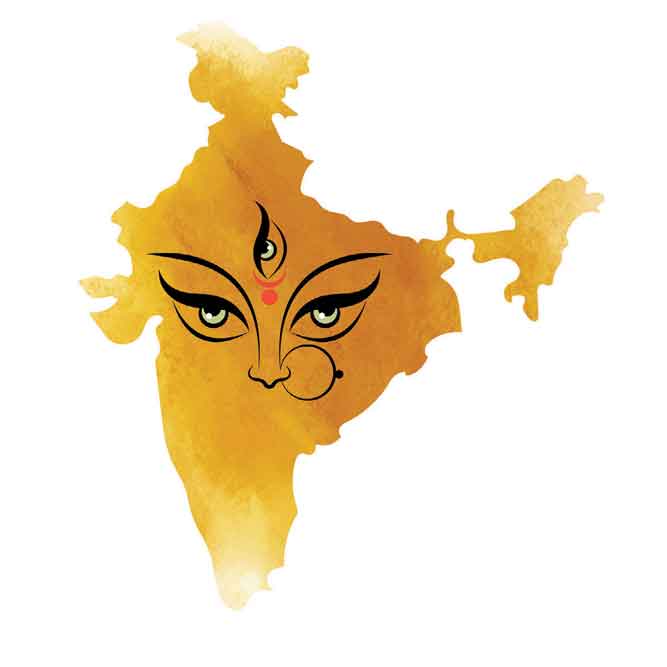 In each case, there is a location and there is Devi’s name, or form, in that location. The first entry is the location, the second is Devi’s name. Except for Varanasi, where we are told that Devi’s face fell, in the other locations, there is no mention of the specific limb. This is a list from Devi Bhagavata Purana. As I have said, there are different lists in different texts. For some of the names in this list, the geographical identification is easy, such as Varanasi or Mathura. But something like Devadaru-vana could mean any forest that has devadaru trees. In passing, the number 108 is of course sacred and it is natural that such a listing should have 108 Shakti Peethas. I hasten to add that there are other lists too.

Many people quote Brahmanda Purana and say that it mentions 64 Shakti Peethas. My edition of Brahmanda Purana does not say anything about the 64 Peethas.  But right towards the end of Brahmanda Purana, there is a section known as Lalitaa mahatmya, the greatness of Lalitaa.  Lalitaa is one of Devi’s manifestations. In this section, right towards the end of Brahmanda Purana, there is a section on nyasa.  Nyasa means the mental appropriation of different divinities to different parts of the body. When it is only done on parts of the hand, it is called kara-nyasa. When it is done on limbs of the entire body, it is called anga-nyasa. This part of the text states that this nyasa should be done with 51 Peethas. We therefore have a list of 51 Peethas. (1) Varanasi; (2) Kamarupa; (3) Nepala; (4) Poundravardhana; (This clearly means what was Bengal then and includes today’s Bangladesh. Anything beyond that, such as the identification with Pandua in West Bengal, is speculative. But evidently, there used to be a Shrinkhala Devi temple in Pandua once, now destroyed.) (5) Varasthira; (6) Kanyakubja; (7) Purnashaila: (8) Arbuda (Mount Abu); (9) Amratakeshvara; (10) Ekamra (Bhuvaneshvara); (11) Trisrota (somewhere along Ganga); (12) Kamkoshtakam; (13) Kailasa; (14) Bhrigunagara; (15) Kedara; (16) Chandrapushkara (Pushkara); (17) Shripeetha; (18) Ekavira; (19) Jalandhra (Jalandhara); (20) Malava; (21) Kulanna; (22) Devikota; (23) Gokarna; (24) Maruteshvara; (25) Attahasa; (26) Viraja; (27) Rajaveshma; (28) Mahapatha; (29) Kolapura; (30) Kailapura; (31) Kaleshvara; (32) Jayantika; (33) Ujjayini; (34) Chitra; (35) Kshiraka (Kshiragrama, in West Bengal); (36) Hastinapura; (37) Udira; (38) Prayaga; (39) Shashti-mayapura; (40) Gourisha; (41) Salaya; (42) Shrishaila; (43) Maru; (44) Girivara; (45) Mahendra; (46) Vamana Giri; (47) Hiranyapura; (48) Mahalakshmipura; (49) Purodyana; and (50) Chhayakshetra. Though the text states that there are 51 Peethas, if you count, only 50 Peethas are mentioned. It then says that the nyasa must be performed according to the due order of letters in the alphabet. Hence, there is a connection between 51 letters and 51 as the number of Shakti Peethas. As was the case earlier, some in this list of 51 can easily be identified today. For the others, it is not that easy.

The notion of Shakti Peethas evolved over time and numbers changed, from four to 18 and 51. There are tantra texts of much later vintage, say 500 years ago. Tantrachudamani is an example of this.  This has a section on determination of Peethas, where Devi herself speaks about 51 Shakti Peethas, the parts of her body that fell down after being severed by Vishnu’s chakra, and the Bhairava (Shiva) who has established himself in these places. The table below compiles this information. Lists vary according to texts. Any place mentioned was, and probably still is, associated with Devi’s worship. That is all that matters.