The Power of Rudraksha

The Shiva Purana and the quest for liberation 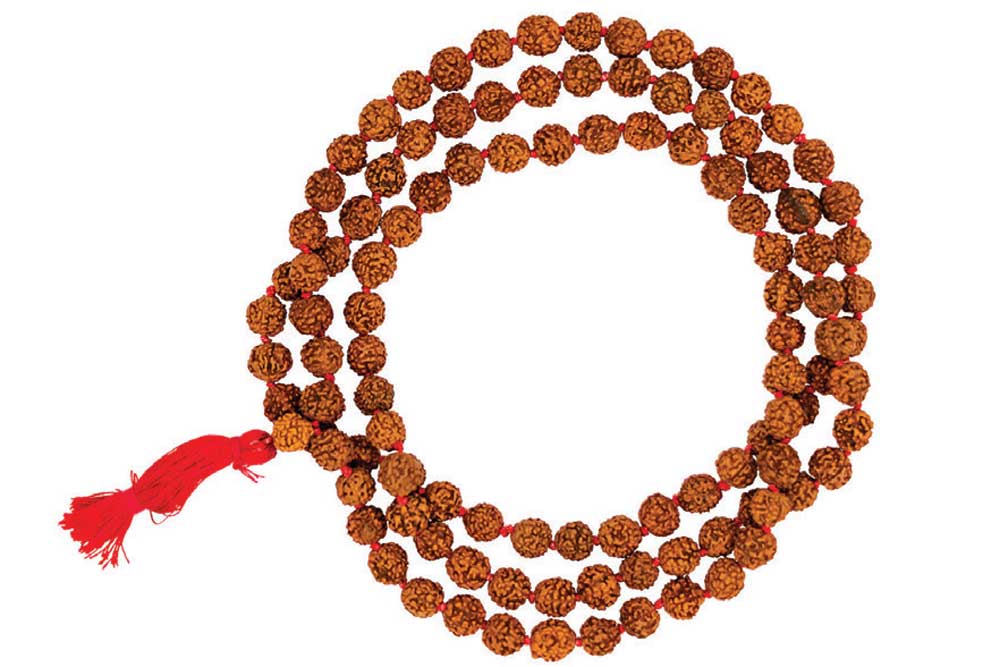 I AM TRANSLATING THE Shiva Purana now. These days, I find a lot of people wearing rudraksha beads. Understandably, Shiva Purana has quite a bit on rudrakshas, much of which may not be generally known. In the Shiva Purana, it is Shiva himself who told Parvati about rudrakshas.

Shiva said, ‘O Devi! Listen to the greatness of rudraksha. Out of my love for you and desiring the welfare of devotees, I am telling you about it. In earlier times, I observed austerities for thousands of divine years. (The years of gods are different from those of humans.) Though I controlled myself, my mind was agitated. As Paresha, in my self-possessed form, I desired to benefit the worlds. Hence, in my sport, I opened my eyes. From my beautiful half-open eyes, drops of tears fell down. From those drops of tears was born the tree known as rudraksha. (Literally, Rudra’s eyes. Rudrakshas are seeds of the tree Elaeocarpus ganitrus.) To show favour to my devotees, they became stationary. They were given to Vishnu’s devotees and to the four varnas. Rudrakshas grown from the ground in Gauda (The region around Bengal.

The capital of Gauda is now in Malda district) are loved by Shiva. They are also grown in Mathura, Ayodhya, Lanka, Malaya, Mount Sahya, Kashi and other places. The shruti texts have said that they can shatter heaps of sins that are intolerable to others. Rudrakshas are auspicious. Following my command, rudrakshas from earth have been classified into the categories of brahmanas, kshatriyas, vaishyas and shudras. The learned know that the respective colours for these are white, red, yellow and black. Men should, respectively, wear the rudraksha that corresponds to their own varnas. Those who desire fruits will obtain the fruits of objects of pleasure and emancipation if they wear rudrakshas according to varna. Since Shiva is always pleased with them, this is particularly true of Shiva’s devotees.’

‘One that is of the size of a dhatriphala (the myrobalan amalaka) is said to the best. The one that is of the size of badariphala (fruit of the jujube tree) is spoken of as medium. One that is inferior is the size of chanaka (chickpea). Even if it is the size of a badariphala, it yields fruits in the world, ensuring happiness and the enhancement of good fortune. The one that is the size of a dhatriphala destroys every kind of harm. That which is like gunja (a shrub that has a red blackberry), achieves fruits in every kind of attempt. The lighter it is, the greater the fruits bestowed by it. The learned say that a fruit which is one-tenth in weight is the best. (One-tenth of what is not clear.) The wearing of rudraksha is said to lead to the destruction of sins. Since it ensures success in every endeavour, it must certainly be worn. Nothing else is seen in the world that is as auspicious in bestowing fruits as rudraksha. There is nothing as effective as such a mala. Rudrakshas are auspicious if they are even, glossy, firm, large, without spikes and well-formed. Then they always yield desired objects of pleasure and emancipation. There are six kinds of rudraksha that must always be avoided—defiled by worms, cut, broken, without protrusions, with sores and the ones that are not circular. That which has a natural hole from one end to the other is excellent. When the hole has been carefully bored by humans, it is middling. As a consequence of wearing rudraksha, great sins are destroyed.’


‘If a person is not liberated through dhyana and jnana, he must wear rudraksha. He is freed from all sins and attains the supreme destination. When a person performs japa with a mantra, the auspicious qualities become one crore times more if he wears a rudraksha’

‘If a man wears eleven hundred rudrakshas, his form becomes like that of Rudra. If eleven hundred rudrakshas are worn, the fruits are such that it is impossible to describe those fruits even in one hundred years. It is held that a coronet shall be made out of five hundred and fifty. A virtuous, devoted and excellent man will make three strings with rudrakshas, each string consisting of three hundred and sixty beads. Full of devotion, such a supreme upavita will be made out of rudrakshas. It is said that three rudrakshas must be worn on the tuft of hair, and on the left and right ear, six each. One hundred and one must be worn around the neck and eleven must be worn on each arm, elbow and wrist. Men who are devoted to Shiva wear three on the upavita. Finally, it is held that five must be worn around the waist. If a person wears that many rudrakshas, his form is like that of Mahesha and everyone prostrates before him. When such a person is seated in dhyana, people say, “He is Shiva” or “He is Hara”. When they see him, they are freed from all their sins. This is said to be the norm when there are eleven hundred rudrakshas. If that many are not available, there is another auspicious procedure. I will speak about that. (This must be an independent statement. Even if one assumes there are three strings in an upavita, the number just described falls slightly short of one thousand.) One rudraksha must be worn on the tuft of hair, thirty on the head, fifty around the neck, sixteen on each of the arms, twelve on each of the wrists and five hundred on the shoulders. A mala or upavita will be fashioned out of one hundred and eight. In this way, a person who is firm in his vows will wear one thousand rudrakshas. When his mind is like that, he is like Rudra himself and all the gods bow down before him. One rudraksha on the tuft of hair, forty on the head, thirty-two around the neck, one hundred and eight on the chest, six in each of the ears and sixteen on each of the arms. Depending on the size of the wrist, double that number (thirty-two) can be worn on the wrist. When a person happily wears this number, he becomes Shiva’s great devotee. He becomes like Shiva and is worthy of worship. All the others look at him and worship him.’

‘It must be worn on the head with a mantra to Ishana. It must be worn on the ears with the mantra to Tatpurusha (Rudra-Mahadeva gayatri). It must be worn around the neck and also on the chest with the mantra to Aghora. An intelligent person will wear it on the wrist with the bija mantra to Aghora. A string fashioned out of fifteen rudrakshas will be worn around the stomach, with a mantra to Vamadeva. Three, five or seven malas can be worn with the panchabrahma mantra. Alternatively, all the rudrakshas can be worn with the mula mantra (the basic mantra of Aum Namah Shivaya). Liquor, flesh, garlic, onion, the shigrum (horse radish), shleshmataka (fruit of Cordia Latifolia, a medicinal plant) and vit-varaha (the village pig) must be avoided. It is recommended that a brahmana should wear a white rudraksha, a kshatriya should happily wear a red rudraksha, a vaishya should wear a yellow rudraksha every day and a shudra must necessarily wear a black rudraksha. Irrespective of varna and irrespective of whether one is a householder, resides in the forest, or is a mendicant, this secret and supreme rule must be followed and must not be violated. If one desires the auspicious, one should not wear one that is smaller than an amalaka in weight, is broken, has protrusions, has been bitten by worms, has undesirable holes or is inferior in any way. A rudraksha that is the size of a chickpea must be avoided. Rudraksha is a subtle form of my lingam and is always praised. Following Shiva’s command, all the ashramas and varnas, women and shudras, should wear it. If he wears it in the morning, he is freed from all sins committed during the night. If he wears it at night, he is freed from all sins committed during the day. This is also true of morning, mid-day and evening. In this world, those who wear tripundraka, matted hair and rudraksha, do not go to Yama’s world.’

‘Thus, rudraksha destroys all sins. Those who wear it are loved by me and are pure. O Parvati! Even if such a person has committed sins, he is purified. A person who wears rudraksha on his hands, arms and heads cannot be killed by any being and roams around the earth in Rudra’s form. He must always be worshipped by all the gods and asuras. Since he destroys the sins of anyone who sees him, he is worshipped like Shiva. If a person is not liberated through dhyana and jnana, he must wear rudraksha. He is freed from all sins and attains the supreme destination. When a person performs japa with a mantra, the auspicious qualities become one crore times more if he wears a rudraksha. If a man wears it, he obtains good merits that are ten crore times more. O Devi! As long as a living being wears it on his body, till such time, he is protected against untimely death. Wearing a mala of rudraksha, a devotee should perform japa with all the mantras. Devotees of Vishnu and other devas also wear rudraksha without any hesitation. In particular, devotees of Rudra always wear rudraksha.’

I will have more to say on rudraksha in the next column.